Married Americans more likely to look up exes than singles

Americans who are married or in relationships appear to be more wistful about their exes than those who are single.

A new study by British drugstore Superdrug looks at the social media stalking behavior of Americans and Europeans, examining how frequent — and how in-depth — their stalking gets.

One of its most interesting findings concerns just how much people are prone to checking up on exes online: According to their research, people in the US who are married or in relationships are more likely to click over to their exes’ social media pages than those who aren’t committed to anyone.

Surprising: A new survey looks at social media stalking behavior, and found that 56.5% of single Americans stalk their exes, compared to 65.8% of married people

Of those surveyed, just 56.5 per cent of single Americans admitted to stalking their exes on social media at least occasionally, with most doing so once a month or less.

On the married people polled, however, 65.8 per cent said they check up on old boyfriends and girlfriends, and 66.7 per cent of those in a relationship answered the same way.

What’s more, none of the single respondents admitted to checking an ex’s profiles more than once a day — but a small percentage of attached people did.

(Over in Europe, it looks less bleak for married people: The study found more singles did the ex-stalking than people who were married or otherwise attached.) 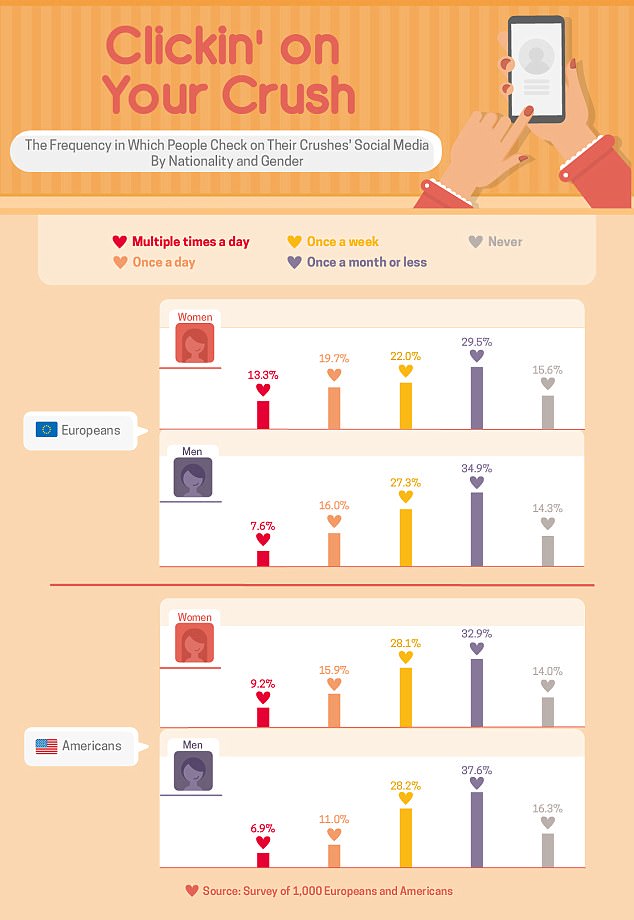 Genderless: Men and women seem to do about the same amount of social media stalking

The rest of the survey looked at how people stalk their crushes, not their exes. Interestingly, American men and women harboring romantic feelings for someone else are about equally likely to stalk them online — with just 16.3 per cent of men and 13 per cent of women saying they ‘never’ do.

Women, however, are slightly more likely to stalk more frequently.

And what does this stalking entail, exactly? According to all 1,000 people surveyed (both Americans and Europeans), the most frequent examples are looking at a crush’s social media pages for a couple of minutes (73.7 per cent), adding that crush as a friend or following them (32.1 per cent), and looking at that crush’s friends’ profiles (29.7 per cent).

About a quarter of participants admitted to sending their crushes a message and looking at their pages for more than 15 minutes. 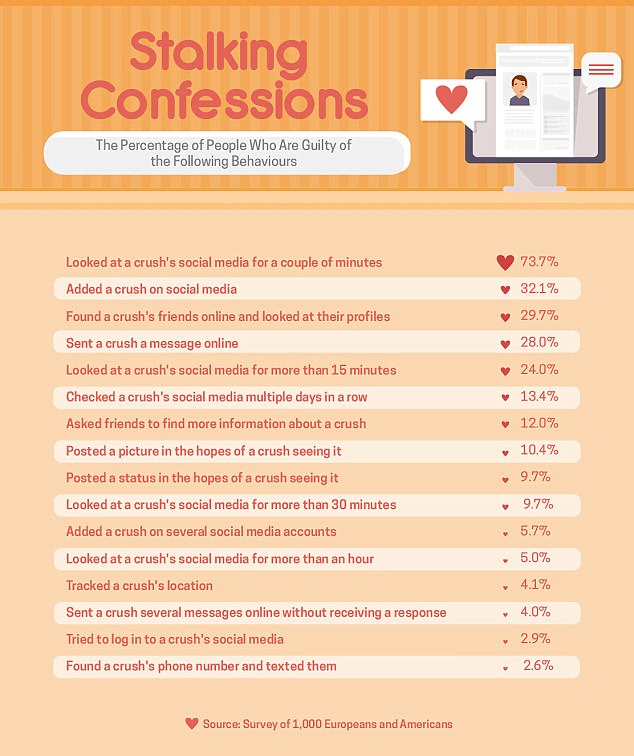 Popular: The most common types, when it comes to staking a crush, are looking at social media pages and sending a message

Sometimes, all this online research can have some embarrassing results. While a quarter of Americans polled said they’d confessed to a crush that they looked at their pictures, 10.4 per cent said they accidentally mentioned information they found out online.

That number is even higher across the pond, with 24.2 per cent of Europeans unintentionally letting things slip.

But how ‘creepy’ are these behaviors, really? Respondents were also asked to rank the creep factor of certain stalking behaviors from 1 to 10 to find out. 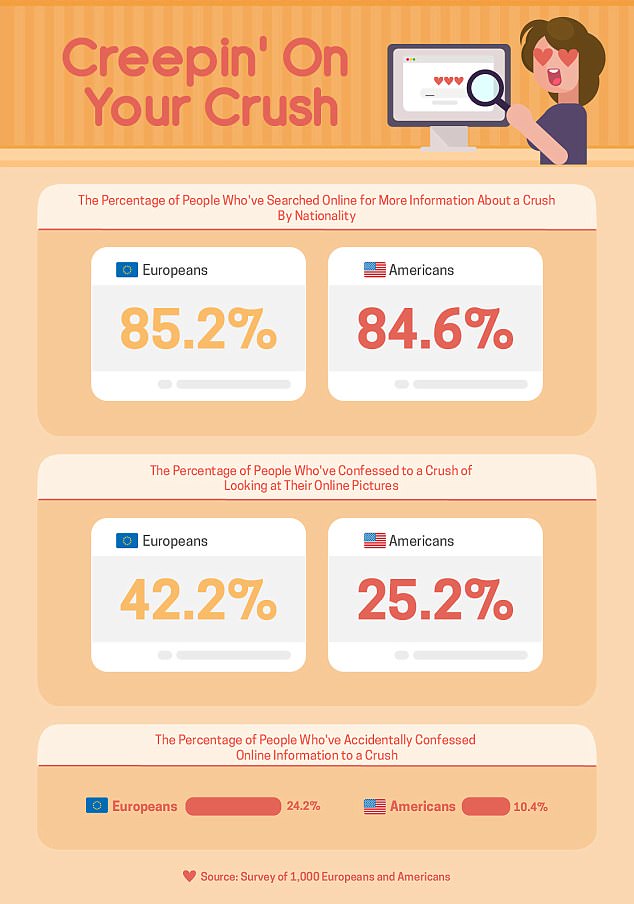 Whoops! Europeans are much more likely to confess to a crush that they looked at their pictures — and accidentally admit to knowing too much It’s all there: Facebook is still the most popular tool for adults stalking online

In the US, both men and women said that someone ‘trying to log into your social media accounts’ was the most creepy thing — yet women rated that at just 6.6 on a scale of 1 to 10, and men just a 6.4.

Also found to be above-average creepy by both sexes is having someone track your location, find out where you will be and pretending to run into you, and finding your number to text you.

Women found it creepier when men send them multiple messages without a response, a warning some men may want to take heed of.

Neither sex appeared to find it too creepy when others look at their social media profiles for an extended period of time, send messages, or post something with the intention of someone specific seeing it.

People found it the most creepy to attempt to log into another person’s social media accounts — but surprisingly only rated it 5.7 to 6.6 on a scale of one to ten