A Russian businesswoman masterminded a terrifying raid on her married British lover’s home that saw his wife and daughter tied up, a court heard.

Tycoon Robert McKendrick, 57, had a five-year affair with Karine Solloway, 59, during which time she lent him more than £1million to help his ailing business, a jury was told.

But following a bitter break-up, it is alleged she recruited a gang to recoup the money by robbing his home in the upmarket Cheshire village of Alderley Edge. While Mr McKendrick was away in Africa, his wife Priya and 17-year-old daughter were subjected to a ‘prolonged and serious robbery’ by three men who all wore black, Chester Crown Court heard.

Andrew Ford, prosecuting, said their hands were bound with plastic cable ties and their eyes were covered with blacked-out goggles. Cling film was stretched over Mrs McKendrick’s face.

Karine Solloway, 59, is alleged to have had an affair with Robert McKendrick, 57

Mr Ford added: ‘They were shepherded about and made to kneel on the ground.’

In the alleged attack on October 6 last year, Mrs McKendrick was alerted by her daughter screaming in another room.

Ringleader Paul Prior, who has admitted conspiracy to rob, revealed he knew Mr McKendrick had business interests in Africa and had debts.

‘[Prior] said they were there for the money. He was accusing Robert of having transferred his assets to Priya,’ Mr Ford added.

When some stolen property was traced back to Prior’s London address via his eBay account, police found phone conversations revealing he been in contact with Solloway.

Mr Ford said: ‘Messages between Solloway and the ringleader Prior show that she was part of it, she backed it and she was crucial to the recruitment of his team to carry it out.’ The court was told Mr McKendrick had business interests, including rice growing, in Sierra Leone and Liberia – but one venture resulted in financial dispute and legal proceedings. His worldwide assets were frozen.

Mr McKendrick had been ‘leading a double life’ after starting an affair with Solloway, who he met at a Russian Embassy party. 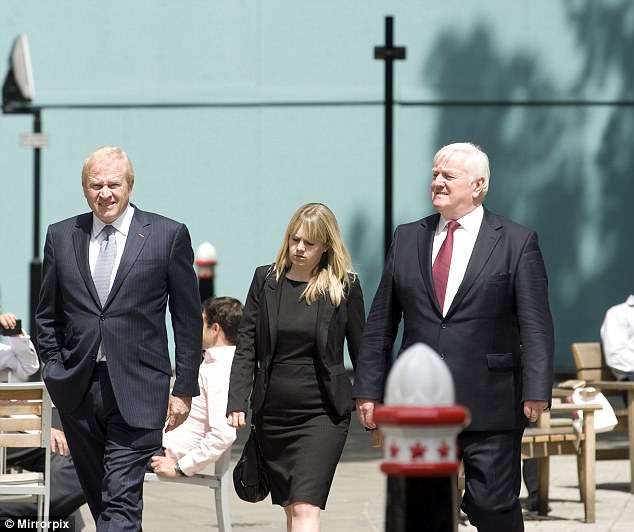 Following a bitter break-up, it is alleged McKendrick recruited a gang to recoup the money by robbing his home in the upmarket Cheshire village of Alderley Edge

Mr Ford said: ‘In 2010 he began an affair with Solloway. During that time Mr McKendrick kept up appearances at the family home in Alderley Edge as if everything was normal.

‘He spent much of the week with Solloway and the weekends at home. Mr McKendrick’s African businesses ran into difficulty and there was serious litigation.’

Eventually Mr McKendrick ended the affair and ‘it went bitter’. Solloway claims he promised to give her a family and pledged he would leave his wife for her.

But they ‘fought in drink,’ and their relationship ended in acrimony. He returned to his wife and Solloway later told police that he was a ‘coward’.

Since the affair, his business declined and, by the time of the alleged, plot divorce proceedings were under way between Mr McKendrick and his wife, who have three children.

Prior and another man, Ian McGarry, have previously admitted conspiracy to rob.

Phone conversations showed Prior and Solloway discussing the robbery’s proceeds, Mr Ford said. They also reveal how Prior recruited Kimpton Mativenga, specifically for his ‘muscle’.

Solloway, of London, and Mativenga, 31, of St Albans, Hertfordshire, both deny conspiracy to rob. The case continues.