Massive 4-foot, 50-pound bone from a Columbian mammoth is discovered by divers in a Florida river

A pair of divers uncovered a giant mammoth femur on a scuba trip in Florida.

The four-foot leg bone was preserved in the sediment at the bottom of the Peace River, about 55 miles from Sarasota.

Roaming the area during the Pleistocene era, between 2.6 million and 10,000 years ago, Columbian mammoths could reach 13 feet tall and weigh over 10 tons.

The divers, both amateur paleontologists, believe the femur is from a mammoth that died about 100,000 years ago.

Peace River is known for its many fossils: The pair also found a tooth belonging to a saber-tooth tiger on the same expedition.

Henry Sadler holds up a 50-pound femur belonging to a Columbian mammoth. He and friend Derek Demeter uncovered the bone while scuba diving in southwest Florida’s Peace River

Derek Demeter and Henry Sadler found the 50-pound bone on one of their regular scuba-diving trips.

On an April 25 expedition in the Peace River in southwestern Florida, Sadler came running over and told Demeter he’d found something ‘amazing.’

It was a four-foot femur belonging to a Columbian mammoth, a distant relative of the Asian elephant that inhabited Florida during the Pleistocene era, between 2.6 million and 10,000 years ago.

‘When I saw it, I couldn’t believe it. I was in denial,’ Demeter, planetarium director at Seminole State College, told the Orlando Sentinel. ‘It was really neat to see that be discovered.’ 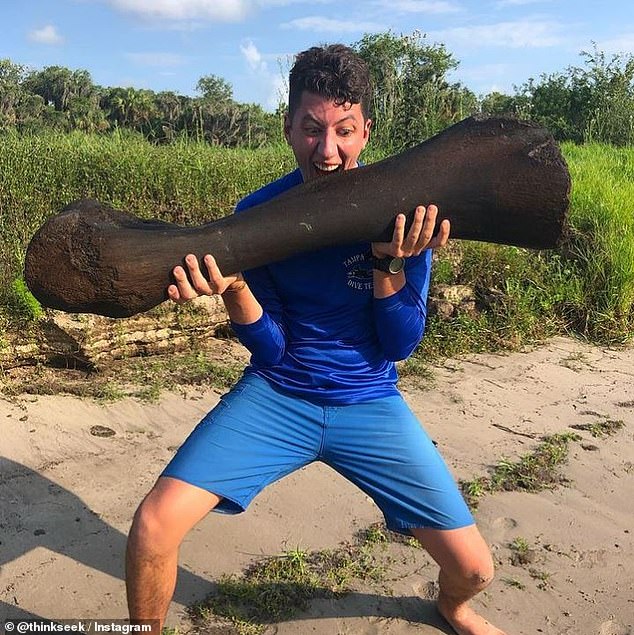 Derek Demeter (pictured) estimates the bone is about 100,000 years old. Columbian mammoths inhabited Florida during the Pleistocene era, between 2.6 million and 10,000 years ago

In addition to being avid divers, both Sadler and Demeter are amateur paleontologists.

‘It weighs a ton but [it’s an] incredible discovery!’ Demeter wrote on social media.

The bone was well preserved, he told Fox 35, because it had been buried under the sand in the riverbed.

Radiocarbon-dating hasn’t been conducted on the femur yet, but due to its density, Demeter theorized it was approximately 100,000 years old.

Growing up to 13 feet tall and weighing more than 10 tons, the Columbian mammoth was one of the largest mammoth species.

It roamed the Western Hemisphere from the northern United States down to Central America.

Mammoths, along with most Pleistocene megafauna, began going extinct about 14,000 years ago.

While they overlapped with the first humans in North America for several thousand years, it’s not clear if climate change, overhunting or other factors led to their extinction.

Most of the remains the duo have found have been contemporary, Demeter told the Sentinel: He and Sadler have turned up scallop shells. shark teeth and even stingray spines. 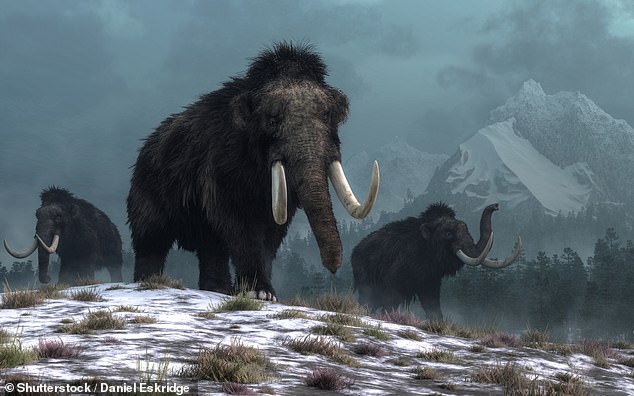 Growing up to 13 feet tall and weighing more than 10 tons, the Columbian mammoth was one of the largest mammoth species. Experts are unsure if overhunting, climate change or some combination of the two led to their extinction some 10,000 years ago

‘When you uncover this fossil and realize there were these giant, elephant-like creatures roaming around what was probably once a grassland in Florida, it gives you a sense of wonder for what it was like back in ancient times,’ he said. ‘It’s kind of like our way of time traveling. It makes your imagination go wild.’

The Peace River is a popular destination for fossil hunters, who have reported finding megalodon teeth and bones from giant armadillos and sloths in its waters.

The same day they found the mammoth leg, Sadler also unearthed part of an extinct shark and a tooth belonging to a saber-tooth tiger. 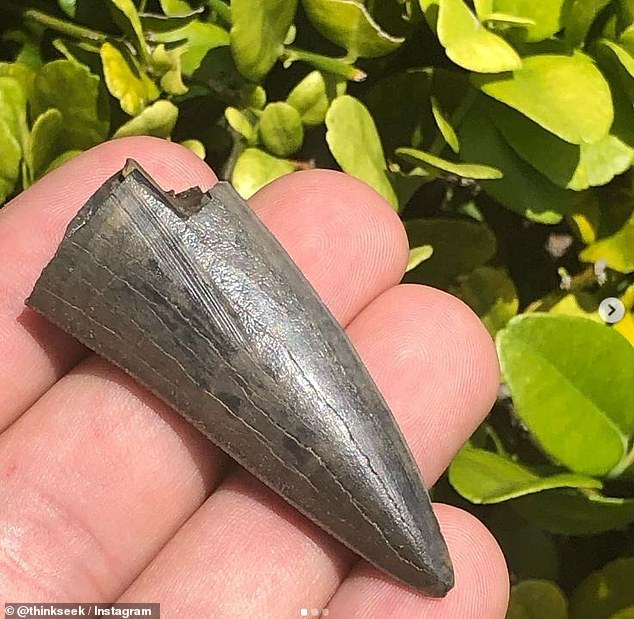 The Peace River is a popular destination for fossil hunters: The same day they found the mammoth leg, Sadler also unearthed the top third of a saber-tooth tiger’s fang

‘There’s only the top third of it, so it’s missing quite a bit,’ Sadler wrote on Instagram. ‘It’s a once-in-a-lifetime find, as is the mammoth leg bone. Derek and I seem to be pretty lucky together.’

Sadler, a middle-school teacher, previously found other mammoth bones in the river, including vertebrae and part of a jaw.

He donated those specimens to the Florida Museum of Natural History, but he’s using the leg bone as a teaching aid.

‘It’s currently sitting in the classroom where the kids are able to see it, touch it, feel it and really get a history of the natural world,’ Sadler said. ‘They’ve heard about saber-toothed tigers and actually finding a piece of one of those animals and bringing it to life for those kids; it’s just awesome.’