‘I would very much like to stay here’: Maurizio Sarri admits he is still not sure if he will be at Chelsea next season despite sealing return to the Champions League

Maurizio Sarri has admitted his future at Chelsea remains uncertain, despite leading the club back into the Champions League.

The Italian has struggled to successfully instil his ‘Sarri-ball’ style on the Premier League, leading to calls from the Chelsea fan base to see him shown the door.

However, Sarri has guided them back to Europe’s top table with a third-place finish this season and they have the chance to win the Europa League against Arsenal in Azerbaijan.

Maurizio Sarri has admitted his future at Chelsea remains uncertain, despite a top four finish

There was much uncertainty around the manager’s position last summer when Antonio Conte was eventually sacked and it appears there has been no concrete decision made over Sarri’s future just yet.

When asked if he would be at the club next season, the 60-year-old said: ‘I think so, but I am not sure. I can say only that the club asked me for the Champions League, and we reached the target.

‘As you know very well, I love English football. I love the Premier League; it’s fantastic and the level is the best in the world, I think. The atmosphere in the stadiums is wonderful. I would like very much to stay here.’

Chelsea finished their season with a drab 0-0 draw away at Leicester on Sunday but Sarri remained upbeat, describing their campaign as ‘very good’. 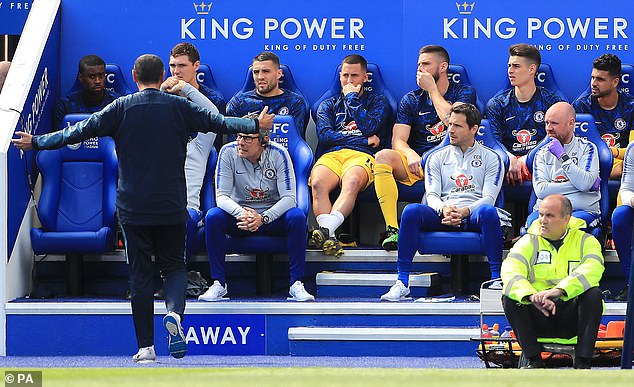 He added: ‘The season was really very difficult for us. But I think at the end we are happy because we were in trouble three months ago, but were able to react very well.

‘In the end we are in the third position and reached the target of the club – the Champions League.

‘Now we have to play a very important match, the final in the Europa League. At the moment the season is very good, but the season can become wonderful.’