An MCC member was thrown out of the Lord’s pavilion yesterday after he allegedly booed and heckled Steve Smith as he walked through the Long Room on day four of the second Ashes Test.

The Australian batsman was on his way back to the dressing room after he was given lbw on 92 runs, having returned to the middle after being floored by a Jofra Archer fast ball earlier in the day.

The member is understood to have booed Smith, 28, and fired verbals as the batsman trudged through the Long Room, packed with members on Saturday.

It is thought to be the first time a member of Marylebone Cricket Club, founded in 1787, has been ejected for such behaviour following a rule change in May, The Times reported. 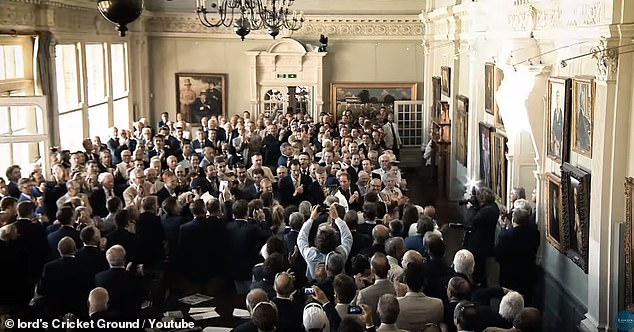 The famous Long Room which fronts the pavilion at Lord’s, the Home of Cricket, and which is packed with MCC members on match days (file photo)

The new rule book stipulates: ‘MCC expects that Members respect and support each other, the club, Lord’s and all who visit or work there.

‘Any conduct demonstrating a failure to show respect, including abusive, discriminatory or inappropriate behaviour or language, will be considered a breach of the rules of the club and render a Member liable to expulsion or suspension.’

Further to his dismissal from the pavilion, the member could face further sanction, including suspension or expulsion from the club.

The Australian Cricketers Association (ACA), the players’ union, issued a statement last night to condemn booing by a small minority of England fans at the Home of Cricket.

The jeers were heard when Smith left the field for 40 minutes to receive treatment after being caught on the neck by a ruthless bouncer from Archer.

Smith was ruled out of the fifth day of the series with concussion on Sunday.

Greg Dyer and Alistair Nicholson, the chairman and CEO of ACA, said: ‘The reality is that cricket can be a dangerous sport, especially when the bowling is as ferocious as it has been in this series.

‘To see the protocols practiced at Lords overnight was important and correct.

‘Over the English summer, generally the crowds have been terrific and really added to the contest. But when someone is hurt, yet the boos continue, it’s time to call “enough.”‘ 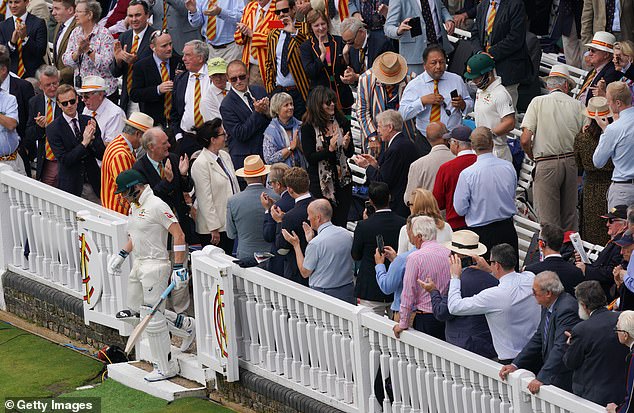 Steve Smith was able to return to the field after being given the all-clear in mandatory concussion tests, but he was declared to have suffered a concussion on Sunday and ruled out of the final day

Smith, regarded as one of the most talented batsmen of his generation, made himself vulnerable after the infamous ball tampering scandal on Australia’s tour of South Africa in 2018.

Smith was forced to resign as the captain, along with David Warner, the vice captain, and both received year long bans over ball scuffing in Johannesburg in March of last year.

Rookie Cameron Bancroft was recruited by the pair to carry out the operation, using a piece of sticky tape with granules of dirt stuck to it. Bancroft was suspended for nine months.

All three players have featured in the Ashes series against England so far this summer.