ME & MY OPERATION: New silver knee joint that stops infections and cuts the need for amputations

Material world: Silver is widely-known for its natural anti-bacterial properties

For years, I’d had problems with my left knee, caused by wear and tear to the cartilage. I’d had a knee replacement in 2006 but by 2012, it was hurting again, leaving me unable to stand for long periods.

Eventually I’d be in pain after just ten minutes, so in 2013 I had surgery to remove damaged cartilage and to realign the knee cap.

But a week later the knee swelled to twice its size. My GP said it was an infection and prescribed antibiotics.

However, four months after surgery, the knee was still swollen and too painful to put my foot to the ground, so I had two more operations — one to remove the implant because they couldn’t clear it of the infection, then another operation to put in a new implant.

Because my knee was infected, the two operations had to be done several months apart. This meant I was effectively left without a working knee joint for six months — I just had a block (known as a spacer) in its place to keep the thigh and shin bones apart — and I had to use a wheelchair.

But even after having a new implant fitted, the infection came back. It was incredibly frustrating. My knee was swollen and painful and I had to give up work. Eventually my doctors said I might need an amputation because there was a danger it could turn septic, which would be life-threatening.

I’d always been active, so being told I could lose my leg felt like the end of my world.

Then, in July 2015, a friend called to say they’d read an article in the Daily Mail about a surgeon who was treating infected knee joints like mine by washing them out with a form of vinegar, and replacing them with a new, sterile implant.

It sounded amazing so I saw him privately in May 2016.

He explained that as well as washing the wound out, he would use a new implant that was coated in silver — he said silver was known for its anti-bacterial properties. I saw it as my last chance to avoid amputation and was sick of being in constant pain, so decided to go ahead.

It would mean two more operations — one to remove the second infected implant and wash out the wound with vinegar, and then another six months later to fit the silver implant once the infection had cleared.

The first two-hour operation was in October 2016. Once the second replacement joint was removed and my knee washed out, they put a surgical cement block packed with antibiotics in its place as an interim measure to keep the bones apart. It made my leg rigid and travel very difficult. 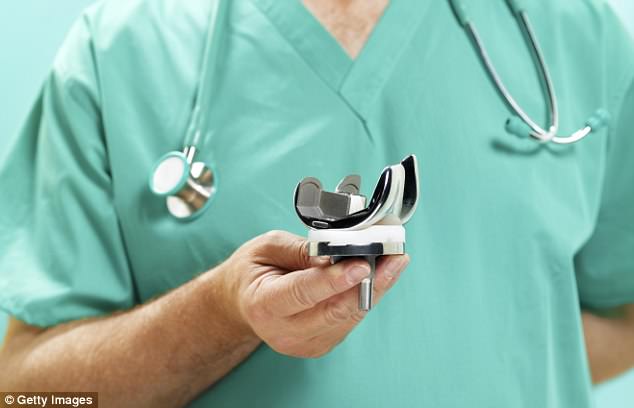 Did you know? Infection can be a problem with any joint replacement — there are 80,000 knee replacements a year in the UK, and around 1 per cent become infected

Fortunately, by March 2017, blood tests showed no sign of infection, so I was able to have the new silver implant put in.

I stayed in hospital for 12 days and needed a walking frame for two weeks, then crutches and finally a stick. But three weeks later we could fly back to Spain: I finally had a moving knee and could stand and walk on it. I also needed fewer painkillers.

Just over a year after the surgery, I can stand for hours in my shed building boats, and play with my five grandchildren. I’m finally living again.

Infection can be a problem with any joint replacement — there are 80,000 knee replacements a year in the UK, and around 1 per cent become infected.

Infection is a risk because an implant is a foreign body and bacteria present on the skin naturally can be transferred from the patient’s skin during surgery. This is why we always give antibiotics beforehand.

We try to treat any infection within a few weeks, but in some cases they become chronic. Around 2 per cent of those with an infected joint face amputation.

When joints become infected, we open it up, wash out the joint and clear away any infected tissue — in cases of chronic infection we also replace the implant because if it stays in it can become septic and life-threatening. 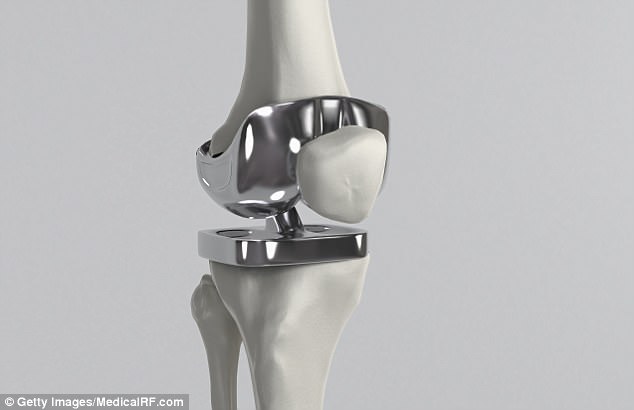 Relatively new: These silver-coated implants were pioneered in the UK around eight years ago

We usually clean out the joint using an irritant such as iodine or alcohol, but for the past five years I have been using a weak solution of acetic acid (a compound in vinegar) which I believe is more effective — a small study I led showed this was the case, with results published in the American Journal of Arthroplasty in 2015.

A few surgeons are also using new silver-coated implants. The antibacterial properties of silver have been known for millennia. Organisms such as bacteria can’t settle on it — it also emits charged particles which are anti-bacterial, and so stop infection taking hold.

These silver-coated implants were pioneered in the UK around eight years ago, for people with knee tumours, as they tend to have a higher risk of infection. For the past five years the implants have been utilised for revision knee replacement surgery, too.

In theory it could be used in all knee replacements to reduce the risk of infection, but the silver coating costs another £400 on top of the typical £800-1,200 for an implant, so the cost would not be justified. But for high-risk patients (for example smokers and diabetes sufferers are more prone to infection) including those with an existing infection, they are helpful.

For cases like Alan’s, we remove and replace the infected implant with the silver-coated one in two operations done three to six months apart, each takes around two hours. We pack the knee with antibiotics once the old implant has been removed to give the best chance of killing the infection before fitting the new implant.

First I re-open the original 10-12cm surgical scar straight down the knee to remove the implant. I clean away infected bone and soft tissue then wash the remaining parts of the joint — the end of the thigh, shin bone and surrounding area — then pour in acetic acid, leaving it to soak for 20 minutes.

Then I pack the knee with surgical cement which is loaded with antibiotics and close the wound — the cement keeps the bones apart. The leg is rigid afterwards, patients can’t bend their knee, though they can stand and walk on the leg.

Once I am sure the infection has gone, I re-open the joint and remove the cement using a hammer and chisel and sometimes ultrasound, then fit the silver-coated implant in the same way as any implant.

It goes into the thigh bone and links to the shin bone — it comes in different sizes but is larger than standard implants since so much bone has already been lost.

Around 80 per cent of revision knee surgery patients won’t need more surgery after this implant —others will need repair to the metalwork because the hinge can fail, or infection can return.

It doesn’t work quite as well as first-time total knee replacement, but is much better than having a stiff, infected knee.