Meghan Markle and Prince Harry today denied they quit royal duties and emigrated to the US because they wanted privacy as they justified their Netflix documentary charting the most intimate moments of their courtship and marriage.

The Duke and Duchess of Sussex have shared dozens of pictures, as well as footage, of themselves and their children Archie and Lilibet at home, photographs from their first dates and even footage of Harry proposing which Meghan apparently ‘live-streamed’ to a friend.

The couple handed over 15 hours of personal video they had recorded in the early months of 2020, according to director Liz Garbus, who dodged questions about how much control the Sussexes had over the shows – calling the completed series a ‘collaboration’.

Experts have claimed their decision to give up royal duties was a sign they wanted to live more privately. Harry himself said Megxit, he hoped, would lead him and his family ‘into what I hope will be a quieter life’ and the couple have launched several high-profile privacy court cases in the UK. 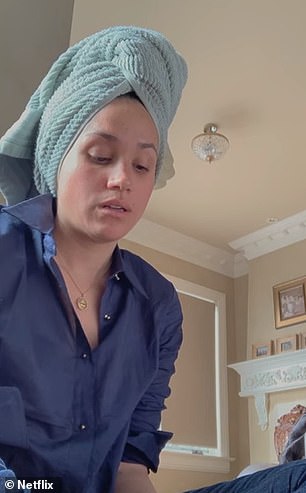 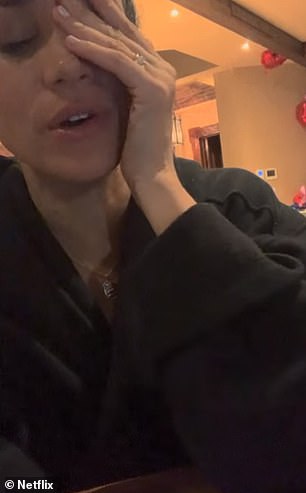 Meghan is also featured in a number of video diary segments in the first three episodes, often on the verge of tears

But their spokesman Ashley Hansen has ridiculed the suggestion that Megxit was ever about privacy, and told The New York Times: ‘Their statement announcing their decision to step back mentions nothing of privacy and reiterates their desire to continue their roles and public duties.

‘Any suggestion otherwise speaks to a key point of this series. They are choosing to share their story, on their terms, and yet the tabloid media has created an entirely untrue narrative that permeates press coverage and public opinion. The facts are right in front of them’.

The Netflix series raises questions over when they planned to make a documentary.

Harry’s introductory monologue was him staring down his mobile phone lens from Heathrow Airport’s VIP Windsor Suite as the couple ended their royal duties in March 2020 and emigrated to North America.

Ms Garbus, who took over from documentarian Garrett Bradley after she left the project, said: ‘You’re right there with Harry in the Windsor Suite processing the fact that he’s leaving the royal family for the first time in his life.

‘Then there was another clip with Meghan at home, alone, fresh out of the shower, her hair in a towel, no makeup, processing on her end what their life might actually be like.

‘It’s very personal and raw and powerful, and it made me appreciate the incredible weight that went into their decision. It also affirmed the choice I had made about wanting to unravel how this historic break came to be.’

The row over privacy will no doubt be debated again when Harry’s memoir ‘Spare’ is released in January.

During a speech given in London just hours after Megxit was announced in January 2020, Harry addressed a charity event where he said that he had taken the decision for his family so they could ‘take a step forward into what I hope will be a quieter life’.

Before Megxit, major events were dominated by privacy rows.

In May 2019, when Archie was born, they delayed the announcement so they had the chance to ‘celebrate privately as a new family’.

The Queen’s former spokesman Dickie Arbiter said at the time: ‘The birth of Archie was a complete disaster. The secrecy made a mockery of the whole thing’.

Deal or no deal: When was Netflix agreement made with Sussexes?

January 3, 2020 – Meghan and Harry announce on Instagram they are stepping back as senior members of the Royal Family.

January 8, 2020 – Agreement is reached that the couple would no longer be working members of Britain’s royal family and could not use ‘Highnesses’ titles.

March, 2020 – Harry records a monologue in Heathrow Airport’s Windsor Suite which will become the opening of the Netflix series.

September 2, 2020 –  It is publicly announced Netflix and the couple have signed a deal, reportedly worth £88million.

December 8, 2022 – The first three episodes of the series are released at 8am on Netflix.

Meghan told Oprah in 2021: ‘I think everyone has a basic right to privacy. Basic. We’re not talking about anything that anybody else wouldn’t expect’.

But she denied Megxit was about privacy itself, pointing to their statement that talked about financial independence from the royals so they could ’embark on the next chapter in our lives’.

It emerged that the couple had started filming themselves and giving interviews as far back as March 2020, and continued until August this year, just weeks before the Queen’s death.

A source said: ‘This was all being filmed while both the Duke of Edinburgh and the Queen – Harry’s grandparents – were suffering from serious ill-health and in the last few months of their lives.

‘They even came over to mark Her Majesty’s Jubilee while colluding with the filmmakers, without telling her what they were doing.

‘That’s shameful and cowardly. There are a lot of people who are glad the late Queen is not here to see it.’

The pair, whose limited series was released on the streaming giant at 8am on Thursday, self-shot a number of intimate ‘video diaries’ for the show.

But the timing suggest the plan for some kind of tell-all documentary dramatically predates their public announcement with Netflix in September 2020.

In fact the Duke’s introductory monologue, staring down his phone lens from Heathrow, is shot at the end of their last duties before Megxit in March 2020.

It is one of the few dated self-shot clips but it suggests the couple were already thinking about telling their story.

They were seen as working Royals for the last time at the Commonwealth Day service at Westminster Abbey days earlier on March 9.

Half a year later a rumoured £88million deal with the streamer to talk about their lives was made public.

Royal commentator Richard Fitzwilliams told MailOnline: ‘There have been rumours and reports that they were planning to exploit their royal status early on.

‘To my knowledge nothing is confirmed as fact though it is thought that they wanted an interview with Oprah when senior working royals.’

Norman Baker, former MP and now Royal commentator, told MailOnline: ‘It may well signify a long-term plan to do something – or just accumulation of stock footage.

‘They clearly wanted to use it at some point. Their knowledge on the Royal Family essentially ended when they left the country and that institution.

‘They are essentially mining the past now, not the future.

‘They got £88million from Netflix so it’s very clear that now [they] want their pound of flesh.’

The clip from the airport is returned to a number of times during the first episode.

Harry explains in it: ‘Hi, so we’re here on, err, Tuesday, Wednesday, the something of March, we’ve just finished our two weeks.

‘Our final push, our list stint of Royal engagements.’

Meghan is then seen in Vancouver, Canada, on a similar video to camera. 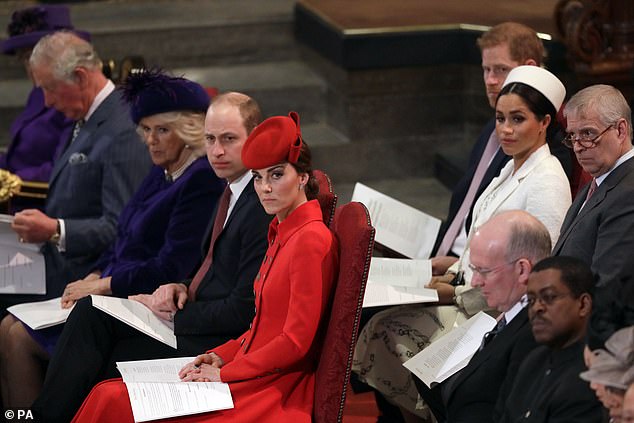 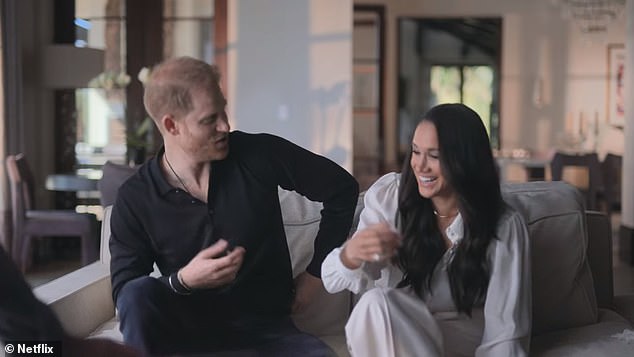 The ‘unprecedented and in-depth’ docuseries, directed by Oscar-nominated Liz Garbus, is billed as a Netflix global event, with Harry and Meghan sharing ‘the other side of their high-profile love story’

She says: ‘H is in Britain and I am here, I don’t even know where to begin.’

The show then returns to the Heathrow video and Harry saying: ‘My job is to keep my family safe.

‘By the nature of being born into this position and everything that comes with it.

‘The level of hate that has been stirred up in the last three years especially against my wife and my son. I am genuinely concerned for the safely of my family.’

Meghan is seen again in her self-shot footage sighing and saying ‘I just really want to get to the other side of this.

‘She then appears to be about to cry before adding: ‘I don’t know what to say anymore’.

Harry’s monologue is then revisited, with him saying: ‘This isn’t just about our story, this has always been so much bigger than us.

‘And I think anyone else in my situation would have done the same thing.’

Later the Duke of Sussex says a friend told them they should document this particular period of their lives.

He said: ‘A friend of ours actually suggested that we document ourselves through this period of time.

‘With all of the misinformation that was going on out there, especially about us and the departure, it seemed like a really sensible idea.’

It is not clear when this was made, but she is showing her wedding ring and the context suggests it was inside Frogmore Cottage.

A clip then shows Harry, who is wearing a neckerchief, staring at the camera, trying to remember what day it is. It is not clear what year it is taken.

The next clip shows Meghan showing Archie snow outside of a home.

Then in interview footage, Meghan says: ‘We’ve been really conscious of protecting our kids as best as we can and also understanding the role that they play in this really historical family.’

Later Meghan, in another filmed interview, adds: ‘The past six years of my life, books are written about our story from people who I don’t know. 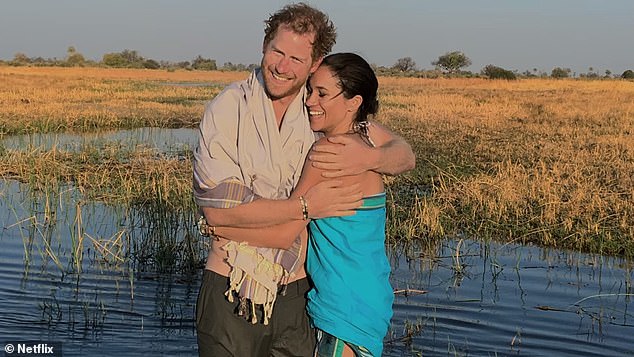 Meghan and Harry early in their relationship. The Duke of Sussex has said his wife being an American actress ‘clouded’ his family’s view of her.

‘Doesn’t it make more sense to hear our story from us?

As early as April 2020 it was disclosed Nick Collins of The Gersh Agency had been advising the couple as what to do post-departure.

It was reported at the time he was going to handle any talks with Silicon Valley investors, Hollywood studios, as well as TV giants such as Amazon, Netflix and Hulu.

Then on September 2 that year Meghan and Harry announced they had joined Netflix.

Their statement declared: ‘Our lives, both independent of each other and as a couple, have allowed us to understand the power of the human spirit, of courage, resilience and the need for connection.

‘Through our work with diverse communities and their environments, to shining a light on people and causes around the world, our focus will be on creating content that informs but also gives hope.

‘As new parents, making inspirational family programming is also important to us, as is powerful storytelling through a truthful and relatable lens.’

Ted Sarandos, a co-chief executive and the chief content officer at Netflix, hailed their new partnership.

He said: ‘Harry and Meghan have inspired millions of people all around the world with their authenticity, optimism and leadership.

‘We’re incredibly proud they have chosen Netflix as their creative home – and are excited about telling stories with them that can help build resilience and increase understanding for audiences everywhere.’