Megyn Kelly wears a tight red dress to the US Open

Megyn Kelly and her husband Douglas Brunt attended the opening night of the US Open among a crowd of celebrities.

The 47-year-old NBC host and her spouse of nine years stepped out for an evening at Queens’ Flushing Meadows on Monday, holding hands as they arrived to the opening night event.

For her night on the town, Kelly picked a skintight, off-the-shoulder red dress, paired with tan pumps and gold earrings.

Lady in red: Megyn Kelly looked ready for a night on the town as she arrived at the opening day of the US Open in Queens on Monday evening 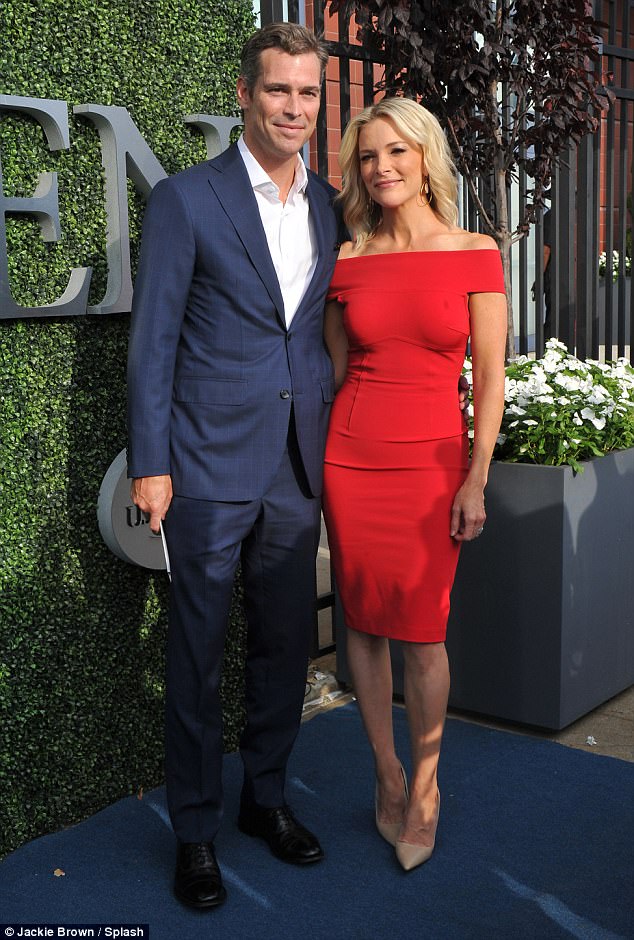 Lucky in love: The 47-year-old NBC host attended the event with her husband Douglas Brunt 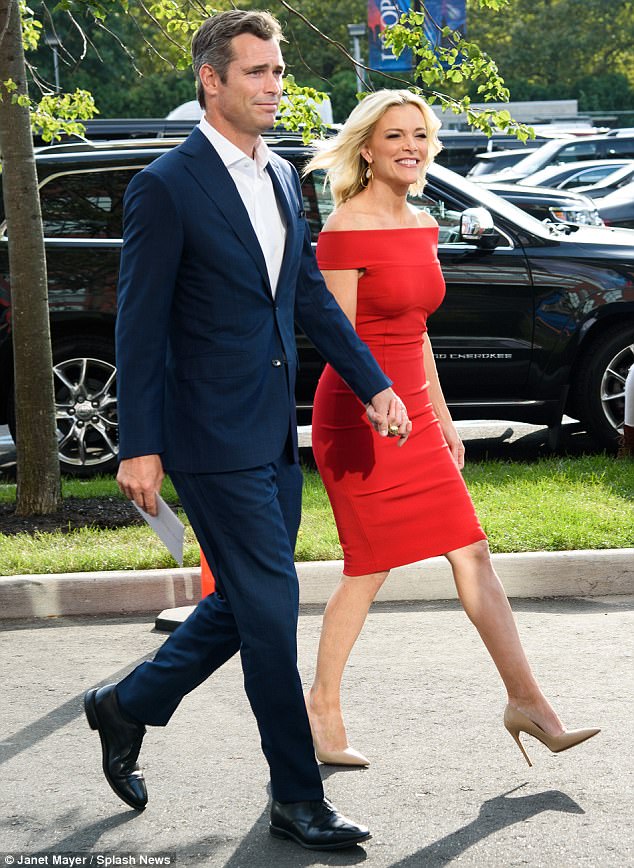 Ready to roll: Megyn happily flashed a wide smile at the cameras, while her husband looked somewhat bemused by the attention

Hot stuff: She completed her fiery look with a pair of nude pointed-toe heels, and wore several rings on her fingers

Brunt, meanwhile, opted for a suit, which he wore sans tie on top of a white shirt for a semi-formal look.

Looking every inch the happy couple, Kelly and Brunt arrived at the event hand-in-hand, with the former Fox News anchor happily beaming at the cameras.

Brunt, meanwhile, appeared to be finishing a phone conversation as the couple made their way inside the arena, however he soon pocketed his smartphone and gamely posed for a few photos with his wife, while keeping their tickets carefully clutched in his hand.

Kelly and Brunt were surrounded by several other high profile specatators, including Martha Stewart, Vogue editor-in-chief and tennis fanatic Anna Wintour, and designer Vera Wang, who has attended the tennis tournament with the editrix in the past. 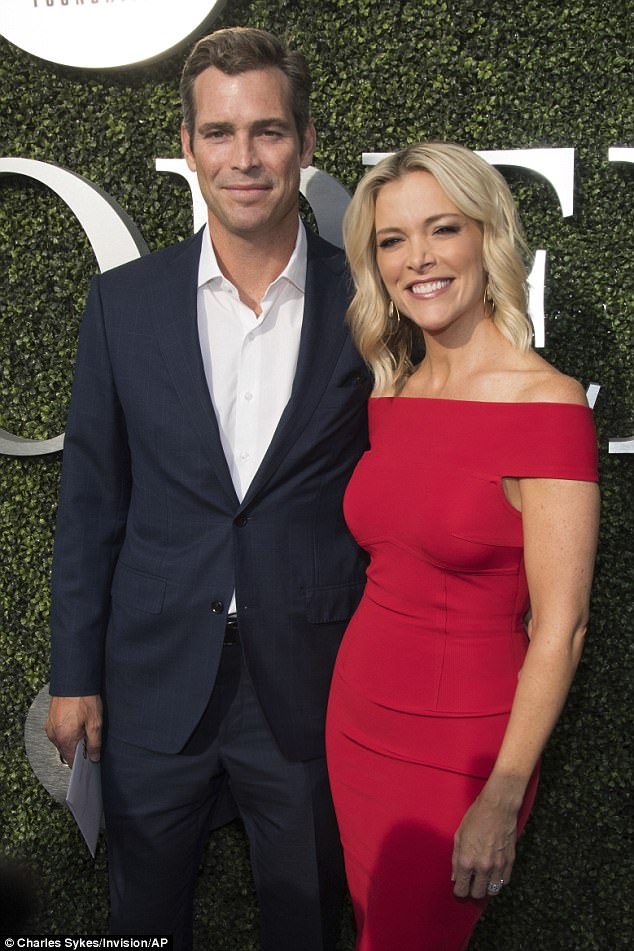 Happy as can be: Douglas happily held onto the couple’s tickets as they gamely posed for the waiting photographers 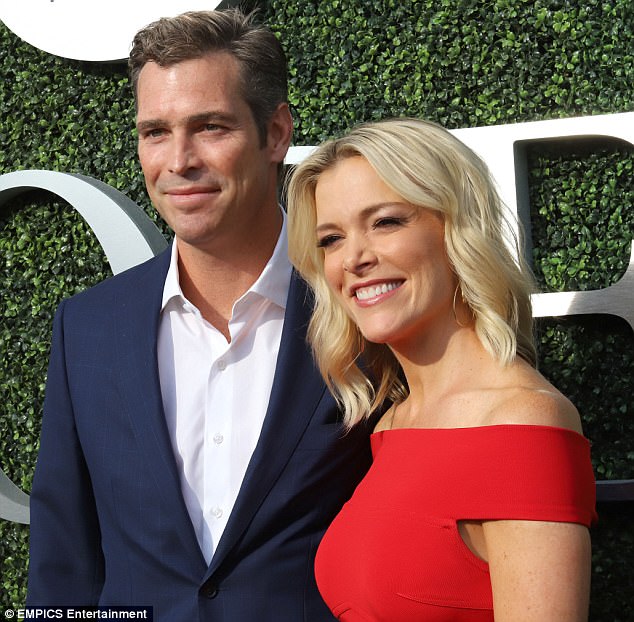 Summer loving: The pair were lucky enough to attend the US Open on a lovely, sunny evening 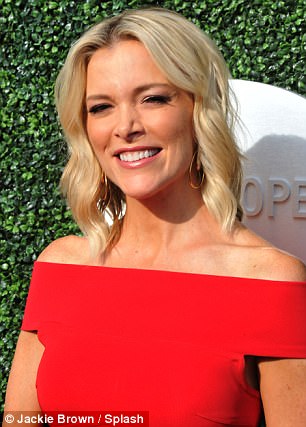 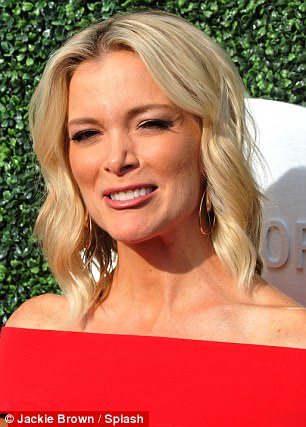 Something to smile about? It was recently revealed that Megyn earns more than Jimmy Fallon, Stephen Colbert and Jimmy Kimmel 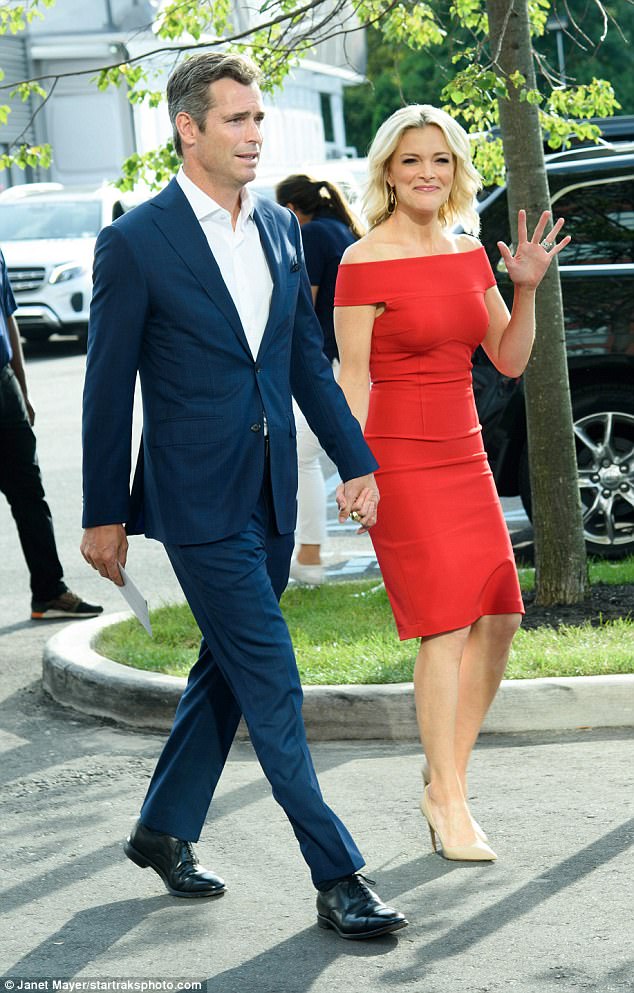 Say cheese: The couple put on show of affection, arriving at the sporting event hand-in-hand

During the match, Kelly could be seen leaning towards her husband while shielding her mouth with her hand to tell him something.

Both of them were holding beverages for a bit of hydration and refreshment throughout the evening, which were also perhaps being used as a form of celebration.

Last week, it was revealed that Kelly is actually the sixth highest earning TV host in the US, according to Variety, outearning Jimmy Fallon, Stephen Colbert and Jimmy Kimmel.

Kelly tied for the sixth spot on the list with Good Morning America host Robin Roberts, with both ladies earning an estimated $18 million each for their work on competing networks, which is more than every single other late night host on the list 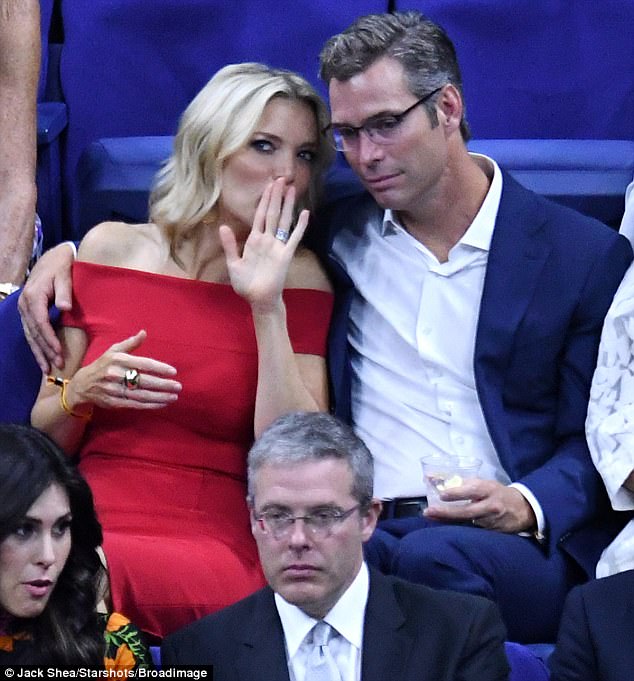 Share the secret! Once seated, Douglas put on a pair of glasses, no doubt to better see the action on the court below him 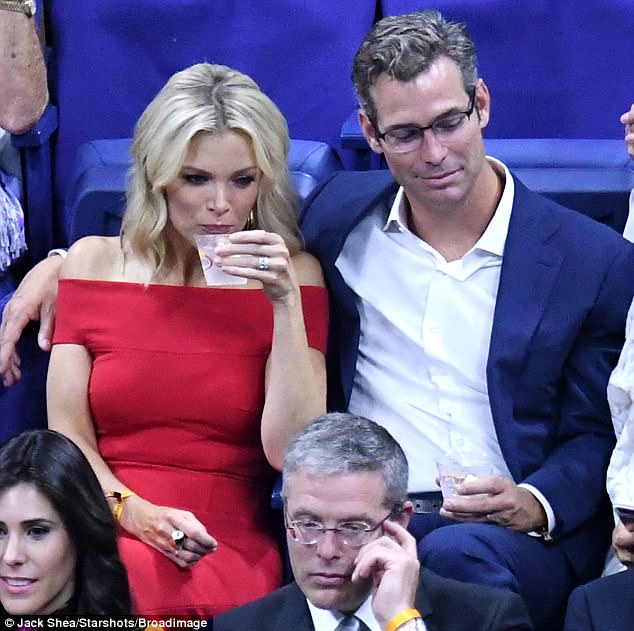 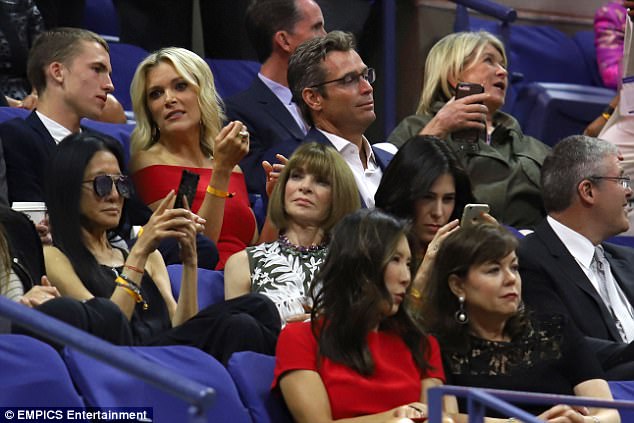 In good company: The couple was seated alongside the likes of Martha Stewart (right), Anna Wintour (center), and Vera Wang (left)

Kelly’s salary was of particular interest given the amount of press that surrounded her move from Fox News to NBC, with her former employer offering her a reported four-year contract that would pay her a total of $100 million to stay on as host of ‘The Kelly File.’

Reports had her new salary as low as $12 million and most seemed to believe her contract was for $15 million, but it seems those numbers were all too low.

Kelly has been spending the past few weeks gearing up for her big morning show premiere next month on September 25 at 9am in front of a live studio audience.

This is the first time Kelly has attended the US Open since her move to NBC News earlier this year after her 13-year career at Fox News.