Incredible footage of the record-breaking Melbourne earthquake has been captured by a fitness fanatic filming his morning workout.

Harry Mitchell was in the middle of a plank on his yoga mat when a magnitude 5.8 quake rocked Victoria at 9.15am on Wednesday, the biggest the state has experienced since European settlement in 1834.

In a video shared to TikTok, Mr Mitchell can be seen initially mistaking the event for muscle shakes which often occur during strenuous training sessions, before calling out to his housemate: ‘Dude, is that an earthquake? Holy s**t.’

The 30-second clip – captioned ‘And I thought, man this plank has me shaking!’ – shows plants and furniture swaying, while a thunderous noise that sounds like a jet engine rumbles in the background. 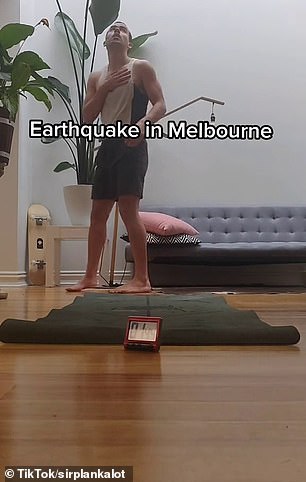 Harry Mitchell (pictured) was in the middle of a plank on his yoga mat when a magnitude 5.8 quake rocked Victoria at 9.15am on Wednesday, the biggest the state has experienced since European settlement in 1834

It’s not clear which part of Melbourne the video was filmed in. Daily Mail Australia has contacted Mr Mitchell for comment.

The terrifying scene, which has racked up more than 70,000 views since it was uploaded online around 10am, sparked stunned responses, with many describing it as ‘wild’ and ‘unbelievable’.

‘Wow, thanks for sharing! I’ve never seen an earthquake so close to home,’ one person wrote.

‘Omg!’ added a second, while a third said the quake woke everyone in the house except for their father.

A fourth said they felt the tremors in Canberra, 662km north, while a fifth said they thought the sensation was their washing machine exploding.

The epicentre of the quake, which hit at 9.15am near the small town of Mansfield, 180km north-east of Melbourne, demolished part of a building on famous Chapel Street. It was 10km deep, according to Geoscience Australia.

The quake was followed by two 4.0 and 3.1 magnitude aftershocks 18 and 39 minutes later – both within 10km of the original tremors.

The earthquake is the biggest Victoria has experienced since 1834 and there will be more aftershocks, a seismologist told ABC Radio Melbourne. 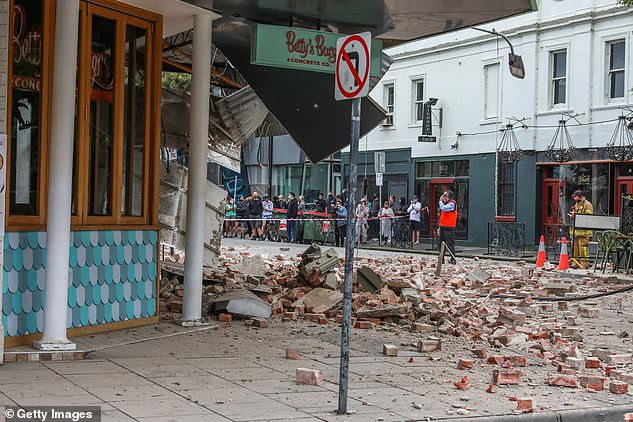 Pictures have emerged of a Betty’s Burgers restaurant partially collapsed on Chapel St in Melbourne’s inner-city after a magnitude 5.8 earthquake

Tremors were felt as far away as Tasmania, South Australia and some parts of Sydney.

The burger chain later said in a statement that there was no-one inside the building at the time and all staff were safe. 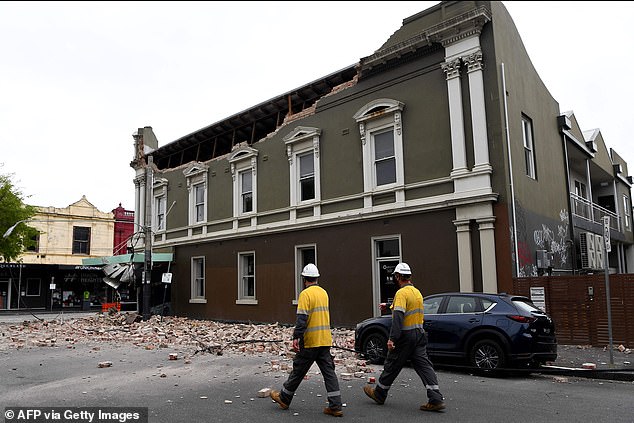 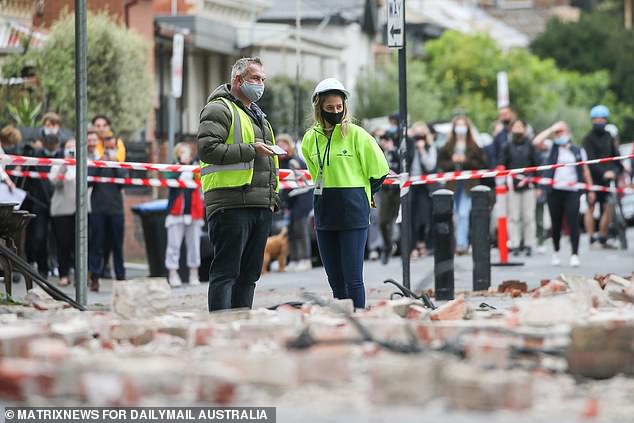 Office and apartment blocks across Melbourne were evacuated, with homeowners close to the epicentre in Mansfield reporting damage to their properties.

There are also reports of damage in Prahran – where rubble was seen strewn across the road on Wattle Street – Brunswick, West Melbourne and Albert Park.

Seismologists have meanwhile warned there could be more aftershocks throughout the day with a larger event also possible.

‘Geoscience have confirmed there is a possibility that we may receive further aftershocks and potential risk of further earthquakes,’ Victorian Deputy Premier James Merlino said in a press conference.

‘Indeed, more aftershocks could occur for weeks, if not months.’

A homeowner near Leongatha in South Gippsland who was in the bathroom when the earthquake hit said the sound was like a ‘jet engine’ and the glass shower screen was shaking.

‘I grabbed my granddaughter and held her tight,’ the woman said. ‘It was very frightening.’ 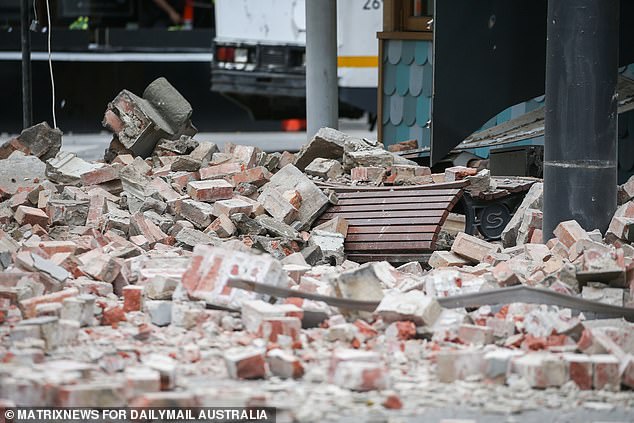 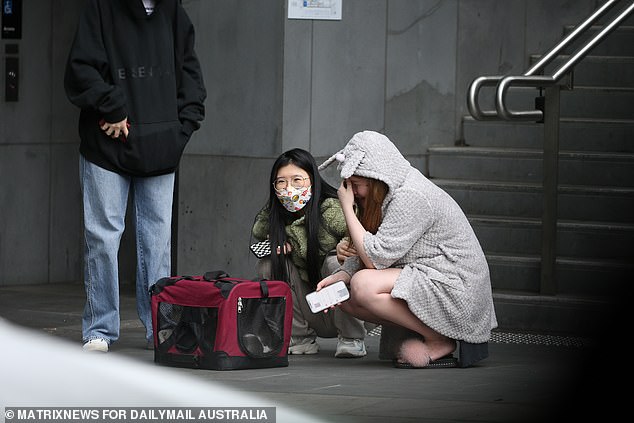 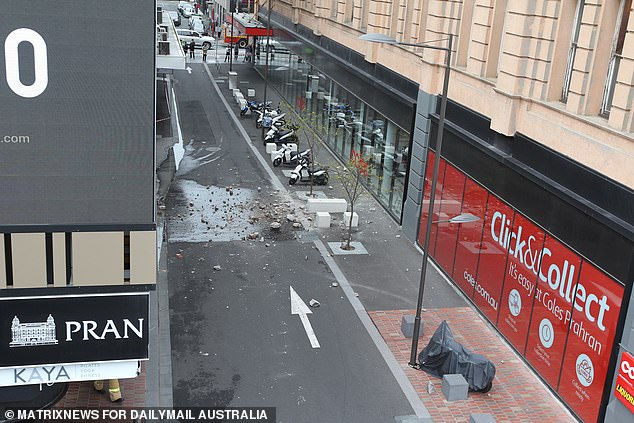 New Zealander Colin, who lives in Ferntree Gully in Melbourne, said the quake felt just as powerful as the magnitude 6.2 Christchurch earthquake in 2011 that caused widespread damage across the city and killed 185 people.

‘About 30 seconds it lasted. I didn’t know whether to run outside or upstairs,’ he told Newstalk ZB.

‘I’m in a solid concrete house, so it really shook. It shook as much as I’ve felt in Christchurch.’

Victoria’s State Emergency Service confirmed the earthquake was ‘6.0 on the Richter scale and emanated from Mansfield. There is no tsunami threat’. 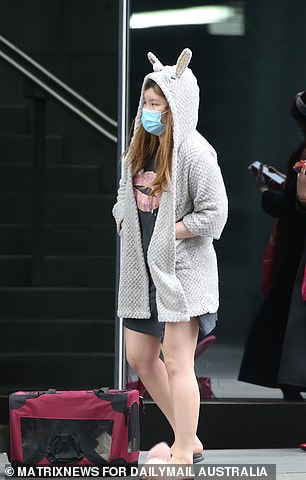 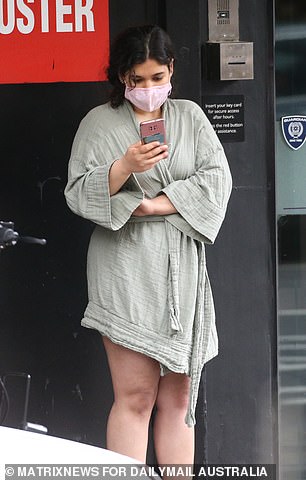 Pictured are people evacuating Melbourne CBD buildings after Melbourne felt the tremors from a magnitude 5.8 earthquake on Wednesday morning 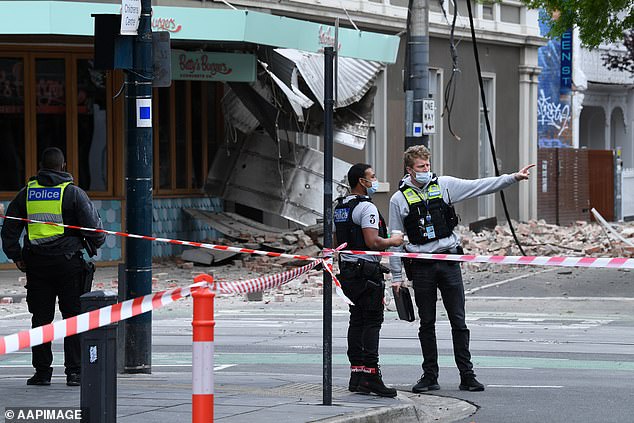 Pictured: Damage to the Betty’s Burgers restaurant. The earthquake has been reported in Victoria and tremors were felt across Melbourne and as far away as Canberra and Sydney

Premier Daniel Andrews made the first official reaction to the earthquake, tweeting at 9.47am: ‘Yes, that was an earthquake.’

Prime Minister Scott Morrison then fronted a press conference in Washington DC – where he is taking part in the Quad leaders summit – to reveal the ‘rare event’ had so far led to no injuries.

‘These are very rare events in Australia and I am sure people would have been disturbed – particularly in the most immediate area effected,’ he said.

‘The agencies at a state government level are there responding, and the federal Government will provide the support that is necessary.’ 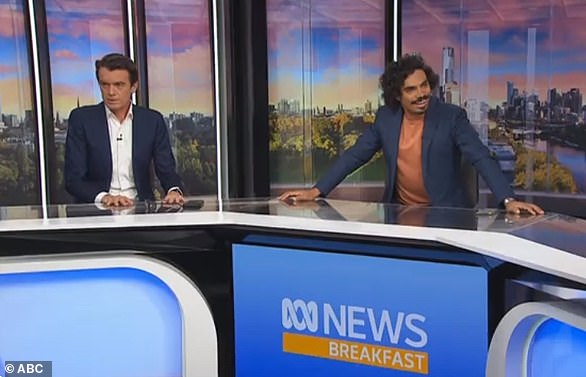 ‘Let’s go!’ What a bad ass reaction from Michael!’ one user said.

Mr Morrison said he was in ‘text contact’ with Mr Andrews about the quake.

Emergency crews have warned Victorians to brace for further aftershocks throughout the day.

‘If you are located in Victoria, you are in danger,’ Victoria’s SES said in a statement.

The SES is receiving calls for assistance from across the state but is yet to make an assessment of any damage.

Lynne Myers of High County Apparel in Mansfield told AAP ‘it just scared the hell out of us.’ 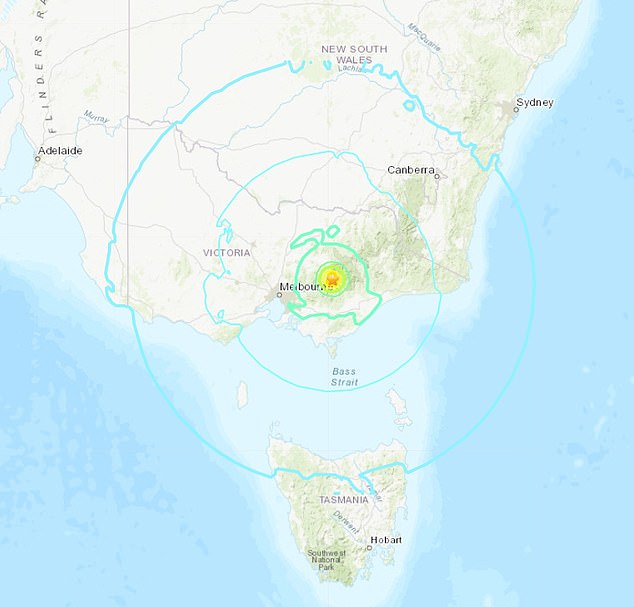 ‘Everything shook, the roof shook, boots fell off the shelf and I just ran outside,’ she said.

‘There’s no cracks or anything in the walls. We seem to have got over it pretty well. Everyone’s a bit shaken up here but there doesn’t seem to be any damage.

‘I’ve lived here 29 years and have never felt anything like it.’

Mansfield Shire Councillor Mark Holcombe said he lived in the area for 20 years but had never experienced an earthquake.

He said it ‘came out of left field’.

A woman named Elizabeth from eastern Melbourne was on a work call when the quake hit.

‘All the windows were shaking, I yelled at the kids to come and stand in a doorway but our eight-year-old ran outside to see if any sinkholes were opening up,’ she said.

The magnitude 5.6 quake that struck in the suburbs of Newcastle, NSW is widely regarded as one of Australia’s worst natural disasters.

Thirteen people died and more than 160 were injured – with the damage cost estimated at $4billion.

A 6.2 magnitude earthquake struck Christchurch, on New Zealand’s south island, on February 22, 2011 – claiming the lives of 185 people and leaving an estimated 2,000 with injuries.

The quake struck 6.7km southeast of the city at a depth of 6km.

Ciara Lynch, a 26-year-old Irishwoman living in Balaclava, nine kilometres south of the CBD, was in a Zoom meeting with colleagues in Melbourne and Sydney when her living room started to shake.

‘People were screaming on the call, it was the wildest thing I’ve ever experienced,’ she said.

Baristas at Industry Beans cafe in Melbourne’s inner-north said the walls ‘rumbled’ and lights swung from side to side while they took their morning break.

‘It’s the Dan Andreas Fault’: Hilarious reactions to the ‘biggest earthquake since European settlement’ as it rocks Melbourne and Australia’s south-east

Australians have flocked to social media with hilarious reactions after a 5.8 magnitude earthquake rocked Melbourne and the nation’s southeast.

The quake was 10km deep and centred at Mansfield, a small town on the foothills of Victoria’s alps, at around 9.15am, with tremors felt as far away as NSW and Tasmania.

It is the biggest earthquake Victoria has experienced since European settlement (1834) more aftershocks are expected.

Despite the terrifying nature of the event, light-hearted Aussies were quick to poke fun at the situation which coincidentally coincided with the third day of planned anti-vax protests in Melbourne as construction workers rally against jab mandates.

A meme quickly began circulating on social media showing Dan Andrews in China, making a call to ‘unleash the earthquake’ in Victoria to punish residents. 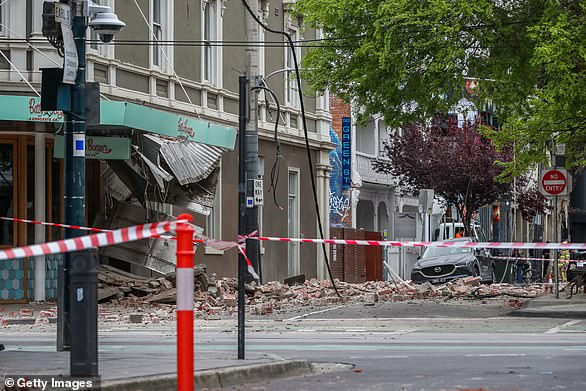 A massive 5.8 magnitude earthquake rocked Melbourne on Tuesday, with tremors felt as far away as the NSW Central Coast. Pictured: Damaged buildings are seen along Chapel Street

‘When the police said they were deploying ‘different tactics’ in response to the Melbourne protests, firing up an earthquake machine was not something I had on the pick list,’ one person tweeted.

‘No no need to worry Melbourne. That was just Dan Andrews turning Victoria off and then back on again,’ another man wrote.

Several others joked the earthquake was caused by the ‘Dan Andreas Fault’ – a name play on the 1200km long San Andreas Fault that runs through California.

Meanwhile, some suggested the premier would be cracking down on Covid restrictions in light of the destruction caused by the natural phenomenon. 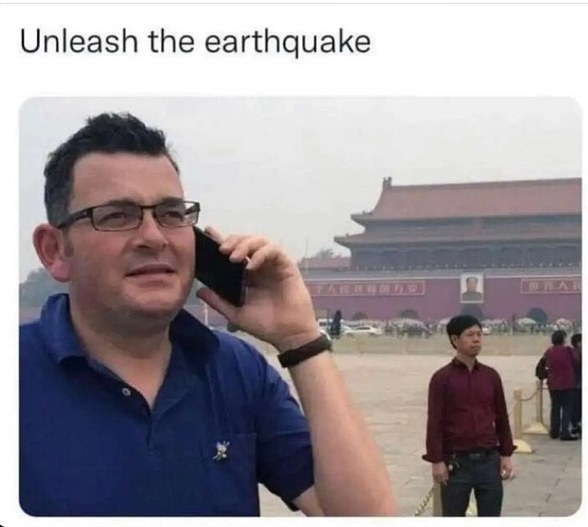 ‘Dan Andrews to lock down Victoria until we eliminate earthquakes,’ one person tweeted.

‘The earthquake has been fined for going outside of a 5km radius,’ another added.

‘Starting to feel like @Dan Andrews roadmap is actually the worst game of Jumanji ever,’ a third said.

A locked-down NSW resident claimed the earthquake would not have been allowed to spark widespread damage in his state.

‘Sydney earthquakes are only allowed within 5km of your home, with only two aftershocks permitted,’ he wrote.

‘No earthquakes may continue past 10pm on a weeknight, unless situated at the casino.’

Someone else quipped the earthquake should be subjected to Covid vaccine requirements.

‘The earthquake can’t just move around the state freely like that without at least 1 dose of the vaccination #IShakeWithDan,’ they wrote.