Melbourne goes back into lockdown

The whole of Melbourne and the Mitchell Shire north of the city will be placed back into lock down for six weeks from 11.59pm on Wednesday after Victoria recorded 191 new cases of coronavirus – its worst figure yet.

Residents will be only allowed to leave their homes for work and study, giving or receiving care, shopping for essentials and daily exercise near where they live.

Premier Daniel Andrews said the move was essential to avoid ‘thousands and thousands’ of cases.

Chief Health Officer Professor Brett Sutton confirmed 37 new cases are linked to outbreaks and 154 are under investigation, bringing the state’s total to 2,824 cases. 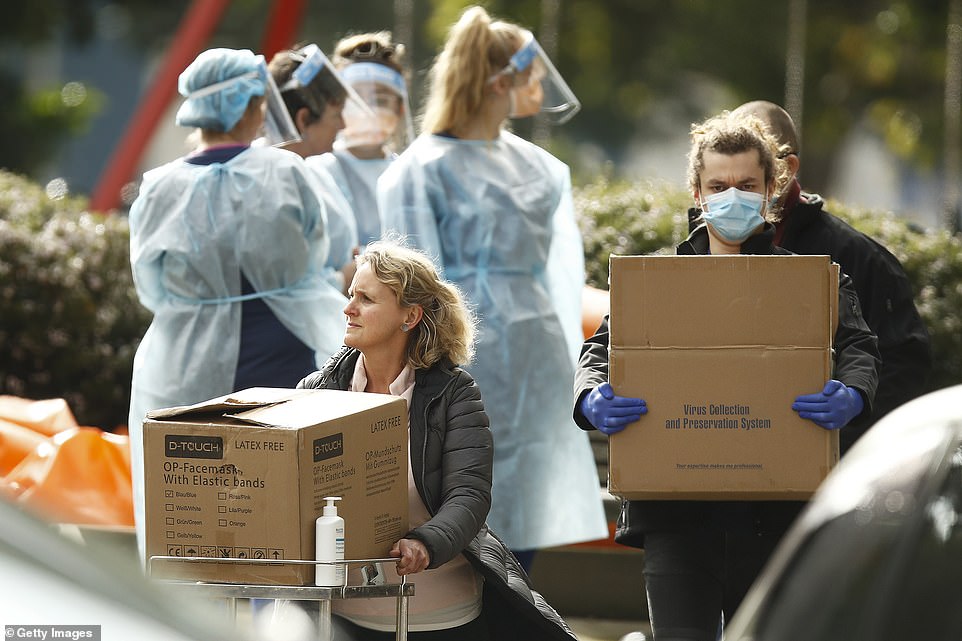 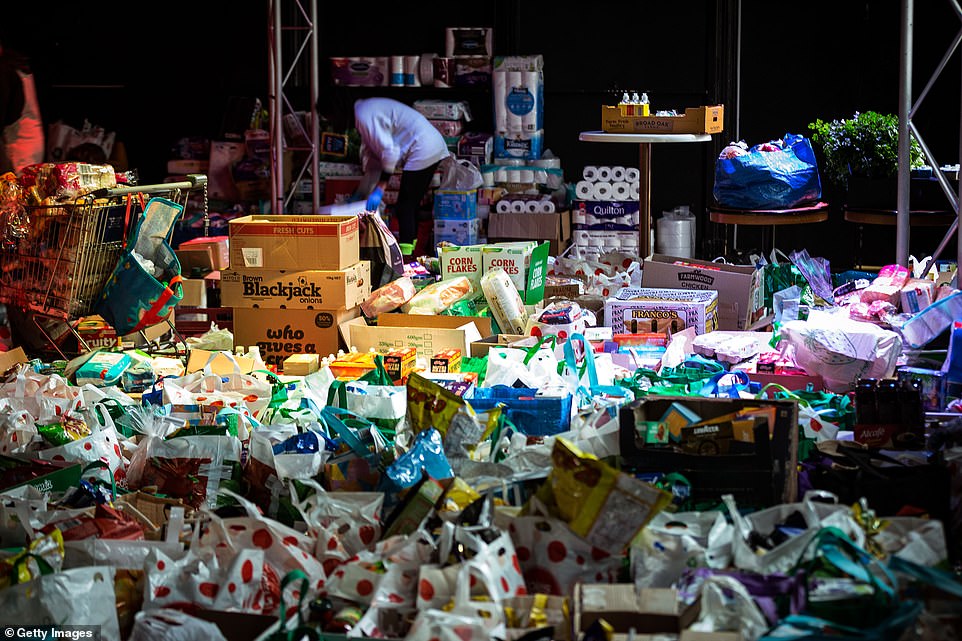 Volunteers have been delivering food to public housing residents. Pictured: A stack of food and supplies stored before distribution 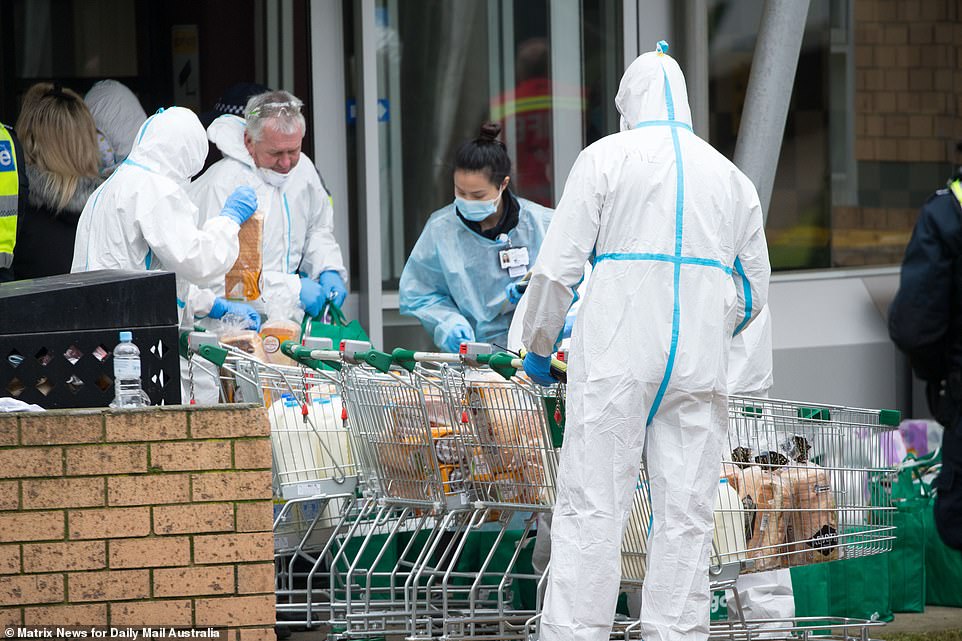 One carpet-cleaner described the conditions in the towers as ‘worse than prison’ because residents are not allowed outside. Pictured: Workers help deliver food to residents

Thirteen new cases are linked to nine Melbourne tower blocks which have suffered 69 cases and been placed under hard lockdown since Saturday, meaning residents cannot leave for any reason without special approval.

Pictures from the housing commission blocks today show firefighters dressed in hazmat suits preparing to enter the buildings to deliver milk and bread while dozens of police stand guard outside.

It comes as 650 police and 350 soldiers set up road blocks and drones along the 1,000km-long New South Wales-Victoria border before it is shut down at midnight tonight for the first time since Spanish Flu struck in 1919.

NSW Police Minister David Elliott said Victoria should help pay for border closure because it was ’caused by a situation in Melbourne’ as he called the shutdown a ‘sad situation for Australia’. 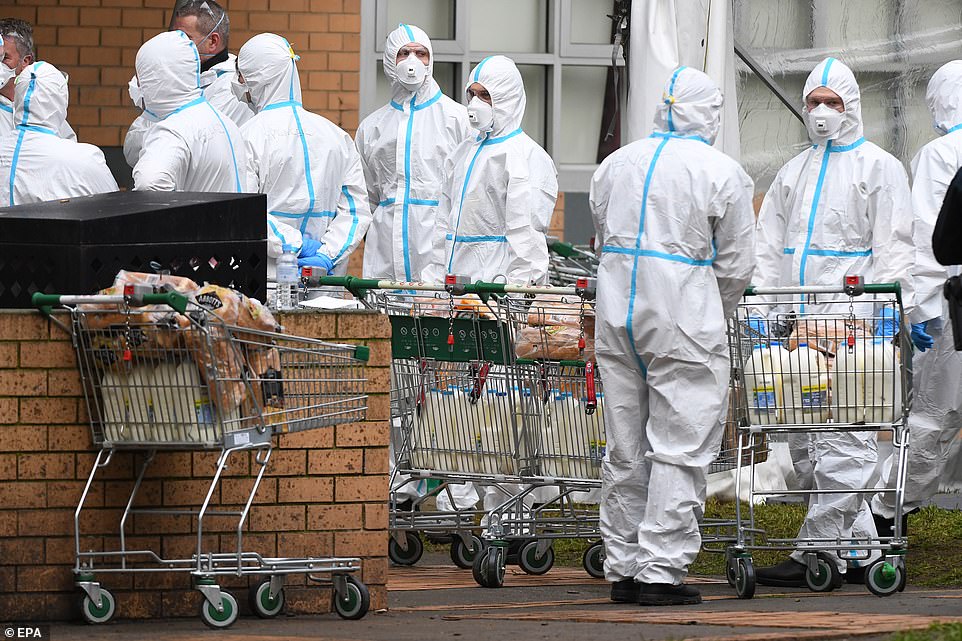 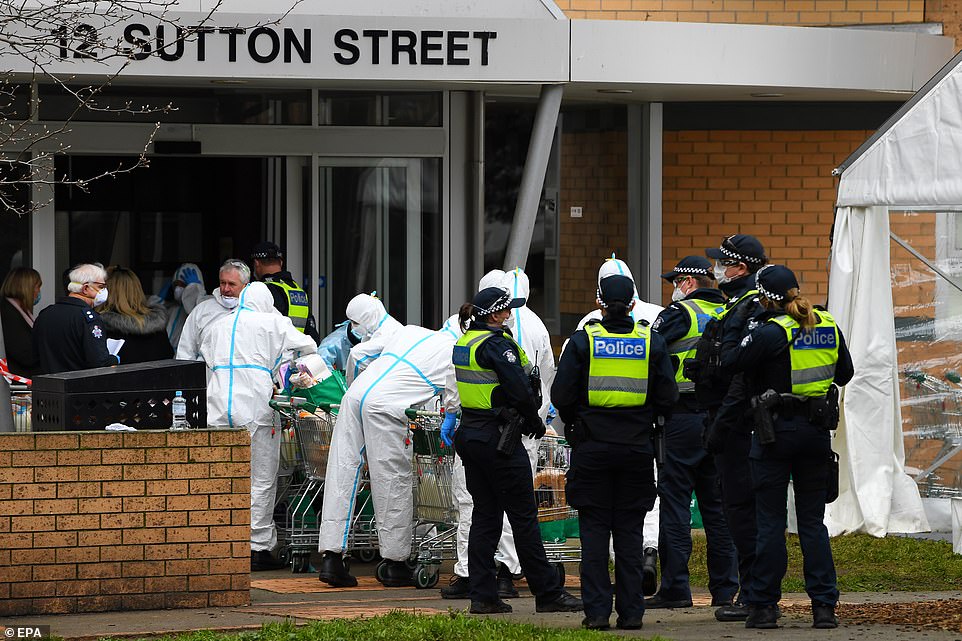 Police presence: Nine public housing towers blocks including 3,000 residents have been put under hard lockdown, meaning they cannot leave for any reason. Pictured: Police at a housing block in North Melbourne 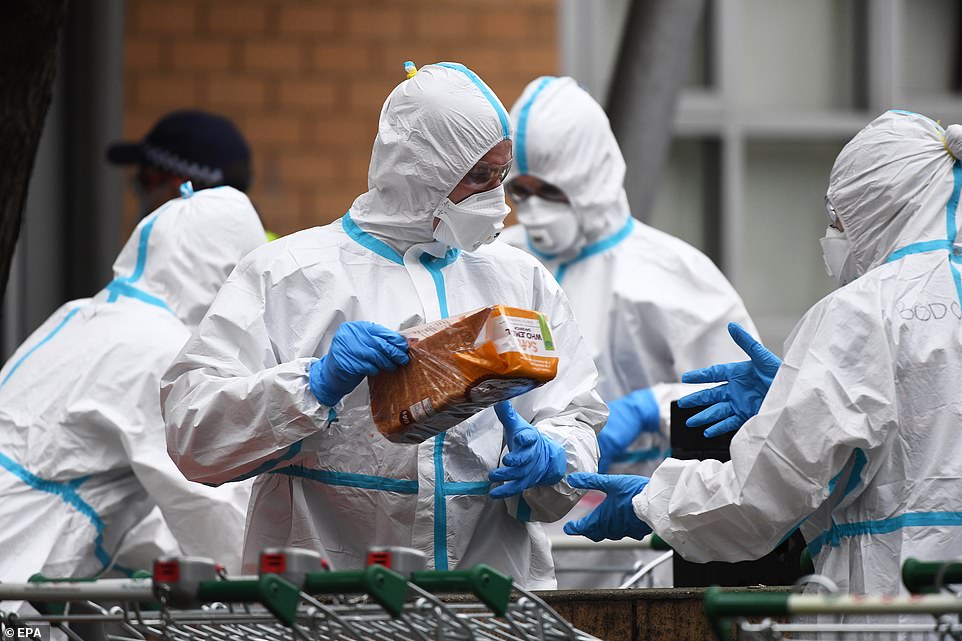 Delivery: The Melbourne Public Tenants Association, on behalf of the 3000 residents in the Flemington and North Melbourne estates, say residents have been left in the dark over enforced hard lockdown. Pictured: Firemen deliver bread 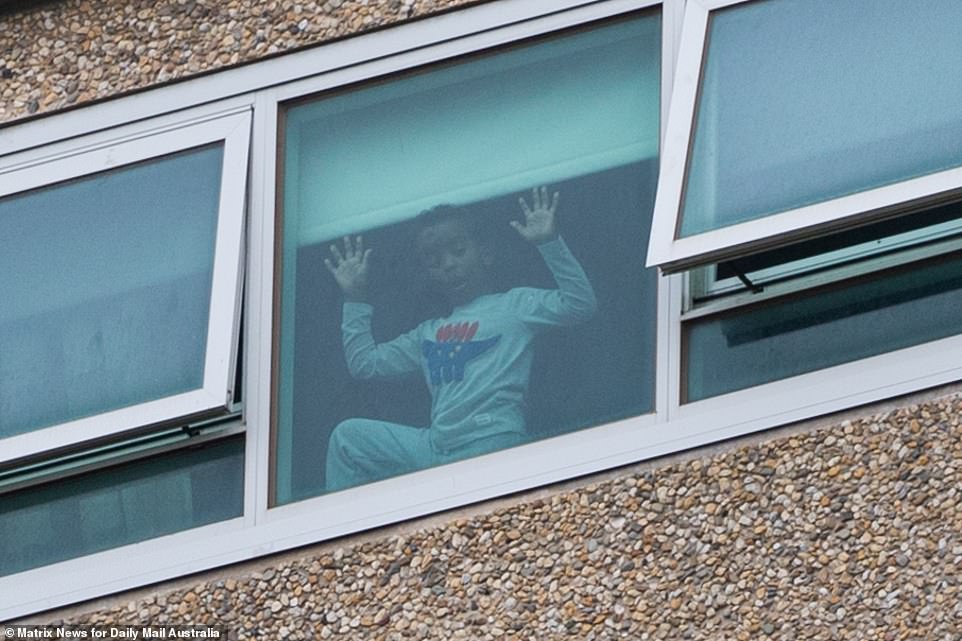 Locked down: A resident of a housing commission block in north Melbourne presses against the window as police patrol outside

Victoria’s new case total is the second-highest of any state after New South Wales recorded 212 new cases on 28 March during the peak of the pandemic in Australia.

But many of those were returned travellers and their close contacts, meaning the Victoria outbreak is far more dangerous and a ‘threat to the nation’ because the cases are transmitting rapidly among the local community.

‘I don’t think that anybody can rule out that if the disease continues to spread, there could be further restrictions,’ he told the Nine’s Today show.

‘I think it’s very important to be open and honest about that. At this stage, again, it appears primarily urban Victoria.

‘But we actually have to respond to the facts as they occur and we’ve always identified this notion of rings of containment, of isolating the hotspots and then working out from there.’ 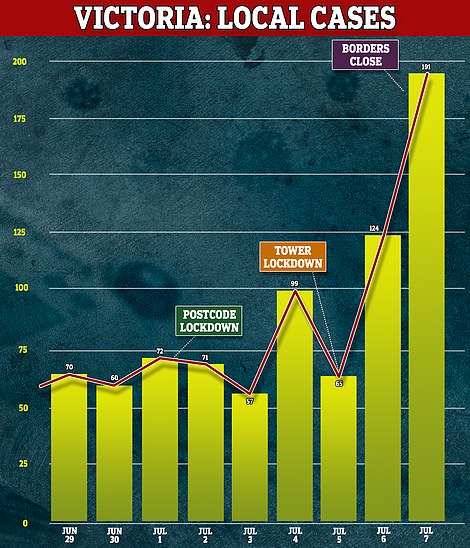 This graph shows how community transmission has soared

His comments came as:

Four of Victoria’s new cases related to an outbreak among emergency department staff at Northern Hospital Epping, which now totals eight staff and one household contact.

The emergency department remains open with a temporary reduction in non-urgent elective surgery and outpatient appointments.

A new case has also been confirmed in a staff member at the Assisi aged care facility in Rosanna, in Melbourne’s northeast.

The staff member did not work while infectious and widespread testing of staff and residents at the facility will begin on Tuesday.

Staff undertaking contact tracing in north Melbourne are finding that some patients are reluctant to share their close contacts, according to the Herald-Sun.

The newspaper reports that in some cases residents have been told by officials they are a close contact as long as five days after they met a confirmed patient.

Meanwhile, residents of the nine locked-down towers said they feel let down by a lack of communication, food and supplies. Some have complained they have had to go hungry because officials have not brought them enough to eat.

The Melbourne Public Tenants Association, on behalf of the residents in the Flemington and North Melbourne estates, say residents have been left in the dark since the state government’s hard lockdown was enforced on Saturday. 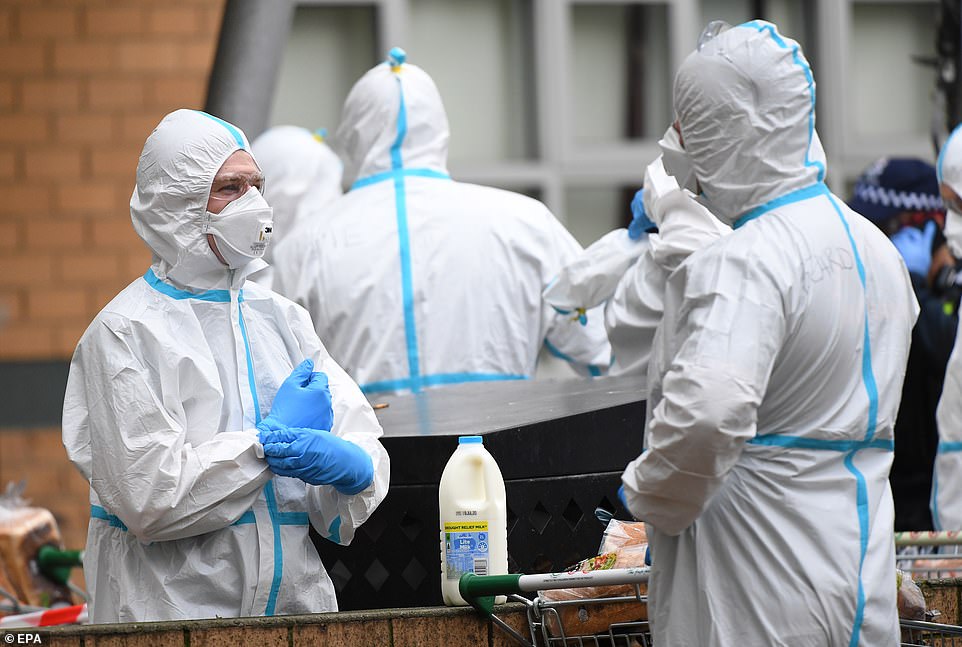 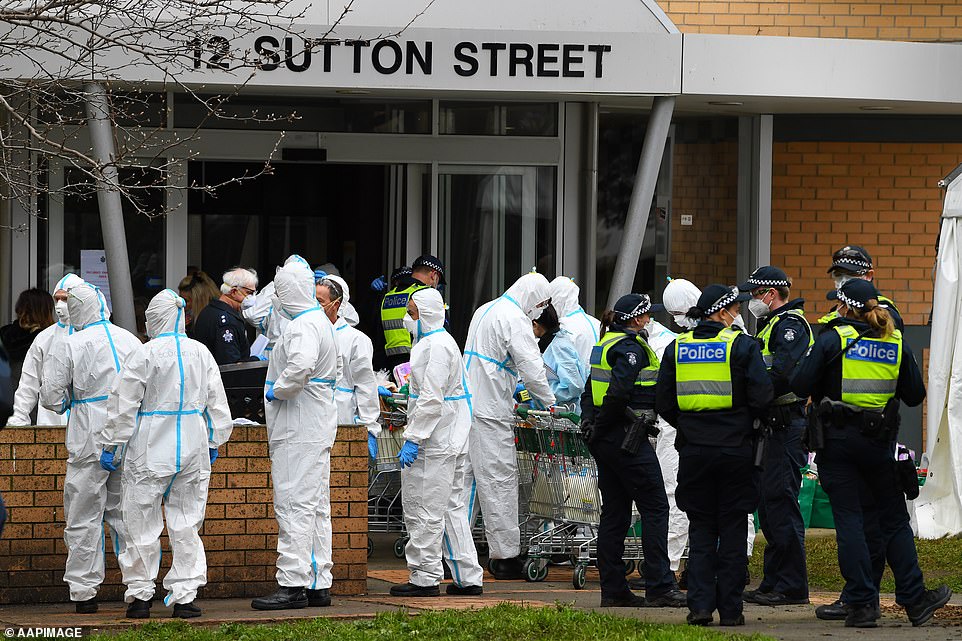 Earlier today federal health minister Greg Hunt said broadening the lockdown in Victoria was on the table. Pictured: Firefighers in hazmat suits and police at a north Melbourne tower block 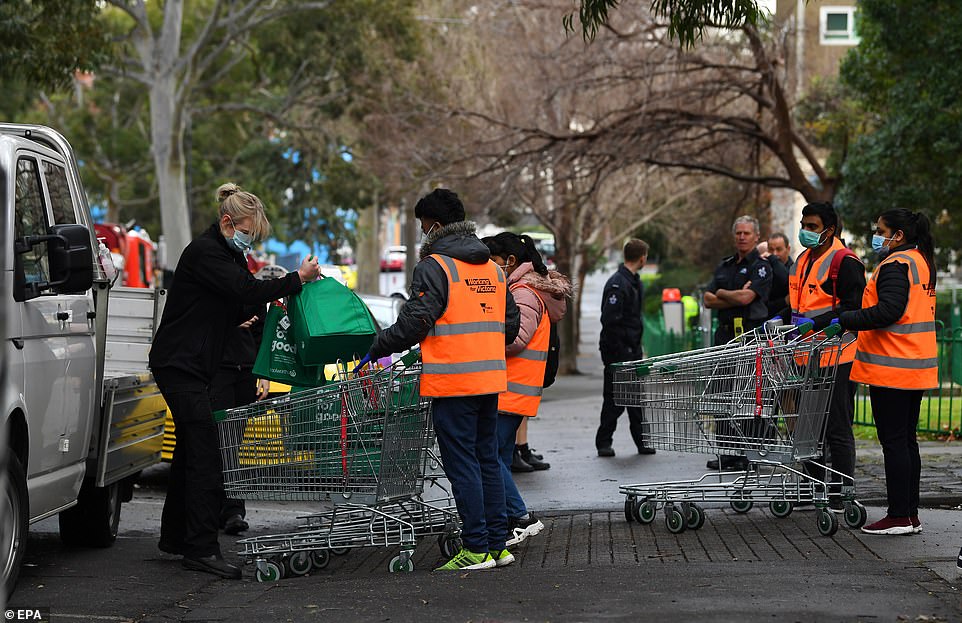 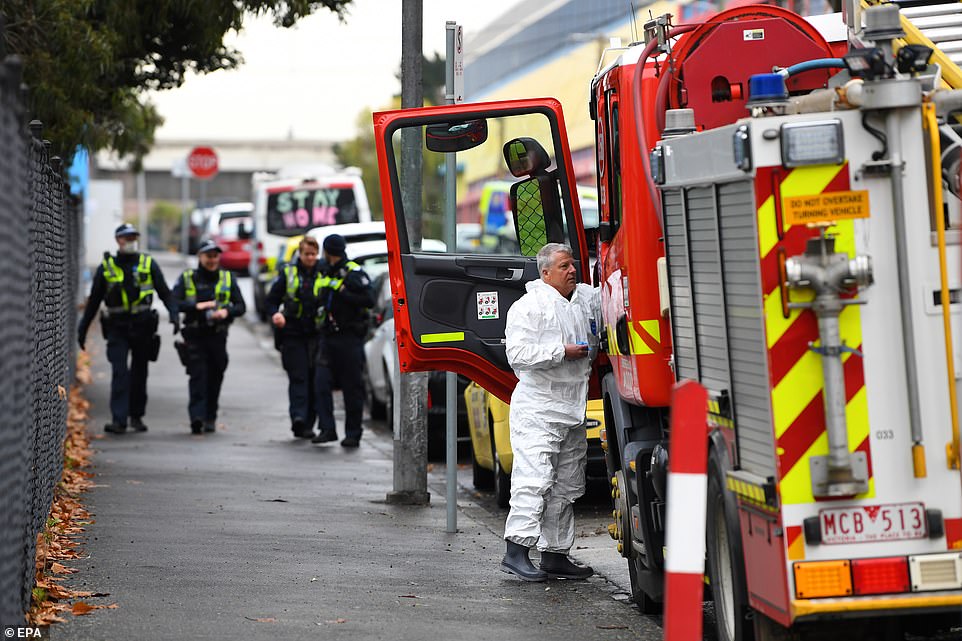 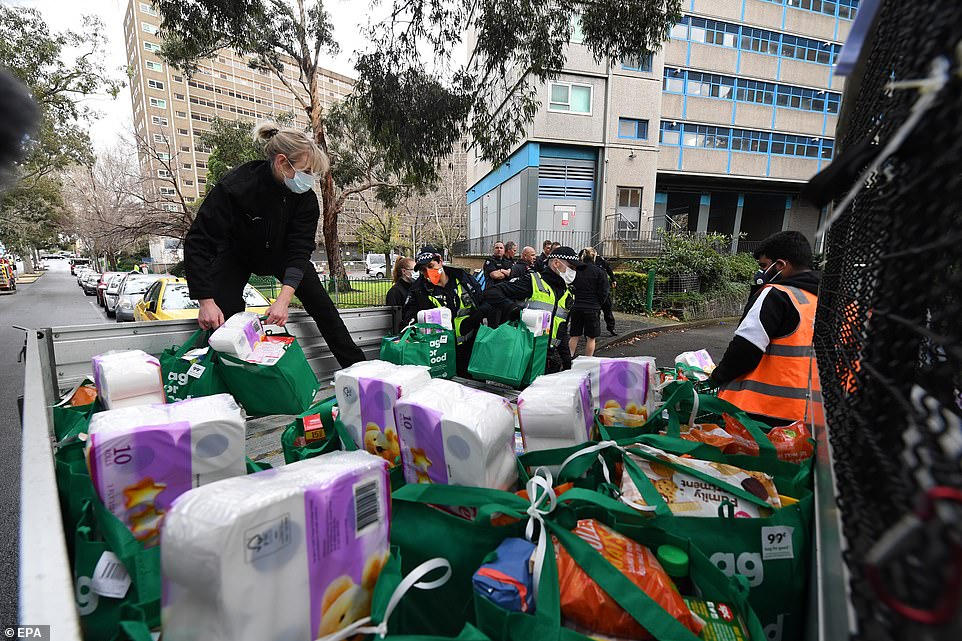 Where are Victoria’s new coronavirus cases?

* 13 infections relate to the North Melbourne and Flemington public housing towers, with the total now 69

* 12 new cases are linked to the Al-Taqwa College outbreak, bringing that total to 90

* Four new cases have been linked to the Northern Hospital in Epping, with the total now nine.

* One new case has also been confirmed in a staff member at the Assisi Aged Care facility in Rosanna, who did not work while infectious

In a letter to the federal Acting Chief Medical Officer, Victoria’s Department of Health and Human Services, Premier Andrews and Victoria Police, the association describes how residents were forced to wait 24 hours for food and other essentials like baby formula, nappies and medication.

When the food arrived it was ‘at best, questionable pre-packaged meat-like food items that do not look suitable for human consumption’.

‘Furthermore, the delivery of the food was tossed to the floor on a single piece of paper in front of the residents’ apartment doors in small portions of one food item per household,’ the letter said.

One carpet-cleaner described the conditions as ‘worse than prison’ because residents are not allowed outside.

Dozens of cases from the Melbourne outbreak have been traced back to breaches in the hotel quarantine system after private security guards interacted with patients and took the virus home to their families.

As Victoria battles a snowballing outbreak, NSW reported seven new cases of COVID-19 on Tuesday from 9,746 tests, including a man who tested negative in hotel quarantine before returning home to Newcastle on Sunday and developing respiratory symptoms. He and his close contacts have been placed into isolation.

The other six cases were in travellers in hotel quarantine. Two probable coronavirus cases are being investigated in the Albury area after returning positive results on preliminary testing in the Murrumbidgee Local Health District.

Health officials said the two cases were undergoing further testing but had not yet been included in the state’s confirmed case load.

One suspected case had recently been to Melbourne but returned before hotspot travel restrictions came into force.

NSW Health is setting up a pop-up clinic in Albury from Tuesday and is urging residents in the area with even mild symptoms to get tested. 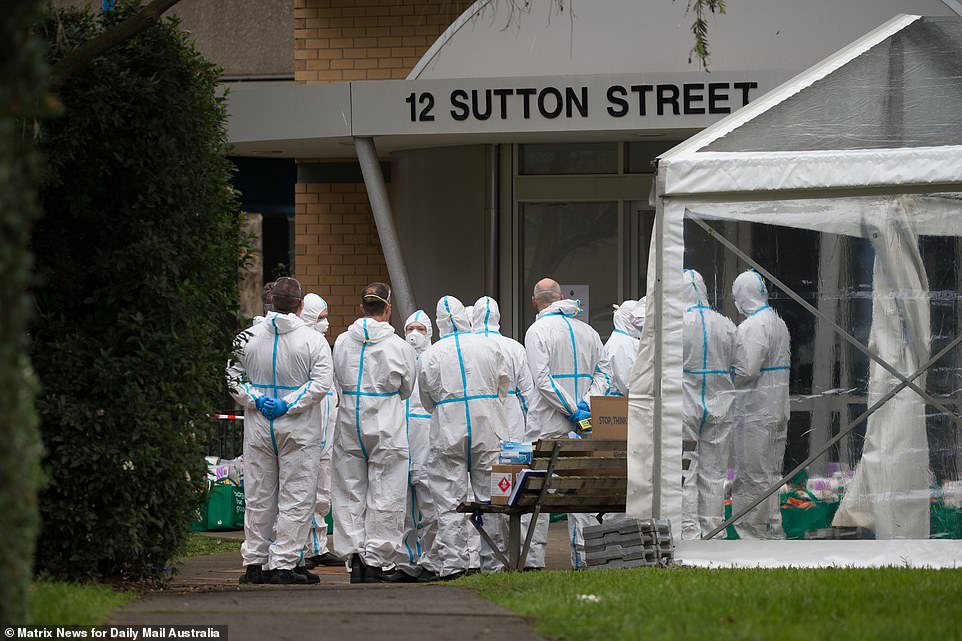 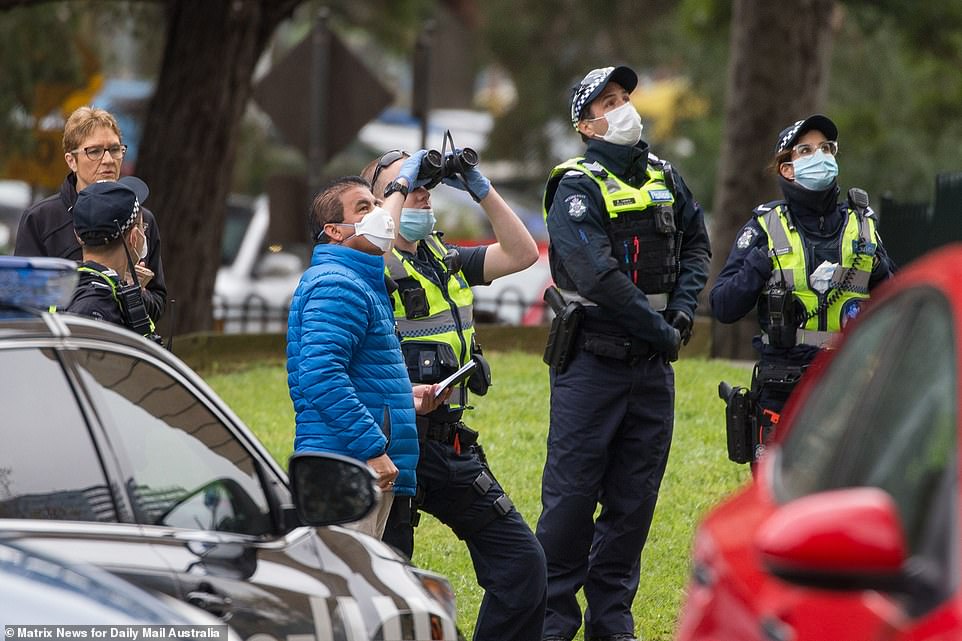 NSW Police Minister said the Victorian government should help pay for the shut down from Tuesday night.

‘I would think that would be the decent thing to do, given this is an outbreak that’s caused by a situation in Melbourne,’ he said.

‘But we can’t rely on other governments to do the right thing all the time.

‘So as far as the New South Wales Government is concerned, we’ll be providing the financial support that’s necessary.

‘Obviously with the defence aid, that comes within each individual agreement, the application that’s made.’

‘I feel for the people of Melbourne who have certainly tried to do the right thing. But they’ve been let down by a number of circumstances.’

Queensland recorded its first case of the virus in two weeks on Tuesday, a soldier who returned from overseas and tested positive in hotel quarantine.

South Australia recorded zero new cases and announced that it was ramping up border measures to completely ban Victorians by removing the option for them to quarantine for two weeks upon arrival from midnight tomorrow.

Since last Monday Victoria has detected 823 new infections, only 14 of whom are returned overseas travellers in hotel quarantine.

This is radically different from the spike in cases across several states in late March and early April which saw large numbers of returning Australians test positive.

Locally acquired cases are more dangerous because the patients are not in quarantine and can more easily transmit the virus around the community.

Paul Komesaroff, Professor of Medicine at Monash University, told Daily Mail Australia the situation in Victoria, where 12 postcodes have been put back into lockdown, is alarming.

‘It is an extremely dangerous situation and the safety of the entire country is at stake,’ he said. 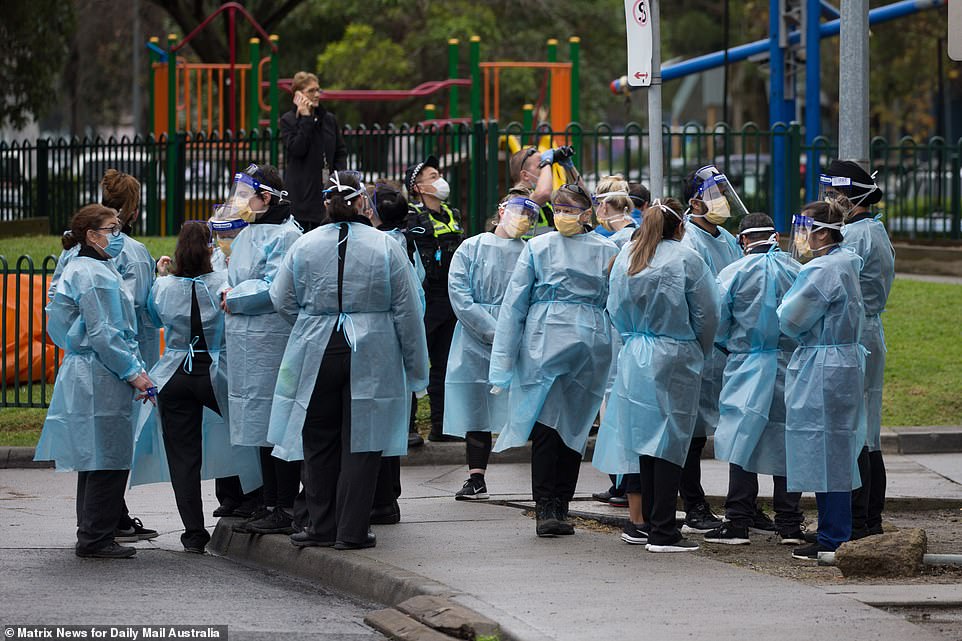 Since last Monday Victoria has detected 823 new infections, only 14 of whom are returned overseas travellers in hotel quarantine. Pictured: Covid testers in Melbourne on Tuesday 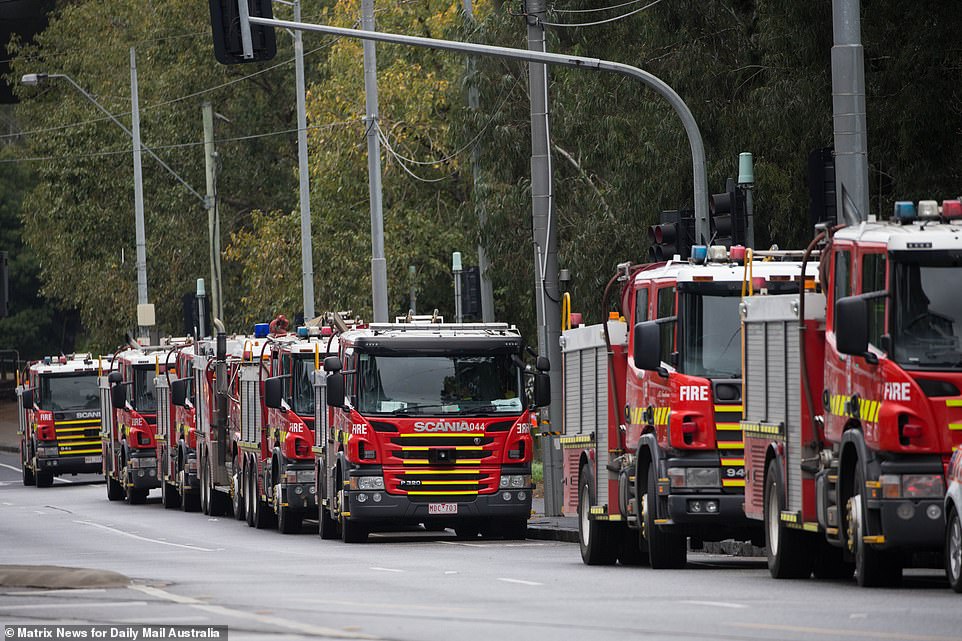 8 Fire trucks are seen parked on Mount Alexander Road out the front of the commission flats at 130 Racecourse Road. 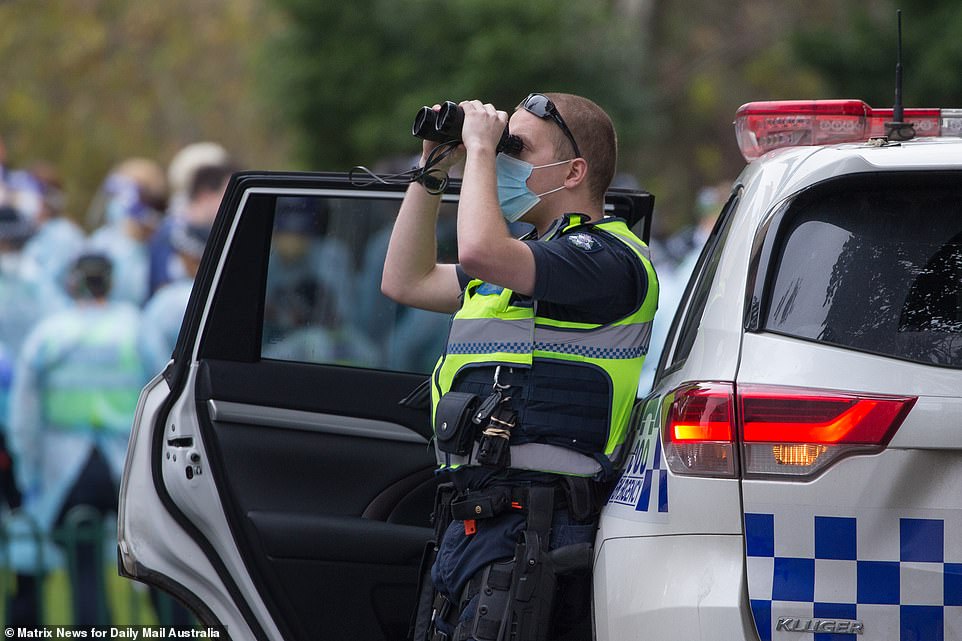 Thirteen new cases are linked to nine Melbourne tower blocks which have suffered 69 cases and been placed under hard lockdown since Saturday. Pictured: A policeman on Tuesday at the north Melbourne towers

‘Clearly there is a major problem that has required draconian measures which should be supported by Victorians to protect their safety.

Professor Komesaroff said he supported the border shut downs and localised lockdown measures which have proved successful in other countries such as South Korea and Singapore.

‘This a very different situation that we haven’t seen previously and we have to do what he have to do,’ he said.

‘The vast majority of cases that New South Wales and other states were experiencing were from overseas travellers or the direct contacts,’ she said.

‘All of the cases that the Premier Andrews announced today are from community transmission.

‘This is unprecedented in Australia. That is why the decision of the New South Wales Government [to shut the border] is unprecedented. We have not seen anything like this.’

There are 55 NSW-Victoria border crossings over more than 1,000 kilometres and they will be manned by police and soldiers with drones and road blocks when the border is shut from 12.01am tonight.

Anyone entering NSW from Victoria without a permit will be fined $11,000 and could face six months in jail. 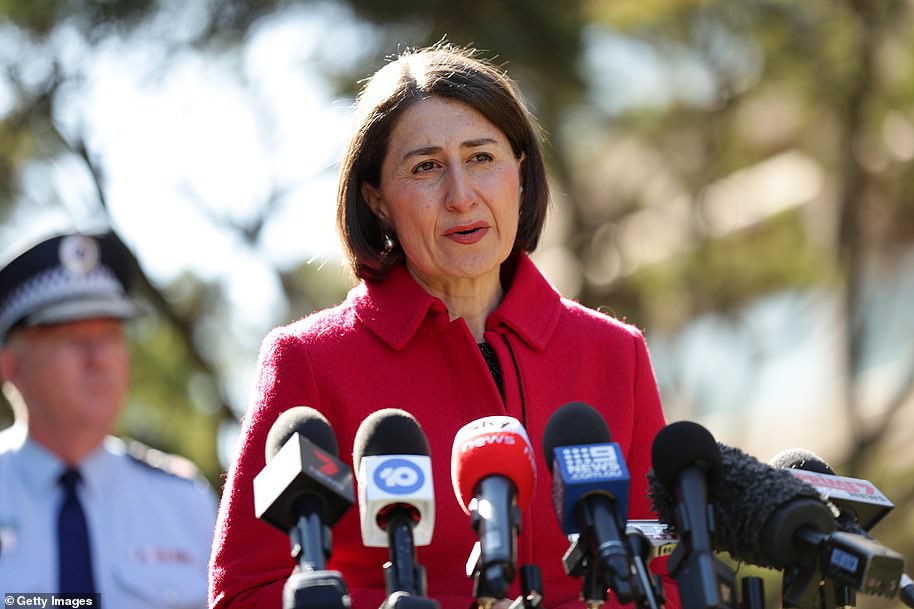 South Australia said it would open up to NSW and the ACT but not Victoria on 20 July.