A modern-Italian restaurant has divided foodies on social media after creating what’s believed to be Australia’s first ever pasta in a jar.

The new menu items will be served to customers once dine-in reopens across Victoria – as the state remains under lockdown orders due to spiralling Covid cases.

‘Our pasta jars more cheesier and they’re baked as well which gives a real kick. The best part of our pasta in a jar is it stays hot right till the end of your last bite,’ Rajan, owner of Barkly’s Kitchen, told Daily Mail Australia. 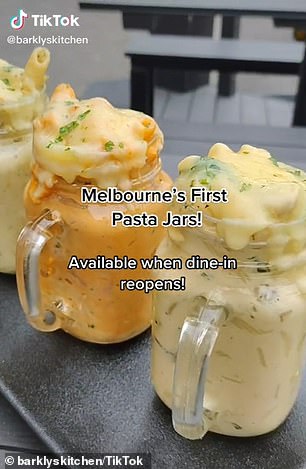 Would you try pasta in a jar?

While many are skeptic about the new creation, Rajan said don’t knock it until you try it.

‘There is lot more to these pasta jars that people would love to know about,’ he said.

He said the $20 pasta in a jar comes in three different flavours such as green pesto (vegetarian), cream chicken mushroom and Barkly’s special – red pesto with chicken and bacon.

While many applauded the restaurant for its ‘innovative idea’, others said the pasta jars seem ‘messy’, ‘difficult to eat’ and ‘super inconvenient’.

‘This is so embarrassingly Melbourne,’ one joked.

‘Let’s put pasta normally served in a bowl into a jar for no reason at all. Why? Yeah nah. Pass,’ another wrote.

One said: ‘Not hating but I’m wondering what the benefit is to the jars? It makes sense for milkshakes because you fit more in.’

Another asked: ‘Is this a joke though? The pasta loos delicious, would love to eat it… from a bowl,’ while one joked: ‘And you get your garlic bread served in a shoe.’ 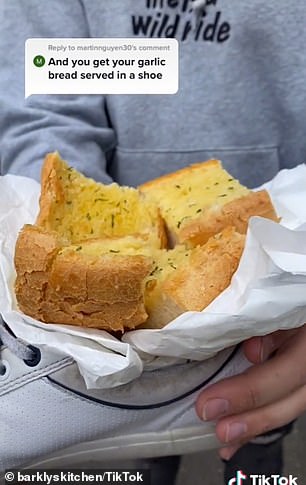 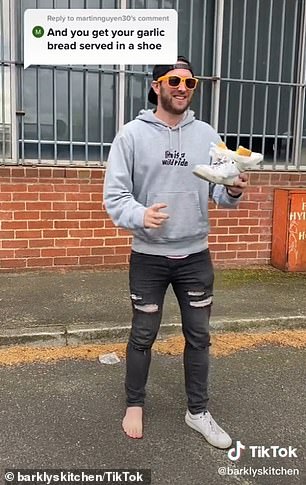 In a follow up TikTok video, the restaurant responded to critics by serving garlic bread in a worn sneaker.

‘You asked, we delivered,’ the cheeky caption read.

The video shows freshly baked garlic bread served in a shoe while another clip shows an employee dancing with the dish in question.

Many quickly saw the funny side, with one woman saying: ‘OK I respect you… I’ll eat your pasta in the jar.’

While another said: ‘Oh my god, this is the best. I will definitely try your pasta in a jar.’