Men who eat a lot of beef, lamb, pork and other red meats may be insecure about their masculinity, a new study suggests.

Researchers in Canada have found men suffering from ‘masculinity stress’ are more likely to try and ‘augment their masculinity’ by eating red meat, which is generally perceived as more masculine.

Masculinity stress describes an individual male worrying about their masculinity or fretting that they’re being ‘man enough’.

It’s not known why exactly red meat is perceived as masculine in some societies, although it may be seen as a way to build muscle, helping boost stereotypical male qualities like virility and sexual strength.

Male-related language in food marketing, such as Burger King ads that feature crude sexual innuendos, may also be to blame.

Masculinity stress describes an individual male worrying about their masculinity or fretting that they’re being ‘man enough’.

It arises from a perceived discrepancy with male gender norms, such as drinking pints and playing sports.

University of Lethbridge experts have found masculinity stress causes men to play up to another gender norm – eating red meat.

The new study has been led by Rhiannon MacDonnell Mesler at the University of Lethbridge, Alberta, Canada.

‘Our results suggest that men concerned about their masculinity may seek opportunities to augment their manhood through the food that they consume,’ she said.

‘They also indicate that affirming masculinity can serve a reinforcing function that one is indeed “man enough” which, in turn, should reduce the need to restore masculinity through red meat consumption.’

Previous research has found that consumption of red meat is believed by both men and women to be associated with masculine qualities such as virility, mating desirability and sexual strength.

The new study cites criticism of a 2009 Burger King advert that depicts a ‘long and juicy’ burger floating in front a woman’s parted lips – a euphemism for oral sex – with the tagline ‘It’ll blow your mind away’.

In the first stage of the study, 300 male participants from the UK, the US and Canada were assessed for masculinity stress, how far they conform to traditional masculinity, and their intention to purchase red meat.

Of the total, 13 were removed from the study after revealing they were vegetarian or vegan, leaving a final sample of 287 male meat eaters.

Masculinity stress was determined by questions such as, ‘I wish I was interested in things that other guys find interesting’ and ‘I worry that women find me less attractive because I’m not as macho as other guys’.

Next, participants were told about a new product called ‘The Butcher Box’, which delivers packaged meats to homes. 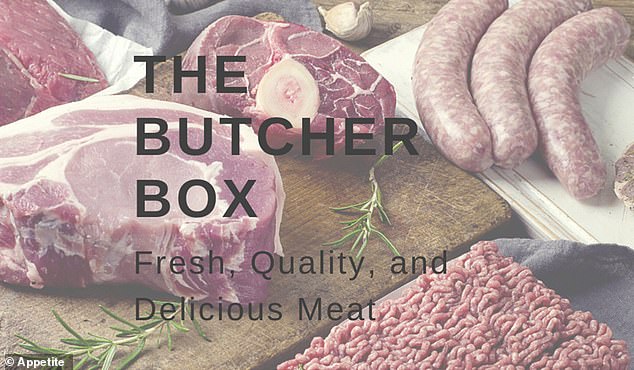 Levels of masculinity stress were compared with intentions to purchase from ‘The Butcher Box’, which delivers meats to the home

THE UK’S DAILY MEAT CONSUMPTION IS DOWN 17%

Daily meat consumption in the UK has fallen by 17 per cent across the last 10 years, a 2021 study found, but is still not dropping quickly enough to meet a national target.

The study, published in The Lancet Planetary Health, revealed that most people are eating less red meat and processed meat than a decade ago.

Despite the promising drop, the data from the National Diet and Nutrition Survey – which looks at 15,000 people’s eating habits – found people are eating more white meat than they were ten years ago.

Read more: Daily meat consumption in the UK is down 17% in the last decade

Following a description of the product, they were then asked ‘How inclined are you to purchase a meat box containing 8 prime cut steaks, 24 sausages, and 6 pounds of lean ground beef?’.

Additionally, participants stated the extent to which they agreed on a set of beliefs about the relationship between manhood and food consumption.

These included ‘some foods are more manly than others’, ‘real men eat meat’, ‘there are some foods that are simply girly’ and ‘when I eat meat, I feel like a man’.

The results showed that the men with high masculinity stress were more likely to believe that eating meat will increase their masculinity and, consequently, were more inclined to purchase red meat.

In the next part of the study, another 200 male participants from the same three countries completed a masculinity questionnaire and were told their answers would be used to validate ‘a new measure of masculinity’.

Respondents were randomly assigned to receive feedback intended to either affirm or refute their masculinity (i.e., ‘our algorithm indicates you are more/less masculine than 85 per cent of the population’).

They were then offered the choice of four main-course items from a cafeteria menu – a meatball sub or a bacon sandwich (‘manly’ red meat choices) or a salad with chicken or a salad with tofu (non-manly choices). 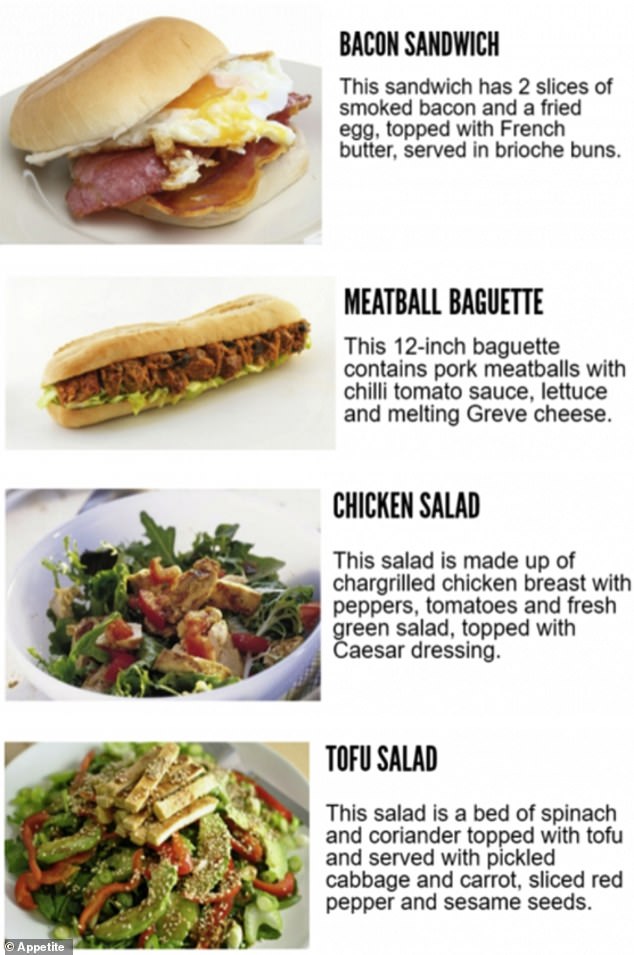 Which of these dishes would you pick from this menu? There are cultural stereotypes of ‘manly’ men preferring a meat dishes and women preferring a chicken or tofu salads, the study suggests

The results showed that affirming participants’ masculinity reduced the likelihood that they would choose either of the red meat choices.

‘However, we would caution marketers that this could paradoxically increase females’ meat consumption, and thus not reduce consumption overall,’ they say in their paper, published in the journal Appetite.

The research follows another study published earlier this year in the same journal, which found men like to eat more meat than women because they feel it helps ‘to enact and affirm their masculine identity’.

A greater conformity to traditional male gender stereotypes was associated with both more frequent consumption of two types of meat – beef and chicken – and lower levels of openness to vegetarianism, it found.

The NHS says red meat is a good source of protein, vitamins and minerals, and can form part of a balanced diet, but eating too much of it increases your risk of bowel cancer.

Red meat consumption has already been linked to heart disease – the world’s biggest killer – as well as rectum cancer.

Meat-heavy diets not only risk our health but that of the planet, as livestock farming on a massive scale destroys habitats and generates greenhouse gases.

SHOULD YOU CUT BACK ON RED MEAT? WHAT THE EVIDENCE SAYS

Meat is a good source of protein, vitamins and minerals in the diet.

The Department of Health advises that we eat no more than 70g (cooked weight) of red and processed meat a day, which is the average daily consumption in the UK.

A 2011 report called Iron and Health from the Scientific Advisory Committee on Nutrition (SACN) assessed evidence on the link between bowel cancer and iron – meat is the main source of iron.

SACN concluded that eating a lot of red and processed meat probably increases the risk of bowel cancer, and advised accordingly.

The American Institute for Cancer Research advises we consume no more than three portions of red meat a week and urges us to ‘avoid’ processed meats.

Processed meat often contains nitrogen-based preservatives that stop it going off while being transported or stored.

These preservatives have been linked to both bowel and stomach cancer.

When red meat is digested, the pigment haem gets broken down in our gut to form chemicals called N-nitroso compounds.

These compounds have been found to damage the DNA of cells that line our digestive tract, which could trigger cancer.

Our body may also react to this damage by making cells divide more rapidly to replace those that are lost.

This ‘extra’ cell division may increase the risk of cancer.

Cancer Research UK says three chemicals in meat are linked to bowel cancer because they damage cells in the gut.

Red and processed meat has also been linked to type 2 diabetes.

This may be due to the preservatives used or the meats’ higher levels of saturated fat than chicken and fish.

However, researchers in Canada, Spain and Poland cast a shadow over eating advice adopted by health organisations around the world in November 2019.

In a landmark paper, the academics analysed past studies of how eating meat affected the health of more than four million people.

The research, published in the journal Annals of Internal Medicine, found no evidence that eating beef, pork and lamb could increase the rates of heart disease, cancer, stroke or type 2 diabetes – despite fears.