Endangered animal species could be saved from extinction after a new study has shown that mice cloned from freeze-dried cells are able to successfully grow into adults and become parents.

Researchers in Japan have used freeze-dried somatic cells – animal cells other than sperm and egg cells – to clone mice.

Cloned males and females were able to mate with other normal mice and produce their own healthy offspring.

The team’s method could bring animal species back to life after they’ve gone extinct in the wild, as long as their cells have already been ‘banked’.

Somatic cells are the cells in the body other than sperm and egg cells (which are called germ cells).

All organisms that are alive are made of one or more cells that are called somatic cells.

In humans, somatic cells are diploid, meaning they contain two sets of chromosomes, one set inherited from each parent.

Somatic mutations can impact the individual carrying the mutation, but cannot be passed on and have no effect on the offspring.

‘We show that freeze-dried somatic cells can produce healthy, fertile clones,’ say the researchers, from the University of Yamanashi in Kofu, Japan.

‘This technique can still be used to the available genetic resources in extreme circumstances, such as almost extinct species.’

Currently, scientists tend to store frozen animal egg cells and sperm cells – and preserve the DNA within them – using liquid nitrogen, a cryogenic fluid with a temperature of -320°F (-196°C).

However, because this temperature is so low, these liquid nitrogen ‘bio-banks’ can be expensive to run and maintain, the study authors claim.

Also, liquid nitrogen ‘bio-banked’ stores that contain these egg cells and sperm cells are easily disrupted during disasters, such as earthquakes.

Instead, the researchers freeze-dried and stored mice cells for nine months at just -22°F (-30°C).

Although the mice cells died at this temperature, the team was able to create embryos (fertilised eggs).

They managed to do this by transferring the nuclei – the central, controlling part of the cell – from the dead frozen cells into non-frozen egg cells.

They then used these embryos to rescue the DNA and produce cloned mice with a success rate of 0.2 per cent to 5.4 per cent.

Graphic shows the procedure for production of cloned mice from somatic cells. The somatic cells were preserved at at -22°F (-30°C) for up to nine months

The team then selected nine female and three male cloned mice and mated them with normal males and females. All the clones were found to be able to successfully interbreed and carry pups.

The authors admit that freeze-drying causes more DNA damage than storing cells via current methods, but this could be a trade-off for cheaper cell storage.

Dr Alena Pance, a genetics lecturer at the University of Hertfordshire who was not involved in the study, said the capacity to store genetic material is ‘extraordinarily important’ but pointed out the team’s low success rate for producing cloned mice.

‘The capacity to store genetic material is extraordinarily important, not just to maintain samples of species but also their genetic variation,’ she said. 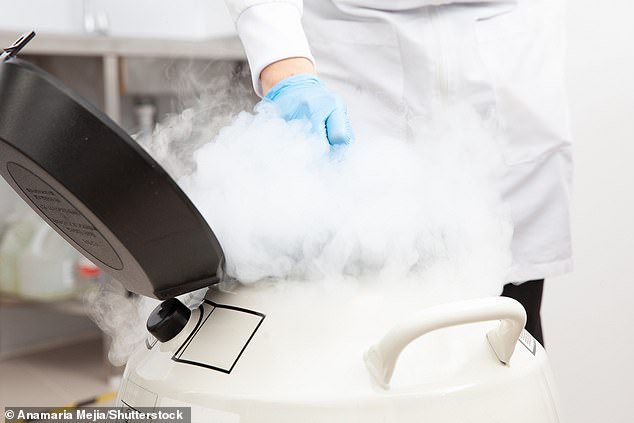 Currently, scientists store frozen animal egg cells and sperm cells – and preserve the DNA within them – using liquid nitrogen, a cryogenic fluid with a temperature of -320°F (-196°C)

‘Furthermore, cheaper and more effective techniques to bank genetic material would be very helpful for the storage of existing resources of cell lines, stem cell lines and a wide variety of samples.

‘The approach… offers an alternative to present banking methods and certainly allowing more permissive temperatures would be a great advantage – however, the technique described is very laborious, with a low success rate.’

Dr Pance also said freeze-dried cells would have to be stored for longer than nine months to ‘provide an effective long term preservation of species and samples’.

Dusko Ilic, a professor of stem cell science at King’s College London not involved in the work, pointed out that freeze-dried cells have already been used to develop living mice, sheep and rabbit clones in previous studies.

Professor Ilic said: ‘This paper does not represent much of an advance beyond what had already been done previously.’

The study has been published today in the journal Nature Communications.

In a potential breakthrough for regenerative medicine, scientists have created the first-ever living robots that can reproduce.

The millimetre-sized living machines, called Xenobots 3.0, are neither traditional robots nor a species of animal, but living, programmable organisms.

Made from frog cells, the computer-designed organisms, created by a US team, gather single cells inside a Pac-Man-shaped ‘mouth’ and release ‘babies’ that look and move like their parents.