They announced the end of their seven-year marriage in February last year.

But Michael and Kyly Clarke appear to still remain on very good terms since their split, as they continue to co-parent their daughter Kelsey Lee, five, together.

On Friday, the retired cricketer, 40, was spotted dropping off his little girl at her mother’s home in Bondi, before the pair spent a fun-filled day at a local playground.

Dad duties! On Friday, cricketer Michael Clarke was spotted dropping off his daughter Kelsey Lee to her mother’s house in Sydney’s Bondi

Michael appeared in high spirits for the brief drop-off, wearing a black T-shirt, a khaki puffer jacket and black shorts.

While he and Kyly, 39, weren’t pictured together, the fitness guru soon stepped out with her daughter to take her for some exercise at Parsley Bay Reserve in Vaucluse.

Kyly – dressed in a bright red puffer jacket, white T-shirt and grey jogging bottoms – couldn’t wipe the smile off her face as she enjoyed a quick jog on the grass with her beaming daughter.

She then whipped off her coat as the duo played on the nearby playground, with Kyly lifting up her little one so she could swing safely on the monkey bars. 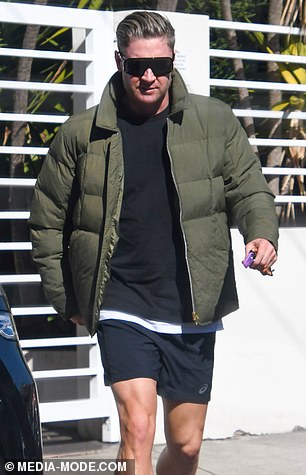 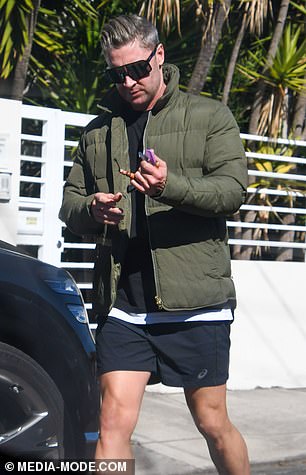 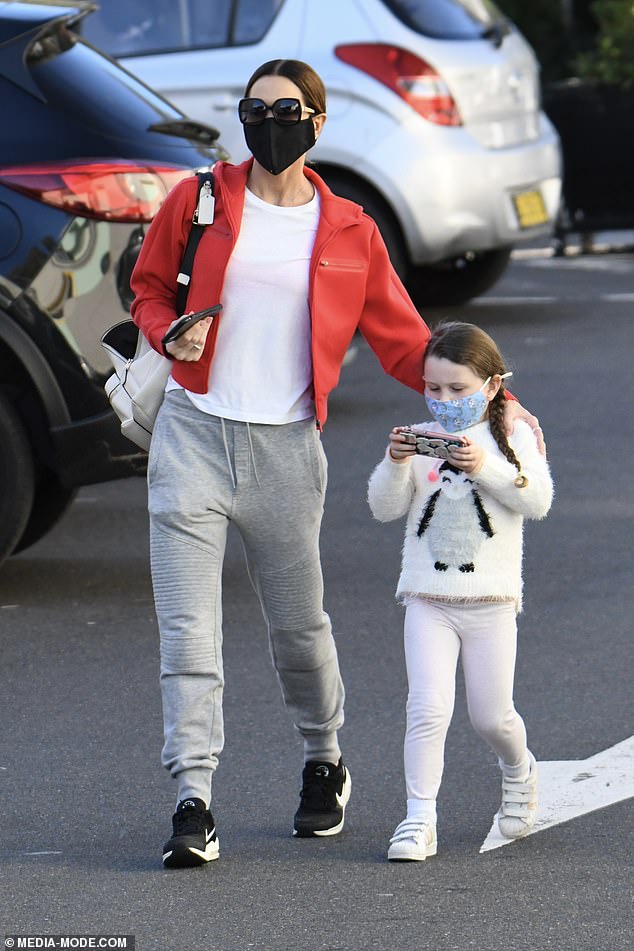 Heading out: While he and Kyly Clarke, 39, weren’t pictured together, the fitness guru soon stepped out with her little girl to take her for some exercise at Parsley Bar Reserve in Vaucluse 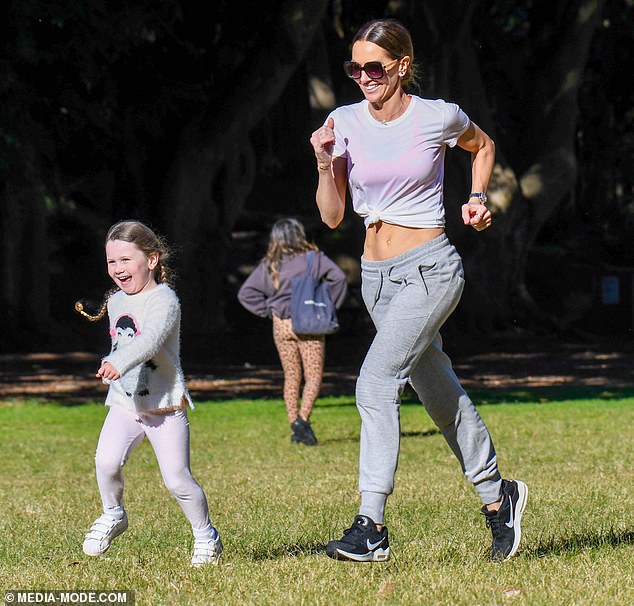 Ready, set, go! Kyly was seen running with her little girl on the park, who couldn’t stop smiling as the pair spent some quality time together 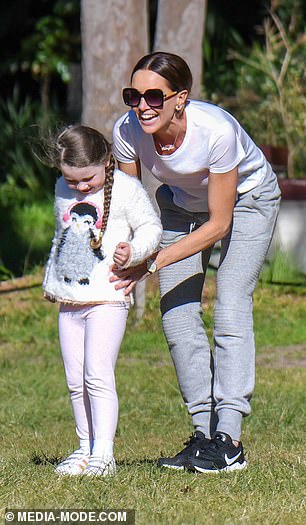 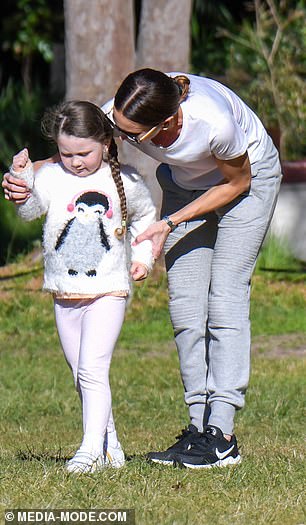 Cute! Kelsey Lee was wrapped in an adorable penguin sweater and white leggings 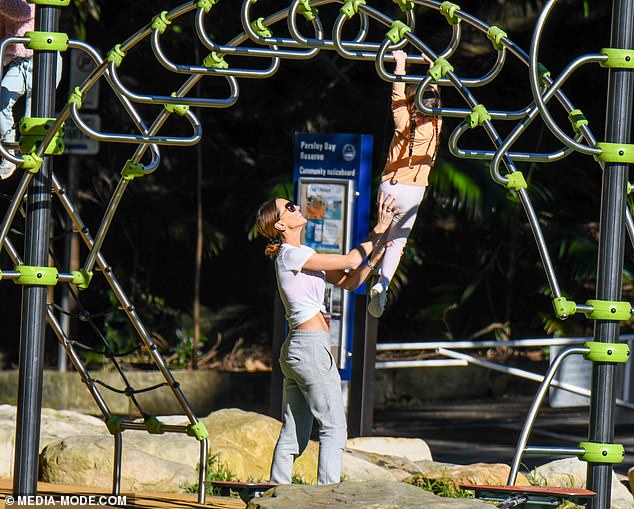 Super mum! Kyly then whipped off her jacket as the duo played on the local play area, with Kyly lifting up her little one so she could swing safely on the monkey bars

Kyly then took some photographs of her daughter on her iPad, before helping her with a handstand on the grass area.

Last month, the property developer was forced to deny rumours she’d reunited with her ex-husband after the pair were spotted holidaying together in Sydney’s Palm Beach.

She added that her ex-husband had pretty much settled the rumours when he spoke to KIIS FM a few days earlier.

Michael had told The Kyle and Jackie O Show their weekend in Palm Beach was actually just a family trip and not a romantic getaway. 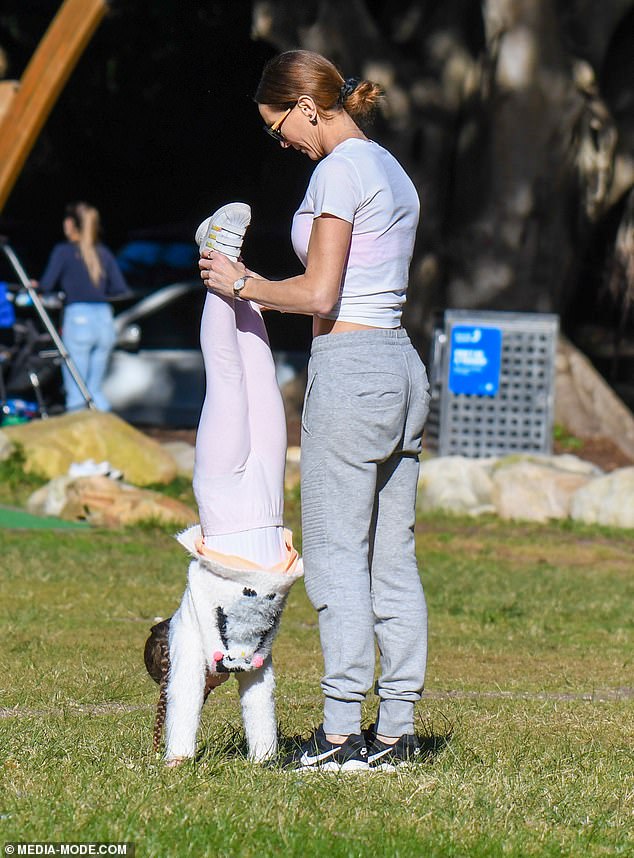 Talent: Kyly was later seen helping her daughter with a handstand on the grass area 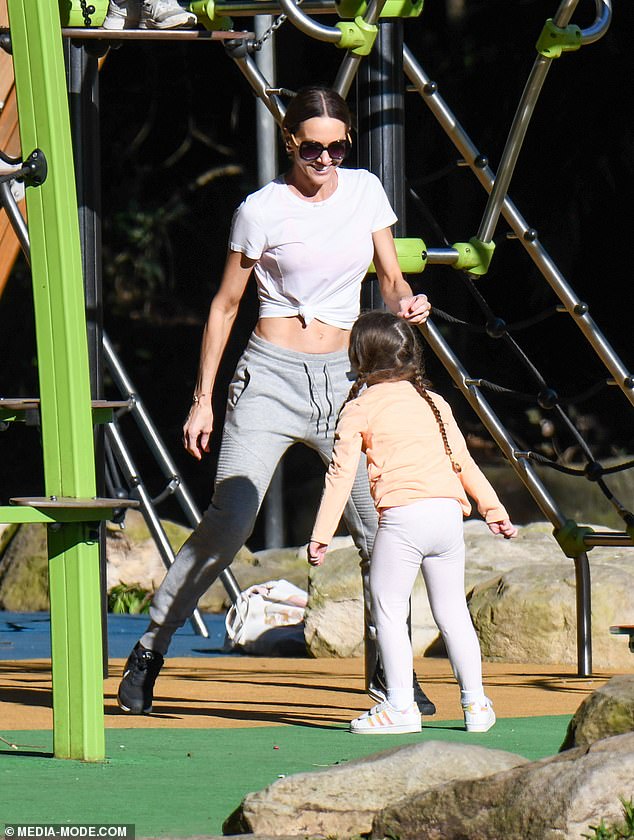 Catch me if you can! Kyly was all smiles as she enjoyed some fitness fun at Parsley Bar Reserve 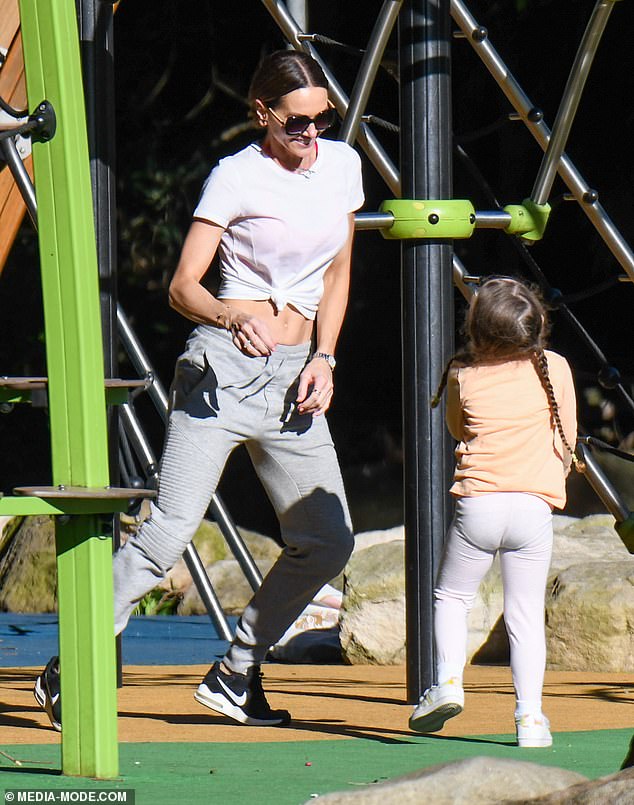 Go! Little Kelsey Lee was seen bursting into laughter as her mum attempted to catch her in a game by the jungle gym 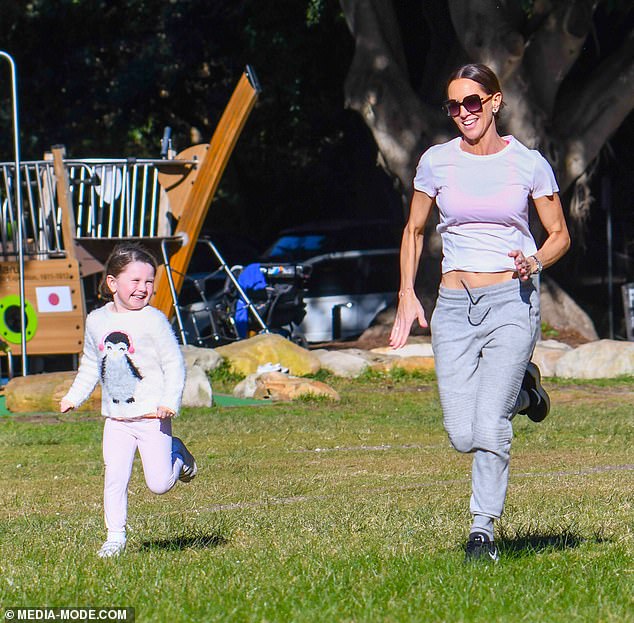 Race: The fitness guru didn’t even appear to break a sweat as she darted through the field in her athletic gear 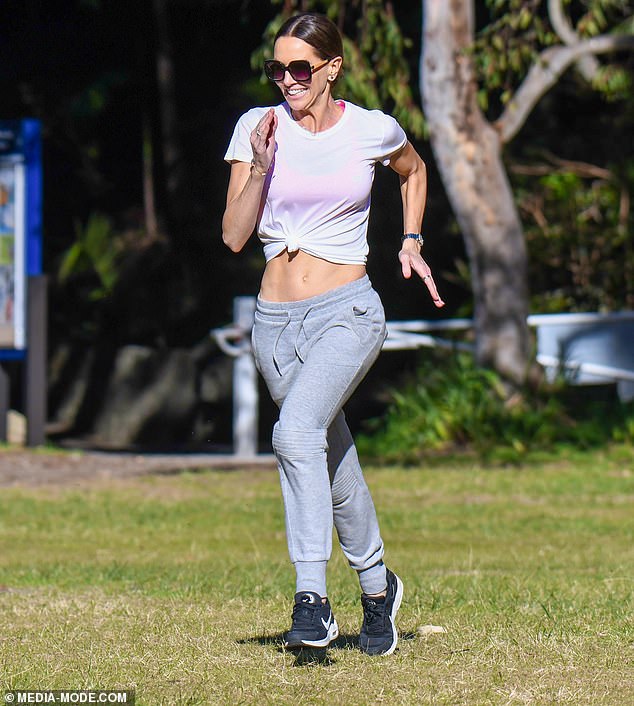 Epic physique: Kyly flashed a hint of her abs as she exercised underneath the Sydney sunshine 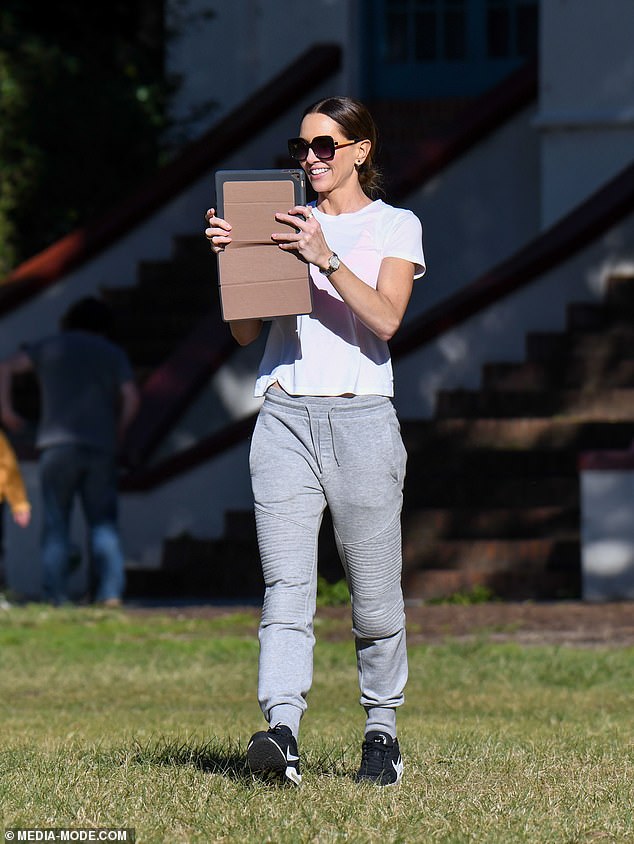 Making memories: She then grabbed her iPad to take some cute photos of the pair’s fun-filled adventure day

He also revealed the exes were ‘great friends’ despite their marriage split and that he still speaks to his ex-wife ‘almost every day’.

‘It was a family holiday and great opportunity to get everyone together,’ she added, noting that Michael’s sister and her husband were also present.

‘Kelsey Lee’s auntie, uncle and cousins were there, and I think like with anything you try to prioritise your daughter, and she really had a ball,’ she said.

Michael and Kyly split in September 2019 after seven years of marriage, but didn’t reveal their break-up until February 12, 2020. 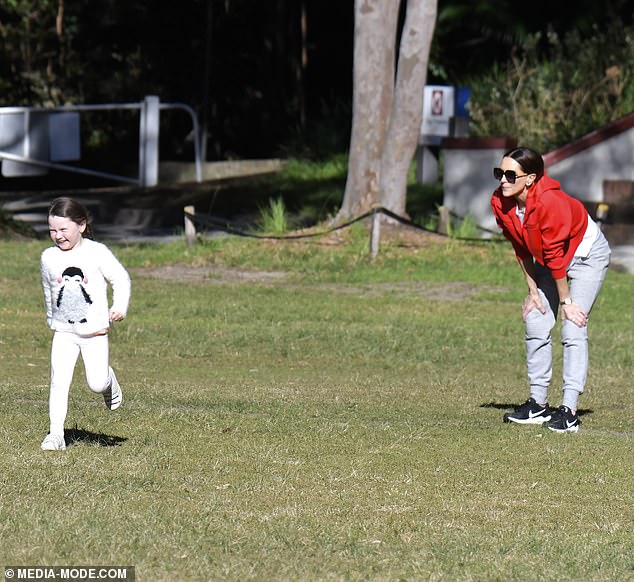 Not a thing: Kyly last month denied claims she was getting back together with Michael, after the pair enjoyed a family holiday together in Palm Beach 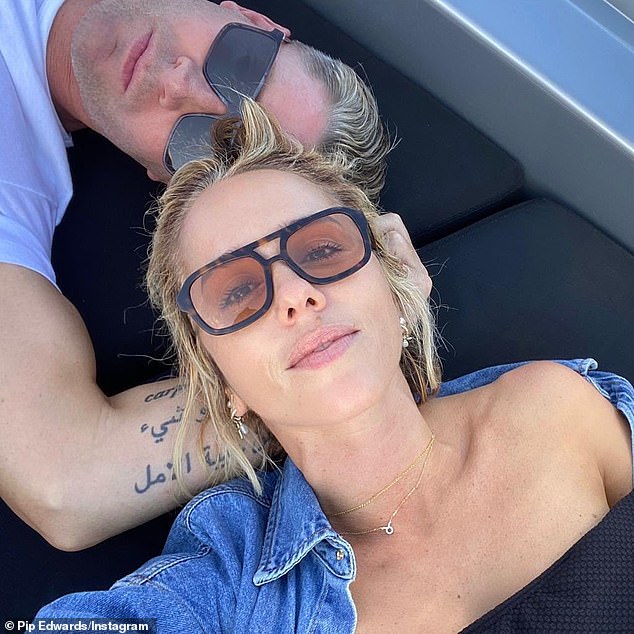 Case of the ex: Shortly after ending his marriage, Michael began dating Pip Edwards, with whom he’d been friends for more than a decade. But they split earlier this year

In a statement at the time, the Clarkes said the ‘amicable’ decision to separate was ‘the best course’ for their daughter, Kelsey Lee.

Shortly after ending his marriage, Michael began dating Pip Edwards, with whom he’d been friends for more than a decade.

However, these relationships didn’t last: Michael and Pip called it quits in February after dating for about seven months, while Kyly and James broke up in December. 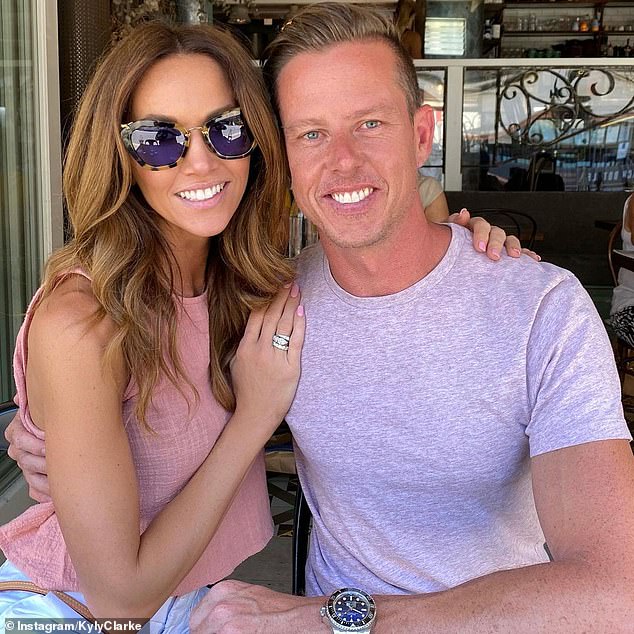 Over: Meanwhile, Kyly enjoyed a fling with V8 Supercars champion James Courtney last year – however they too split up in December