This should be quite the week for Michael Douglas and Catherine Zeta-Jones: yesterday, husband and wife jointly celebrated significant birthdays, with Michael reaching the grand old age of 75 and the ever-youthful Catherine turning 50.

An excuse for a huge Hollywood party, you might expect — but the reality is quite the opposite. In fact, last week, Michael admitted that he and Catherine wanted to ‘hide’ rather than celebrate publicly.

Indeed, rather than revelling in the attention a big bash would bring — they spent their birthdays playing a quiet game of golf — both appear to be taking stock of their lives.

Michael Douglas, pictured with his wife Catherine Zita Jones are seeking to sell part of their property portfolio with three magnificent properties worth an estimated £46 million 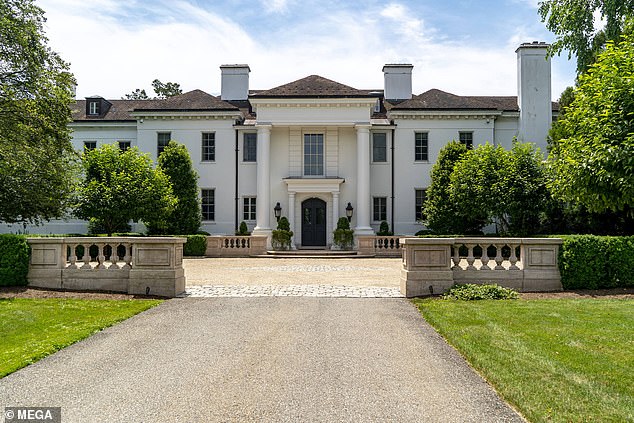 Michael Douglas and his wife Catherine Zeta Jones are looking to sell their New York Mansion, pictured for £12 million 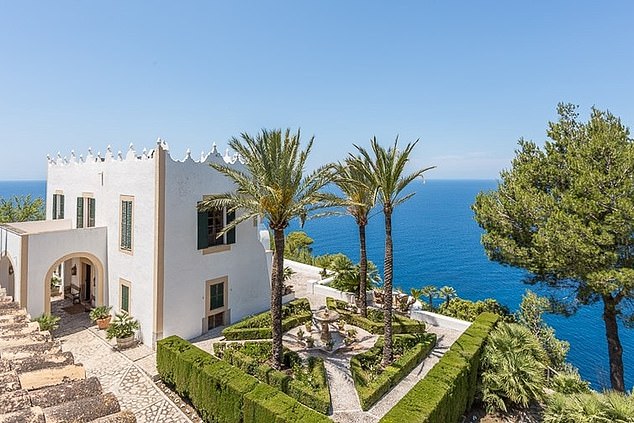 Their Mallorcan palace, pictured, is also understood to be available to purchase for £26m

In keeping with this mood, and with a distinctly rocky period in their marriage including an unofficial separation behind them, they seem to be trying to make a very fresh start — starting with one almighty property sale that could land them a huge £46.5 million payday. Their spectacular mansion in upstate New York — the main family home for Michael, Catherine and their two children Dylan, 19, and Carys, 16 — has been sold for a whopping £12 million, while two more of their lavish homes, in Bermuda and Mallorca, are on the market for £8.5 million and £26 million respectively.

It’s quite a potential windfall — understandably tempting to cash in on, even for Michael, who is worth an estimated £120 million.

But apart from finances, is there anything more behind the great Douglas downsize?

While Catherine’s publicist, Cece Yorke, is rather opaque on the reasons for the dramatic sell-off — merely saying, ‘All is well. They are simply selling some of their investments’ — Michael’s spokesman, Allen Burry, is far more illuminating.

He said: ‘Michael loves their properties but to have the responsibility and expenditure at this time didn’t seem to make much sense.

‘When the kids were younger, they visited more often. Now, everybody wants to do their own thing. It just made more sense while property prices are positive to downsize.’

He added: ‘The kids grew up and one is already in college and the other follows next year.’

Dylan was waved off to college last year by his emotional parents and the couple are preparing for Carys to leave the nest as well.

So profound is the sense of upheaval that the pair won’t be marking their landmark birthdays, as Michael himself admitted last week.

‘This one is a big one, but because we’re in the middle of house moving, our kids are going away and all that, we’re taking a little hiatus. We were starting to plan a big bang and then realised it was just overwhelming and we could do it some other time.’ 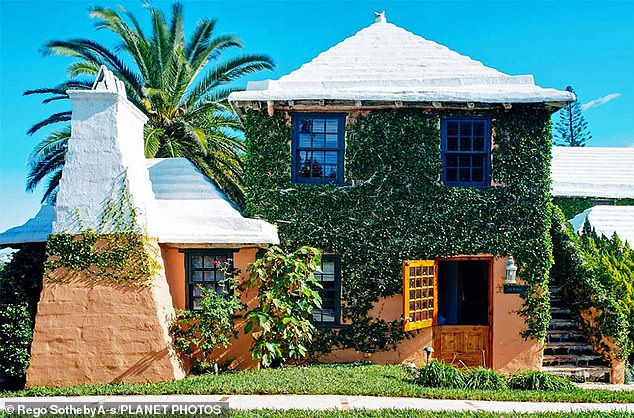 The couple are also seeking to sell off their Bermuda holiday retreat for around £8.5 million

He continued: ‘So we’re going to just be quiet. We have a number of friends who share our same birthday and we’re going to go to one of their parties and hide.’

The new, quieter Douglases will ‘just’ have their beautiful New York apartment overlooking Central Park, their ski cabin in Mont Tremblant, Canada — and, to replace their former £12 million family mansion, a new downsized home in Westchester, New York, purchased this month for a relative song at £3.64 million.

Sitting on 15 acres, it also had stabling for horses and Catherine’s own ‘she shed’, complete with sewing machine and dance barre.

In recent years, Catherine — a passionate amateur interior designer — has enthusiastically Instagrammed pictures of its beautiful gardens and lavish interiors . . . all dark wood and piles of white roses everywhere. There was even a chandelier over the garden’s dining table, so luxe was its decor. Celebrity neighbours included Richard Gere and Ralph Lauren.

Michael and Catherine’s homes under the hammer

THE NEW YORK MANSION: Bought for £9 million in 2014, the palatial house in Westchester, New York State, has been sold for £12 million. Built in 1895 it has eight bedrooms and 18 bathrooms, and is set in 15 acres. Features include a chef’s kitchen, spa with two indoor pools, gym, sauna and steam room.

THE BERMUDA RETREAT: On the market for £8.5 million, this has eight bedrooms plus a guest house, caretaker’s cottage and staff flat. It sits in three acres, which include a herb garden, orchard, swimming pool and tennis court.

THE MALLORCAN PALACE: On sale for £26 million, it was bought by Michael with first wife Diandra in 1990. Many stars, including Jack Nicholson and Tom Cruise, have stayed here. Built in the 1860s, it spans 250 acres and has seven separate buildings. There is a gym, spa, artist’s studio, cinema, wine cellar, library and marble-lined pool. The estate has its own vineyard and pier.

Local real estate agent Angela Kessel confirms an off-market offer was accepted on the house, without it being advertised for sale.

She said: ‘I know that [the Douglases] loved it here. It was not a holiday home, their children went to school here and they were very much a part of the everyday community.

‘I live a few doors down from them and would see Catherine at the nail bar or the hair salon and Michael and Catherine out with the kids.

‘But people do want to downsize or upsize when they enter a new phase in their family life.’

The Mallorcan home is, if anything, even more decadent — stretching over 250 acres and made up of seven separate buildings, it has its own artist’s studio and vineyard. And in Bermuda, with all the usual luxurious holiday essentials, the children have their own quarters with a private kitchen and dining area.

Undoubtedly, these sales are also an example of Michael’s acumen. The three homes for sale cost him a mere £13 million in total, so he stands to make a vast profit.

His fortune is built not only on his success as an actor, but through astute business deals and a canny eye on the bottom line. Michael often asks to keep the suits he wears in films and has said that land, and the views from it, are his idea of luxury.

Professionally, Michael remains very busy, but has had serious health issues, surviving oral cancer, which was detected at stage IV, with a tumour at the base of his tongue, in 2010. After eight weeks of radiation and chemotherapy, he declared he was in remission in January 2011.

However, the joy at his recovery was undoubtedly tempered by the fact Michael later explained that his cancer had been caused by having oral sex. Catherine found the suggestion a humiliating one, and it exacerbated troubles in their marriage.

They met in 1998, when Michael was the bigger star, and married two years later shortly before having their son, Dylan. Catherine won her Oscar for Chicago in 2003, and had daughter Carys not long afterwards. Douglas took a career break, saying he was happy to stay at home and make pancakes with the kids. He said that Catherine was ‘in the prime of her career,’ and something had to give.

In an interview last year, Carys said: ‘I thought my dad was a pancake maker. I didn’t know he was an actor. Honestly.’

The young family put down roots in Bermuda, where Michael has family connections. Catherine had their house totally renovated but apparently found island life boring. When she travelled for work, it inevitably led to separations.

She enjoyed boozy outings with Brad Pitt and George Clooney on the set of 2004 film Ocean’s Twelve, and in 2007 there was a very public flirtation with No Reservations co-star Aaron Eckhart, when the two held hands on the red carpet. Douglas was apparently ‘furious’. One source said they could ‘barely stand being together. Whenever they are in the same room, it usually turns into a blazing row’.

In a later interview, Michael said he and Catherine were no longer sleeping together. Everyone assumed it was a joke.

To add to the challenges, her career hit a downturn, and Michael’s son Cameron — by his first marriage to Diandra — was jailed for drug offences.

Then came Michael’s cancer diagnosis, and what Catherine viewed as a public shaming.

By 2013, she was struggling to find a hit film and checked into hospital suffering from bipolar II disorder, in which serial depressions are followed by manic highs.

Their marriage was rebuilt — with no blockbuster divorce for the lawyers to chew on. Their garguantuan home in Westchester was bought as part of their new beginning.

‘I’m very blessed,’ said Catherine in 2017. ‘I have a husband who listens to me and I’m a wife who listens to him. That’s why — though every marriage goes through ups and downs — we’ve come to a place where we couldn’t be better.’

Michael has quipped about how he and Catherine will enjoy marriage together in the future.

He said: ‘We joke about when I reach my 80s and she’s wheeling me around and I’m saying: “Whoa, where are we going?” And she will say: “Cartier darling, Cartier. It’s your favourite store”.’

Their Manhattan apartment, at least, will never be far from a Cartier boutique.