By Kelsey Wilkie and Eliza Mcphee For Daily Mail Australia

A group of militant vegans have stormed a supermarket and formed a human barricade in front of the store’s meat section as part of a silent protest.

The group wore black and taped their mouths shut as they held signs and flowers at the busy Countdown supermarket in Hamilton, New Zealand, over the weekend.

Footage of the incident shows supermarket staff telling the group they need to leave or the police will be called.

Some shoppers are seen ignoring the protest as they pick up steak and sausages from the meat section, while others take flowers from the activists.

As they slowly marched in unison out of the store they can be heard singing ‘give life a chance’.

The group wore black and taped their mouths shut as they held signs and flowers in the busy Countdown supermarket in Hamilton, New Zealand, over the weekend

‘We are here to peacefully mourn for the victims of the ”meat trade” that lay resting in the chiller department of this supermarket,’ the caption of a Youtube video recorded by the group read.

‘We could not stop them from being born to be slaughtered and eaten so now we are here to pay our respects in the only place that we have access to their dead bodies.

‘We who stand here in mourning know that we do not need to eat the flesh of other beings to survive. We bring with us a song of hope and change for the future that lays ahead.’

A fiery clash erupted when the group flooded a store in Auckland on September 15.

Frustrated shoppers responded to the protest by hurling abuse towards the demonstrators. They branded them ‘disgusting’ before demanding they leave the store. 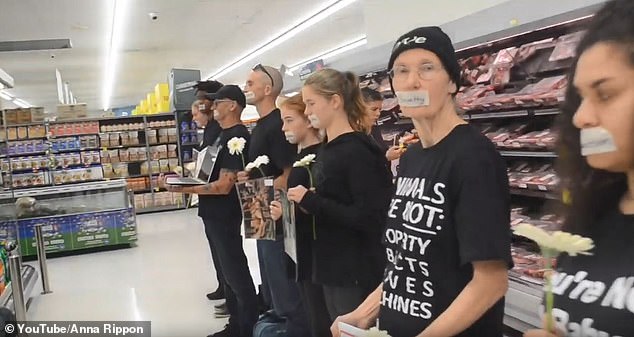 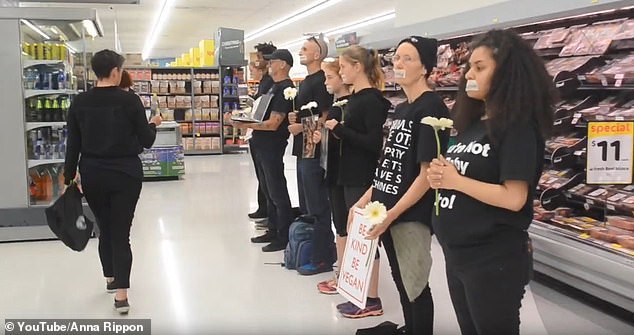 ‘We are here on a peaceful protest for the victims who don’t get seen or heard behind closed doors and are lying dead behind us now,’ Ms Rippon was heard saying in the video.

Ms Rippon admitted she didn’t have permission to be in the store when confronted by one of the supermarket’s employees.

Shoppers refused to be deterred by the stunt and continued to browse the meat aisle.

‘Get out of my face. I’m disgusted you guys are even here in my supermarket when I’m buying my food. You disgust me,’ one shopper said.

Another furious woman lashed out at the vegans after she was filmed by Ms Rippon.

‘Take your camera off me! I’m doing my f***ing shopping!’ she said. 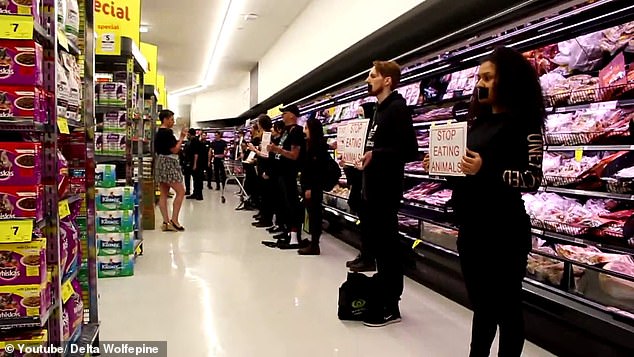 St Luke’s Countdown in Auckland, New Zealand, was bombarded by vegan activists on Sunday sending the grocery store into a frenzy (pictured)

‘I’m doing my shopping lady, unless you’re going to pay for my shopping you can f*** off.’

The group eventually left the supermarket, parading through the rest of the shopping mall’s food court, chanting ‘It’s not food it’s violence’.

One member of the group, Deno Stokes, defended the act saying they weren’t doing anything ‘extreme’.

‘The way those animal parts have been put in the supermarket is far more extreme than what we’re doing,’ Mr Stokes said after the protest.

‘We’re not doing any damage, we’re just standing with the signs and raising awareness.’ 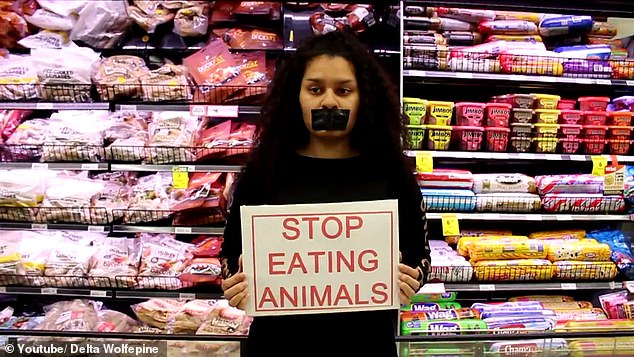 The groups members were dressed in black, with tape covering their mouths as they held up signs saying ‘Stop eating animals’ and ‘It’s not food it’s violence’ (pictured)