The FTSE100 is about to lose one of its biggest companies after BHP revealed shock plans to move Down Under.

In a historic shake-up, the mining giant will scrap its dual British-Australian structure and relocate its main stock market listing from London to Sydney. At the same time, BHP is set to sell its £9bn petroleum business to rival Woodside through an all-shares merger.

The sweeping changes will deal a blow to the City, removing one of the top firms from the blue chip Footsie index at a stroke.

BHP was the most valuable company listed in Britain yesterday, with a market capitalisation of £133.2bn, ahead of Astrazeneca’s £130.6bn. The company will maintain a London listing, but this will only allow trading of the unified Australian business.

And because of the new structure, the shares will not be in FTSE100, dealing a blow to the City. It means the shares will have to be ditched by funds that track the blue chip index. Russ Mould, investment director at AJ Bell, said this could leave many investors ‘dismayed… especially as BHP is currently paying out some very substantial dividends’.

The shake-up came as BHP unveiled a record £7.4bn dividend on the back of its biggest annual profit in almost a decade. The firm said profits surged from £9.8bn to £17.9bn in the year to June 30, driven by soaring iron ore prices. The announcements sent shares in the company soaring by as much as 9pc at one stage yesterday.

The stock later closed up 3.4pc, or 77.5p, at 2358p. BHP’s chairman Ken MacKenzie said the newly-unified BHP would be ‘simpler and more efficient, with greater flexibility’ to mount takeovers or sell assets.

He added: ‘Our plans announced today will better enable BHP to pursue opportunities in new and existing markets and create value and returns over generations.’

BHP can trace its roots back to 1851, when it opened its first tin mine on an Indonesian island. The changes announced yesterday would be the biggest shake-up at the company since it was formed by the merger of UK-based Billiton and Australia’s BHP in 2001.

Since then, the firm has used an unusual dual structure that sees two equal but separately listed companies – based in London and Melbourne respectively – run as a single business under the same board and management. But under the shakeup, the UK company will effectively be subsumed by the Australian one, making it less complicated. 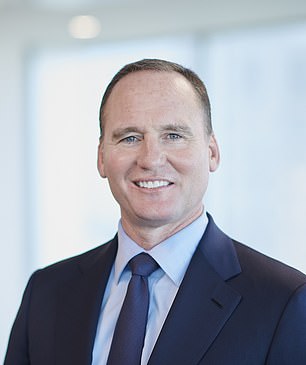 BHP’s move has long been called for by some investors. Wall Street activist Elliott Advisors, which is the company’s fourth-biggest investor with 4.7pc, has previously argued it could unlock £16bn in value. But one fund manager told the Financial Times: ‘It’s a big loss of a well-regarded, global company. Put it this way – I’d rather have BHP in our market than Deliveroo.’

Legal & General Investment Management, BHP’s eighth-biggest shareholder, echoed those concerns, saying it would be disappointed to lose the firm from index tracker funds. Nick Stansbury, LGIM’s head of climate solutions, said: ‘BHP is a unique company, owning a portfolio of the best resources assets in the world, with a track record of being well managed and delivering strong shareholder returns.

‘Today’s announcement is very significant – with the likely outcome that BHP leaves UK indices. If this is indeed the case for UK index investors, it is our view that losing a company of the calibre of BHP is disappointing.

‘However, BHP’s proposal is supported by a robust and clearly articulated value case with the potential for investors in the UK company to benefit from the narrowing of discount to the Australian company.

‘It is important UK index investors are able to realise that benefit and we will continue to review the proposal with this in mind.’

■ BHP announced plans to press ahead with its £4.2bn potash project in Saskatchewan, Canada. This is expected to produce some 4.35m tonnes of potash per year eventually, with mining set to begin in 2027.