Moment cyclist DRAGS a driver across a road n his stomach

A shocking road rage attack which saw an older man being dragged down a street with his exposed stomach grazing against rough asphalt has been caught on camera.

The brutal road rage incident unfolded in Parramatta in Sydney’s west on Tuesday – at 5.50pm during the city’s heavy peak hour traffic.

A woman who witnessed the fight between the men told Daily Mail Australia the bicycle rider, who was not wearing a helmet, sailed through a roundabout before smashing into the older man’s car.

‘It was a massive disruption – people couldn’t get anywhere because the guy in the car wouldn’t move it off the roundabout,’ she said.

‘He was holding on to the other guy’s shirt he didn’t want to let go until the police got there it was like he was trying to make a citizen’s arrest.’

The dramatic scenes took place behind the shopping centre in the western Sydney suburb – and ended with the young cyclist ‘making a run for it’.

‘He had tried to get away three times already which I didn’t know when I was yelling at them to let go of each other,’ the witness said.

The dishevelled older man who wanted police to arrive so they could assess the damage to his car and decide who was in the wrong tried his best to keep the cyclist waiting.

In the shocking footage he can be seen holding tightly onto the bicycle as the cyclist drags it, and him after it, across the ground. 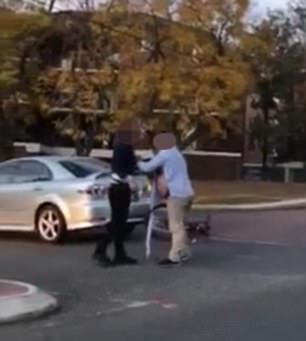 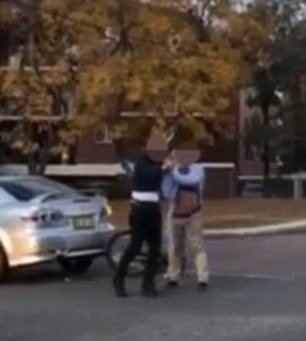 The man’s bare belly is exposed by this time after it was torn earlier in the sensational scuffle.

‘I was scared someone was going to get hurt – it doesn’t take much for someone to hit their head in these situations.’

The young woman’s shocked voice can be heard over the video footage throughout the fight – but it appears most stressed when the cyclist managed his escape. 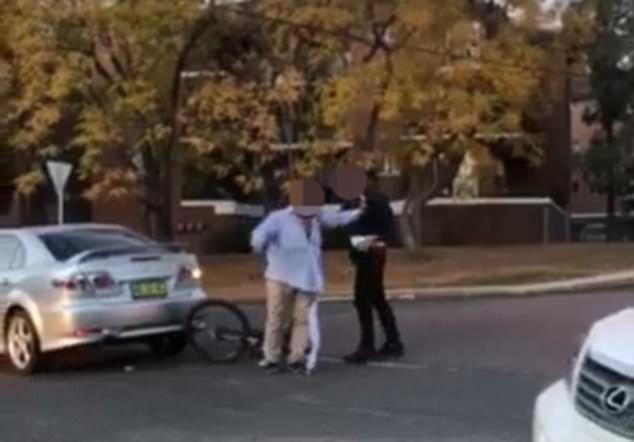 ‘He’s gone,’ she yelled as the older man’s grip failed to keep the bike and its rider at the scene for long enough for police to arrive.

‘I felt really sorry for the bigger bloke, he was really upset and had some damage to his car.

‘I didn’t expect the cyclist to escape but virtually as soon as they had let go of each other he was off.’ 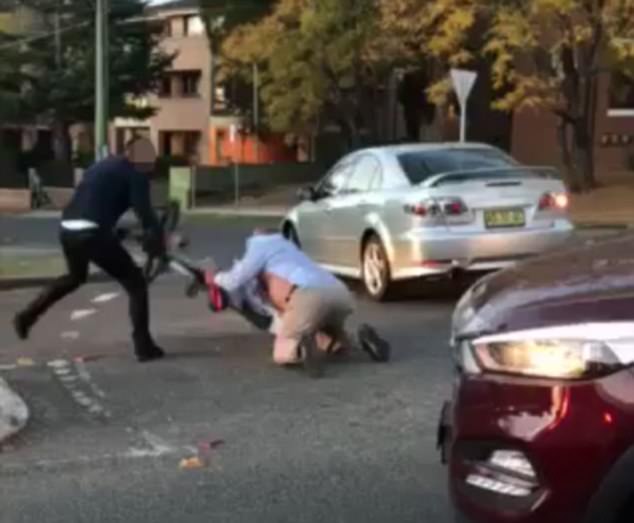