A royal super-fan who sparked a security scare by bursting in front of King Charles III’s Rolls Royce to take a photo was ‘milliseconds’ away from death, according to a special forces veteran.

The drama was captured on a live Sky News broadcast earlier today near the Savoy Circus junction, in East Acton, London.

King Charles was making his way from Westminster Hall to RAF Northholt when his convoy was ambushed by a man, armed with what appeared to be a camera.

The male, wearing a white top and blue trousers, had been chasing the monarch’s car for about 100m when he darted into the road, crossing two lanes of traffic, to snap a picture of the King.

Armed bodyguards, pictured top left, open their doors as an amateur photographed burst into the road, near Savoy Junction, in East Acton, London, to take a photo of King Charles III 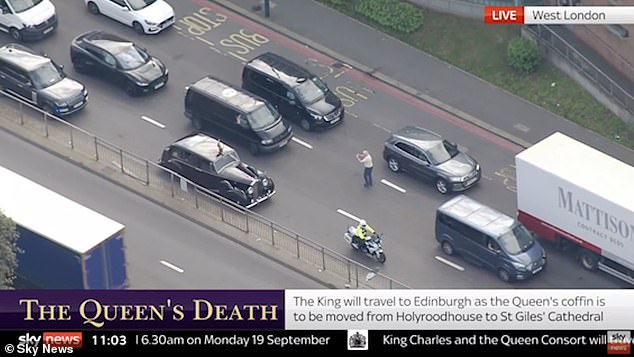 The wannabe photographer was ‘milliseconds from death and could have been shot by the King’s team of close protection officers , according to an SAS veteran 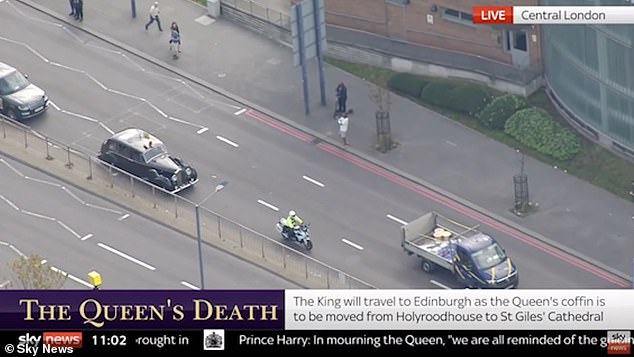 The man, pictured top left, sprinted more than 100m to take a photo of King Charles III as the monarch was driven through the streets of London on his way to Scotland

Close protection officers, travelling behind the King, leapt out of their vehicle to intercept the man, who was ordered away from the monarch’s Rolls Royce.

The royal super-fan’s actions have today been branded ‘crazy’ by a former member of Britain’s elite Special Air Service (SAS).

It comes as Britain’s security services prepares a ring of steel around London ahead of the Queen’s funeral on Monday, with snipers on rooftops and 1,500 soldiers and 10,000 police deployed throughout the capital. 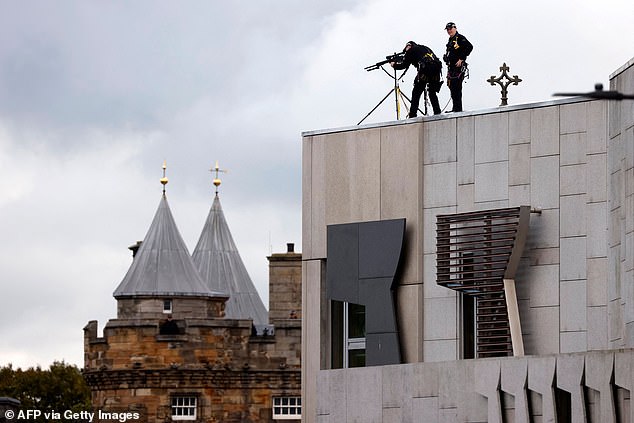 Security services have dropped a ring of steel around London ahead of the Queen’s funeral on Monday, with 10.000 police and 1,500 set to patrol the streets while snipers watch from rooftops

Phil Campion, a retired Staff Sergeant in 22 SAS, said the reckless photographer was ‘milliseconds from death’.

Speaking exclusively to MailOnline Phil, who served as a close protection officer in Afghanistan defending European ambassadors from terrorists, said: ‘This guy is extremely lucky not to have been flat-packed and shot in the head.

‘Close protection officers don’t get a lot of time to work out whether people are a threat or not… He could have been milliseconds away from death. It would have been 50:50 at best whether he lived or died.’ 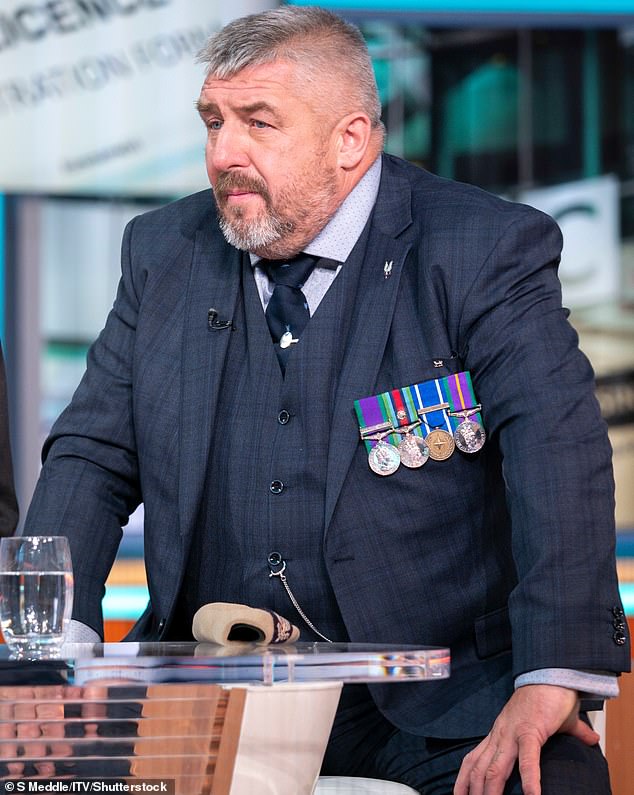 The King’s journey to RAF Northholt continued uninterrupted, where he flew to Edinburgh to be met by hordes of well-wishers, who came to meet him during an unplanned walkabout of the Scottish capital.

Do you know who leapt in front of King Charles’ Rolls Royce in London?

If so, email reporter Tom Cotterill at tom.cotterill@mailonline.co.uk

Today, heavily armed police and security services formed rings of steel outside the Palace of Holyroodhouse and St Giles’ Cathedral – as up to 10,000 officers prepare to be involved in the biggest single security operation the country has ever seen.

Specialist police teams and intelligence officers are understood to have cancelled holiday leave as part of a massive, cross-agency security task for the Queen’s funeral.

Hundreds of foreign dignitaries from across the globe and hundreds of thousands of mourners anticipated in the capital are set to create an unprecedented ‘security headache’.

The operation will ramp up throughout the week as the Queen’s body is flown back to London before she is set to lie in state at the Palace of Westminster.

It is the first time special forces teams including SAS units are expected to be pre-deployed to bases in London on a heightened state of alert in case of any potential attacks. 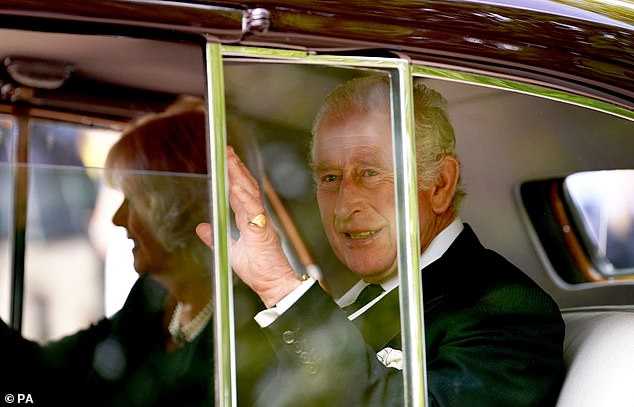 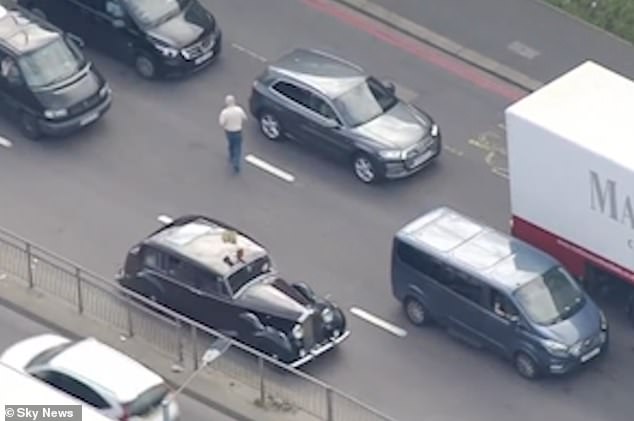 British Transport Police is boosting the number of officers at main railway stations in the run-up to the Queen’s funeral, the force has said.

Assistant Chief Constable Sean O’Callaghan said the public can expect to see ‘a marked increase’ in the number of uniformed officers on patrol on the transport network in London.

He said: ‘We know it’s very important that people are able to travel in the coming days, as many seek to pay their respects and celebrate Her Majesty and her dedication to public service.

‘We expect the rail network to become increasingly busy, especially at main transport hubs in London. People can expect to see a marked increase in highly visible patrols, with more officers on hand to support those travelling and to deter any criminality.

‘This is part of a comprehensive policing plan between BTP, the Metropolitan Police and City of London police.

‘We ask anyone visiting London to remain vigilant and report any concerns.’

In Edinburgh, huge queues of royal fans were seen lining up with flags bearing the Union flag to welcome King Charles as he arrived at St Giles’ Cathedral.

But by midday, Police Scotland officers were preventing any newcomers from joining the swelling crowds that had lined the narrow streets around the 12th-century stone cathedral.

It comes amid tightened security surrounding the monarch, ahead of Queen Elizabeth’s state funeral on Monday, which is expected to see hundreds of thousands of well-wishers packing into London to witness the spectacle.

Charles and Camilla are set to join a procession to St Giles’ Cathedral. 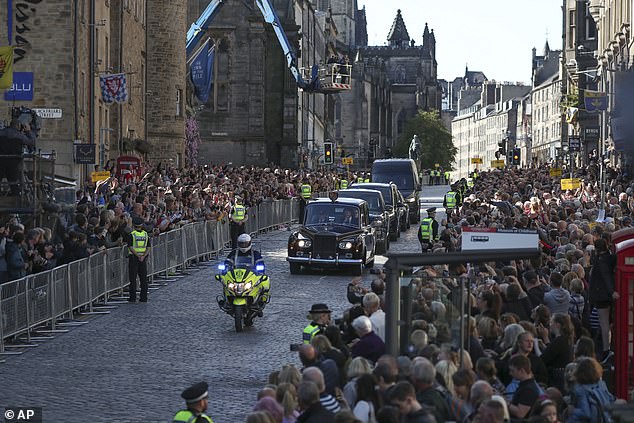 Thousands of people lines the streets of Edinburg to welcome the King to Scotland’s capital city. 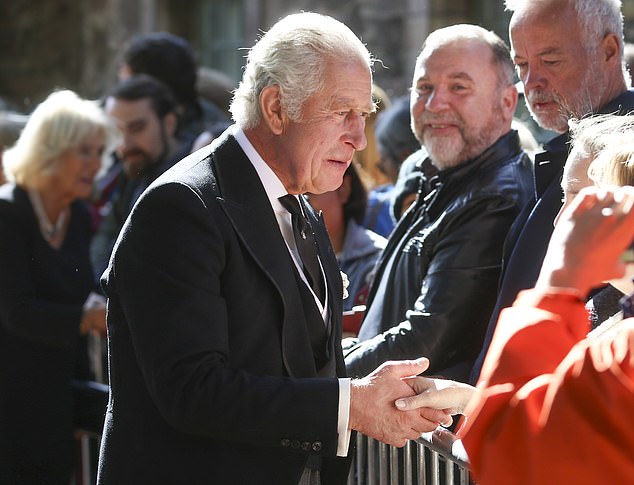 At St Giles’ cathedral the Crown of Scotland will be placed upon the Queen’s coffin. After a service, members of the public will be allowed to file past to pay their respects for 24 hours before Her Majesty is moved to London by plane. 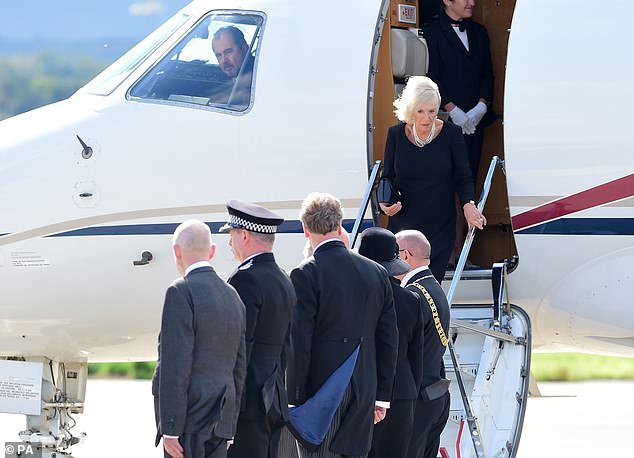 The King and other royals will walk behind the hearse as it makes its way along the Royal Mile. Full details about the royal mourners have yet to be released but Charles will lead some of the royals on foot, expected to be the Duke of York, Earl of Wessex, Princess Royal and her husband Vice Admiral Sir Tim Laurence – while the Queen Consort and other members of the monarchy will follow in cars.

But the new Prince of Wales and his brother the Duke of Sussex will not take part in the procession – amid rumours that they may head to Edinburgh in a show of unity after their walkabout with Kate and Meghan in Windsor on Saturday.

Earlier, the monarch looked close to tears as a rendition of ‘God Save the King’ rang out through the Commons. 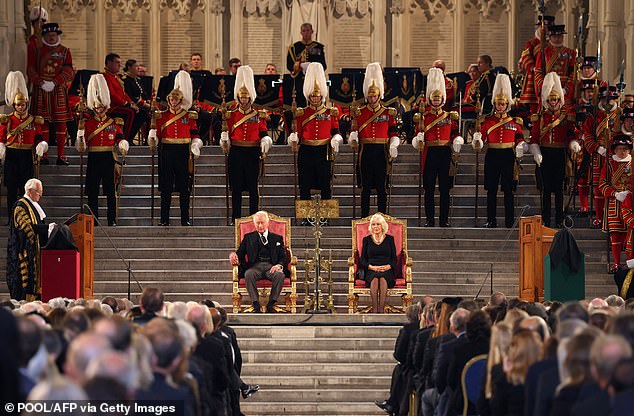 Earlier, King Charles was left close to tears after listening to a rendition of ‘God Save the King’

Speaking to MPs and peers, King Charles said he felt ‘the weight of history’ on his shoulders following their own tributes to his ‘beloved mother’.

In a historic speech where he vowed to follow the Queen’s selfless duty, His Majesty also looked moved as the Lord Speaker and the Commons Speaker expressed their condolences and said: ‘Deep as our grief is, we know yours is deeper.’

In his short, poignant speech, Charles quoted Shakespeare in his tribute to his ‘beloved mother’ as he addressed Parliament for the first time since becoming monarch, saying of the Queen: ‘As Shakespeare said of the earlier Queen Elizabeth, she was a pattern to all princes living.’

The King told MPs and peers assembled in Westminster Hall that he was ‘resolved faithfully to follow’ the example of his mother, the Queen. 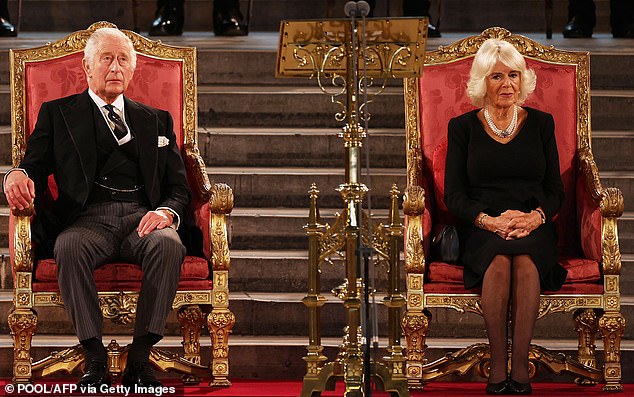 Giving an historic speech in Parliament, King Charles admitted he felt ‘the weight of history’ on his shoulders

He concluded his first formal address to Parliament as King by saying: ‘We gather today in remembrance of the remarkable span of the Queen’s dedicated service to her nations and peoples.

‘While very young, Her late Majesty pledged herself to serve her country and her people and to maintain the precious principles of constitutional government which lie at the heart of our nation.

‘This vow she kept with unsurpassed devotion. She set an example of selfless duty which, with God’s help and your counsels, I am resolved faithfully to follow.’

There were wild cheers and cries of ‘God Save the King’ as the monarch drove from Clarence House down The Mall for the historic moment before MPs and peers bowed and curtseyed as he walked slowly to his throne with Queen Consort, Camilla.

Liz Truss and her predecessor Boris Johnson were also in Westminster Hall this morning along with Labour leader Sir Keir Starmer and hundreds of politicians. 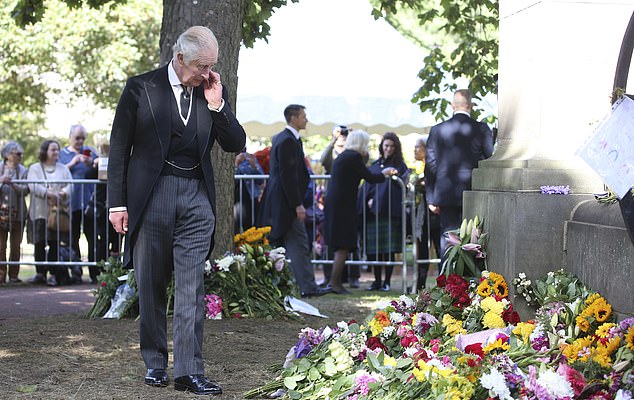 Security remains high around His Majesty, with hundreds of soldiers expected to be drafted into London in the coming days

His Majesty heard tributes for the Queen in the near-1,000-year-old Westminster Hall – the ancient heart of the Palace of Westminster where his mother will lie in state from Wednesday evening for four days until her funeral next Monday. At times Charles looked deeply moved.

The Lord Speaker and the Commons Speaker expressed their condolences to His Majesty in a ceremony in Westminster Hall. Charles received a motion of confidence from both houses of Parliament – in another constitutional event that has never been seen on TV before.

The Lord Speaker Lord McFall of Alcluith said people will continue to draw strength from the Queen’s “shining example”.

Do you know who the man was who tried to take a photo of King Charles’ car? If so, email tom.cotterill@mailonline.co.uk 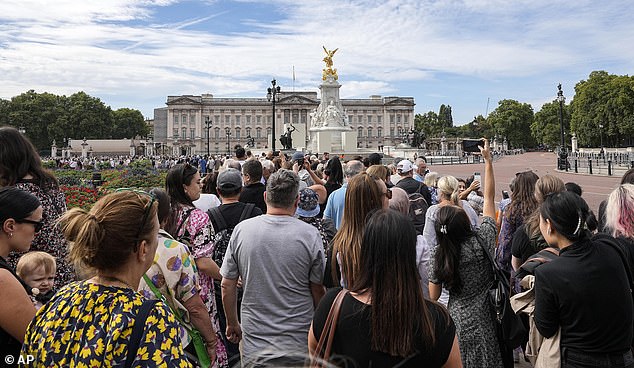 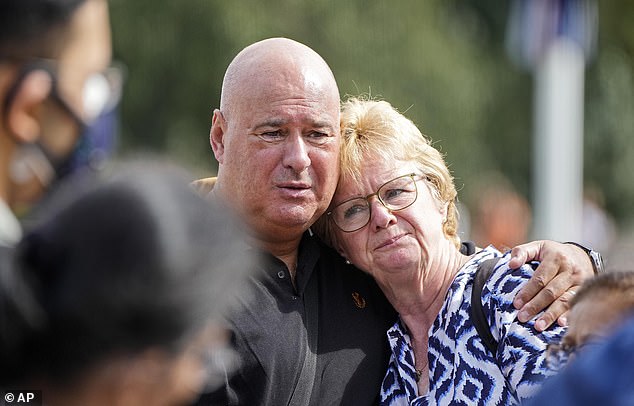