From a lightning strike at the Acropolis to UFO-like clouds hanging over jagged peaks: More stunning entries to the 2019 National Geographic Travel Photo Contest

The jaw-dropping entries for the 2019 National Geographic Travel Photo Contest keep on coming.

Here we present 10 more that have impressed the judges – and it’s clear they’ve got their work cut out.

There’s a stunning snap of UFO-like clouds hovering over jagged peaks in the Dolomites, an electrifying image of a lightning strike behind the Acropolis in Greece and a mesmerising picture of the Taj Mahal silhouetted at sunrise.

This sneak peek also includes a superb aerial shot of Manhattan and an osprey captured speeding through the air with a freshly caught fish.

Both budding and established photographers are encouraged to enter the competition, which is split into three categories: nature, cities and people.

The competition opened on March 18 and National Geographic will be accepting submissions until May 31. You can read more about the competition and enter by clicking here. 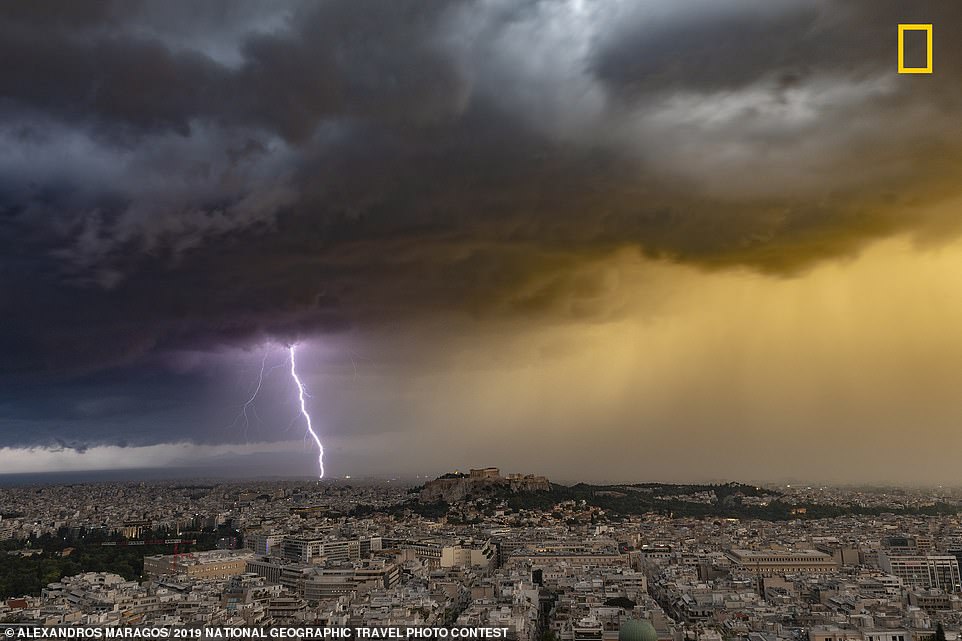 Lightning strikes the shoreline of the Attica peninsula behind the Acropolis of Athens, Greece, during a severe summer thunderstorm on June 23, 2018 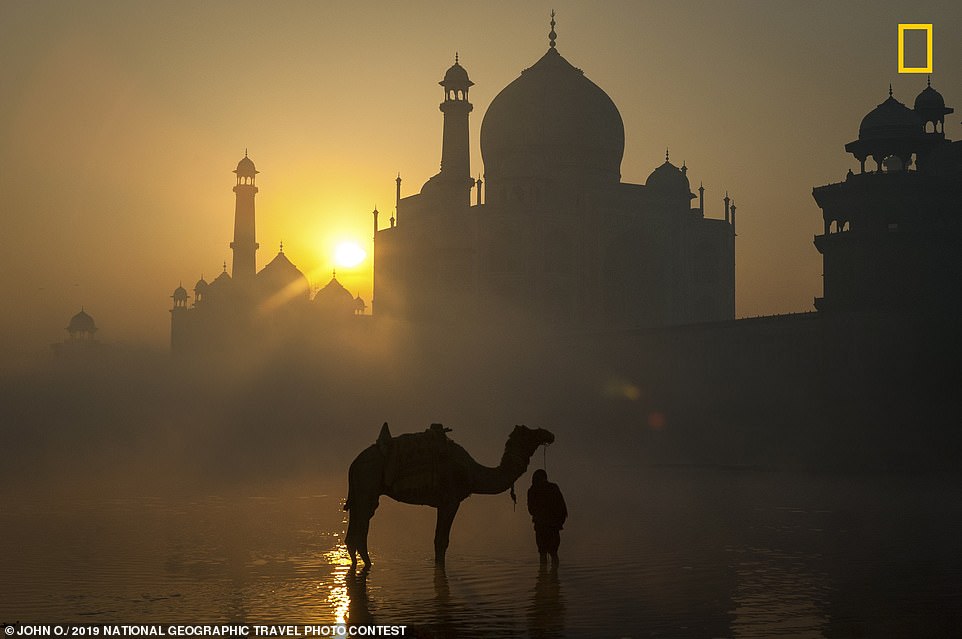 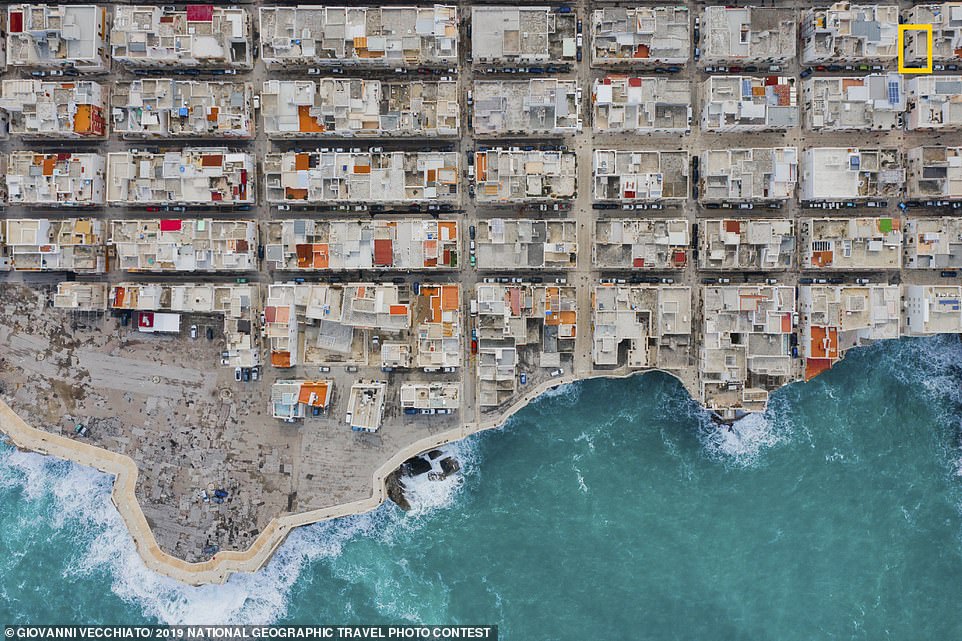 Photographer Giovanni Vecchiato said of his photo: ‘I like the order of the blocks compared with the disorder of the coast and rough sea.’ The location of the picture remains a mystery, however 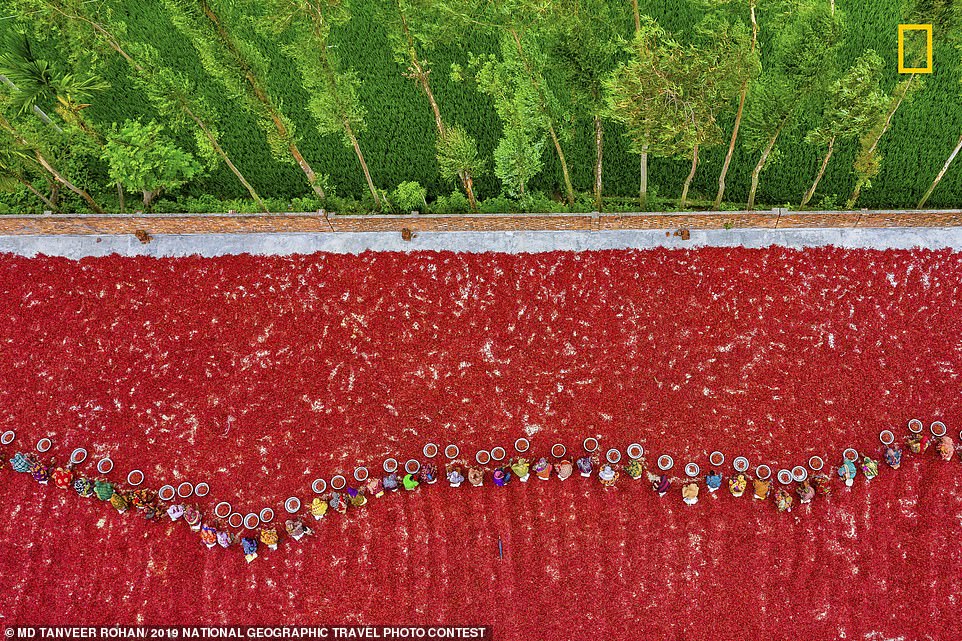 Bangladeshi women dry red chilli pepper under the sun to preserve them in Bogra, Bangladesh. They get nearly $2 ( £1.53) after 10 hours of work and in some places they get less than this amount 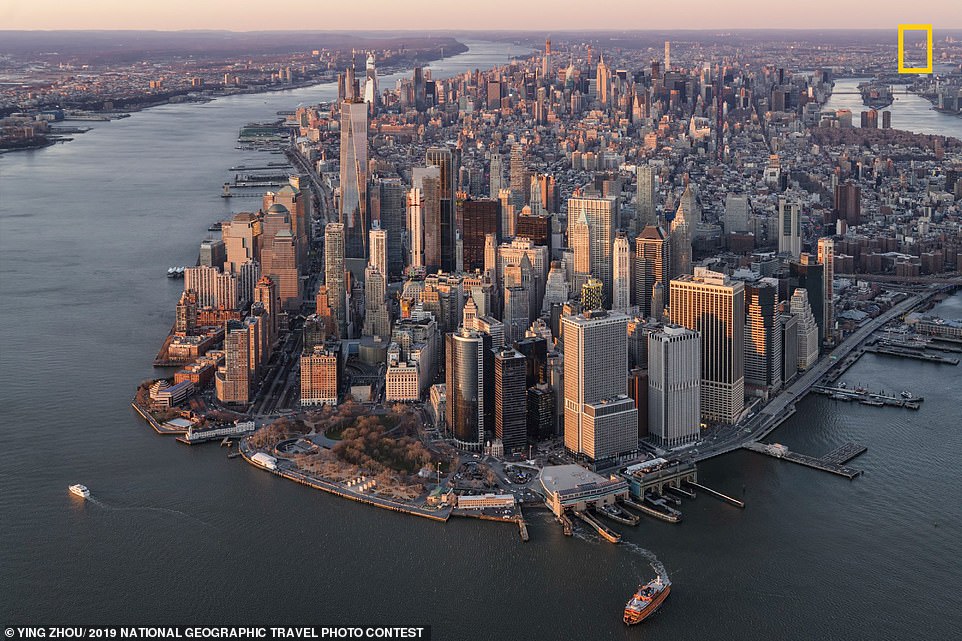 ‘The good thing about aerial photography is that it gives you the chance to really see the “shape” of the city,’ says snapper Ying Zhou, who added that despite being familiar with the shape of Manhattan, there was still excitement at seeing it with the naked eye for the first time 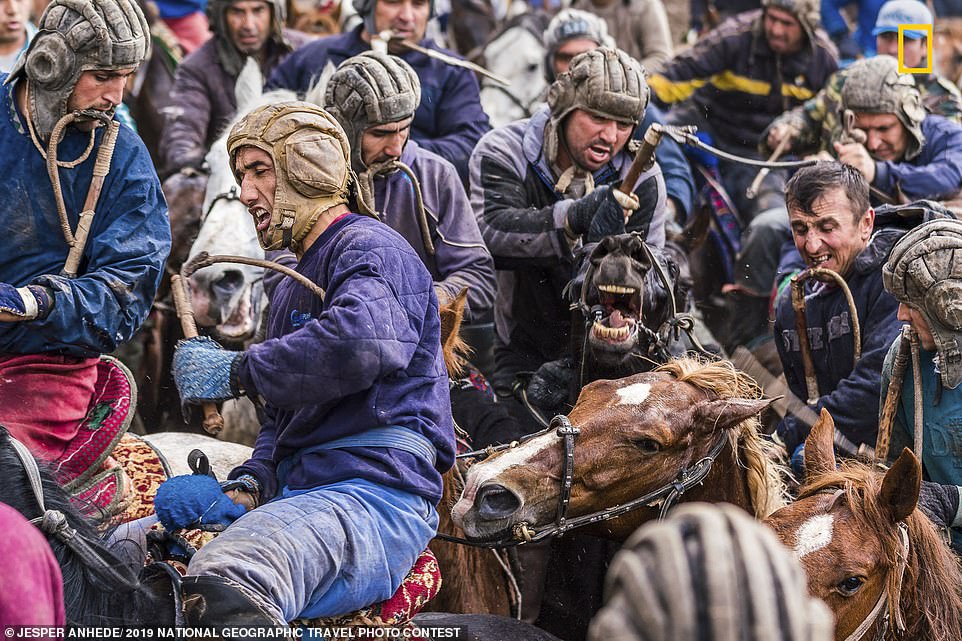 Buzkashi is a Central Asian sport in which horse-mounted players attempt to place a goat, calf or a lamb carcass in a goal. It’s been played in one form or another for more than 600 years. This picture by Jesper Anhede captures the energy of it 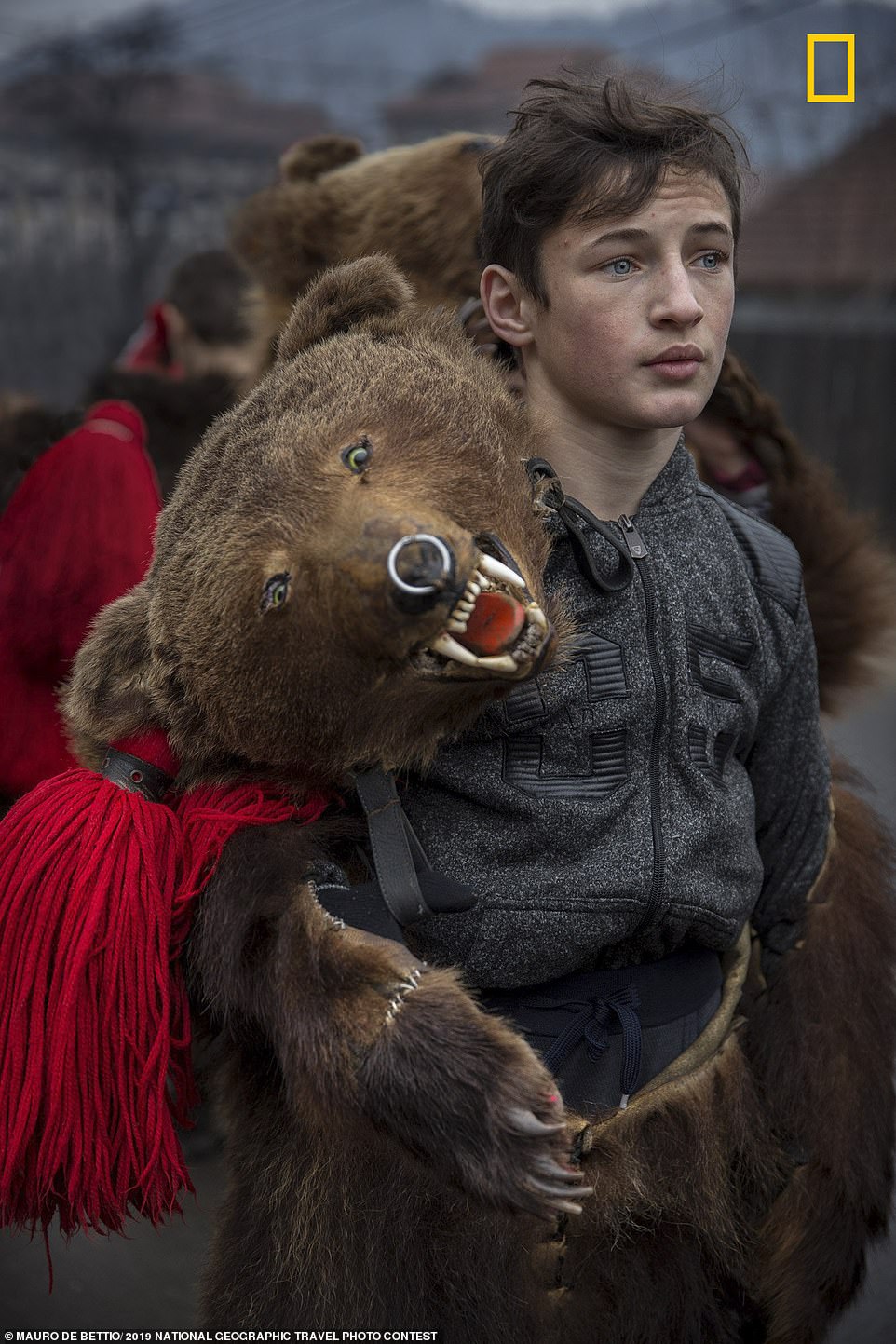 Every winter, between Christmas and New Year, in the north-eastern regions of Romania, the annual Dance of the Bears takes place – a ritual that symbolizes the death and rebirth of time. Men and women of all ages dress with bear skins and dance to the rhythm of flutes and percussion to drive away evil spirits and welcome the new year 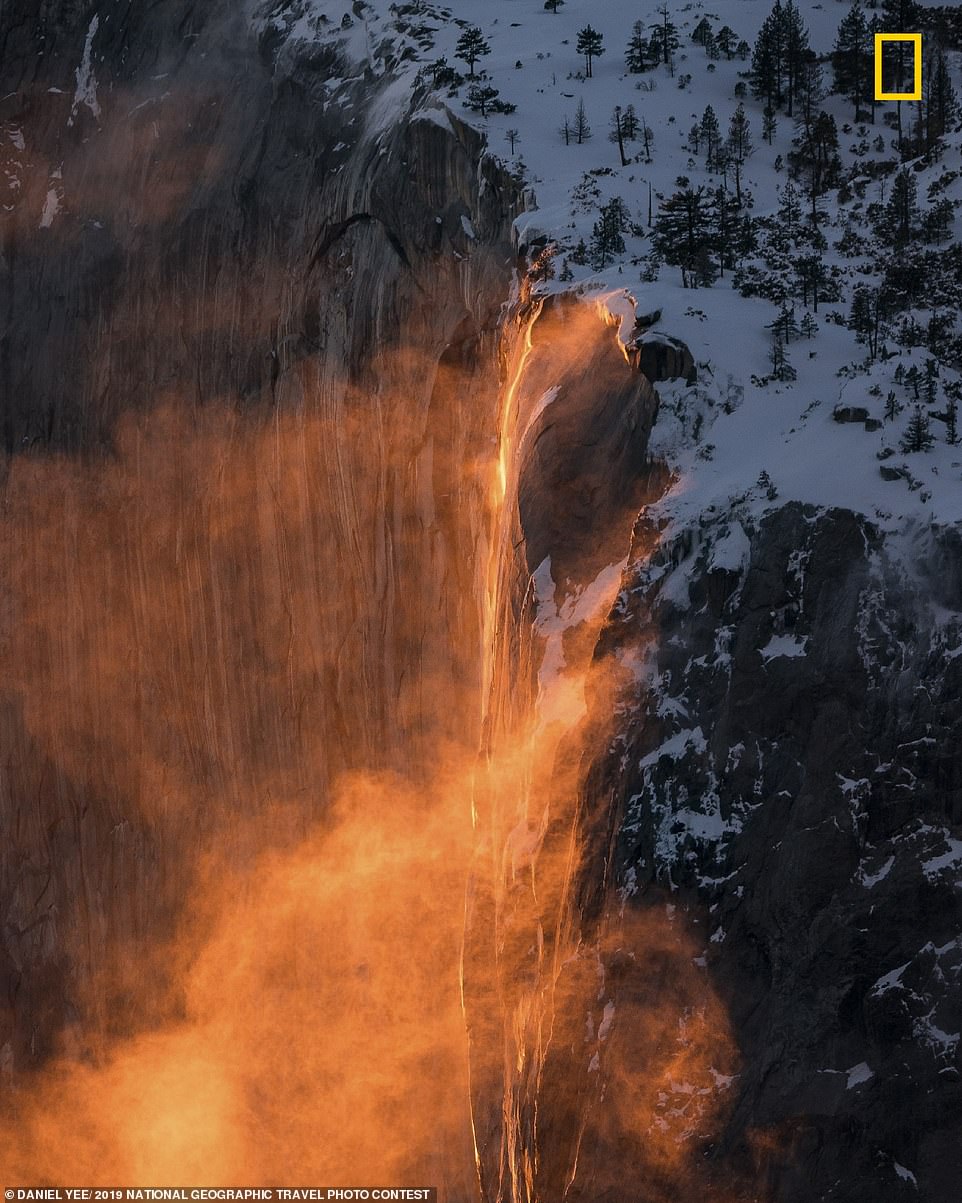 Photographer Daniel Yee said: ‘The famous Firefall of Yosemite National Park is a natural phenomenon that occurs when the Horsetail Falls waterfall glows orange due to the angle of sunlight hitting the water. It will only occur when certain time and weather conditions are met. Some firefalls may glow a pale yellow, while others may glow like burning fire. I was lucky to witness the latter combined with strong winds, creating a spectacular sight to see. I went the extra mile up a snowy mountain to get the eye-level shot’ 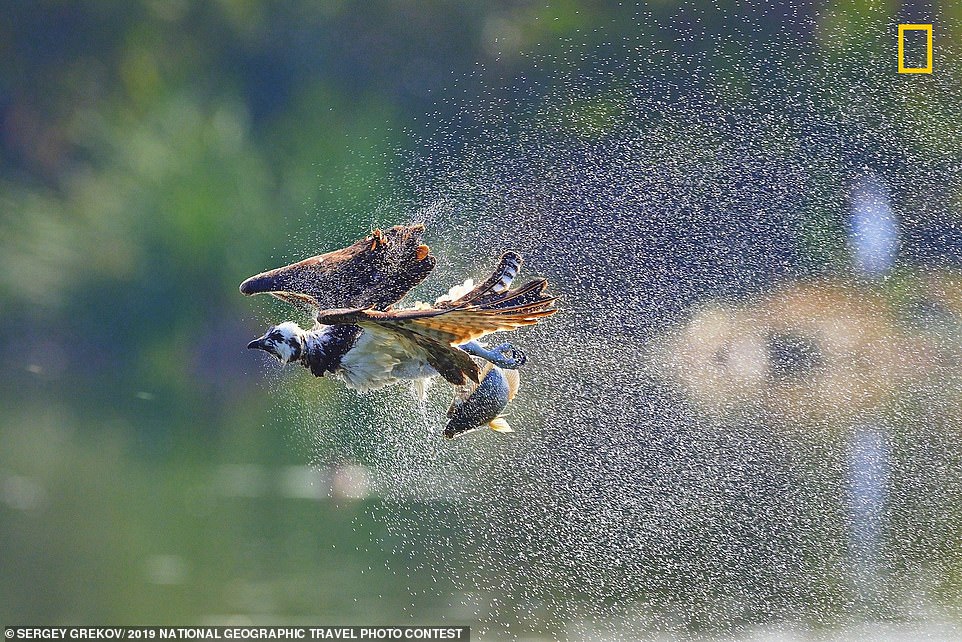 This osprey, shaking off water after a successful dive, was photographed next to a very busy 405 freeway in the heart of San Fernando Valley – an urban-suburban enclave of Greater Los Angeles. Photographer Sergey Grekov said: ‘Harsh sun in the zenith made the shot very difficult but revealed a beautiful cloud of water drops, following the bird, reminding me of famous jet sonic boom images’