Mortgage overpayment app Sprive: Is it any good?

A new app says it will make it easier for people to make regular overpayments on their mortgage, potentially saving them thousands in interest and making them mortgage-free faster.

Sprive was founded by former Goldman Sachs banker Jinesh Vohra, who was inspired by the struggles he had when trying to overpay on his own mortgage.

He said he found the process confusing, and spent hours calculating how much he was reducing his total balance by each time he overpaid and what he was saving himself in interest costs.

‘It made sense to make overpayments, especially as I wouldn’t be earning much interest on any money I saved if I put it in a bank account with interest rates so low.

‘But six months in, I realised the overpayments weren’t having the benefit I expected. Instead of reducing my overall debt, the payments were being used to reduce my monthly payments – keeping the mortgage term and the interest owed the same.’

Sprive claims to demystify this process, by calculating the overpayments a user can afford each month and paying them to their bank.

If their bank has a minimum threshold for overpayments, Sprive can put funds in a holding account until this figure is reached and the payment can be made.

The app also provides them with a running total of the percentage of their home that they own, their total debt amount and the timescale in which they can hope to pay it off.

As they keep overpaying, they will see both of these figures reduce over time – meaning they could be mortgage-free more quickly.

Sprive has given the following example of how the app might work: 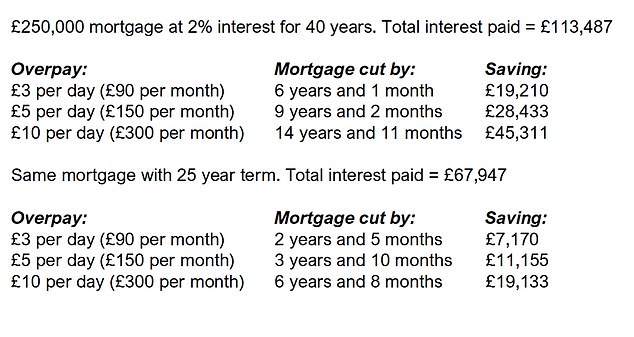 Of interest? Homeowners can cut their interest payments by overpaying their mortgage

The app works in a similar way to money-saving apps such as Moneybox and Plum, which monitor the user’s spending and put away a certain amount each month based on what they can afford.

But instead of squirrelling the money away for a rainy day, Sprive will divert it to make overpayments on the user’s mortgage.

To do this, customers will need to link their bank account to the app and agree to share their spending data, as well as details of their mortgage account. Sprive is currently free to use.

Customers can choose a minimum and maximum limit each month, and the app will use artificial intelligence technology to determine how much to pay. This amount can be adjusted if the user wants.

It says that it ‘never stores or has access to bank login details.’ 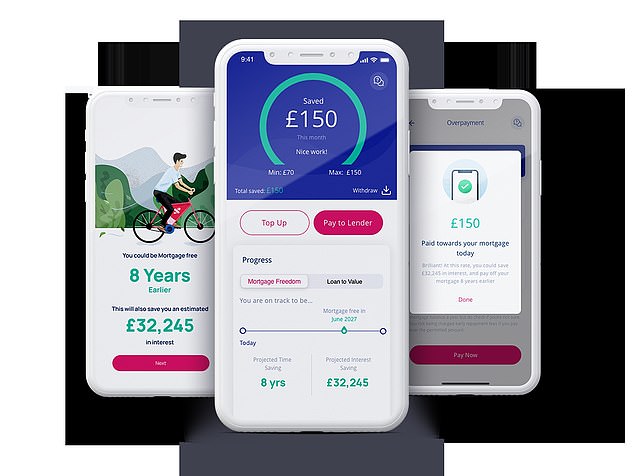 The Sprive app gives users the facility to see how long they have to pay off their mortgage, as well as how much interest they could potentially save by paying early

‘The algorithm looks at the individual’s spending,’ Vohra explains. ‘If they have splashed out that month it will take something close to the minimum amount, but if they have been sensible and saved more it will take the maximum.’

While users can elect for the money to leave their account automatically, the default setting is for them to manually approve the payment first.

It is the first app of its kind that is independent, rather than being provided by a mortgage lender.

While it is regulated by the FCA, Vohra says it is not providing financial advice – rather, it is giving borrowers the tools to better understand their mortgage and make informed decisions on whether to overpay. 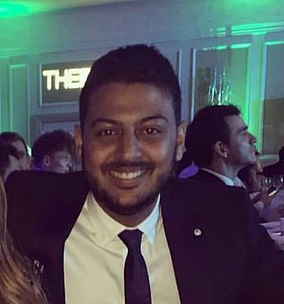 Indi Rai, 34, a marketing executive from Bedfordshire, has been using the pilot version of the Sprive app to make mortgage overpayments on the home he shares with his wife for almost a year, after hearing about it on social media.

He says: ‘I had thought about making mortgage overpayments for some time, but it was always difficult to get information from my bank about how I could do it.

‘I just never got around to picking up the phone and talking to someone.

‘The Sprive app was very easy to set up, and I like that my payments go in to my mortgage account instantly, so there is no waiting around for it to go through.

‘Before using Sprive I found it hard to work out the effect any overpayments would have when it came to cutting down my mortgage term – but now it is easy to see exactly how much time I can knock off.

‘I think I will have paid off my mortgage in about 12 years, rather than the 20-30 that I expected when I took it out.’

Users will need to be clear about any restrictions on how much they can overpay, however.

While those on their lender’s standard variable rate can normally overpay without penalty, people on fixed-rate or tracker deals may be subject to annual limits set by their bank or building society.

This is commonly around 10 per cent of the mortgage balance on a fixed product. Some trackers often have a 25 per cent limit, but others allow penalty-free repayments.

Is overpaying your mortgage right for you?

While the temptation may be to overpay the home loan in order to try and become ‘mortgage-free’ as early as possible, there are likely to be a number of other financial considerations at play.

For example, debts elsewhere – if you have them, could money you potentially divert into overpaying your mortgage be better served there?

Do you have an emergency savings buffer? Could it make more sense to boost the amount you pay into a private pension? Or invest?

It all depends on your individual circumstances and is not always completely clear cut.

They will also want to be aware of their lender’s early repayment charges, which penalise homeowners for paying off their loan before the end of the term.

It is only worth paying these if you will save more than the amount of the charge in interest by paying off early.

Homeowners should also consider the impact of inflation on their future mortgage amount, and whether they will be saving money in the long run.

As Katie Brain, mortgage expert at independent financial advice service Defaqto, explains: ‘It is worth considering whether or not it is worth overpaying your mortgage at this time.

‘You have to think whether the additional cost you pay now, in today’s money, is worth it for saving an amount in the future which will be considerably less in real terms.

‘Mind you, not having a mortgage – even if it’s a very small one – is a very big comfort to people and it may be worth it for peace of mind.’

While it does not plan to charge its customers to use the app, Sprive hopes to make money in future by recommending them cheaper mortgage deals and taking a commission from lenders when they switch – similar to a traditional mortgage broker.

‘Eventually, we want to create a tool where we scan the market 24/7 for better mortgage deals and help users switch, like a Uswitch for mortgages,’ Vohra explains.

This is Money asked Katie whether overpaying a mortgage using an app like Sprive is a good idea, and what users need to look out for.

‘This new overpayment app sounds like a great idea as you can link your bank account to it and help pay your mortgage off quicker, she said.

‘However, there are a few things to bear in mind.’

She offered the following tips for overpaying using Sprive: