Mortgage rates: They begin to nudge up over potential base rate move

The typical cost of a mortgage has gone up for the first time since June, as lenders price in a possible base rate rise.

Those with big deposits have been hit hardest, seeing increases of nearly 0.4 per cent in the month to 1 November – just head of base rate sticking at 0.1 per cent for another month.

The average fixed rate increased on all mortgages with deposits of more than 25 per cent, according to financial analysts at Moneyfacts.

While rates have hit all-time lows of as little as 0.84 per cent in recent months, lenders are now driving them upwards in response to rising inflation.

The biggest shifts were recorded on mortgages with 35 per cent deposits, where the two-year fixed average went up by 0.39 per cent in a month to reach 2.50 per cent – the highest average recorded since 2013.

Over a 25-year mortgage term, however, the borrower would pay £11,600 more in interest, assuming they stayed on the same rate.

The snapshot was taken in the days following a report on 27 October by the Office for Budget Responsibility, published alongside the Budget, which predicted a ‘worst case’ rise in the Bank of England’s base rate of 3.5 per cent in 2023.

The base rate is currently at 0.1 per cent, but if it increases then banks will likely drive up their mortgage rates to a similar degree.

Lenders have already been edging up their rates in anticipation of a potential base rate rise, as it has been predicted that the Bank could start to increase it, perhaps even before the end of this year.

Its Monetary Policy Committee met last week to discuss an increase, but decided that the rate will stick at 0.1 per cent for now. The next meeting is slated for 16 December.

With so much uncertainty around interest rates, industry experts have urged borrowers to consider fixing a new mortgage deal now, if they are in a position to, in order to shield themselves against any big increases in their monthly payments.

Eleanor Williams, finance expert at Moneyfacts, said: ‘Recent competition in the mortgage sector saw the launch of record-low initial rates as providers competed for predominantly low risk business from borrowers with higher deposits or levels of equity and which saw average rates reduce.

‘However, the start of November marks a reverse in the average rate cut trend; while still lower than their year-on-year equivalents, the overall average two- and five-year fixed rates have increased for the first time since June, with both rates rising by 0.04 per cent.

‘As the market remains unsettled, borrowers may consider this an opportune time to explore securing a new deal, as there is no guarantee that rates will not continue to increase in the months to come.

‘Seeking out independent financial advice to assess the changing market is vital to ensure the best possible deal can be secured considering the rate, associated fees and incentives.’

How does it affect my mortgage?

Here is our quick guide to what to consider, depending on the status of your current mortgage. You can check live mortgage rates to see the best deals for you using the This is Money mortgage service.

Nearing the end of a fix

Borrowers nearing the end of a fixed deal could look at locking in to a lower rate now. Many mortgage lenders will allow borrowers to hold new fixed rate deals three or even six months ahead.

Anyone on their lender’s standard variable rate, many of which are at 4 per cent or higher, should look at switching their mortgage, as they have the greatest opportunity to save.

Those within fixed rate deals

Those in the middle of a fixed term will almost certainly need to pay an early repayment charge if they switch, which can be up to 5 per cent of the total mortgage balance, so switching is unlikely to make sense. However, it could still be worth calculating the cost, as some lenders taper down the ERC for each year of the fixed term that elapses.

Borrowers should watch out for expensive fees associated with super low rate mortgages, as it is often cheaper to take a higher rate with a lower, or no, fee.

You can compare the true cost of different deals using our mortgage calculator.

Although rates are on the rise for those with big deposits, they remain lower than they were before the pandemic in some cases.

This means borrowers coming off two-year fixed deals and looking to remortgage today could still find a better deal than their existing one – though perhaps not for long.

Those who fixed for five years in 2016, when rates were slightly higher still, could also find a better deal. 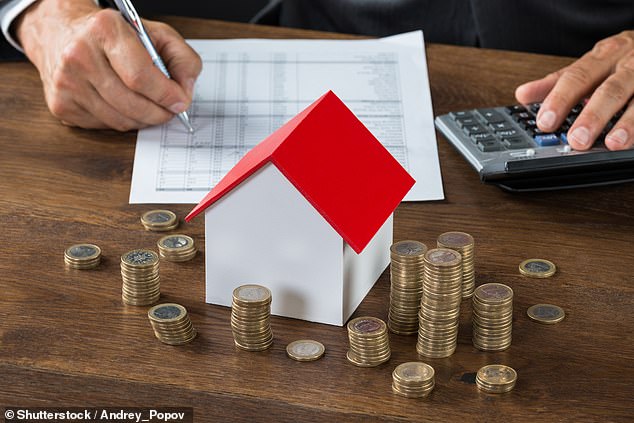 Remortgagors coming to the end of fixed deals could still save on their monthly bill, although if rates continue their upward trend, they may end up paying more

Rates also continue to fall for first-time buyers, for whom the cost of a mortgage remained stubbornly high for months after products were removed from the market due to risk concerns in the early days of the pandemic.

In the last month alone, both two and five-year fixes on 5 per cent products have fallen by more than 0.10 per cent.

Williams added: ‘Borrowers with smaller deposits or amounts of equity who may have spent much of the past 18 months with few options available to them have seen continued improvements in the level of choice on offer this month, with the number of products on offer with deposits of 10 per cent deposits or less at its highest level since March 2020.’