Mother, 39, discovers she has an incurable brain tumour

A mother suffering from severe headaches claims she was told by a hospital she had a migraine and was sent home with paracetamol.

Isabel Morison, 39, received the devastating news she had an incurable brain tumour just one day later, after returning because of the severe pain.

The music teacher, from Merseyside, originally put her headaches down to cervical spondylosis, which affects the joints and discs in the cervical spine.

In December 2017, Mrs Morison started to feel a tingling sensation in her hands which eventually moved to her neck and spine.

This was followed by a series of headaches which she described as a ‘sudden bolt in the head’.

Mrs Morison, who teaches in Crosby, had always been fit and healthy and had even competed in the London and New York marathons.

Then one day the pain was so bad she and her mother-in-law went to Southport Hospital where Mrs Morison claims she was told it was a migraine and was sent home with paracetamol.

But, the following day the pain was still there and she had to phone an ambulance.

Mrs Morison was taken back to Southport Hospital where she was immediately admitted and over the next few days underwent a series of investigations including CT, MRI scans and a lumbar puncture.

She was then referred to the Walton Neurology centre, where they confirmed it was most likely to be a primary tumour and scheduled an operation to remove it.

They explained they would make an incision on the right side of her head and replace the bone with metal plates. 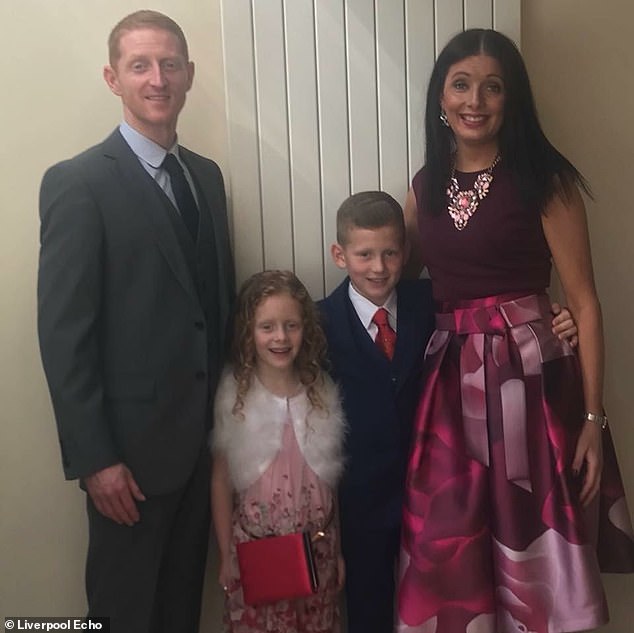 Before the diagnosis: Mrs Morison originally put her headaches down to cervical spondylosis, a common, age-related condition that affects the joints and discs in the cervical spine

One week later, on March 7 – her husband Stuart’s birthday, Mrs Morison had brain surgery. The surgeon managed to remove most, but not all the tumour.

She was later dealt the devastating news that it was an aggressive glioblastoma.

Mrs Morison was offered the chance to try a new pioneering treatment, Optune, which is not currently available on the NHS, in conjunction with the treatment she was already receiving.

Optune, is a non-invasive technique which uses electric fields, delivered via a set of adhesive patches worn like a skull cap.

The treatment helps to prevent the tumour from growing or spreading quickly and the cap has to be worn between 17-24 hours daily and applied to a completely shaved head.

A couple of days before it was scheduled to begin, Mrs Morison bravely arranged for her long dark hair to be shaved in preparation for the treatment.

She donated her hair to the Little Princess Trust, a charity for children who suffer hair loss from cancer or other illnesses.

Mrs Morison said: ‘Whilst Optune does not remove the cancerous cells, it prevents a tumour from growing or spreading quickly.’

Yet, Mrs Morison remains upbeat and is intent on being a good mother to her son Dylan, nine, and daughter Lucy, six. 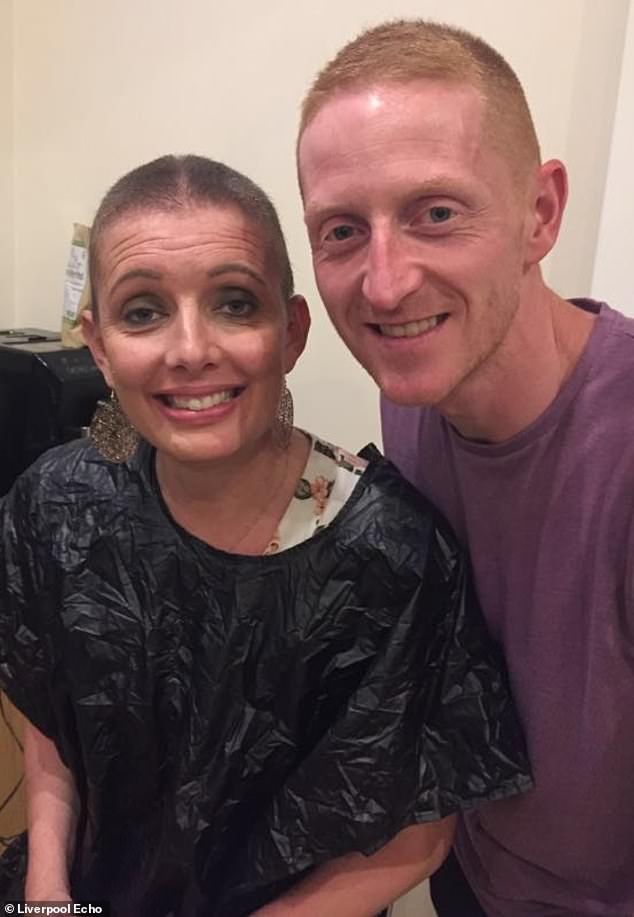 Help: Mrs Morison was offered the chance to try a new pioneering treatment, Optune, not currently available on the NHS, in conjunction with the treatment she was already receiving

She said: ‘I’ve got two little kids, they become scared if I am scared, so I put on a brave face.

‘Despite being sent home originally from hospital without a scan, the treatment elsewhere in Walton and Clatterbridge has been outstanding.

‘My surgeon said headaches are common, brain tumours are rare, but don’t rely on Google to diagnose yourself, insist on a further investigation.’

Now, Mrs Morison is looking into immunotherapy, but the treatment is not available on the NHS and costs over £200,000.

Mrs Morison, who wants to raise awareness of the symptoms of brain tumours, added: ‘I take every day as it comes and every month as it comes.’

Her school is helping the fundraising and has been backed by ex-Liverpool player Jamie Carragher.

WHAT IS A GLIOBLASTOMA AND JUST HOW DEADLY IS IT? THE AGGRESSIVE BRAIN TUMOR SUFFERED BY JOHN MCCAIN

Senator John McCain was diagnosed with a glioblastoma in July 2017

Glioblastoma is considered the most aggressive tumor that can form in the brain. Senator John McCain was diagnosed with one in July 2017.

Patients have a 10 percent chance of surviving five years after their diagnosis, according to figures. The average lifespan is between 14 and 16 months.

Three adults per every 100,000 will be struck down with a glioblastoma, says The American Association of Neurological Surgeons (AANS).

It is most commonly found in men aged 50 to 60, and there is no link between developing glioblastoma and having a previous history with other cancers.

WHAT IS THE TUMOR MADE OF?

The tumor is made up of a mass of cells growing quickly in the brain, and in most cases patients have no family history of the disease.

It won’t spread to other organs, however, once it is diagnosed, it is nearly impossible to target, surgeons claim.

WHAT TREATMENT IS AVAILABLE?

Because the tumor likely already spread deep into the brain by the time it is diagnosed, the cancerous tissue is incredibly difficult to remove.

Surgeon will only ever remove the tumor, or part of the tumor, if it won’t do any damage to the surrounding brain tissue.

Dr Babcar Cisse, a neurosurgeon at the Weill Cornell Brain and Spine Center, told Daily Mail Online in July 2017: ‘By the time a glioblastoma is diagnosed, microfibers can spread to the rest of the brain which an MRI would not spot.

‘So even if the main tumor is removed and the patient receives radiation and chemotherapy, it will come back.’

Brain tumors are graded from between one to four, depending on how fast they grow and how aggressive they are.

Malignant tumors are either given a high-grade three or four, while benign ones are given a lower grade one or two.

Glioblastoma is often referred to as a grade four astrocytoma – another form of brain tumor, says the AANS.

Patients typically complain of symptoms such as confused vision, trouble with memory, dizziness and headaches.

The symptoms are somewhat nonspecific, and vary from person to person, and may not persist.

The disease is therefore impossible to diagnose based on symptoms alone.