Like any mother-to-be, Hollie Ismaili was ecstatic when she found out she was expecting her first baby.

But before she could share the exciting news with anyone, the pregnancy was over.

The now 36-year-old, from Melbourne, had tragically suffered a ‘missed miscarriage’, also known as a silent miscarriage, where the foetus dies but the body doesn’t recognise the pregnancy loss.

Despite no bleeding or cramping, Hollie was still experiencing the expected symptoms of pregnancy, including nausea, bloating and sore breasts.

Hollie Ismaili (pictured) tragically suffered a ‘missed miscarriage’, also known as a silent miscarriage, where the foetus dies but the body doesn’t recognise the pregnancy loss 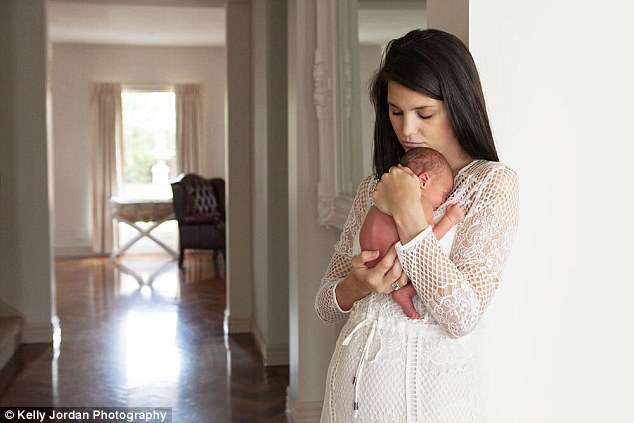 ‘I was shocked and had no idea that such a thing could even happen. I was always led to believe a miscarriage meant you bleed and your body miscarries of its own accord but there were no signs to indicate there could be something amiss.’

Despite losing her baby at around eight weeks, Hollie explained how she tried to downplay her grief at the time.

‘I didn’t feel like I had the right to grieve and I felt like I just wanted to move on and get past this and go back to feeling normal,’ she said.

‘I knew of no one else who had gone through this but I knew of couples who had stillborn babies and I considered myself lucky to not be in that situation. It could have been worse and I just needed to get back on my feet and dust myself off.’ 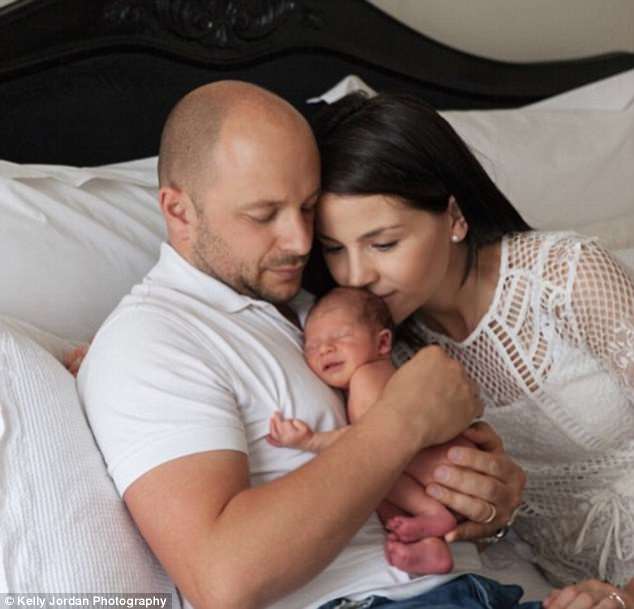 ‘We were in awe of this tiny miracle who had made us proud parents’: The young couple welcomed their baby son three years ago 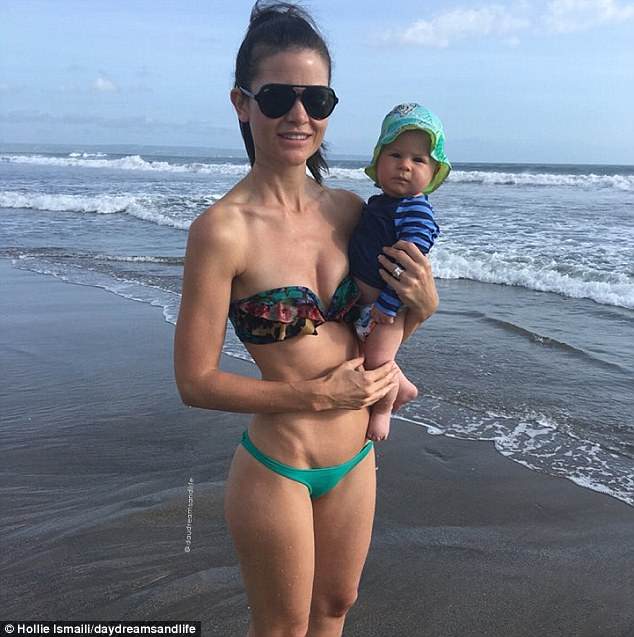 Three weeks after discovering her foetus didn’t have a heartbeat, her body continued to send signals she was pregnant (pictured with her now toddler son Zac)

Three weeks after discovering her foetus didn’t have a heartbeat, her body continued to send signals she was pregnant.

‘When my body didn’t miscarry naturally, I was stressed and my body was still showing all the pregnancy symptoms, so I went back to the doctors,’ she said.

From there, she underwent a dilation and curettage (D&C) procedure to have the dead tissue removed from the uterus. D&C is a form of treatment carried out for conditions such as incomplete miscarriages or unwanted pregnancies.

‘I was anxious about how my body would feel afterwards,’ she said.

‘It was sad but it was a means to an end, so my body could heal and at the right time, try again. I felt empty but relieved and a little sore.

‘The pain for me was very mild, like a light period pain, which subsided in a few days.’

‘I was feeling nervous but not overly concerned,’ she recalled.

But the couple were left reeling once again after she suffered another missed miscarriage at eight weeks – the same time as her first pregnancy.

‘I felt sick and nauseous,’ she said.

‘I wanted to curl up in a ball and cry. It was lonely and I was numb. When we got home we were both in shock and utter disbelief.’ 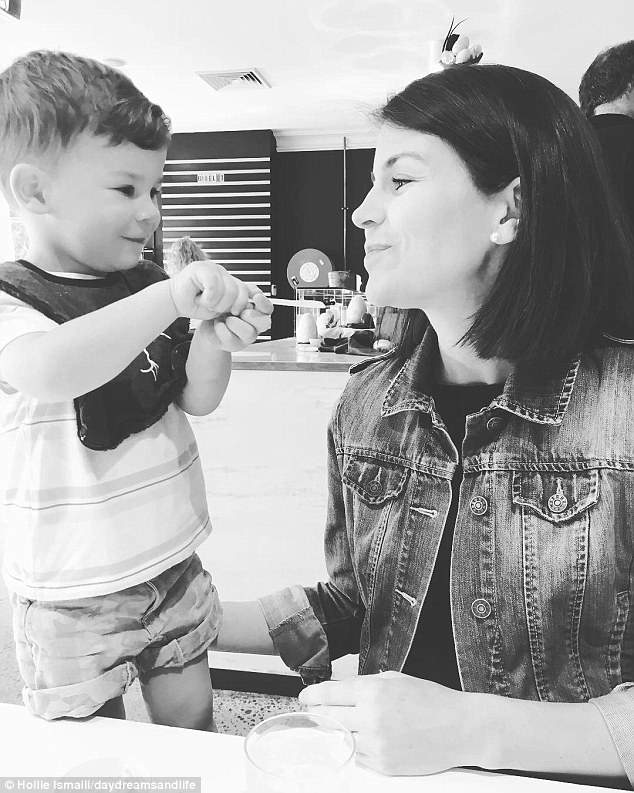 Like any mother-to-be, Hollie was ecstatic when she found out she was expecting a baby (pictured here with her toddler son) 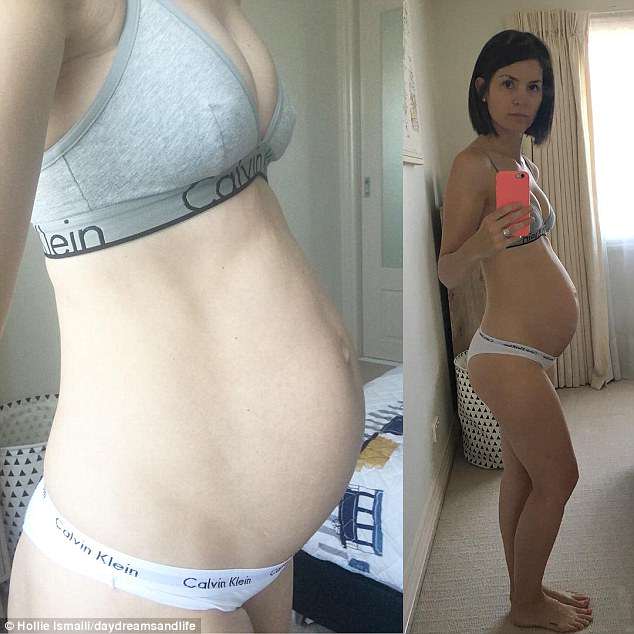 After miraculously conceiving her baby via ovulation induction, she was pregnant to Zac

Filled with emotions, Hollie said she returned to the doctors the next day to request another D&C because she couldn’t bear the thought of keeping the foetus inside her.

But she was told by doctors to wait for her body to do the miscarriage itself.

‘There was no way mentally I could wait weeks on end for my body to do this by itself, if it would by itself at all,’ she said.

After undergoing her second D&C just a few days later, Hollie said she felt her chances of becoming a mother was slipping away.

‘I felt flat and numb and disheartened. I felt like maybe we were never going to be parents and the thought of that was sickening,’ she said.

Following the procedure, Hollie said she felt something wasn’t right.

‘I bled for a lot longer than the normal amount of time. The first time I bled for a week after the procedure. This time was different,’ she said.

‘This time, I was still spotting after a few weeks. I called the emergency department and they said to come in.  I was told at the hospital, it can sometimes happen and it would subside, that if there was no pain or odour, then there was nothing wrong.’

As she continued to spot, she claimed her GP dismissed her symptoms.

‘After almost three months of bleeding, I went to another GP and requested a referral to a Gynecologist. Something just wasn’t right,’ she said.

‘I was hormonal and moody, I was teary and didn’t feel like my usual happy self. I got an appointment after a week or so because I had explained the situation to the staff.

‘The specialist suspected right away that there may be part of the foetus left behind or possibly all of it, but the only way to tell was to have an ultrasound done by another specialist.’ 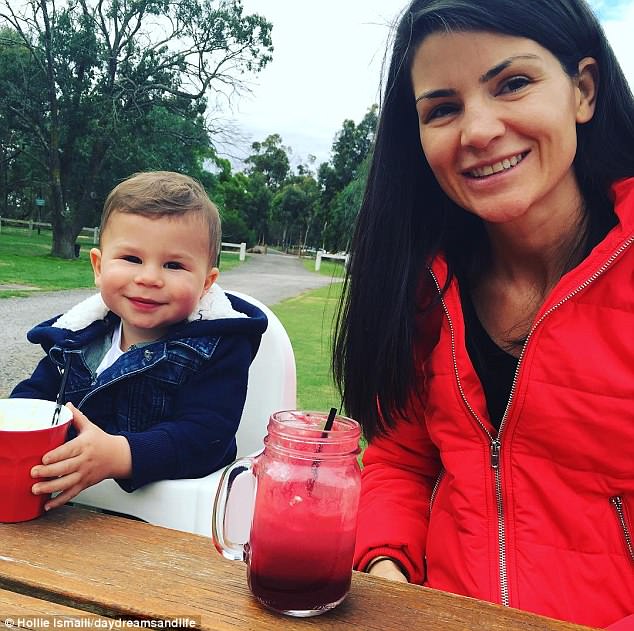 After a turbulent journey, the now 36-year-old has a beautiful toddler son named Zac 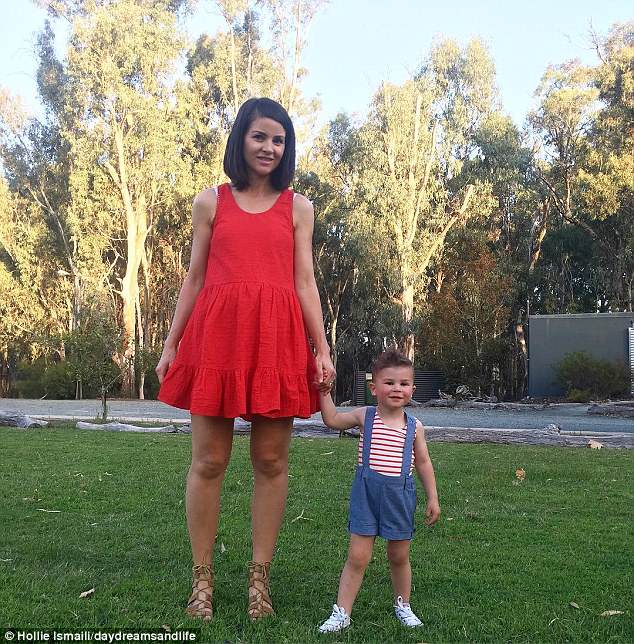 She was left shocked after scans found a whole foetus inside her.

‘Why had it taken so long for anybody to listen to me? I was furious I had to have a third D&C in just over 12 months and was concerned about the consequences it could have on my body and possible fertility in the future.

‘I had to go back to the same hospital and have the procedure done for a third time. They were extremely apologetic and I asked why they hadn’t scanned at the time of the D&C to ensure the D&C was successful.

‘They told me it wasn’t standard procedure but they would definitely do it this time.’

Due to the amount of D&C procedures she had in a short amount of time, her gynaecologist warned the lining of her womb was too thin for implantation to occur.

But three years later, Hollie fell pregnant again after conceiving her baby via an ovulation induction – but strangely, she was bleeding.

‘After four days of bleeding, my husband began to suspect something was up and asked if I could be pregnant,’ she said.

‘The question irritated me and I snapped at him that how could I be if I have my period. He waited a few more days, and he was brave enough to ask again.

‘I ignored his ridiculous notion I could be pregnant! Late that night I snuck off and did a pregnancy test anyway. It seemed so silly but I wanted to get him off my back.

‘To my utter shock it came up positive immediately.  I sat there for a second so confused.’

The bleeding eventually slowed down and after eight weeks, she started spotting.

‘By this time we had a couple of scans to confirm the pregnancy and when we finally saw Zac’s heartbeat, we were ecstatic,’ she said.

‘We knew we weren’t in the clear but we’d surpassed our previous two pregnancies and that was a first.’ 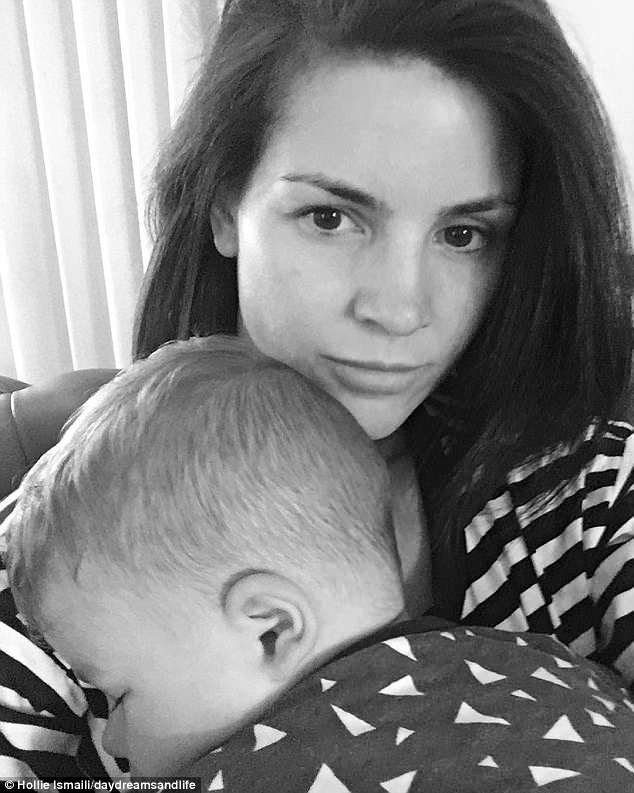 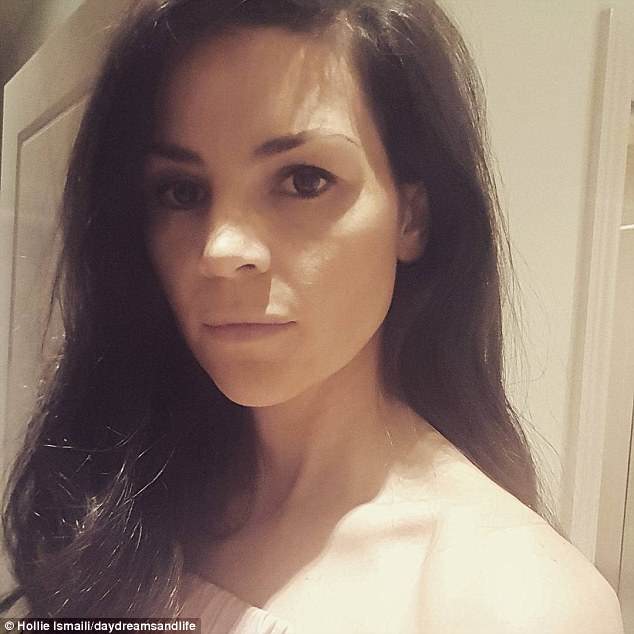 By sharing her story, Hollie said she wanted to raise awareness about missed miscarriage – an issue not many women speak about

And miraculously, Hollie gave birth to her baby son weighing a tiny 2.34kg.

‘Zac was born healthy and happy,’ she said.

‘He came into the world quietly and we were in awe of this tiny miracle who had made us proud parents. We had finally realised our dream of becoming parents.

‘Nothing had made us happier than that. We felt complete and our hearts were full.’

‘My second pregnancy has been more low key, fortunately,’ she said.

‘It has been calm and fairly routine. We feel really blessed to be having another healthy baby.

Zac came into the world quietly and we were in awe of this tiny miracle who had made us proud parents. We had finally realised our dream of becoming parents

‘All tests and scans have gone well and the pregnancy has been quite straight forward. It’s been such a relief.’

By sharing her story, Hollie said she wanted to raise awareness about missed miscarriage – an issue not many women speak about.

‘I have been fairly open about our journey to have a baby and our experience on social media because I found it so shocking back in 2012 and 2013 with my first two pregnancies, that missed miscarriage just wasn’t spoken about. At all,’ she said.

‘I didn’t want other women who had been through the same experience to suffer in silence, or feel alone. Turns out missed miscarriage is common.

‘Once the topic is brought up, many other women have been through the same thing. Why are we not taught that this can and does happen. Why are we not more educated? I hope this creates awareness.’ 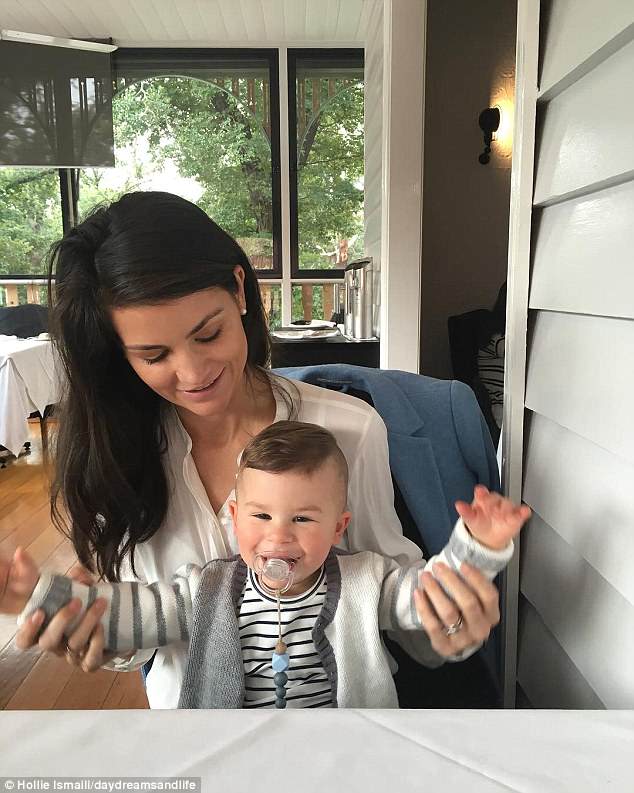 Five years on, Hollie said the only regret she has was not seeking professional help when she and her husband endured a double loss (pictured with her happy son Zac)

Five years on, Hollie said the only regret she has was not seeking professional help when she and her husband endured a double loss.

‘If I could turn back time, I would seek counselling for the loss and to prevent the stress or miscarriage and trying to convince can cause on a marriage,’ she said.

‘It can really take a toll and I think looking back we just had no idea what an ordeal it was that we had been through.

‘In hindsight we probably should have gone through ovulation induction sooner, we perhaps waited too long and could have done something about it sooner.’

For anyone who has suffered a missed miscarriage, Hollie said: ‘You’re not alone.

‘Don’t be afraid of being vulnerable and speak to friends and or family,’ she said.

‘It’s important to seek out the right support for you and your partner and when the time is right make sure your specialist is the right fit for you.

‘It’s integral to have a great support network.’