Mother-of-two, 61, reveals the diet and workout tips that helped transform her body

A fitness fanatic who says she looks better now in her sixties than she did in her thirties has revealed the diet and workout tips that can transform your figure at any age.

Bobbi Parker Hall, 61, from Portland, Oregon, said that clean-eating and working out has helped hone her physique, but claims that weight training is the trick which truly transformed her body.

The mother-of-two, who now displays washboard abs, struggled with losing weight up until her mid-fifties, and would do endless amounts of cardio to shed body fat – without seeing much improvement in her physique.

Bobbi only ended up seeing drastic results after increasing her food intake and adding heavier weights into her gym routine, and believes she looks better now than she did when she was 30.

Bobbi Parker Hall, 61, from Portland, Oregon, has revealed that weight training was the trick which truly transformed her body and helped her achieve her washboard abs 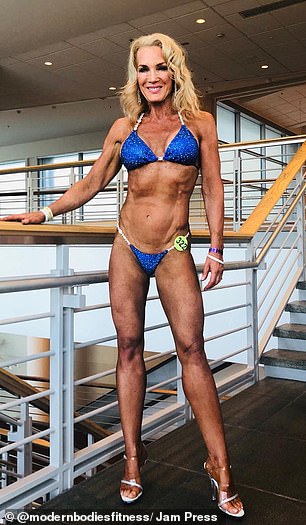 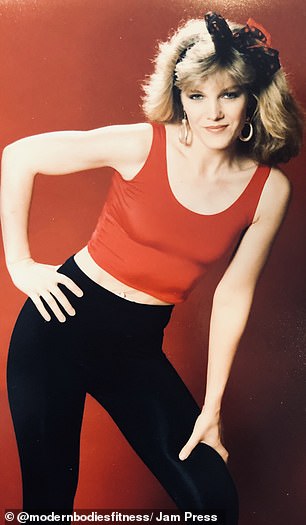 The mother-of-two previously struggled with losing weight, but now competes in bikini fitness contests. Bobbi (pictured in her 30s) says she now looks better at the age of 61 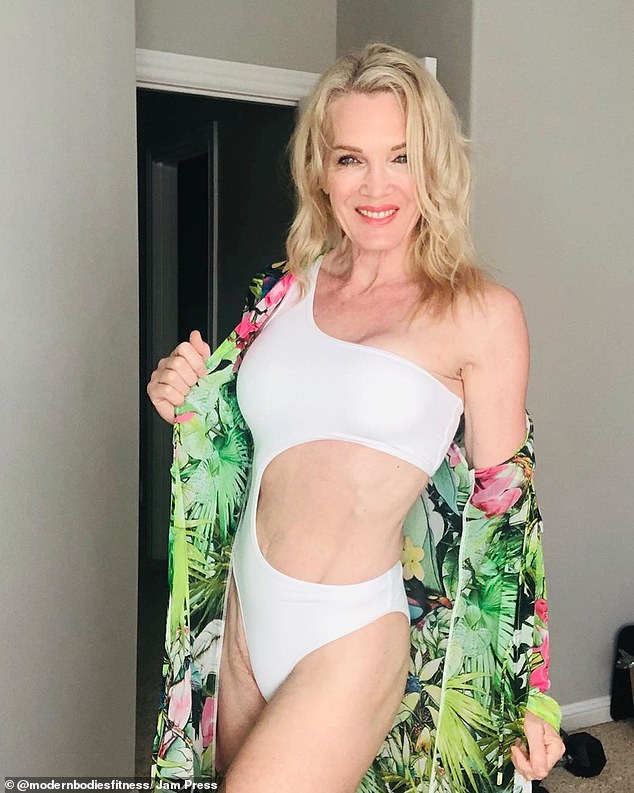 She said: ‘Until I hit mid-fifties, I always struggled with the last 10-15 lbs – I have small hips so I could carry it off and always looked skinnier than I was. My fat always went to my stomach area, thighs and arms too.

‘But when I figured out my food and started adding more weights than cardio, it all changed for me. That was really the key, because even though I was a personal trainer I still fell into the mind trap of believing I needed more cardio to look like I wanted to look.’

Bobbi, who used to be a bikini competitor, urges older woman to focus on eating properly and not to be afraid of weight training because many believe weights will make them look bulky. Contrary to popular belief, Bobbi insists this is not the case.

She said: ‘Women especially in that age group don’t eat enough, are still skipping breakfast and they still are too focused on cardio.

‘They are afraid weights will make them bulk up. The way I look at it is, I would rather look a little bulky and firm than have unhealthy, loose fat. 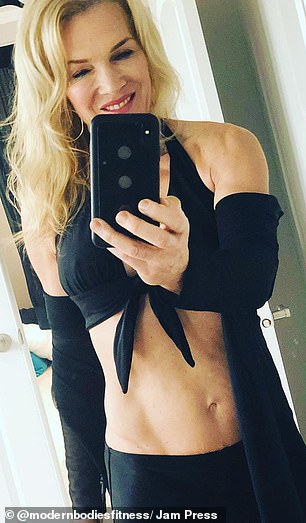 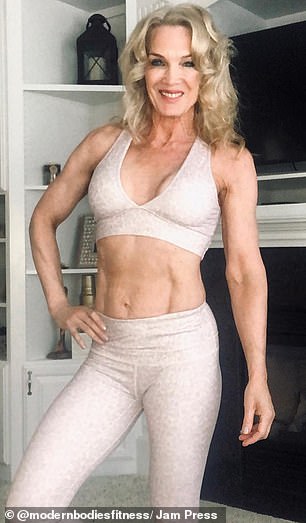 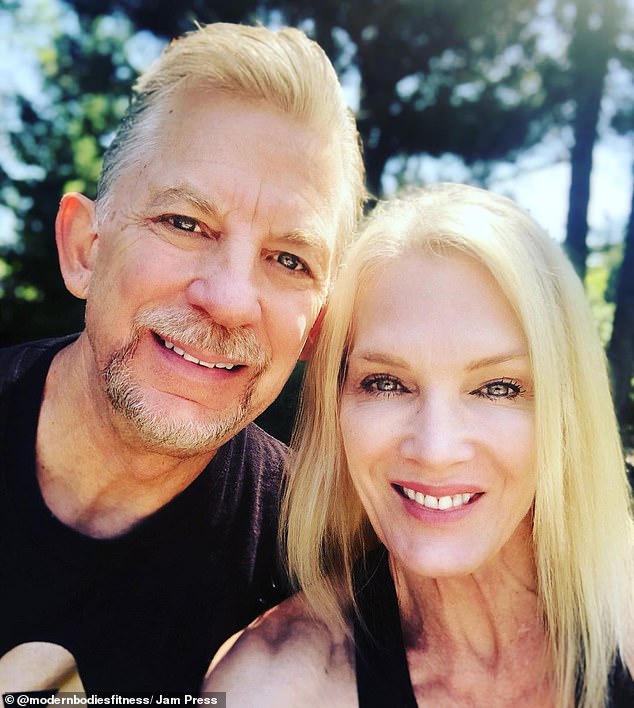 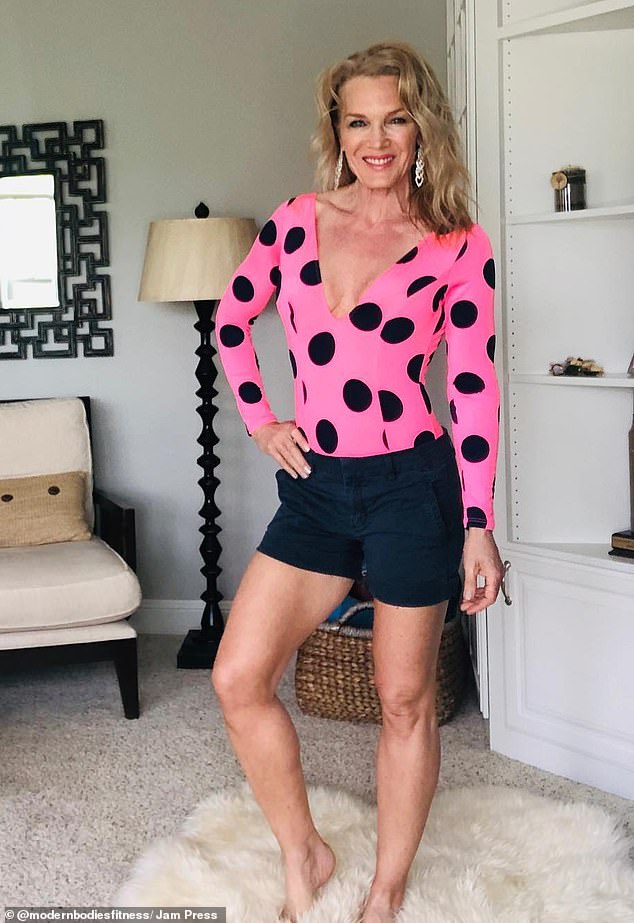 ‘But if you are the type of body that bulks, you can control that too by finding the right combination of weight training, cardio and your diet.

‘The body is responsive and you can mold and shape it to look how you want. I never thought I could wear a bikini; in fact, I hated my body before I did a competition. I would only wear a one piece.’

Bobbi stresses the importance of loving one’s body at any age, no matter how you look and says that confidence is the key to living a youthful life.

She added: ‘This brings me to another subject of body dysmorphia which a lot of us have. Learning to love you, and how God made you, is the most important thing a woman can do.

‘The you have the confidence that shines through no matter what you look like.’ 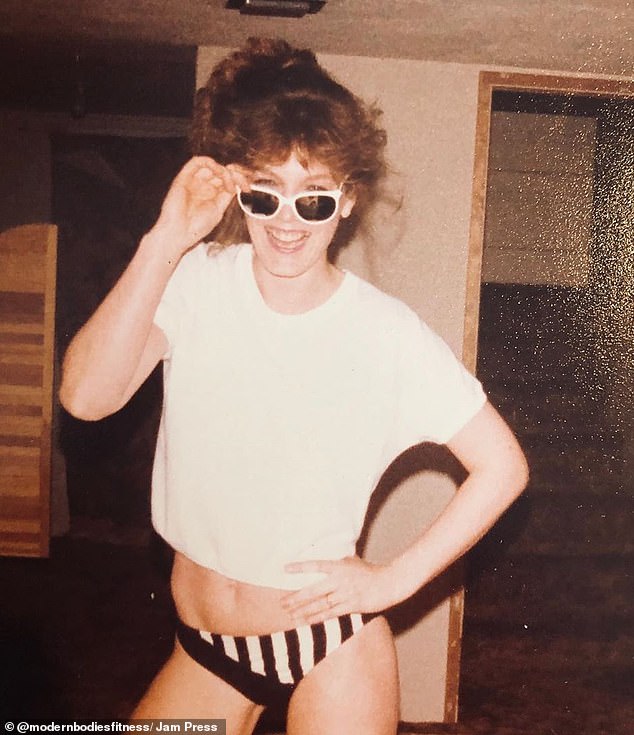 Bobbi (pictured in her 30’s), who used to be a bikini competitor, said she never thought she could wear a bikini before she started training 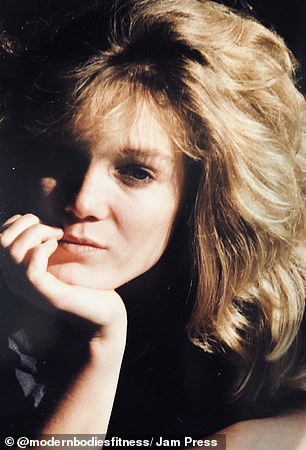 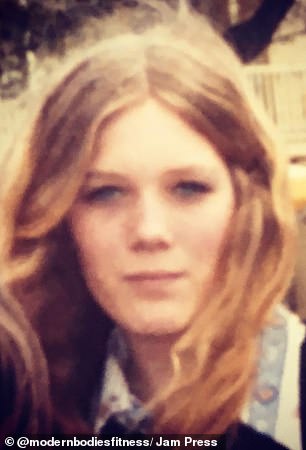 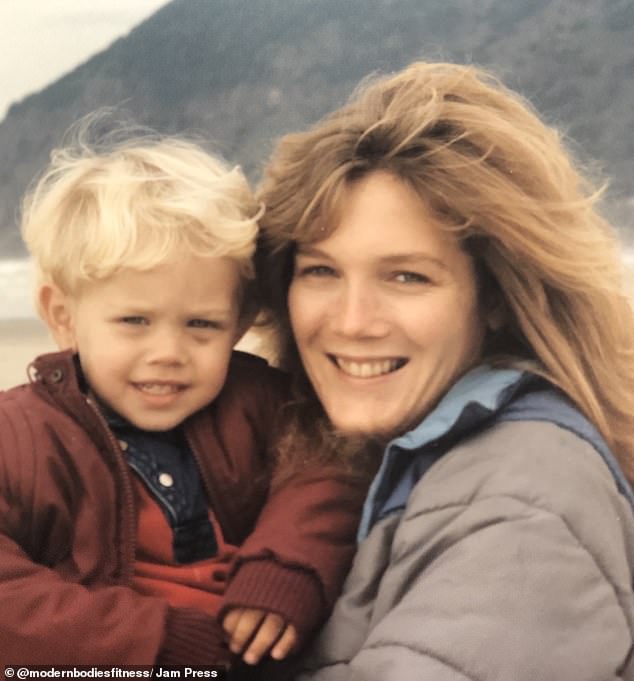 Bobbi (pictured in her 20s) said that she now looks better in her 60s, after discovering weight training as a way of keeping fit

Bobbi, who is a divorcee, says that fitness is a way for her to cope with life changes and recharge herself mentally, physically and emotionally.

She said: ‘Hormones, menopause, thyroid problems are the physical problems.

‘This can also be a time big life changes for women such as children gone, divorce, loss of spouse, having to take care of ageing parents. Also, just dealing with the fact that we are ageing can be really hard.

‘But I have found fitness to be one of the best things to help with re-booting your life at this stage. We don’t have to give up on our hopes and dreams.

‘Getting your body fit helps us mentally and emotionally too.’ 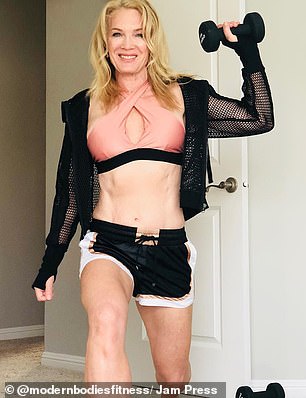 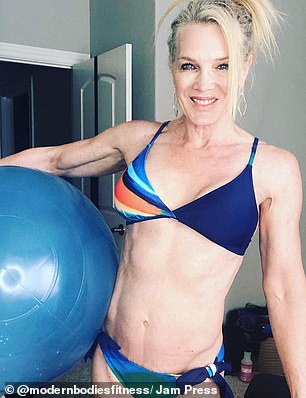 The fitness coach stressed the importance of loving one’s body at any age and said: ‘Then you have the confidence that shines through no matter what you look like’ 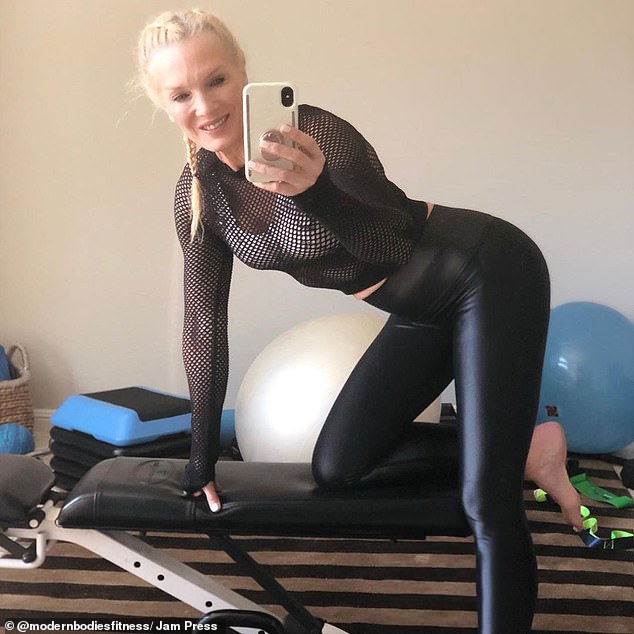 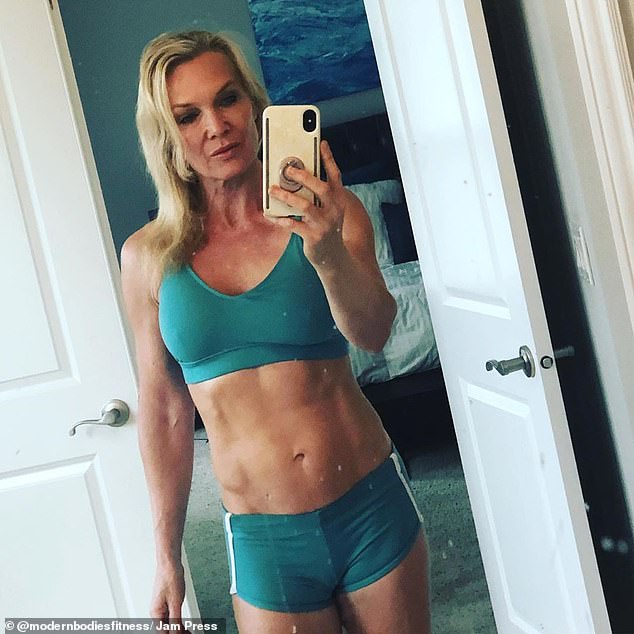 The fitness coach said despite the changes that women are faced with as they get older, fitness had helped her re-boot her life

The mother-of-two insists that looking younger should not be the main focus of working out, saying that feeling good from within is what counts the most.

She added: ‘I think it doesn’t matter what our age is. Women always want to feel attractive and desired. Even at 80-years-old. I have seen it; we always care about how we look.

‘I think the key is to not get stuck in any age about how we should look. I mean, accept the fact that we are ageing and look your best, but don’t try to look like you are 40 when you are 60.’

Bobbi now wants to use her years of fitness knowledge to help other people get back on track and transform their lives for the better, while preaching her motto ‘food is medicine’.

She has since started her own Instagram page @modernbodiesfitness as an online personal trainer, hoping help more women achieve the body they want, and at the same time improve their emotional and mental well-being. 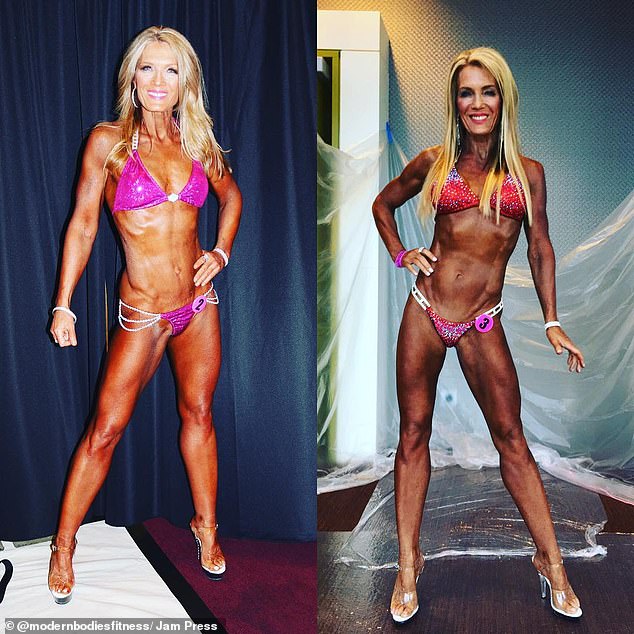 The mother-of-two, pictured taking part in a bikini fitness contest, said women always want to feel attractive and desired no matter what their age 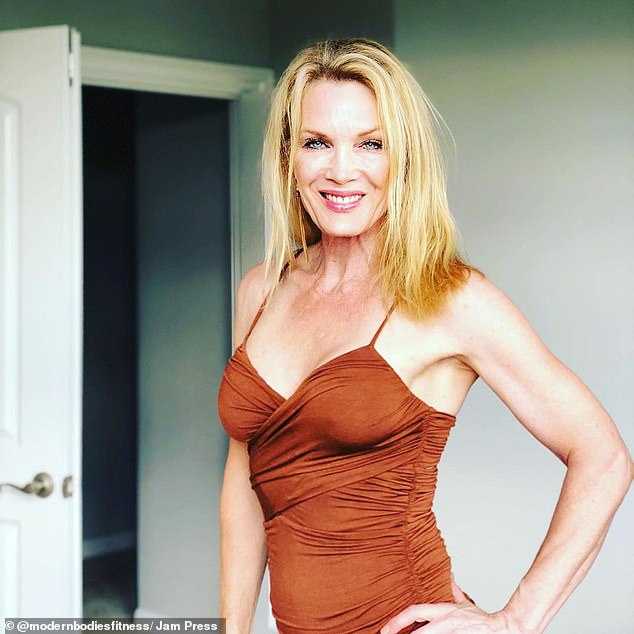 Bobbi said: ‘I think that people who are hurting feel comfortable sharing their pain with me.

‘I’m OK  with that and I’m glad that women have felt comfortable opening up to me. It’s never gotten out of hand, but it makes you realize that people have a lot of s*** they have to deal with and it can really weight them down.

‘It becomes the reason why they can’t or just don’t have the time to really take care of themselves the way they want to.

‘It can be a big obstacle to getting in shape, I get it. I want to come up with a way to help them carve out a few minutes for themselves, maybe it’s just doing a few planks or sit-ups, or stretching 5 min here and there.

‘And It can make them feel so much more empowered just doing a little bit for themselves everyday, which then grows into 10-15 min. Who wouldn’t want to feel sexier, better and stronger?’

Bobbi met her partner Dean Hall, a fellow fitness fanatic, five years ago after divorcing her ex-husband, and the pair have been in love ever since.

Dean is a two-time cancer survivor and swims rivers to encourage cancer patients to never give up on their hopes and dreams.

Last year, Dean became the first person to swim the entire River Shannon in Ireland and hit another record in 2014, after he become the first to conquer the 184-mile length of the Willamette River in Oregon – as he battled cancer. 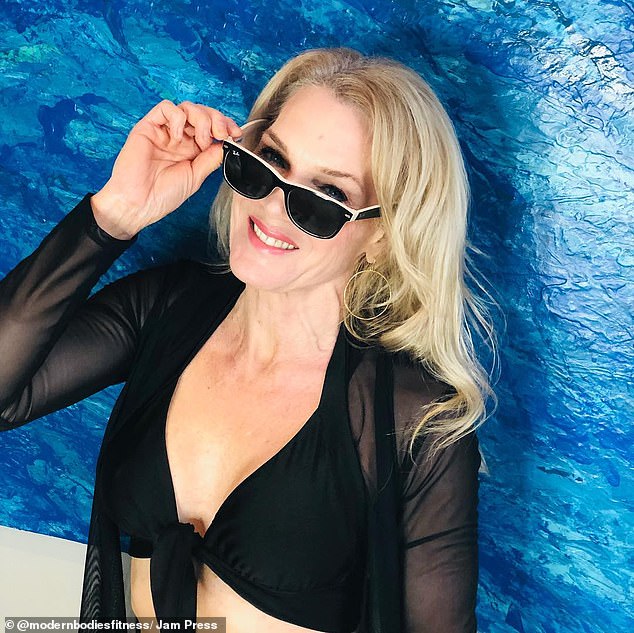 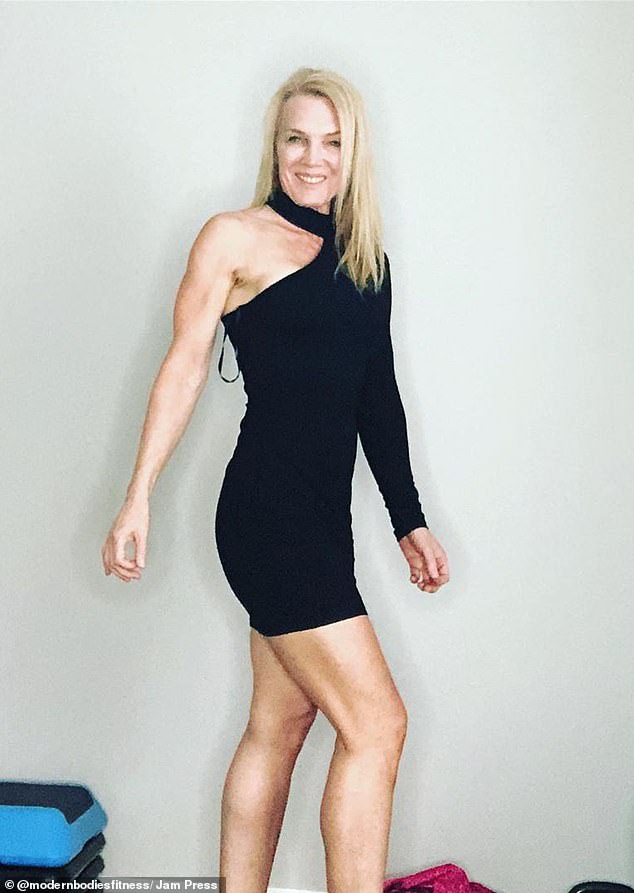 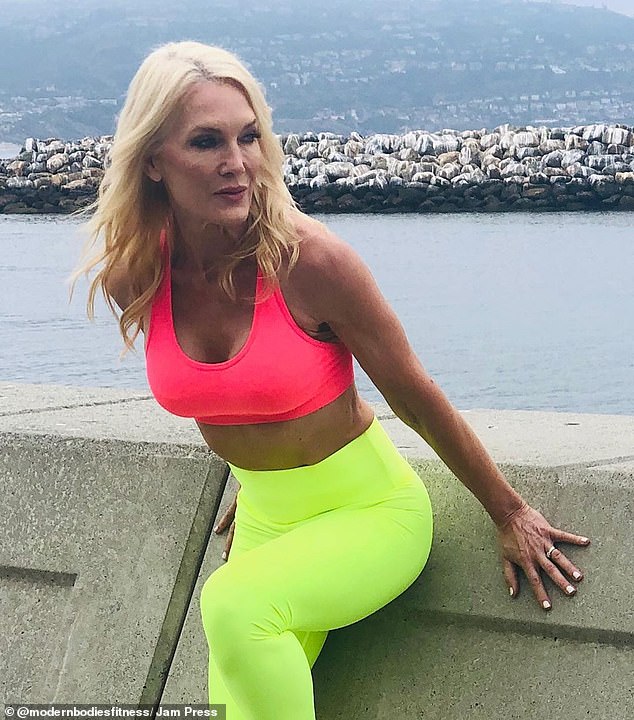 She has also urged people avoid cosmetic surgery, to accept themselves for how they are, and to take care of their health

Dean, who also works as a marriage therapist and life coach, swam to raise awareness of cancer and also get funds for cancer charities Leukaemia and Lymphoma Society and Childhood Cancer Foundation of Ireland.

Bobbi’s says her top tips for looking young over the age of 60 are to stay active, build muscles and eat healthy most of the time.

She has also urged people to accept themselves for how they are, avoid cosmetic surgery, and to take care of their health, adding that your 60s can be the best years of your life if you work on it.

Bobbi said: ‘Get a little help when needed but stay as natural as possible.

‘Don’t overdue cosmetic surgeries and procedures but have a good doctor that knows what they are doing.

‘Be you. Go grey if you want to and dye your hair if you want to. Accept where you are at with your age and love the people in your life.

‘Get your hormones checked and take care of your health. These can be your best years in so many ways; sexually, physically, spiritually and emotionally, can be a real satisfaction in all of these areas if you allow it and work towards it.’