Mother-of-two was left DEAF by her pregnancies

A mother who panicked when she couldn’t hear her first baby crying was shocked to be told pregnancy had left her deaf.

Kate Llewellyn-Waters lost 60 per cent of her hearing while pregnant with her first child, Beatrix, who was born in 2013.

A condition called otosclerosis, which can be accelerated by hormones released in pregnancy, caused the tiny bones inside her ears to fuse together.

Mrs Lllewellyn-Waters then lost a further 10 per cent of her hearing when her second child, Albert, was born two years later.

Now using hearing aids to cope with her dramatic hearing loss, Mrs Llewellyn-Waters has since found out the condition runs in her family.

And she insists she won’t be having a third child, which could send her completely deaf.

Kate Llewellyn-Waters, from London, lost 60 per cent of her hearing during her pregnancy with Beatrix (pictured, shortly after her daughter was born in 2013) 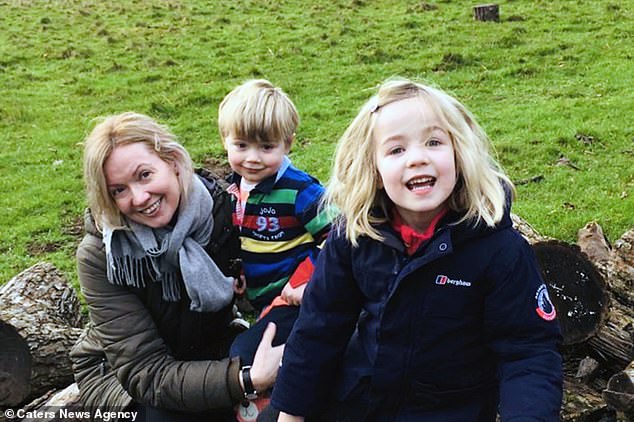 Mrs Llewellyn-Waters (pictured this year with Beatrix and Albert, now six and five) now relies on hearing aids because corrective surgery could destroy her hearing completely

‘I had no idea I was going deaf, not at all,’ the married mother-of-two, from London, said.

‘I was pregnant so lots of changes were going on and I didn’t notice my hearing loss till my husband noticed I wasn’t hearing him as well.

‘I was told straight away that it was bone growth – and it would only improve with a risky operation that is likely to leave me completely deaf.

‘But the changes were so little, I didn’t think anything of it but after giving birth to Beatrix, my hearing almost instantly declined.

‘After having a C-section, I began to panic as I couldn’t hear Beatrix crying but she was crying, I was just deaf.’

Mrs Llewellyn-Waters was diagnosed with otosclerosis in which the three small bones deep inside the ears grow bigger than normal.

These bones vibrate with sound and transmit sound waves to the inner ear and brain, but in people with otosclerosis the bones fuse together and cannot move.

This prevents sound from travelling properly through the ear and into the brain, reducing – or even completely destroying – someone’s hearing.

Although its causes are poorly understood, the NHS says it’s believed to be genetic and high levels of oestrogen released during pregnancy can make the condition develop faster.

The menopause may also contribute to the hearing condition, which the health service calls a ‘fairly common’ cause of hearing loss. 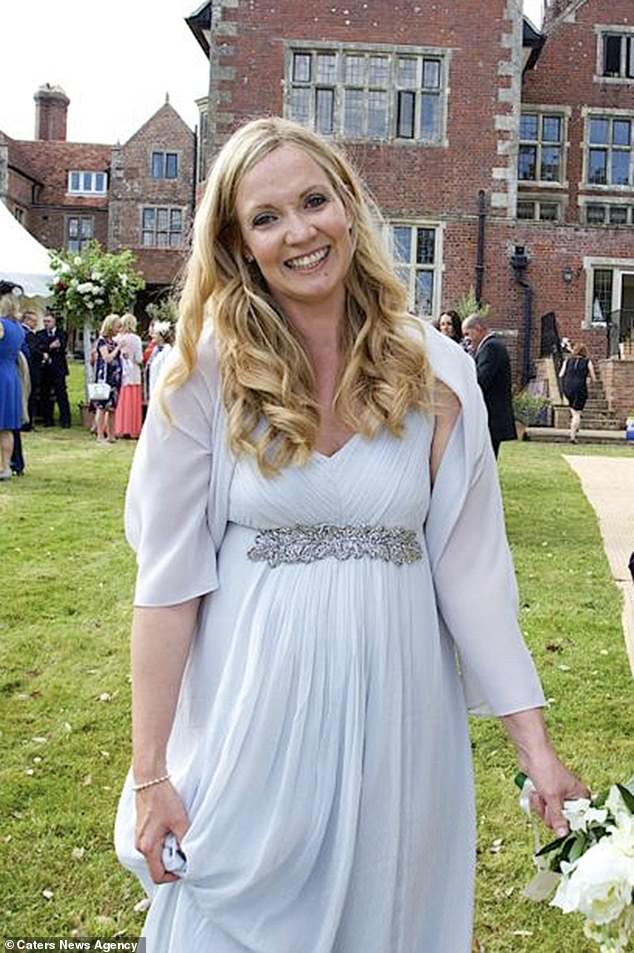 Mrs Llewellyn-Waters (pictured while pregnant with Albert in 2015) said she didn’t know she was going deaf until her husband realised she couldn’t hear him, and she went to a doctor 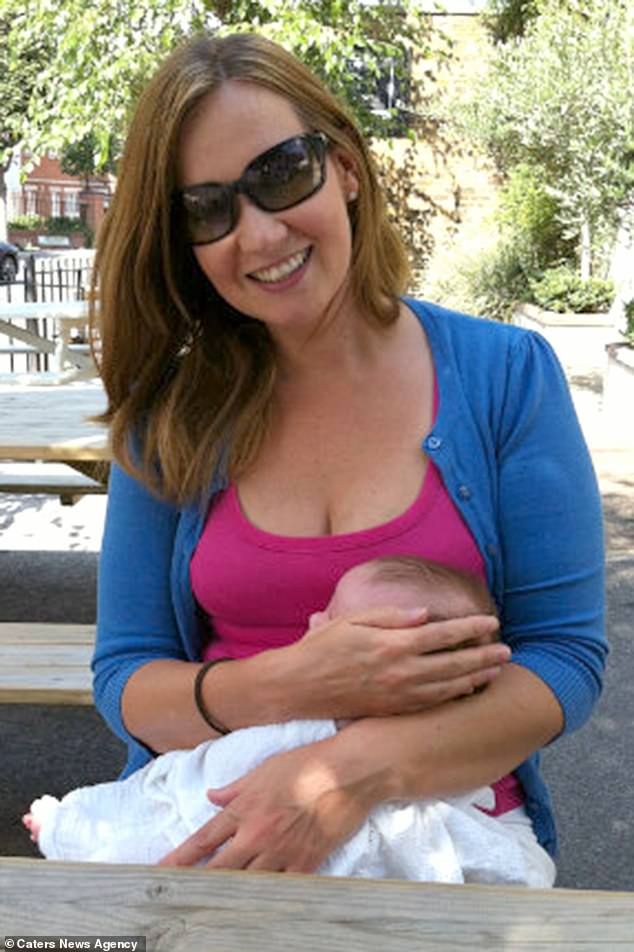 By the time Mrs Llewellyn-Waters had given birth to her second child, Albert, she had lost 70 per cent of her hearing, leaving her severely deaf (pictured with Beatrix as a baby) 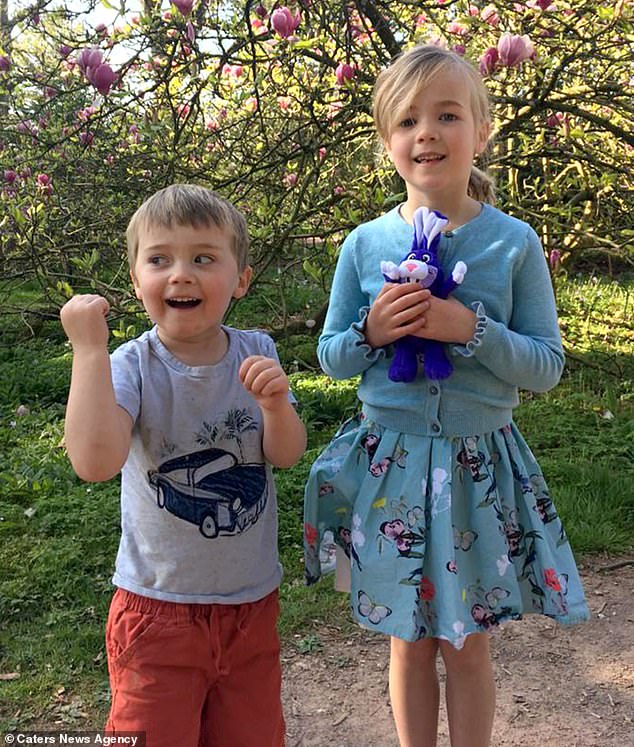 Albert and Beatrix are now older and understand they have to be more patient with their mother, Mrs Llewellyn-Waters said, because she cannot always hear what they say. She says the deafness makes her anxious she won’t hear the children if they cry out for her help

Otosclerosis is a condition which causes deafness when the tiny bones inside the ear grow too large and fuse together.

These bones are crucial to hearing because sound waves travelling into the ear cause them to vibrate, which sends signals to the inner ear and the brain which interpret the noise.

In patients with otosclerosis, these bones grow too large and fuse together, meaning they cannot vibrate properly.

This may reduce someone’s hearing or, in rare cases, the bones can fuse completely solid and leave someone entirely deaf.

People usually begin to notice they have the condition in their 20s and 30s, and the NHS says it is a ‘fairly common’ cause of hearing loss.

There are no clear figures for how many people in the UK have otosclerosis but it is believed to affect around three million Americans.

The condition has been found to speed up in pregnant women or those going through the menopause.

This is believed to be because high levels of the hormone oestrogen are released during these phases of a woman’s life and encourage the bones to grow.

People who lose their hearing to otosclerosis can use hearing aids or have corrective surgery to reduce the bone growth – this is successful for between 80 and 90 per cent of people.

‘I found out that my grandmother had lost all hearing in her left ear whilst pregnant with my father,’ Mrs Llewellyn-Waters said.

‘Now, I feel like I’ve turned into my grandma and am now slightly older than my years.

‘My hearing has continued to decline, and currently I’m at 70 per cent hearing loss.

There is an operation available, but it can go wrong and lead to complete deafness.’

The NHS says surgery can restore people’s hearing in between 80 and 90 per cent of cases.

For now, though, Mrs Llewellyn-Waters is relying on hearing aids and the help of her children, now aged five and six, to live her life as normal.

‘I’m fortunate that my hearing aids allow me to hear a little,’ she said.

‘But before they managed to get them to work, I had to rely on lipreading.

‘My children have learnt they need to be more patient as I can’t always hear them, although my hearing aids are fantastic.

‘I have alarms and monitors in my children’s rooms so I can hear them when I am downstairs and they are upstairs.

‘We’ve had to learn to adapt, and it was a side effect of pregnancy that I definitely wasn’t expecting.’

Mrs Llewellyn-Waters said being deaf has made her more anxious and concerned she won’t be able to hear her children if they call for help.

And audiologists have told her she is ‘so young’ to be affected by the condition – although the NHS says people tend to notice symptoms in their 20s and 30s.

She added: ‘I could go totally deaf if I had a third child, but I don’t regret for one moment having children. I definitely won’t be having a third though!’