Crocodile rock! Mother shares video of her daughter playing the saxophone on an idyllic beach… but it’s the ominous creature behind her that’s caught people’s attention

A mother who filmed her daughter playing the saxophone on a beach has sparked an online debate after viewers spotted what some believe to be a crocodile hiding in the water.

Stephanie Henry was recording her daughter playing music at East Point, an inner northern suburb of Darwin in the Northern Territory, on Wednesday.

Small waves crashed up on the shore before a small crocodile seemed to appear just a few metres away from Ms Henry’s daughter.

Northern Territory Parks and Wildlife Facebook page uploaded the video and viewers debated whether it was a crocodile or something else.

Stephanie Henry was filming her daughter playing music at East Point, an inner northern suburb of Darwin in the Northern Territory on Wednesday

The video was titled ‘Croc or not’ and featured a poll where viewers could share their opinion.

But the debate continued in the comment section where many people shared their theories about what was in the water.

‘It’s a rock, not a croc. If that was a croc, she wouldn’t be still standing there,’ one person said.

Another said: ‘Not the first time I’ve seen crocs right up in the shallows. Thankfully they have all been little ones.’

One commenter said: ‘I think not. It seems to bounce around like it is a piece of plastic.’

‘I think it is a crocodile in the water edge,’ another wrote. 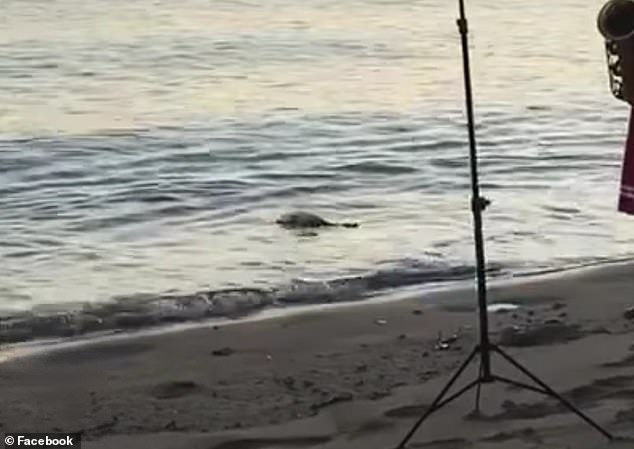