A mother has revealed her heartbreak after losing one of her twin babies when they were born at just 24 weeks.

Doctors tried to administer life-saving drugs to protect the baby girls’ brains and lungs while they were still in the womb.

With the birth progressing quickly, Mrs Simons believes baby Esme became stuck in the birth canal to delay her sister Isla’s birth, allowing her twin to get the drugs she needed.

Despite doctors attempting to resuscitate Esme for five minutes, the newborn did not make it, with Mrs Simons maintaining she sacrificed herself for Isla, who turned one on January 20 this year. 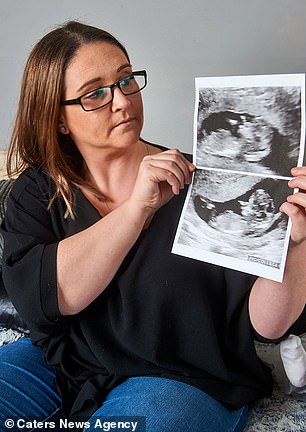 Ashley Simons (pictured right with her ultrasound scan) believes her daughter Esme got stuck in her birth canal so her twin Isla could get the drugs she needed while in the womb. Esme was stillborn, while Isla (pictured left on her final day of a 138-day stint in hospital) is now thriving 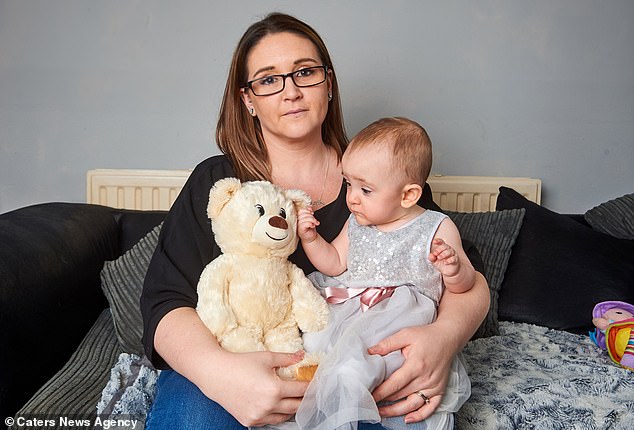 Mrs Simons (pictured recently with Isla) went into labour at just 24 weeks. Doctors rushed to administer drugs that would help protect her babies’ developing lungs and brains. Mrs Simon’s believes Esme made the ultimate sacrifice so her sister could get the medication she needed

Mrs Simons and her husband Mitchel, 32, were thrilled to discover they were going to be parents after spending five years trying to conceive and £6,000 on IVF.

‘We’d had to go all the way to the Czech Republic to have successful IVF,’ Mrs Simons said.

‘And despite having a cervical ectropion, which was essentially a graze on the cervix which had caused some bleeding, I had a great pregnancy.

‘Me and Mitchel were ecstatic and so excited that our dream had come true.’

But the couple’s joy was short lived when Mrs Simons – a special needs teacher – went into labour early.

‘I was at home at the time and it wasn’t until I suddenly felt something drop down through my womb that I began worrying I was in labour,’ she said.

‘Panicking we rushed to Basildon and Thurrock University hospital, where I was told I was showing signs of being in labour.

‘Doctor tried to stop the labour but because I was fully dilated, there was nothing they could do.

‘I was told the chances of the babies’ survival was very low and if they did survive, they’d be take straight to intensive care.’ 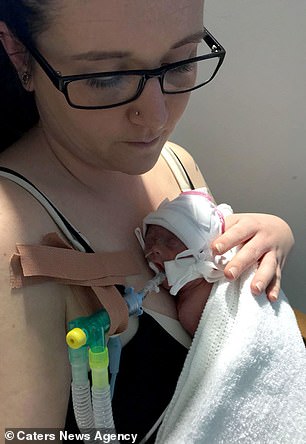 Mrs Simons (pictured left with Isla recently) spent five years trying to conceive and £6,000 on IVF. After a near-perfect pregnancy, the special needs teacher was devastated when she lost Esme, while Isla (pictured right with her mother as a newborn) was rushed to intensive care 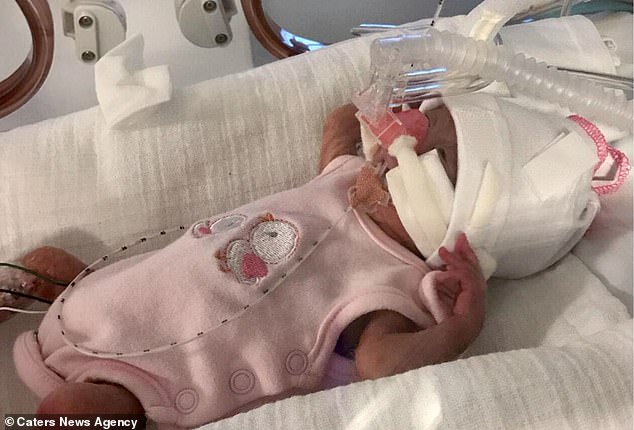 Isla – who spent 54 days on a ventilator (pictured) – was diagnosed with a grade 4 brain bleed and a valve in her heart that had not closed properly. These issues have since resolved

As soon as Esme was born, Mrs Simons instantly knew the little one had not made it.

‘I was told Esme had a heart beat right till the last minute she was born,’ she said.

‘I knew straight away that there was no sign of life.’

Mrs Simons believes Esme made the ultimate sacrifice to give her sister a chance at life.

‘She’d given Isla the time she needed to be able to get the medication the doctors were administering to me,’ she said.

‘They used steroids and magnesium sulphate, and because Esme had planted herself in the birth canal, Isla had time.’

Steroids are often given to women who go into labour before 35 weeks to help stimulate the development of their babies’ lungs.

Mrs Simmons added: ‘Esme saved her and is her guardian angel.’ 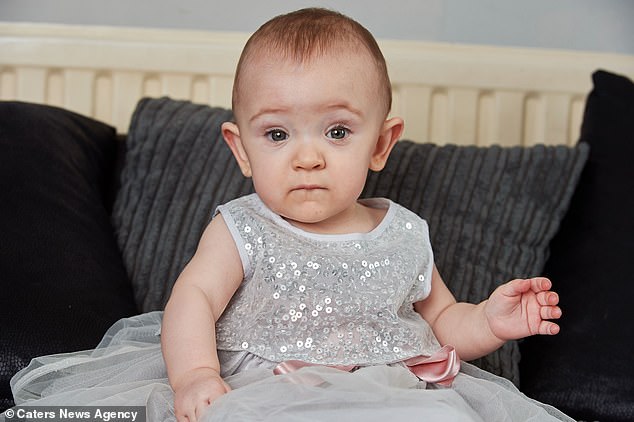 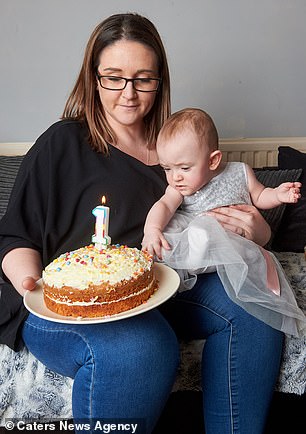 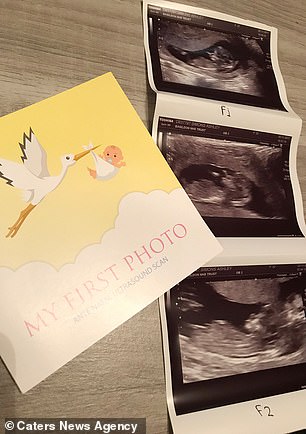 Isla arrived 50 minutes later and was immediately transferred to the Royal London hospital, while her parents said goodbye to Esme.

‘We held Esme and treated her like a normal baby, we took photos with her, and took hand and footprints,’ Mrs Simons said.

‘We were even able to change her nappy and dress her thanks to a cuddle cot, which is a cold bed for babies who have died.

‘Then as we prepared for Isla’s transferal, a nurse stayed with Esme as I didn’t want her to be on her own.’

Isla – who spent 54 days on a ventilator – was diagnosed with a grade 4 brain bleed and a valve in her heart that had not closed properly.

‘Isla is a fighter, even now – the bleed is resolving itself although they don’t know what long term damage it might have had,’ Mrs Simons said.

‘The valve has closed on its own and she’s now able to breathe on her own.’

After spending 138 days in hospital, the youngster was finally able to go home.

In Esme’s memory, the couple have started making care packages – that include everything from deodorant to knitted hats for newborns – for families who have to unexpectedly stay in hospital.

‘We want to work alongside families who are in hospital, who are experiencing similar things,’ Mrs Simons said.

‘We now make care packages for families that are in a similar situation to us – they contain essential items like toiletries and personal care.’

The care packages are available here.

WHAT IS A PREMATURE BIRTH, AND WHAT ARE THE RISKS TO BABIES?