A baby born two months early with holes in her heart was brought back to life after dying in her mother’s arms for 11 minutes.

Ramaya Wilkinson was born at just 28 weeks via an emergency C-section after she stopped moving in her mother Emma Burns’ womb.

She weighed just 1lb 4oz when she entered the world and was given just a 20 per cent chance of survival. She spent weeks in intensive care.

Ms Burns, 30, from Doncaster, who had already given birth to two stillborns before Ramaya, was unable to hold her daughters until she was three weeks old.

And when they finally did meet, Ramaya’s heart stopped beating in her mother’s arms for 11 minutes, forcing doctors to perform emergency CPR.

Ramaya pulled through once again, with Ms Burns and the youngster’s father Jordan Wilkinson, 24, calling the now six-month-old their ‘little miracle’.

Emma Burns is pictured holding her daughter Ramya after the youngster previously ‘died’ in her arms when her heart stopped beating for 11 minutes. Ms Burns, who suffers from a disorder that causes blood clots, has suffered two stillbirths and thought she was losing another child 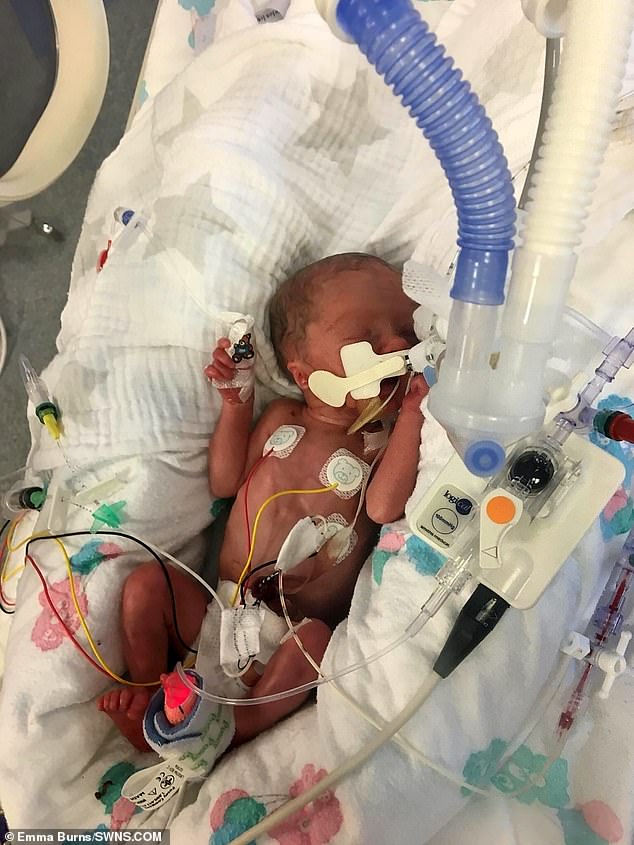 Ramya is pictured being treated in hospital after her heart spontaneously stopped. Doctors were forced to perform emergency CPR to get the organ beating again. The youngster, now six months old, was born with holes in her heart and given just a 20 per cent chance of surviving

Speaking of the ordeal, Ms Burns said: ‘She was in my arms when she suddenly went limp and died in my arms.

‘She went blue and I started screaming. I thought she was going to die.

‘Doctors spent seven minutes getting her heart going again, it was terrifying, but she kept fighting.’

To bring Ramaya back around, doctors performed emergency CPR, but were unable to get her little heart beating again.

As a last resort, Ramaya was placed on machines to help her breathe and, after ten agonising minutes, her heart restarted.

‘I can’t describe that feeling. My whole body froze. I just wanted someone to save my daughter. I didn’t want to have to bury another baby,’ Ms Burns said.

The youngster has since been diagnosed with apnoea, which can cause her to stop breathing randomly, as well as the holes in her heart.

She is also deaf in her right ear, has sight problems and requires weekly check-ups to keep track of her development.

Ms Burns, who is also mother to Tia, 14, and Pria-Louise, five, said: ‘At six months old, she now weighs about eight pounds, a normal weight for a new born.

‘It’s like she shouldn’t be here but here is she. To me she is amazing. It’s hard to describe what we’ve been through but it’s good to have her at home.’ 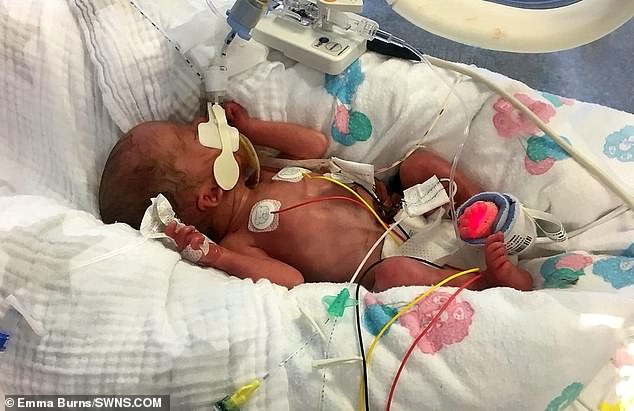 Ramya is pictured in intensive care, where she spent weeks after her traumatic delivery 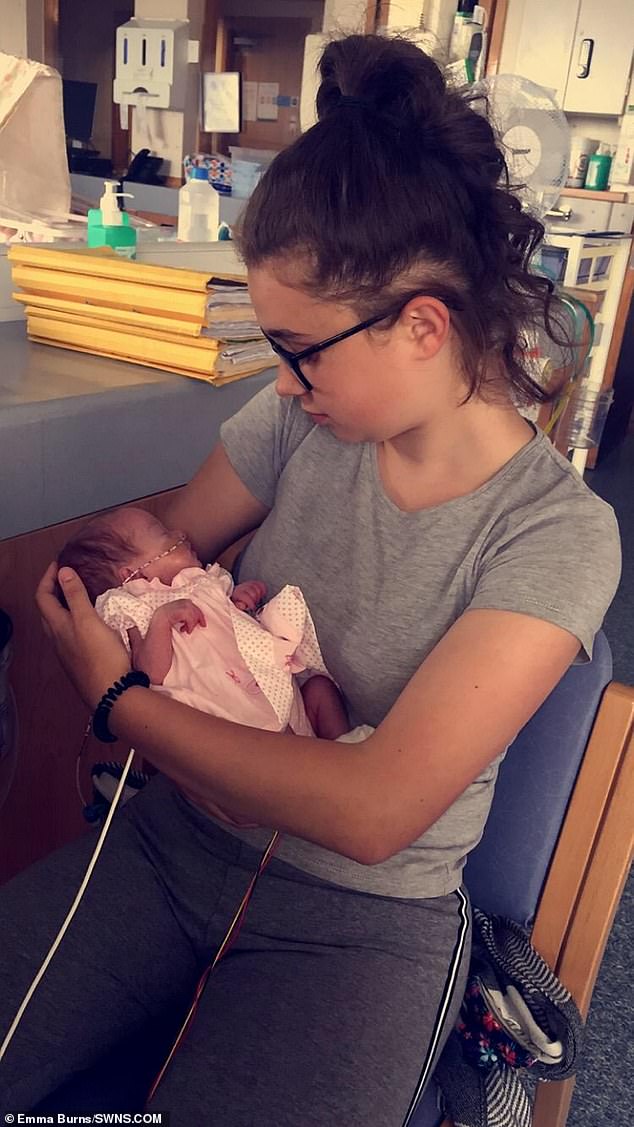 Pictured after Ramya pulled through, the youngster’s heart stopped beating the first time her mother (also pictured) held her. The pair were only able to meet when the newborn was three weeks old due to Ms Burns developing sepsis following a traumatic C-section 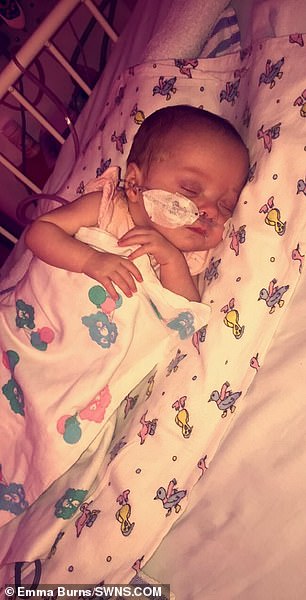 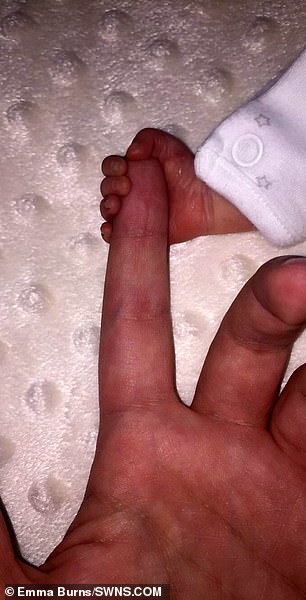 Pictured left in hospital, Ramya is deaf in her right ear, has sight problems and requires weekly check-ups. Weighing 1lb 4oz as a newborn, she could barely grasp the tip of a finger (right)

WHAT IS ANTIPHOSPHOLIPID SYNDROME?

Antiphospholipid syndrome (APS) – also known as Hughes syndrome – is a disorder of the immune system that causes an increased risk of blood clots.

Sufferers are more likely to develop deep vein thrombosis; artery clots, which can cause stroke or heart attacks; and blood clots in the brain, which can affect balance, vision, speech and movement.

Pregnant women with APS are also more likely to miscarry, however, the exact reason why is unclear.

These attach to fat molecules, which make blood more likely to clot.

APS’ cause is unclear but is thought to include genetic, hormonal and environmental factors.

The number of sufferers in the UK and US is unclear, but three-to-five times more women have the condition than men.

There is no cure but anticoagulant medication or even just aspirin can reduce the risk of clots forming.

Most patients can live a normal life by taking these treatments.

These drugs also boost the chance a woman will have a healthy pregnancy by around 80 per cent.

Ms Burns suffers from antiphospholipid syndrome, which puts patients at a greater risk of blood clots and miscarriages.

She became pregnant with Ramaya four weeks after the funeral of her stillborn, Mia, in October 2017. She also lost her daughter, Casey, at 23 weeks in 2006.

Medics feared Ms Burns was in danger of suffering another miscarriage with Ramaya and recommended she have an abortion – but she refused.

They became concerned at 28 weeks when they noticed the baby was not moving as it should be. But it was not until Ms Burns was taken ill last May that they discovered the foetus’ heart rate had dropped.

‘I was at my mum’s and I just knew that something wasn’t quite right. I couldn’t bare the thought of losing another baby,’ Ms Burns said.

‘They told me her heart was stopping and I just started screaming “please save my baby”.

‘They told me that I had to have the baby now. I went down to surgery and I thought I’d wake up with no baby.’

Describing the pain of losing two children, Ms Burns said: ‘It’s the most awful thing I’ve ever been through in my whole life.

‘I had to give birth to a baby that had died. I was on a ward with all of the other mums and I could hear babies crying. I wanted to run away and never come back.

‘After I miscarried, I didn’t plan to have any more children but I went off the rails and struggled to cope with the grief. I found out I was pregnant five weeks later.’

The mother-and-daughter pair spent a total of 11 weeks in hospital, including three weeks in a high-dependency unit.

Ramaya was placed under constant surveillance to monitor her heart and underwent three blood transfusions after she was diagnosed as severely anaemic, which could otherwise have lead to heart failure. 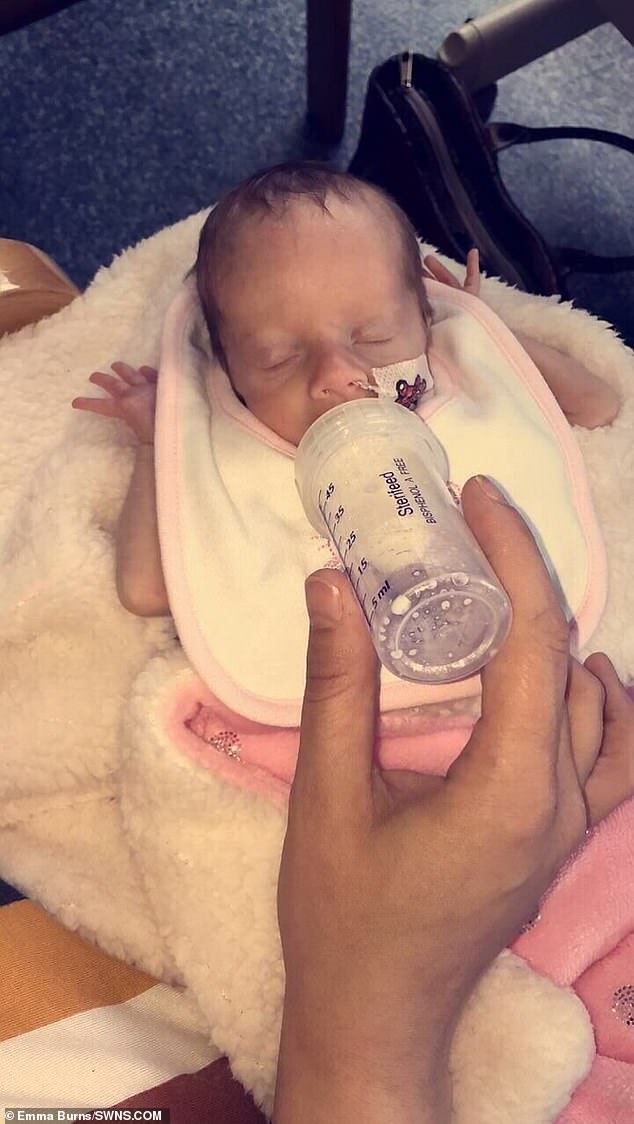 After defying expectations when she pulled through, Ramya has been called a ‘miracle’ 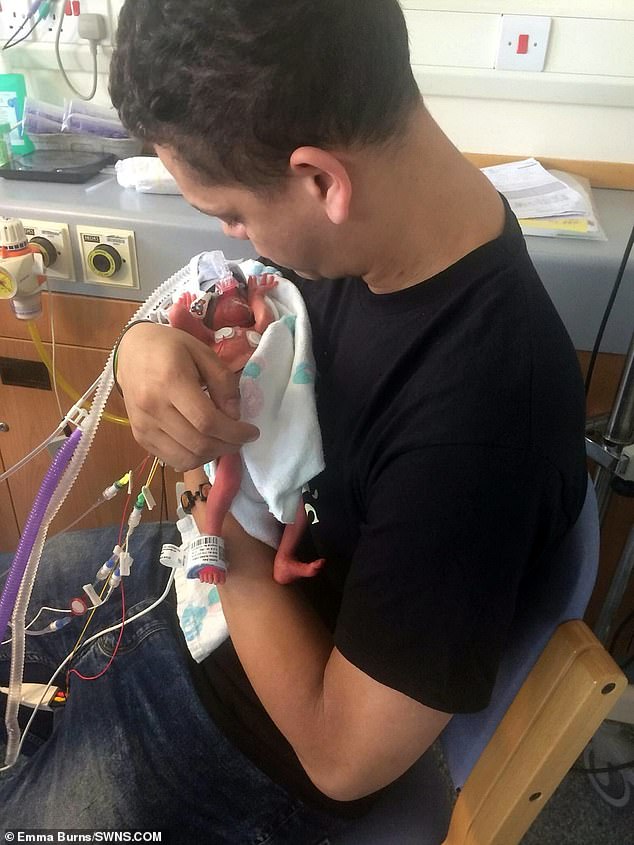 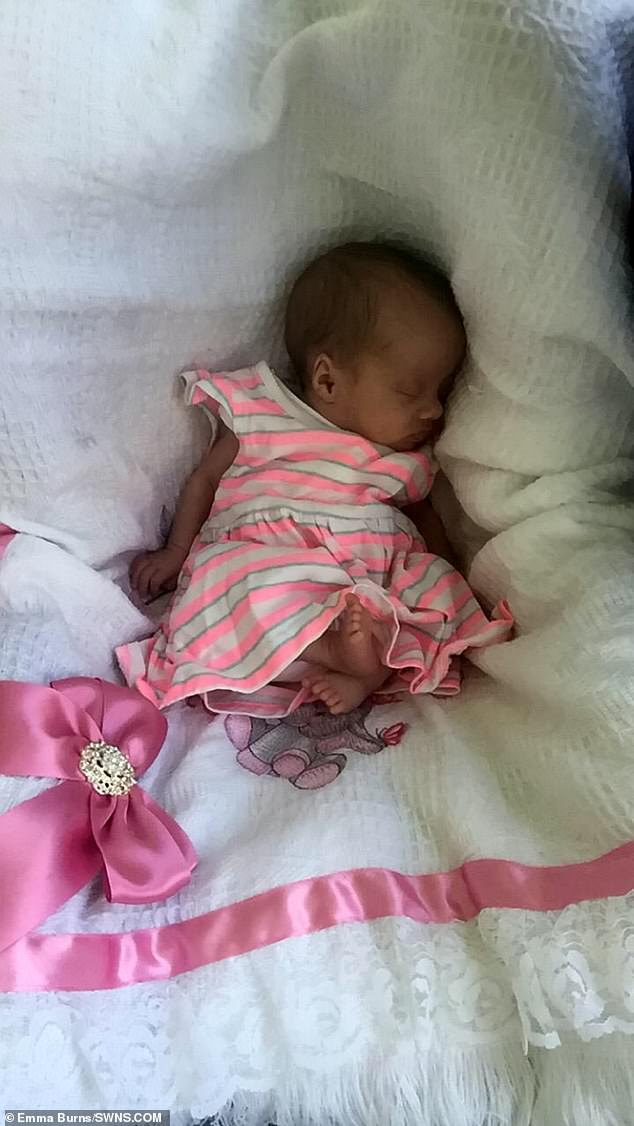