Mr Lear: A Life Of Art And Nonsense review

On one of his perpetual travels abroad, Edward Lear stopped at a village in Albania, next to a stream full of watercress, which he gathered and ate with bread and cheese.

The villagers thought of watercress as an inedible form of weed, and gathered round, to laugh at him. ‘Every portion I put into my mouth delighted them as the most charming exhibition of foreign whim,’ he recalled.

Youngsters began to gather new stuff for him to eat, the odder the better. ‘One brought a thistle, a second a collection of sticks and wood, a third some grass; a fourth presented me with a fat grasshopper – the whole scene was acted amid shouts of laughter, in which I joined in as loudly as any.’ 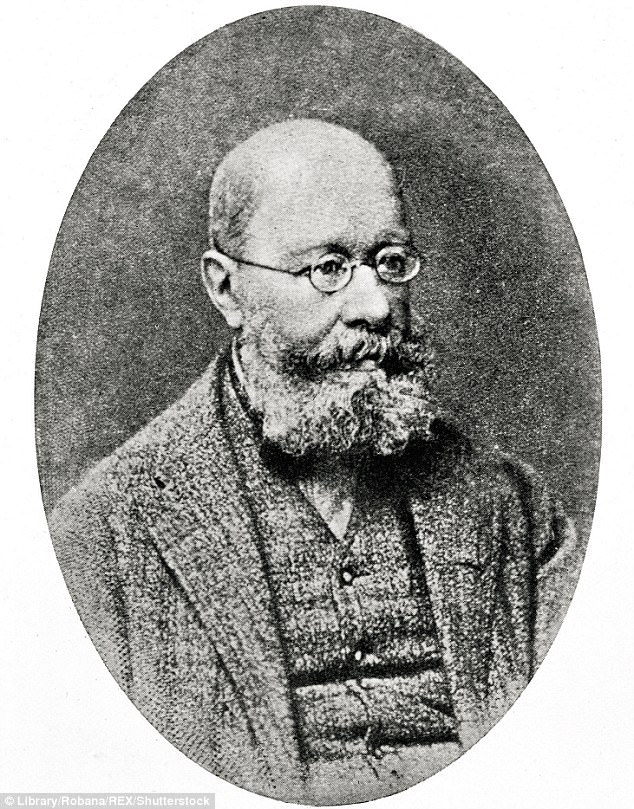 Has there ever been a writer or artist quite so loveable as Edward Lear, with his sense of fun, his friendliness and the way he liked to see the world refracted through the prism of nonsense

Has there ever been a writer or artist quite so loveable as Edward Lear? That little tale encapsulates much about his character: his sense of fun, his friendliness, his eccentricity, the way he liked to see the world refracted through the prism of nonsense.

On another occasion, in Greece, he had ridden for 15 hours on horseback across mountain paths before sitting down on what he took to be a bank, only to hear the grunt of a cow, which suddenly rose from under him and tilted him headlong into mud. Most of us would have been upset by such a fate, but not Lear, who immediately got to his feet and, according to his companion on the trip, burst into song:

‘There was an old man who said, “Now

I’ll sit down on the horns of that cow!”’

Unlike his down-in-the-dumps namesake, King Lear, Edward used his imagination to turn tragedy into comedy. For him they were, if you like, two sides of the same coin.

Born in 1812, he was the youngest of his mother’s 21 children, and the 13th to survive infancy. Aged five he was stricken with asthma and bronchitis; throughout his life he suffered from epilepsy, often enduring several fits a day.

As he put it in an autobiographical verse, this gave him ‘A consciousness of unknown things, of reason overthrown’. But in those days epilepsy was also a cause of shame, never to be admitted in public. Feeling a fit coming on, he would retreat into solitude, locking the door behind him. Even close friends, of whom he had many, had no idea how he suffered. ‘It is wonderful that these fits have never been discovered,’ he wrote in old age.

So his epilepsy set him apart. The sense of solitude was increased by his mother’s indifference to him, the bullying he suffered at school, and something unspeakable – possibly sexual abuse – that happened to him when he was ten. These days, publishers would no doubt badger him for a Misery Memoir, but Lear was made of stronger stuff, and spent a lifetime battling against self-pity.

‘The morbids are not allowed,’ he told himself. Instead, he used his genius to transform sadness into art, and by doing so changed the way we see the world.

‘Lear’s great poems and songs are not “about” his life – they float free,’ writes Jenny Uglow in this wonderfully sharp and sympathetic biography. ‘But their gaiety and sadness feel even keener when set against the tensions he saw and suffered.’

Thus her book is suffused with a sense of celebration, awe at the manner in which an ungainly man, who seemed destined to be a solitary misfit, somehow managed to alchemise the dark materials of his existence into gold.

‘He weeps by the side of the ocean

He weeps on the top of the hill;

He purchases pancakes and lotion,

And chocolate shrimps from the mill.

He reads, but he cannot speak, Spanish,

Ere the days of his pilgrimage vanish, –

How pleasant to know Mr Lear!’ 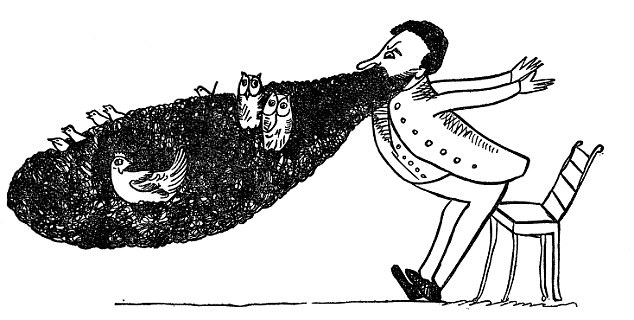 For me, Lear’s limericks – and the surreal cartoons, half-comical, half-scary, that accompany them – constitute his outstanding achievement. Above: There Was An Old Man With A Beard

His energy was boundless. He taught himself to draw, and by the age of 13 sold pictures to passengers waiting for coaches. Before long, he was teaching classes of smart girls barely younger than himself.

Though most of us know him best for his limericks and nonsense verse – The Owl And The Pussycat was recently voted Britain’s favourite poem – he was also a supremely gifted landscape painter, and his exact and vivid paintings of birds remain highly prized: he even has three particular types of bird named after him: a macaw, a cockatoo and a parakeet.

In his early 30s, he was summoned to the Isle of Wight to teach Queen Victoria how to paint. ‘He teaches remarkably well,’ she noted. Characteristically, Lear never boasted about his grand new role: instead, he told his friends only about his pratfalls.

‘Oh, how DID you get all these beautiful things?’ he once asked the Queen, as he peered at her display cases.

‘I inherited them, Mr Lear,’ came the reply.

As if all his other accomplishments were not enough, Lear was also a skilled musician, able to sing and play the piano, flute, guitar and accordion. Over the course of 30 years, he set Lord Tennyson’s poems to music, much to the poet’s satisfaction. 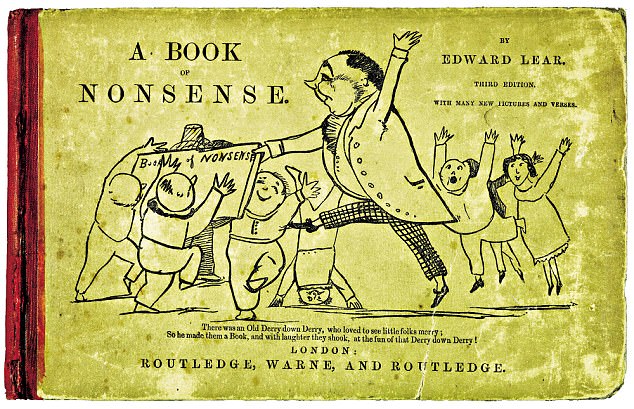 Under her benign gaze and beautiful prose, Lear emerges as a wholly original artist, as well as a heroic human being. Above: Lear’s A Book Of Nonsense

He was a friend to everyone: great Victorian figures such as writers Wilkie Collins, Samuel Palmer, Robert Browning and the Pre-Raphaelite painters all put their heads around the door in these pages. Holman Hunt called him ‘beyond doubt the most considerately kind and good-natured man alive’. On his travels around the world, he kept in touch with up to 400 different correspondents.

Towards the end of his life, he felt that everyone on Earth must have written to him at one time or another, ‘with a few exceptions perhaps, such as the prophet Ezekiel, Mary Queen of Scots and the Venerable Bede’.

I am lucky enough to own one of his letters, and I have it framed on my wall: it is an exuberant affair, full of delightful descriptions of his travels, all finished off with a comical drawing of Lear himself in a huge hat, ‘a turban resembling a dinner table’, astride a donkey.

Above all, it is for his limericks that Edward Lear is remembered. Some people simply don’t get the point of them, and find their repetition irritating. The New Zealand satirist John Clarke cruelly parodied them like this:

There was an old man with a beard.

A funny old man with a beard.

He had a big beard,

That amusing old man with a beard.

But, for me, they – and the surreal cartoons, half-comical, half-scary, that accompany them – constitute Lear’s outstanding achievement. In tandem, they create a crazy dream-world in which anyone and anything – the man from Skye who waltzes with a bluebottle fly, the woman from Norwich who lives on nothing but porridge – is possible.

More than 200 years since his birth, you can still spot his influence everywhere, from Beatles’ song lyrics to the poems of TS Eliot and John Ashbery, all the way to South Park and Family Guy.

Jenny Uglow’s publishers have really gone to town, creating a beautiful object, full of gorgeous colour illustrations, and peppering the text with Lear’s verse and drawings. Uglow herself is a perfect biographer, always alert to Lear’s artistry, and with amazing antennae for hidden messages.

She notices, for instance, that he never drew parents and children embracing, and that his nonsense characters are often struggling to change their lives. ‘They longed to escape but often failed: they set off, gave up and came back.’

And, unlike so many biographers, she never lets her analysis diminish the genius of her subject, or his many personal qualities. ‘Every time one returns to the limericks one can find something new: the gap between the characters, never quite touching, the action suspended in time; the darkness and anger.’

Under her benign gaze and beautiful prose, Lear emerges as a wholly original artist, as well as a heroic human being, who, as she says, ‘wanders hopefully, without hope, in a desperate refusal to despair’, not unlike The Dong With The Luminous Nose.