Job interviews are nerve-wracking at the best of times, but if you’re worried about committing some kind of blunder then this viral discussion is a masterclass in what not to do if you’re hoping to get the job.

People on British parenting forum Mumsnet have been discussing the most cringeworthy things candidates have done in job interviews – and it makes for toe-curling reading.

The conversation kicked off with the ‘horrifying’ story of a candidate who referred to people with learning disabilities as ‘mentals’ and said he wanted to work with them because he was ‘sure they’re not stupid’.

Meanwhile, one poster said a candidate they sat down with fell asleep halfway through the interview, while another described an applicant who lied about being able to speak fluent Mandarin being rumbled in the first 10 seconds.

What could possibly go wrong in a job interview? Well, plenty, according to a thread on Mumsnet 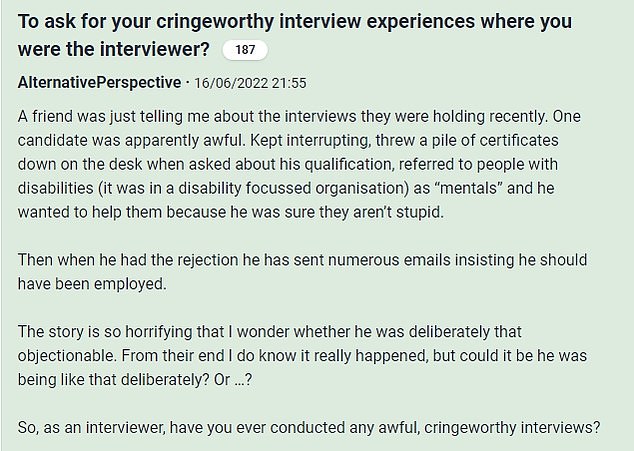 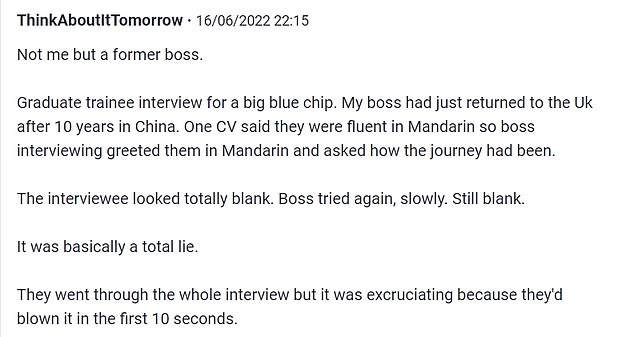 Rule one of applying for jobs – don’t lie on your CV, as you could get caught out in an embarrassing way, just like this candidate did

Kicking off the discussiong, a Mumsnet user described a disastrous job interview she’d been told about by a friend.

‘One candidate was apparently awful,’ she explained. ‘Kept interrupting, threw a pile of certificates down on the desk when asked about his qualification, referred to people with disabilities (it was in a disability focused organisation) as “mentals” and he wanted to help them because he was sure they aren’t stupid.

‘Then when he had the rejection he has sent numerous emails insisting he should have been employed.

The story is so horrifying that I wonder whether he was deliberately that objectionable. From their end I do know it really happened, but could it be he was being like that deliberately?

‘So, as an interviewer, have you ever conducted any awful, cringeworthy interviews?’

Since the pandemic hit, virtual interviews over Zoom have become more common, but they can be blighted by technical issues.

One poster recalled interviewing a woman whose camera was pointing directly at her chest, meaning they couldn’t see her face.

But in response, the candidate ‘snapped and said she couldn’t help that’ – which didn’t make a particularly good impression on her interviewer.

Another unusual Zoom encounter was described by someone who was interviewing a university graduate for a role.

They wrote: ‘I interviewed online for a while and had a young uni graduate (with incredible experience and grades) add her mum to the call.

‘I thought it was a mistake at first and declined before her mum connected and the candidate said, “Could you let my mum in? I told her she could join us”.’

The same person also interviewed a candidate whose camera was turned off and they claimed it was broken.

But at the end of the call, they accidentally pressed the wrong button which switched the camera on and revealed they were sitting in their dressing gown.

They wrote: ‘At the end of the interview she moves the camera up so we see her full face for the first and last time as she says goodbye.’

A cardinal rule when you’re applying for a new job is to be honest on your CV – something one candidate decided not to do with embarrassing consequences.

Relaying a story their boss had told them, one poster wrote: ‘My boss had just returned to the UK after 10 years in China.

‘One CV said they were fluent in Mandarin so [my] boss interviewing greeted them in Mandarin and asked how the journey had been.

When preparing for a job interview there is one question that fills many candidates with dread – to tell the interviewer an interesting fact about themselves.

Although it can be an awkward question to answer, most people have a fun fact up their sleeve in case the question arises – with the exception of one candidate someone posting on the thread interviewed.

After asking the candidate to share an interesting fact, they responded: ‘I’m not interesting at all. I’m actually really boring.’

Good manners and good preparation are key to succeeding in any interview, but some people still seem to forget these key rules. 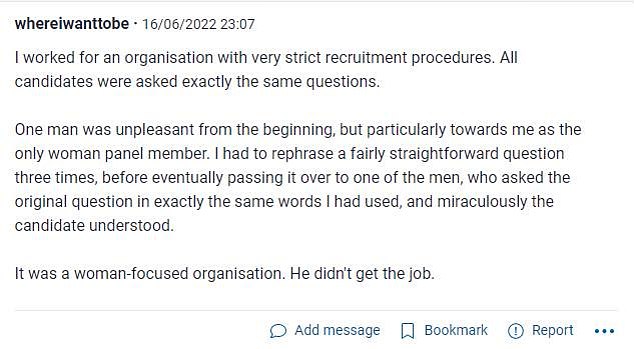 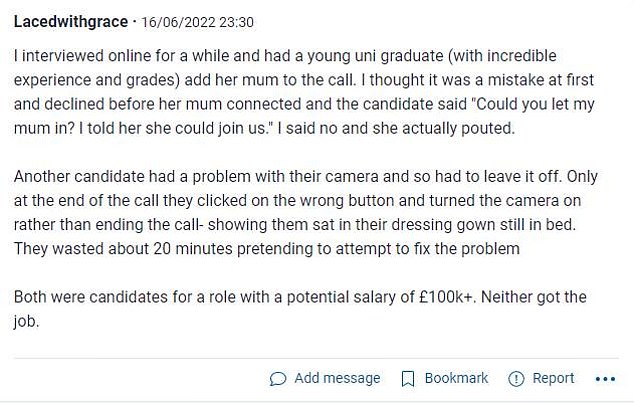 One poster said they once interviewed a candidate who thought she already had the role in the bag because she was friends with the person who was leaving.

They added: ‘At the end of the interview she said to my colleague, “My friend said you were nicer than you looked and she was right”!’

Another example of plain rudeness was when a candidate was asked if they had any questions for the panel of interviewers.

They reportedly asked: ‘How do you get your jobs? I’m sure I could easily be a manager in a year or two based on you guys.’

Perhaps to no one’s surprise, they didn’t get the job.

Despite living in the 21st century there are sadly still some men with chauvinistic attitudes walking among us, as one woman encountered when she interviewed a male candidate.

She posted: ‘One man was unpleasant from the beginning, but particularly towards me as a woman panel member.

‘I had to rephrase a fairly straightforward question three times, before eventually passing it over to one of the men who asked the original question in exactly the same words I had used, and miraculously the candidate understood.

‘It was a woman-focused organisation. He didn’t get the job.’

Some interview mishaps can be cringeworthy, and others can be downright bizarre, as one poster proved.

They wrote: ‘My boss interviewed someone who burst into song in the interview. This was for an admin job at the council.’

Although there was nothing theatrical about the role she was interviewing for, the candidate simply wanted to let the interviewer know how much she enjoyed singing.

Everyone understands that applying for jobs is stressful and at times, stress can get to the best of us.

However, if you possibly can, it’s best not to let it out in the middle of the interview, as one candidate apparently did.

A poster wrote: ‘I had an interviewee cry during an interview. She’d been made redundant after trying really hard to keep her department running.

‘Nothing but sympathy of course but no way did I consider her candidacy any further.’

However, one poster on the thread, who had been the interviewee in the cringeworthy situation, proved sometimes an embarrassing encounter isn’t the end of the world.

While saying goodbye to her interviewer, the candidate shook his hand and said: ‘Thanks so much, have a nice day, love you.’

The interviewer must have been flattered by the compliment – as they offered her the job.