Music festivals near open water could be ‘stressing out the fish’, study claims

Music festivals near lakes or bodies of water could be putting the aquatic life at risk due to the loud music stressing out the fish, a new study has found.

Researchers examined the impact the Ultra Music Festival, a dance music event in Miami, Florida, had on fish swimming in a nearby lagoon and on others in tanks.

The team from the University of Miami found that high volume music caused fish to become more stressed as it reminds them of the sound of approaching predators.

This year due to coronavirus lockdown measures, fish in lakes near events such as Latitude, Ultra and other waterside shows have been given a period of respite but the events are due to return to normal from 2021.

For the study researchers analysed how toadfish reacted to the increased sounds of the three-day Ultra Music Festival – studying fish in tanks and a nearby lagoon.

This year due to coronavirus lockdown measures, fish in lakes near events such as Latitude (a performance on the lake pictured), Ultra and other waterside shows have been given a period of respite but the events are due to return to normal from 2021 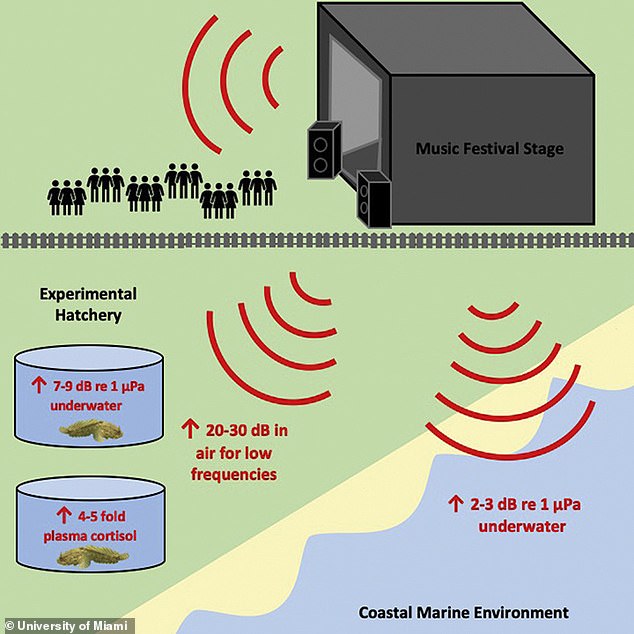 Researchers examined the impact the Ultra Music Festival, a dance music event in Miami, Florida, had on fish swimming in a nearby lagoon and on others in tanks

The electronic music festival, held at the Miami Marine Stadium and Virginia Key Beach Park, from March 29 to 31, 2019, attracted over 170,000 revellers.

The team discovered that when the toadfish heard loud music it caused a stress hormone to be released, similar to when they heard predators nearby.

A ‘significant stress response’ was found in the fish on the first day of the festival when there were elevated noise levels, scientists said.

The researchers’ findings showed that the toadfish had a four to five-fold increase in blood cortisol – their main stress hormone – during the first night of Ultra, compared to two baseline samples taken before the festival began.

As well as testing cortisol levels, the scientists put recording devices around the festival site to measure sound intensity in the air and underwater.

Hydrophones were placed in the toadfish tanks and in the waters directly next to the Ultra stages in Bear Cut Inlet in the Historic Virginia Key Beach Park.

They were also put in Lamar Lake – a shallow mangrove lagoon further north.

Danielle McDonald, professor of marine biology and ecology at the UM Rosenstiel School and the study’s co-investigator, said the stress responses were similar to what toadfish would experience when hearing bottlenose dolphins.

These dolphins are one of the main  toadfish predators, explained McDonald.

This can happen on communication, hearing, spawning behavior and reproduction in aquatic organisms’, said Maria Cartolano, lead postdoctoral scientist on the study.

Gulf toadfish play an important ecological role in the local marine environment around the site of the Ultra Music Festival, the authors wrote.

This species rely heavily on sound and their hearing for reproduction, social interactions and avoiding prey, scientists said.

Claire Paris, professor of ocean sciences at the UM Rosenstiel School and co-investigator, said sound intensity increased by 7-9 decibels in the Toadfish tank. 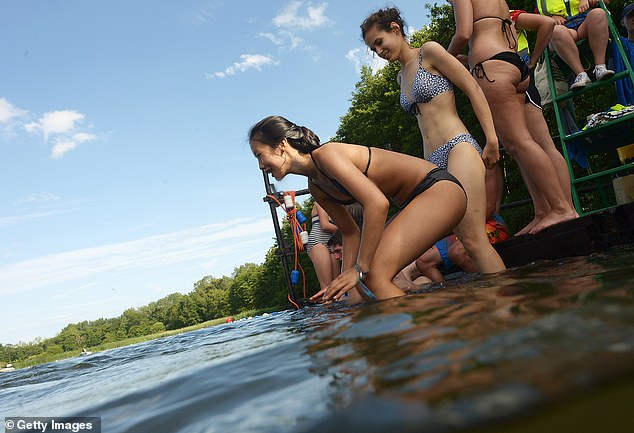 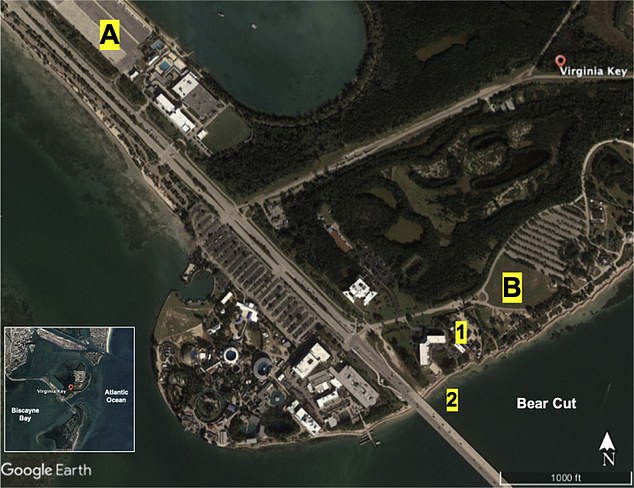 It increased by slightly less – 2-3 decibels – in nearby waters but it was in the low frequency range where fish are most sensitive to changes in sound pressure.

‘Variations in the sonic activity of marine organisms and additional noise from boat traffic may have contributed to the signal detected in Bear Cut during Ultra.

‘In situ measurements, including long term acoustic recording, are necessary to evaluate the effect of Ultra on wild fish populations,’ said Paris.

This study could not determine if the raised cortisol levels will have any long-term effects on the fish, the authors said, as it was isolated to that one year.

Martin Grosell, professor of marine biology and ecology and Maytag Chair of Ichthyology at the UM Rosenstiel School, said was also involved in the study.

”We conducted the study on the effects of the multi-day music concert due to the close proximity of the festival to our experimental hatchery and aquaculture facility.

‘It provided us an opportunity to investigate the potential impacts a large music festival of this kind can have on fish,’ said Grosell.

The study was published in the Journal Environmental Pollution.