A senior cleric at an influential Islamic seminary in northern India has issued a fatwa against Muslim women watching football because they will be distracted by the players’ bare thighs.

Mufti Athar Kasmi said that watching men ‘playing with bare knees’ violated the tenets of Islam and was forbidden for women.

Kasmi is a cleric at Darul Uloom, Asia’s largest Sunni Muslim seminary in the northern town of Deoband.

The cleric also lashed out at men who allow their wives to watch football, even on television.

‘Do you have no shame? Do you not fear God? You let her watch these kinds of things,’ he said in his sermon on Friday.

‘Why do women need to watch these football matches? What they will gain by looking at footballer’s thighs? Their attention will be on that only and they will even miss the scores,’ Kasmi said.

On Tuesday, a Muslim women’s rights activist in the northern city of Lucknow decried the decree. 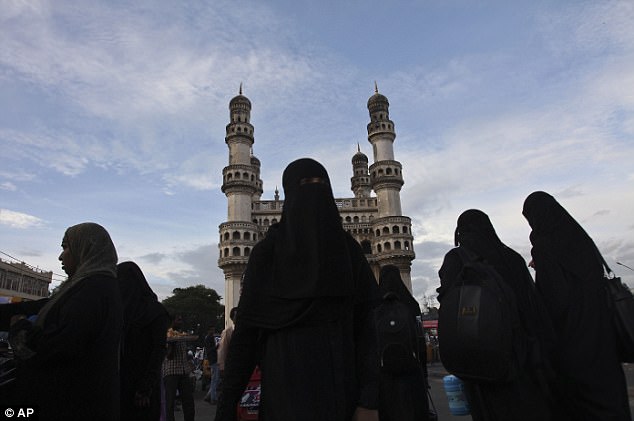 A Muslim women’s rights activist in the northern city of Lucknow decried the decree. Pictured, Indian Muslim women walk in front of the Charminar monument in Hyderabad

‘It implies that Muslim women should not watch any athletic event, tennis matches or swimming championships,’ Sahira Nasih said.

‘How it can be immoral for a woman to watch men playing sport?’

The seminary’s rigid interpretation of Islam is the ideological foundation for many hard-line religious groups, including the Taliban movement in Afghanistan.

In the past, it has issued decrees banning Muslim from tweezing or trimming their eyebrows, branding it ‘un-Islamic.’

About 13 percent of India’s 1.3 billion people are Muslim and the majority of them are Sunni, but the country’s secular constitution ensures that decrees such as Kasmi’s have no legal force.