Cabinet minister Nadhim Zahawi has revealed that his Covid jabs prevented him from potentially dying from the virus after he was struck down last week.

The Education Secretary said medics had told him he could have ended up in hospital on a ventilator if he had not had three vaccines, after he suffered breathing problems.

In a lengthy question and answer session with Sky News today he told presenter Kay Burley: ‘I think, without the vaccine and the booster, I’d have had it even worse, my doctor said, because it’s your physiology.’

Asked if he could have died, he said: ‘Certainly I would have been in big trouble, according to my doctor.’

The Education Secretary said medics had told him he could have ended up in hospital on a ventilator if he had not had three vaccines, after he suffered breathing problems.

‘It’s your body’s reaction to Covid that will determine how severe or asymptomatic you might be,’ he said, adding that some of his family members had had ‘no symptoms whatsoever’.

‘By day four or five it got into my chest and started really affecting my breathing,’ he said, adding that his temperature reached 39.5C and his doctor had suggested he might have to be put on steroids.

He said his doctor told him: ‘If you hadn’t had the vaccine and the booster, I guarantee you you would be in hospital and probably intubated.’

And he urged viewers: ‘Get your vaccine and get your booster… the offer is evergreen from the NHS.

Mr Zahawi said the Government will be led by the data when it comes to ending the need to self-isolate.

He said Prime Minister Boris Johnson will set out plans for ‘living with Covid’ on February 21, and if the data continues in ‘the direction it’s moving in at the moment’ restrictions could be lifted on February 24.

Mr Johnson today came under fire for announcing that he intends to ditch all remaining Covid laws within a fortnight as unions criticised the move as going ‘too far, too soon’ and the Government’s own advisers warned of the ‘dangers’.

The Prime Minister yesterday dramatically declared the final domestic restrictions – including compulsory self-isolation for the infected – will be axed before the end of February, provided the ‘encouraging’ trends in the data continue.

Covid infections are falling consistently and deaths are in freefall, while the milder nature of Omicron, coupled with sky-high levels of immunity, mean the NHS never came under the levels of pressure that No10’s experts feared would happen.

Ministers have repeatedly spoken of their plans to live with Covid like flu, paving the way for England to lead the rest of the world out of the pandemic phase. 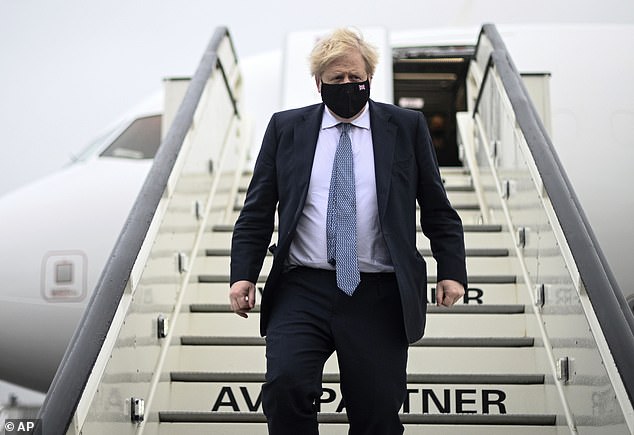 The current self-isolation rules in England expire on March 24, but the Tory leader told MPs at Prime Minister’s Questions that ‘provided the current encouraging trends in the data continue, it is my expectation that we will be able to end the last domestic restrictions — including the legal requirement to self-isolate if you test positive — a full month early’ 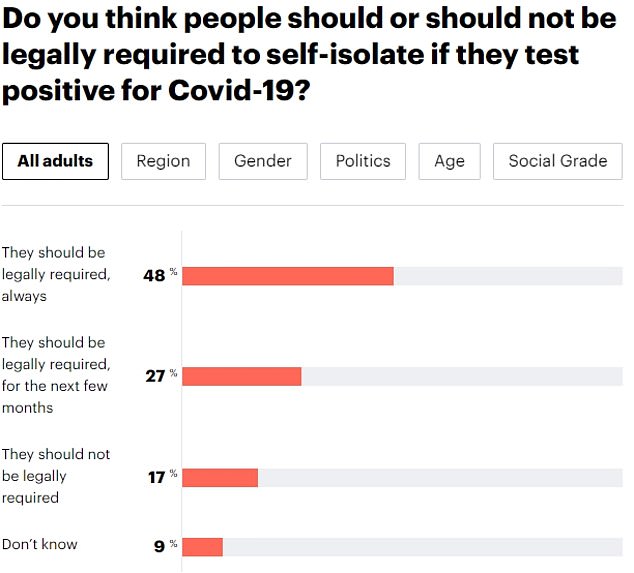 A YouGov poll of nearly 5,000 Britons shows 75 per cent of people believe the self-isolation requirement should be in place for at least the next few months

But the statement from the embattled PM yesterday – greeted with roars by Tory MPs in the Commons – was labelled as an ‘attempt to distract’ from the partygate scandal.

Scottish Health Secretary Humza Yousaf said it ‘wasn’t a thought-out policy backed up by public health expert advice’, adding: ‘It was a dead cat thrown on the despatch box of the House of Commons in order to distract and deflect.’

Epidemiologist Professor Tim Spector warned relaxing Covid curbs is a ‘political type of statement rather than a scientific one’. And Professor Devi Sridhar, a public health expert at Edinburgh University, argued plans to revoke the rules is clearly intended to ‘create headlines’ and ‘distract from the problems that the PM is facing which is that he seems to have broken lockdown rules’.

Christina McAnea, Unisons’s general secretary, said: ‘Everybody wants to get back to normal, but Covid risks haven’t disappeared. ​This is going too far, ​way too soon.

‘Infections are still rife in schools​. Large numbers of pupils ​and staff are off​. Allowing ​a ​premature return could lead to a further jump in infections and disrupt learning for thousands more ​children and young people.’

He said: ‘This restriction is the last one and quite rightly so.

‘If you think about what it does, it targets those who are actually infectious with the virus and asks them to stay at home.’