NASA fires up engines of its SLS megarocket

The SLS, currently being built, is intended to send humans to ‘deep-space’ destinations such as Mars and the moon; it could send humans to Mars in the 2030s.

NASA released this photo of the SLS engine being tested in Mississippi on February 1. The space agency tested the Space Launch System (SLS) engine yesterday at Stennis Space Center near Bay St. Louis, Mississippi, for the second time this year

Two weeks ago a 3D printed ‘shock absorber,’ intended to give astronauts a smoother ride, was tested during a 365-second event also at Stennis Space Center.

Following that test the part was cleared to be installed on an engine for use by NASA’s SLS, a rocket designed to be the most powerful on the planet.

The rocket, set to take it’s maiden flight in 2019, will eventually carry humans on the Orion spacecraft.

Over the next year, engineers plan to add additional 3D printed parts to the RS-25 engine to reduce waste and costs associated with the SLS. 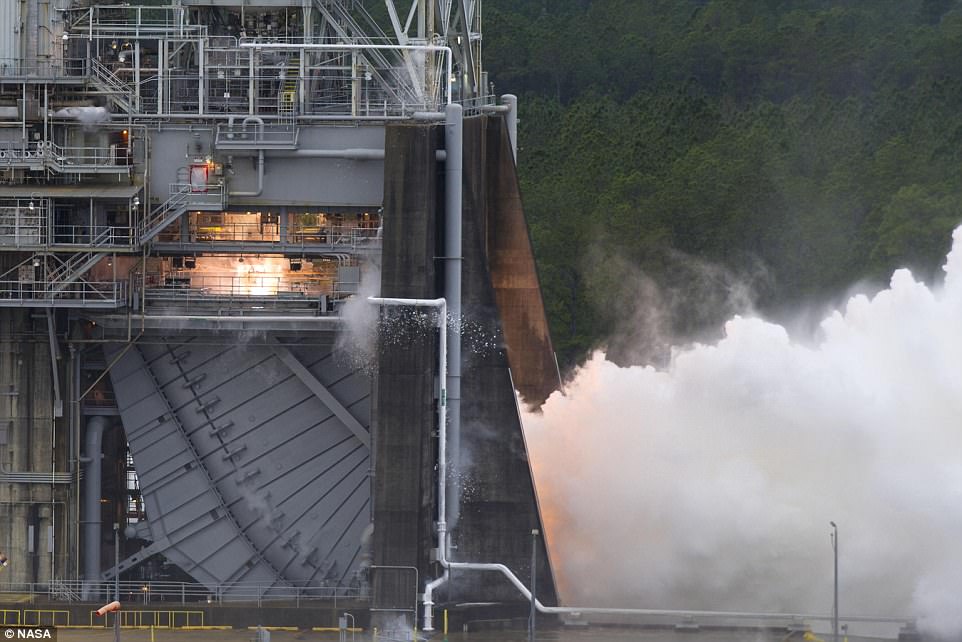 Another test of its RS-25 engine flight controller (pictured) at Stennis Space Center near Bay St. Louis, Mississippi, was carried out two weeks ago. A 3D printed part of the engine that was first tested in December was tested during the 365-second test. Once the flight controller is certified, it will be installed on an engine for use by NASA’s Space Launch System (SLS)

WHAT IS NASA’S EM-1 MISSION?

The uncrewed Orion will travel into Distant Retrograde Orbit, breaking the distance record reached by the most remote Apollo spacecraft, and then 30,000 miles farther out (275,000 total miles).

The mission will last 22 days and was designed to test system readiness for future crewed operations.

The full duration test earlier this month came a month after NASA capped a year of RS-25 testing with a flight controller test in mid-December.

‘We ended 2017 with a successful engine test in December and have now maintained that momentum into 2018,’ said Dan Adamski, RS-25 program director at Aerojet Rocketdyne, who collaborated with NASA on the test.

‘Future testing this year will continue to add to the program’s inventory of flight controllers and will bring additional development hardware into the test program to demonstrate design, manufacturing and affordability improvements.’

The 3D printed engine component, called a pogo accumulator assembly, was part of an ongoing series of test on parts made using advanced manufacturing techniques that will make building future engines more affordable.

Aerojet Rocketdyne engineers told Fox News that the shock absorber component was printed using a laser and metal powder, with a machine that builds the part in two halves in weeks, compared to hand construction which can take years.

‘As you’re driving along a cobble stone road you have dampeners in your car that make it a nice smooth ride and that’s what were doing for astronauts,’ said Alan Fung, one of the lead mechanical design engineers on the project.

‘When the astronauts are riding up into space they’ll feel this vibration that kind of feels like jumping on a pogo stick.

‘That’s where the name comes from.

‘While the astronauts are feeling that, it’s causing a lot of problems for the engine so we don’t want that effect,’ he said.

The test was for the engine controller that will be used on the third engine of the second planned flight of the SLS (EM-2), which is set to carry astronauts. 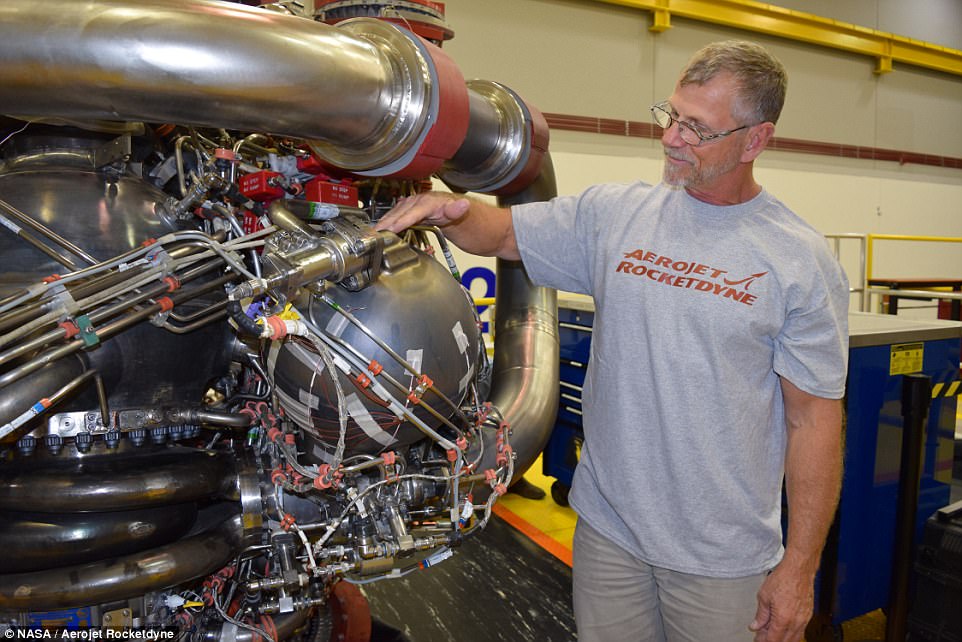 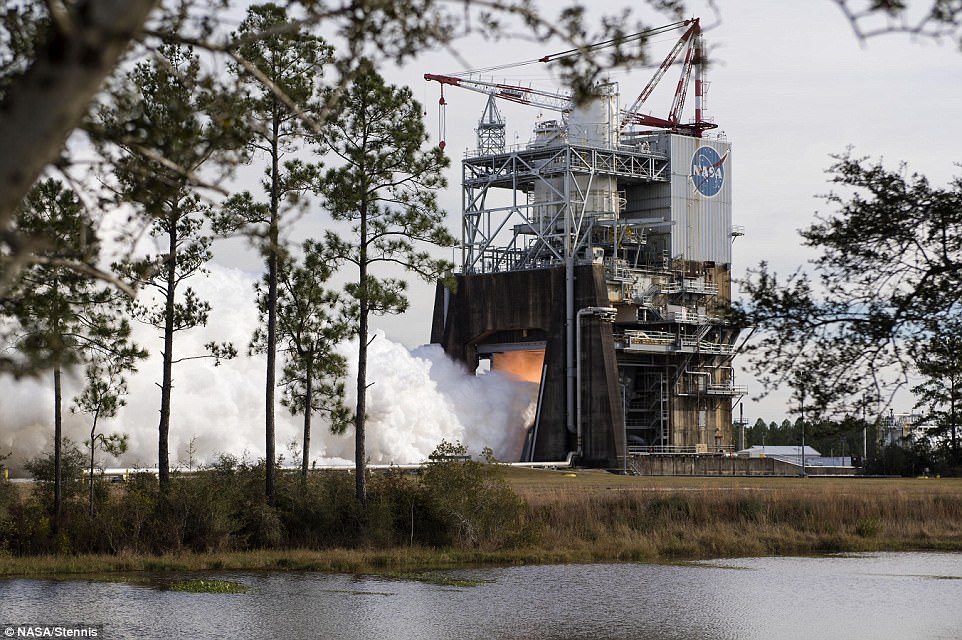 Pictured is the final 2017 test of the RS-25 rocket engine at NASA’s Stennis Space Center on December 13. Once the flight controller is certified, it will be installed on an engine for use by NASA’s Space Launch System (SLS), a rocket set to take it’s maiden uncrewed flight in 2019. It will carry humans on the Orion spacecraft and enable missions to the Moon and Mars 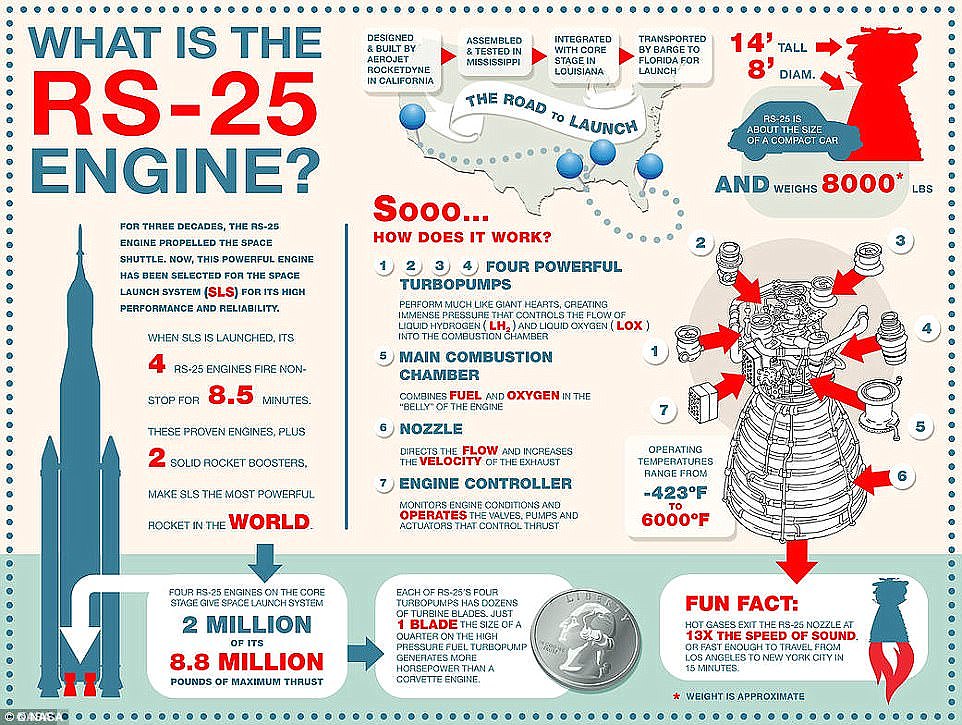 The RS-25 engine will eventually be fitted to a new NASA rocket called the Space Launch System (SLS), which will be used to launch the Orion spacecraft in 2019

RS-25 engines for the initial SLS flights will be former space shuttle main engines, modified to provide the initial power needed by the larger SLS rocket.

According to NASA, a key part of that modification is the new flight controller, which works as the RS-25 ‘brain,’ helping the engine communicate with the SLS rocket and providing precision control of engine operation and internal health diagnostics. 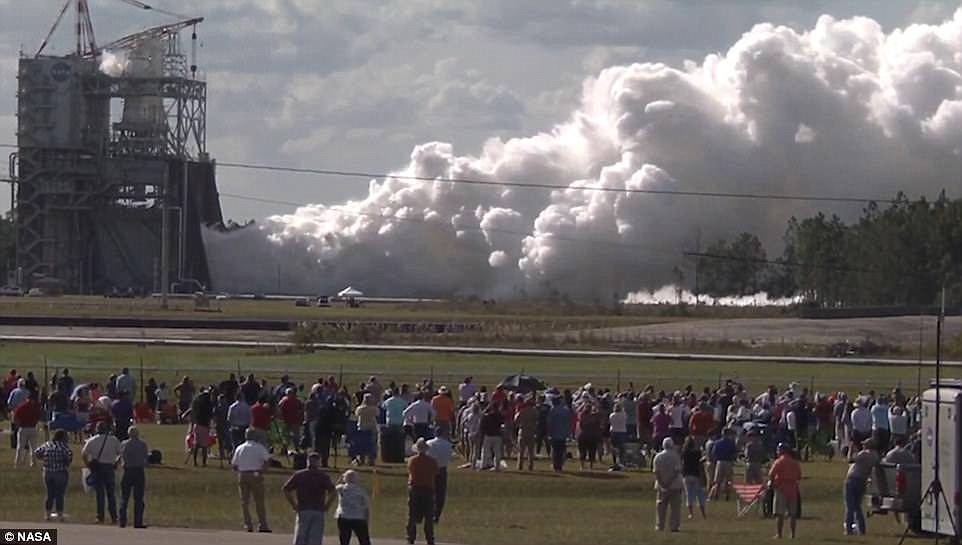 This successful hot-fire test of an RS-25 development engine at NASA’s Stennis Space Center on December 13 included NASA’s largest 3D printed rocket engine component to date, the pogo accumulator assembly. The test was the first of 50 for NASA’s restart of RS-25 engine production 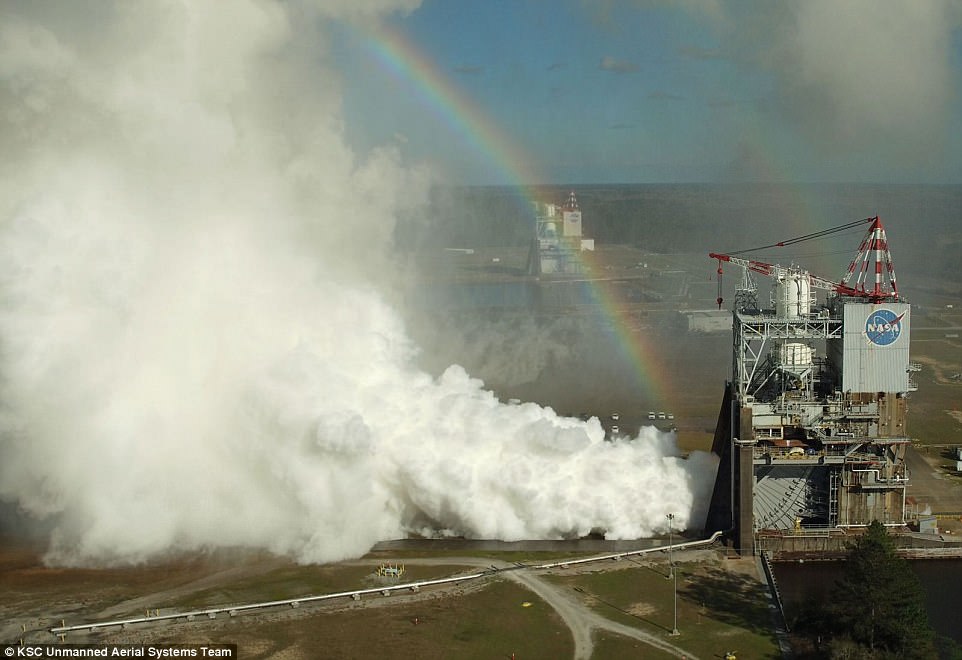 An image of a previous RS-25 test conducted on February 22, 2017, reveals a stunning rainbow above the Stennis Space Center near Bay St. Louis, Mississippi

NASA is testing all RS-25 engines and flight controllers for SLS mission at Stennis Space Center.

The initial SLS Exploration Mission-1 (EM-1) will serve as the first test flight for the new rocket, and will carry an uncrewed Orion spacecraft.

The engines for this flight have already been tested at Stennis and are ready to be attached to the rocket’s core stage being built at NASA’s Michoud Assembly Center in New Orleans.

The current engine tests are for controllers for Exploration Mission-2, the first flight that will transport astronauts on board Orion.

As well as testing those engines, NASA is preparing the B-2 Test Stand at Stennis to test the entire SLS core stage with its four engines for EM-1. 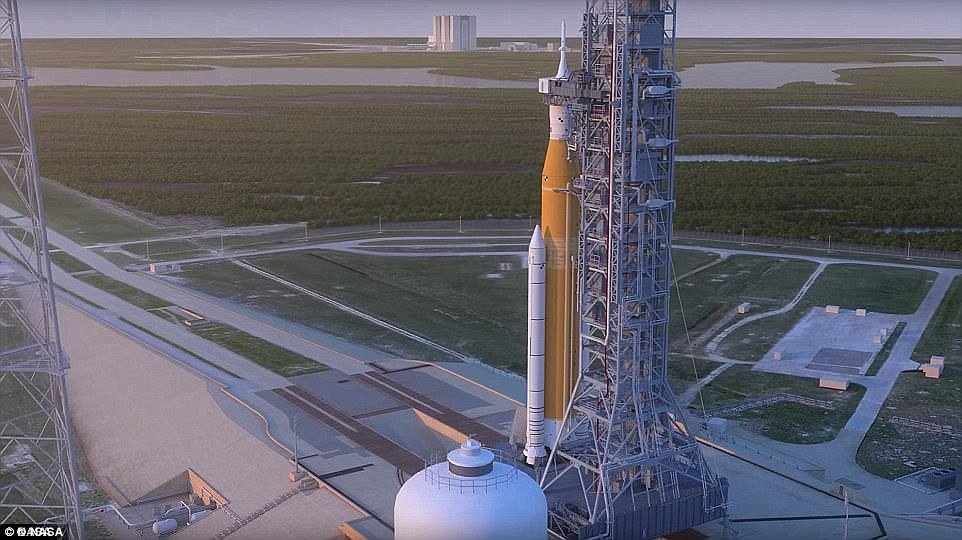 NASA has revealed a breathtaking glimpse at what th eSpace Launch System (SLS) megarocket could look like when it finally blasts off for its first mission in 2019. NASA has released a stunning animation simulating the take-off of the SLS – a rocket set to be the most powerful in the world

This ‘green run’ testing required installing the flight core stage on the B-2 stand and firing all four RS-25 engines simultaneously, as in an actual launch.

The RS-25 tests at Stennis are conducted by a team of NASA, Aerojet Rocketdyne and Syncom Space Services engineers.

Aerojet Rocketdyne is the RS-25 primary contractor, and Syncom Space Services is the prime contractor for the Stennis Center’s facilities and operations. 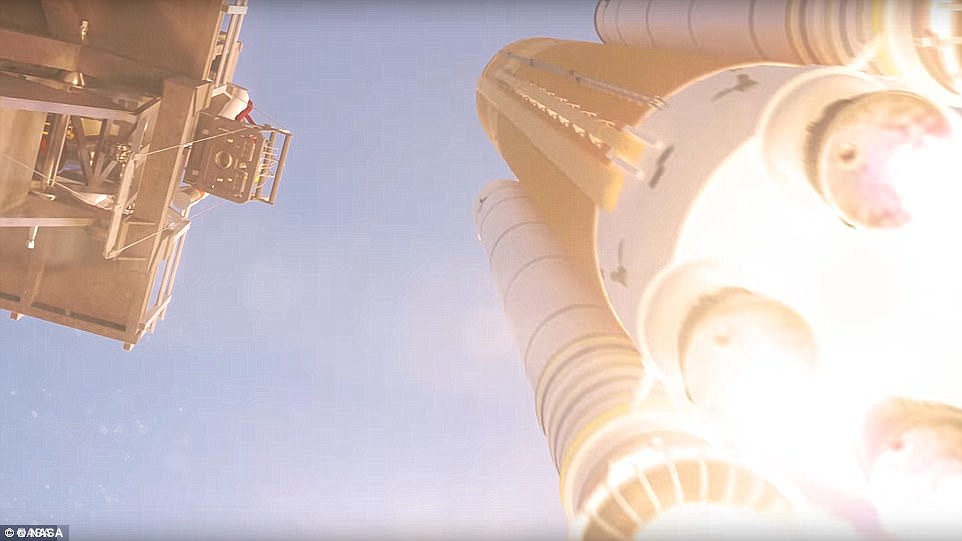 In an animation video, the massive SLS rocket can be seen firing up its engines in plume of smoke, before lifting off and breaking through the clouds, climbing toward the depths of space 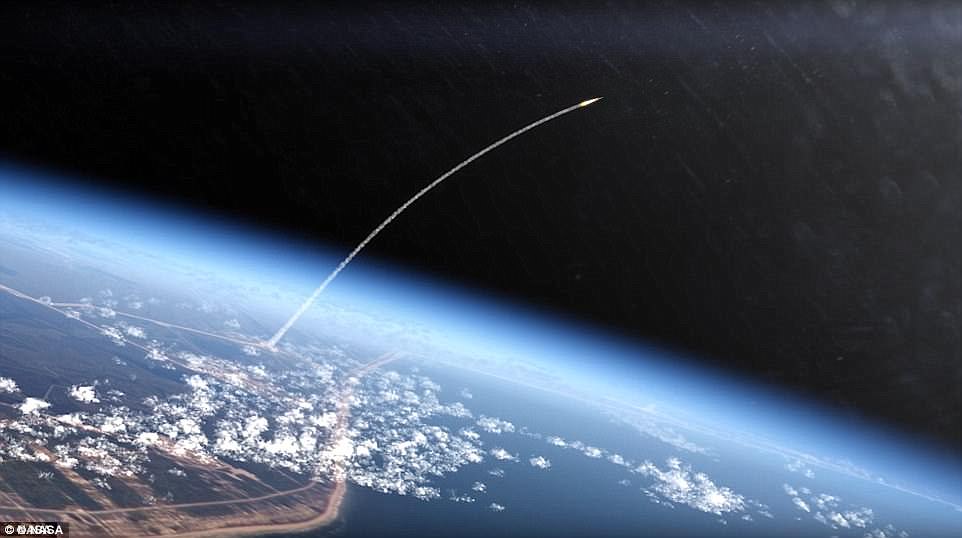 NASA’s SLS rocket will carry out its maiden launch in 2019 for an unmanned mission – then, in the 2030s, it could carry astronauts to Mars