EXCLUSIVE The vanishing: National Geographic’s October issue puts the world’s most vulnerable animals on display in a series of powerful and adorable animal portraits

For the last 25 years, Joel Satore has risked life and limb trying to get the perfect shot as a wildlife photographer for National Geographic. In 2005, he decided to begin ‘The Photo Ark,’ a ground-breaking effort to document endangered animals that are living in zoos and wildlife sanctuaries around the word.

The result is an astonishing array of studio portraits that expose the raw beauty and vulnerability of animals outside their habitat. ‘Black and white backgrounds level the playing field, making a mouse every bit as grand as an elephant. In these portraits, they are equals,’ said Satore.

Satore estimates that 12,000 different animal species exist in captivity around the world and thus far, 9,754 have been photographed in over 32,000 frames for The Photo Ark. A stunning selection of these images are featured in the October 2019 issue of National Geographic and recently released photo book titled The Photo Ark Vanishing: The World’s Most Vulnerable Animals.

Below is a small sample of the powerful, humbling and adorable images that are featured in The Photo Ark, for more on this story, visit National Geographic. 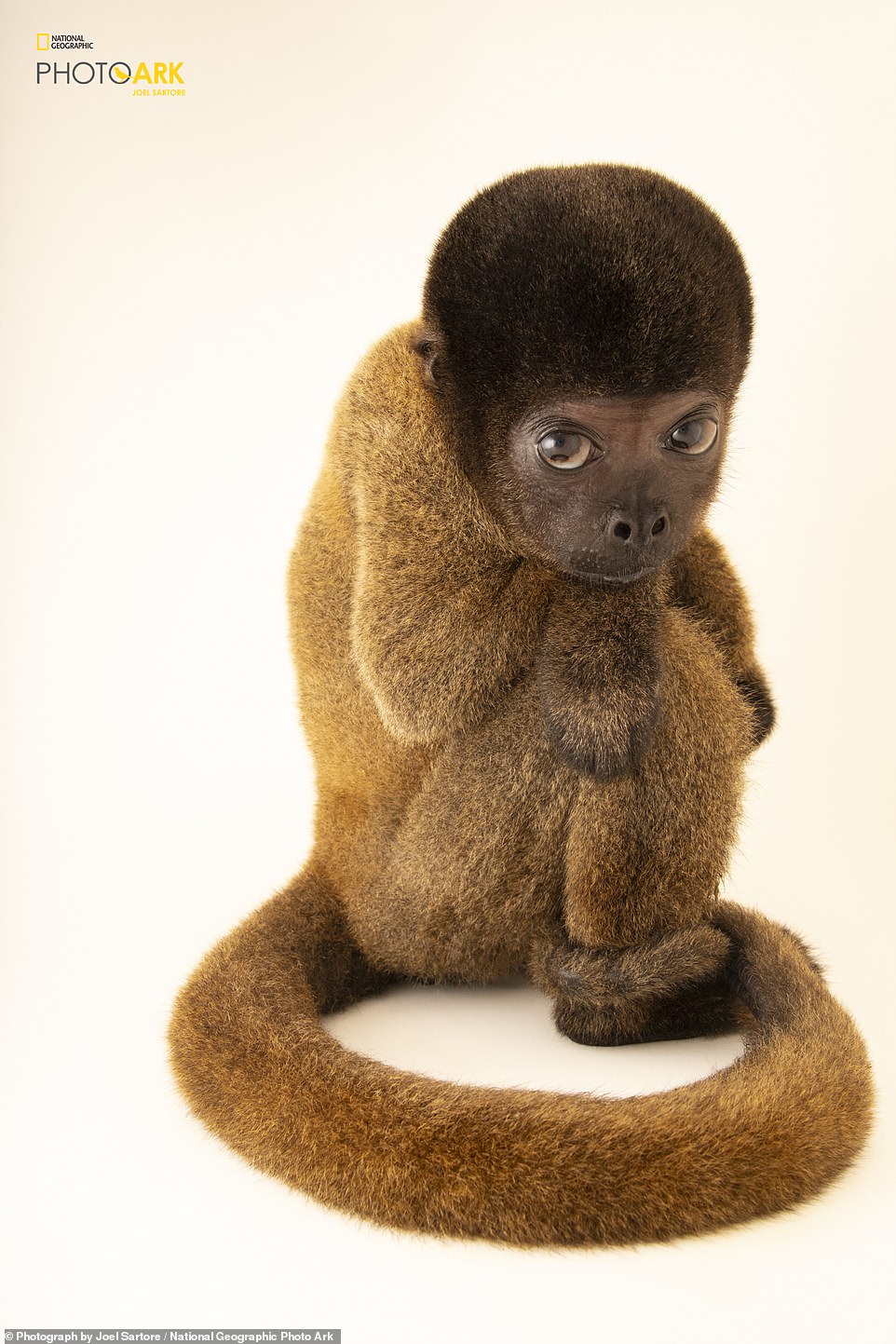 Gray woolly monkey (Lagothrix cana) photographed at the Cetas-Ibama, Brazil. This young, malnourished woolly monkey from Brazil was raised as a pet. When she was captured, her mother likely was killed. Environmental police rescued her, and she’s been treated, but she’ll need to remain in captivity the rest of her life 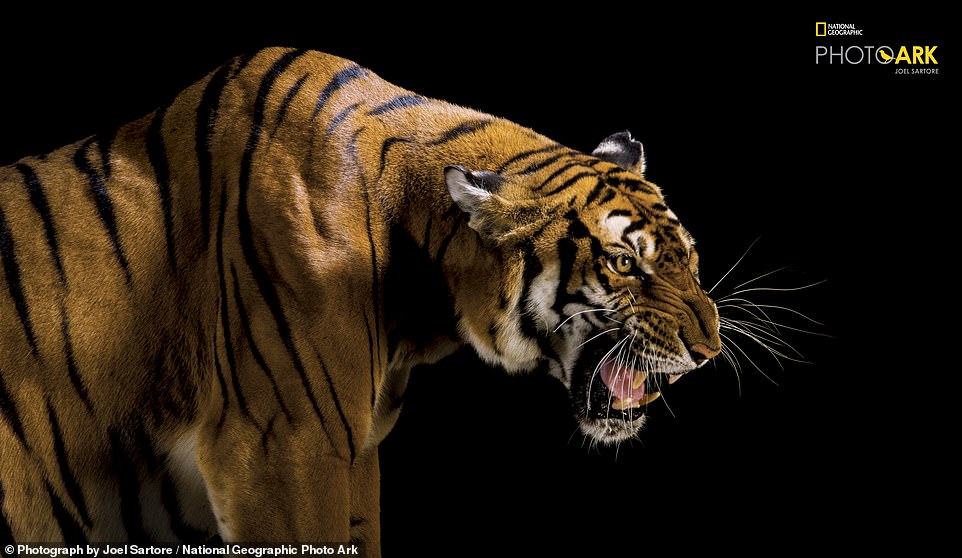 No trace of the wild South China tiger (Panthera tigris amoyensis) has been seen for more than a decade. Zoos hold fewer than 200 in breeding programs. If a Chinese plan to return some to the wild fails, they could become the fourth subspecies of tiger to go extinct. Satore photographed this tiger at the Suzhou South China Tiger Breeding Base 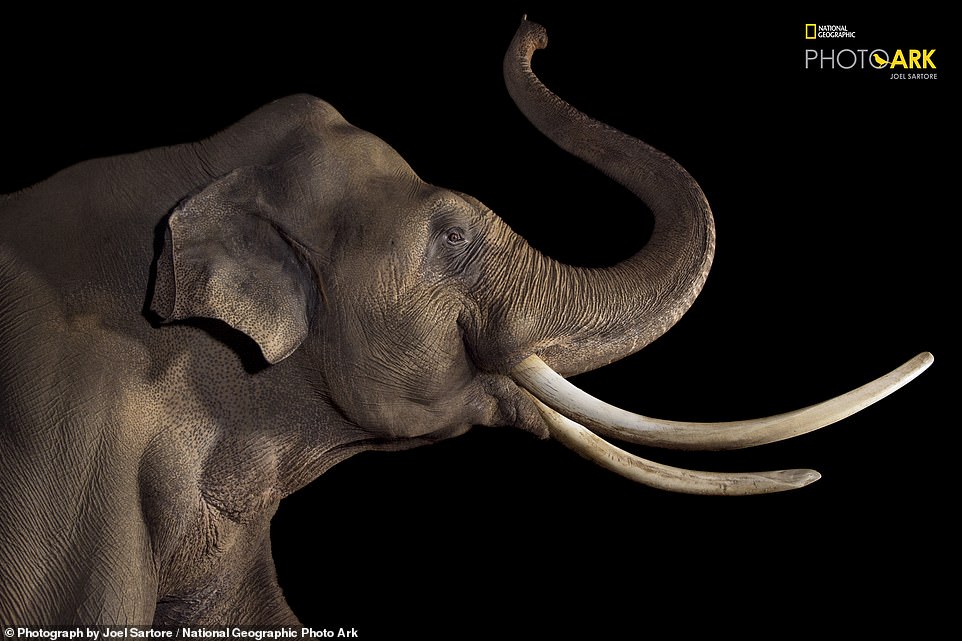 Above is an Asian elephant (Elephas maximus) from the Los Angeles Zoo. Early in the 20th century, perhaps 100,000 elephants roamed across Asia. Since then, their population likely has been cut in half. They’re killed not just for their ivory tusks but also for their meat and hides-and sometimes in retaliation for the damage they do to crops 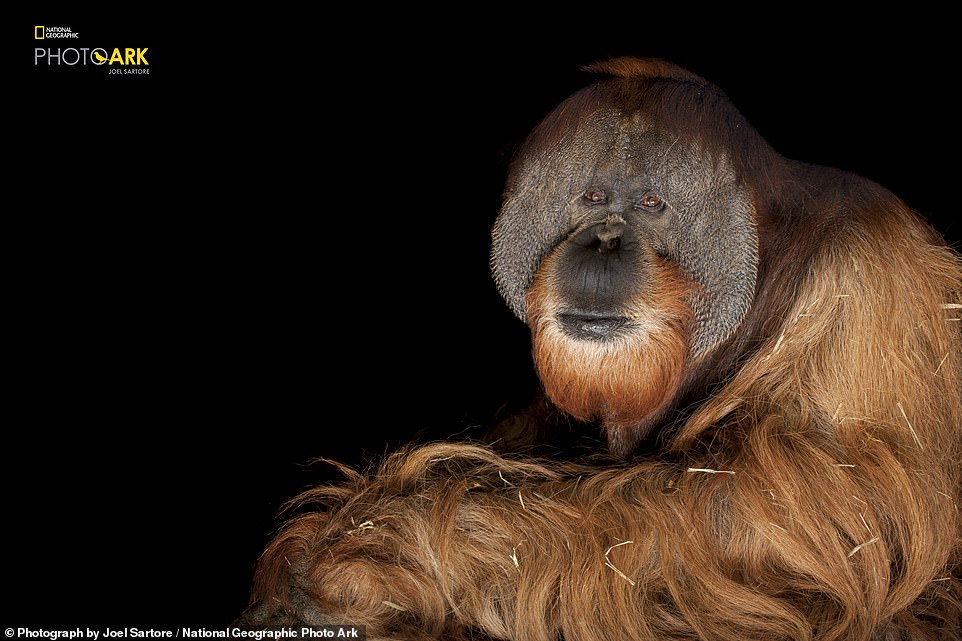 Sumatran orangutan (Pongo abelii) from the Rolling Hills Zoo in Kansas. Habitat loss-driven primarily by human expansion as we develop land for housing, agriculture, and commerce-is the biggest threat facing most animal species, followed by hunting and fishing. Even when habitat is not lost entirely, it may be changed so much that animals cannot adapt 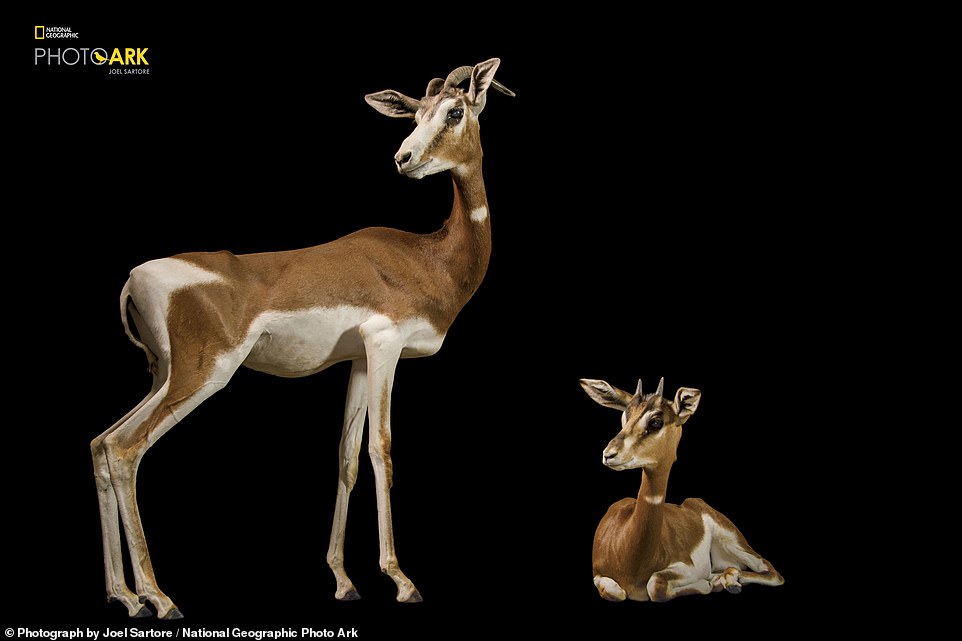 Mhorr gazelle (Nanger dama mhorr) pictured above at the Budapest Zoo is a subspecies of the dama gazelle was once widespread across the western Sahara. Now there are fewer than 300 damas combined in Mali, Chad, and Niger. Their range is broken up by grazing lands for livestock, and they’re at risk from hunting. Reintroduction of captive-bred animals has had mixed success 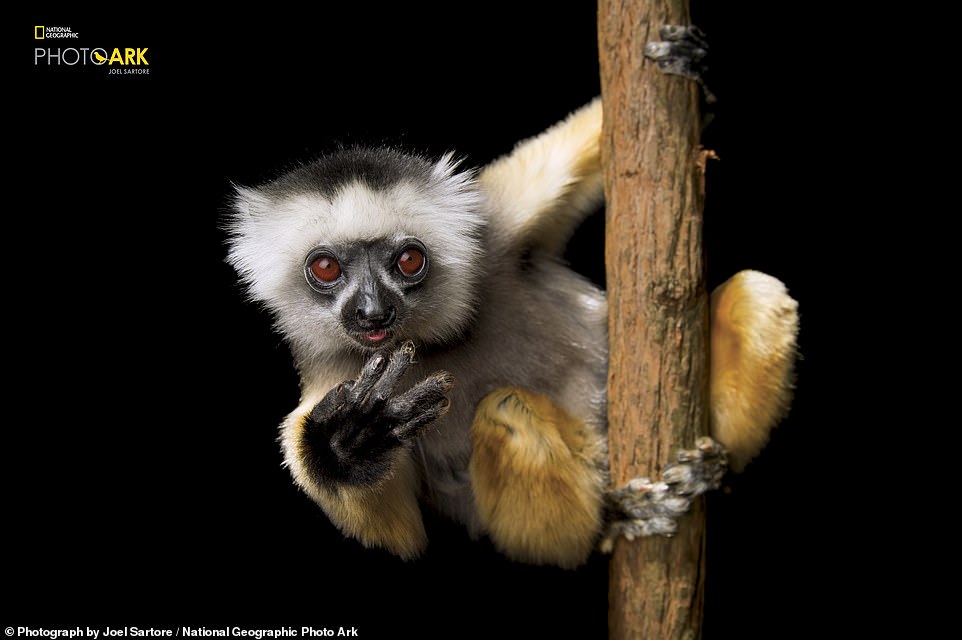 Diademed sifaka (Propithecus diadema) at Lemur Island in Madagascar. Females may only be fertile one day a year, limiting this lemur’s ability to rebuild fragmented populations 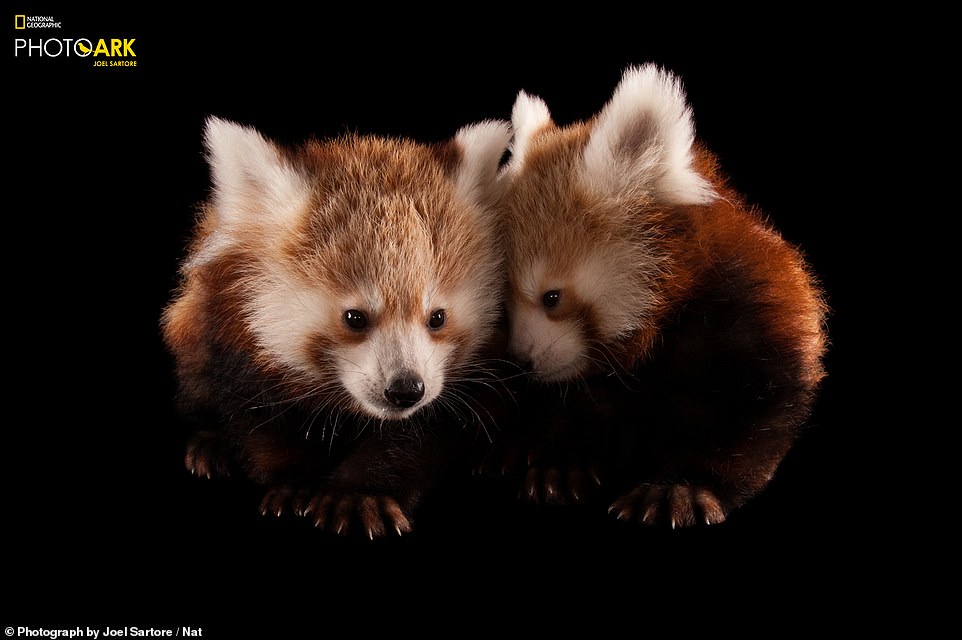 A pair of Endangered Red panda cubs (Ailurus fulgens) photographed at the Lincoln Children’s Zoo in Lincoln, Nebraska. Through National Geographic Photo Ark EDGE Fellowships, National Geographic and the Zoological Society of London (ZSL) provide funding, training and capacity development to young conservationists working to protect at-risk species that are featured in the Photo Ark, like the Red panda 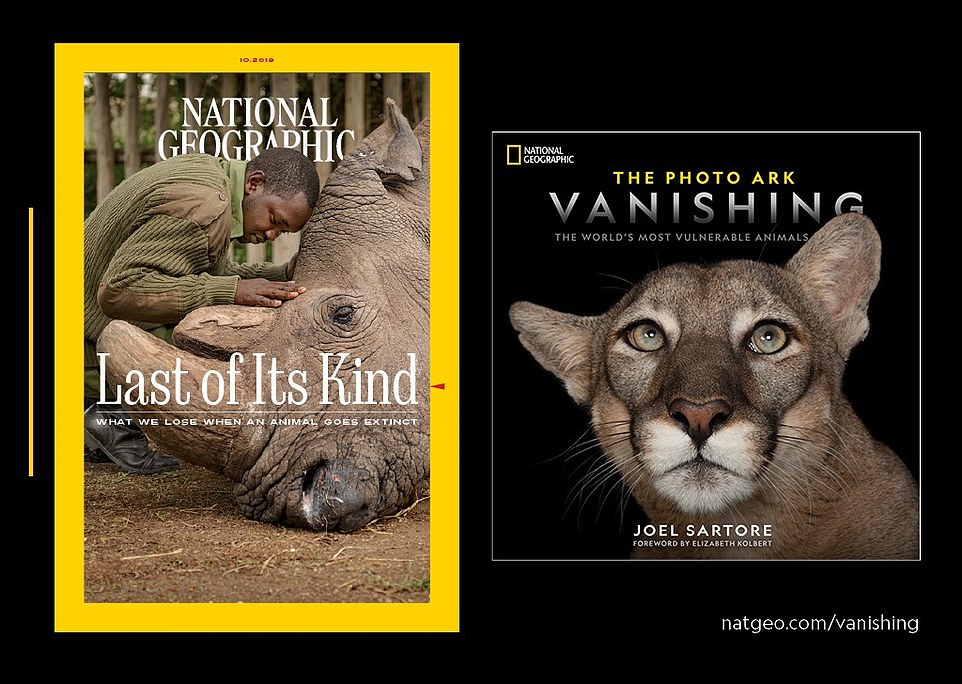 The October 2019 issue of National Geographic features an array of images from The Photo Ark. The project was started by wildlife photographer, Joel Satore in 2005 in an effort to bring attention to endangered animals by allowing their raw beauty and vulnerability stand out in a minimal portrait setting