Nearly 60% of Americans WOULD get a coronavirus vaccine, poll reveals

Who will get the vaccine first and when will it be rolled out?

HHS secretary Alex Azar has offered up a timeline regarding who would be the first to receive the COVID-19 vaccination if they can start rolling out the jabs next month as planned.

The elderly in nursing homes and assisted living facilities will likely be the first to the vaccinated.

Adults with underlying medical conditions that put them at risk of severe COVID-19 illness and people over 65 years of age could also fall into this initial category, according to  according to Operation Warp Speed’s strategy plan.

Inoculations of healthcare workers and first responders will follow, with a goal to complete those shots by the end of January.

Azar said he expects to have enough vaccinations for ‘all Americans’ by the end of March to early April.

Dr Anthony Fauci agreed with this determination, predicting that Americans will likely be vaccinated by April.

A final priority list is still being determined by the CDC’s Advisory Committee on Immunization Practices that will based, in part, on vaccine efficacy data from the various trials, including Pfizer and Moderna.

How many shots will you have to get and how much will it cost?

The COVID-19 vaccine will need to be taken in two doses about three weeks apart to be fully effective.

While there could be multiple vaccines available by next year, they are not interchangeable if they have been developed by different companies.

This means the second dose needs to be from the same manufacturer as the first dose.

Operation Warp Speed’s strategy plan details that those providing the vaccine should be giving out vaccine record cards that details the manufacturer. Record cards can also serve as a reminder about getting the second dose.

Congress and President Donald Trump have already enacted legislation that calls for the vaccines to be free to all Americans.

How many will the US have available?

The government already has a $1.95 billion contract for 100 million doses of the Pfizer vaccine, which is enough to inoculate 50 million people, with an option to acquire 500 million more. 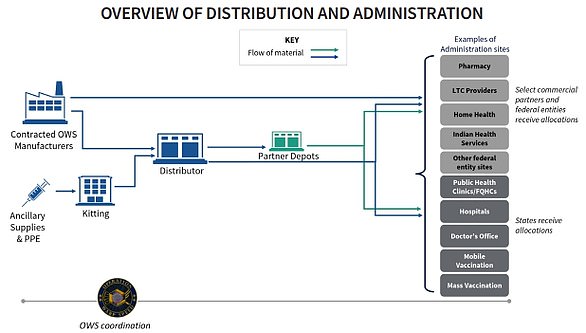 Pfizer has already said it will distribute its own vaccine from its facilities straight to administration sites. Other vaccines will be shipped by a government contractor from the manufacturer

Where will Americans be able to get COVID-19 vaccinations?

The government will be allocating vaccine supplies to states which will then be responsible for administering the jabs.

The government is organizing a free distribution of the vaccine to US states and territories, with each jurisdiction to decide how to distribute the doses to hospitals, pharmacies, doctors or even universities.

In the early stages of the roll out, the CDC has recommended that states make vaccines available at large hospitals and health systems, pharmacies, mobile vaccination providers, occupational health settings for large employers, critical access hospitals, rural health clinics, community health centers and other central locations that can provide vaccination services for a broad area.

The CDC says it has existing agreements with CVS and Walgreens to assist with on-site vaccinations at long-term care facilities.

Operation Warp Speed has indicated they want vaccinations to be available at all healthcare professionals who are licensed to administer vaccines, including pharmacies.

The pharmacies that have already signed on to provide vaccinations, according to the CDC, include: Walgreens, CVS, Walmart, Rite Aid, Kroger Co., Albertsons and Costco.

Who is in charge of shipping out the vaccinations and how will they be handled?

While US Army general Gus Perna is coordinating the distribution of the vaccine, the military will not be involved in shipping out the vaccine to the locations where the jabs will be administered.

Vaccines made by Moderna and other candidates will be shipped directly from the manufacturer by medical supply company McKesson Corp.

McKesson, who has been contracted by Operation Warp Speed for distribution, was also contracted by the government to distribute H1N1 vaccines during that pandemic in 2009-2010.

Pfizer has already said it will distribute its own vaccine from its facilities in Kalamazoo, Michigan and Pleasant Prairie, Wisconsin.

The drugmaker has already created a staging ground at its Michigan facility complete with 350 large freezers to hold the vaccines once they’re created and ready to ship.

Pfizer’s ship-out will include a precise, clockwork-like dance of containers, trucks and planes.

The vaccine needs to be stored at -94 degrees Fahrenheit, so thermal shipping containers will each be filled with dry ice and 975 vials of the vaccine which each contain five doses, for a total of 4,875 doses.

Every day six trucks will take the doses to air carriers such as FedEx, UPS or DHL, which will deliver them across the US in one to two days and across the globe in three. The company expects an average of 20 daily cargo flights worldwide.

FedEx had to obtain special permission from civil aviation authorities to transport so much dry ice, which could pose a danger to the crew should it accidentally undergo ‘sublimation’ and pass from a solid to a gas, the company

Once the boxes have reached their final destination, they can be opened only briefly just two times a day. The vaccines can remain in their boxes for two weeks meaning hospitals will not need a special freezer.

Moderna’s vaccine can be stored at -4 degrees Fahrenheit, which is the temperature of a normal freezer.