Lying in bed with sweat pooling on his chest, Wayne Fletcher felt sure the flu-like symptoms that had plagued him for weeks were more than a winter bug.

As a keen cyclist with no history of health problems, it was unusual for him to feel anything other than fighting fit.

‘I had no idea what the matter was,’ recalls the 49-year-old father of two from Scunthorpe. ‘As well as feeling under the weather, I’d wake up every night drenched in sweat. I’d been prescribed antibiotics, but I was sure there was more to it.’

Unfair? A biased healthcare system continues to overlook the well-being of UK men

Indeed, over the following four years the dental technician continued to suffer ill health, with pelvic pain, sciatica, difficulty urinating and even hallucinations.

Doctors diagnosed a wide range of conditions, including epilepsy and stroke, but despite stays in hospital for up to a couple of weeks at a time, plus countless courses of medication — including antibiotics and even antipsychotic drugs — Wayne’s health failed to improve.

In 2016 the cause was finally spotted: he had prostatitis, a common condition that affects up to 50 per cent of men in the UK and yet which often goes misdiagnosed.

‘Without wishing to sound dramatic, until I was diagnosed and treated, my life was hell,’ recalls Wayne, who is married to Christina, 49, the assistant director of a health trust. ‘I nearly lost my business because I couldn’t work and my marriage was under strain because my health seemed to be dominating our lives. At one point I was so ill I missed my son’s wedding — which I’m still so upset about.

‘What frustrates me is that I now know that prostatitis is a common complaint. It should have been picked up earlier.’

Last week, NICE revealed that women wait between four and ten years in crippling pain for a diagnosis of endometriosis (where womb-like tissue forms in other parts of the body). But many men face similar problems with prostatitis.

The term is used for any inflammatory condition of the prostate (usually caused by infection). Up to half of all men develop symptoms at some stage, most commonly between the ages of 30 and 50. If treated quickly, prostatitis usually resolves within weeks; left untreated, it can last years.

Symptoms vary and include the need to urinate frequently or urgently, a heavy feeling (like sitting on a golf ball) — and pelvic pain (in and around the penis, back passage and testicles). 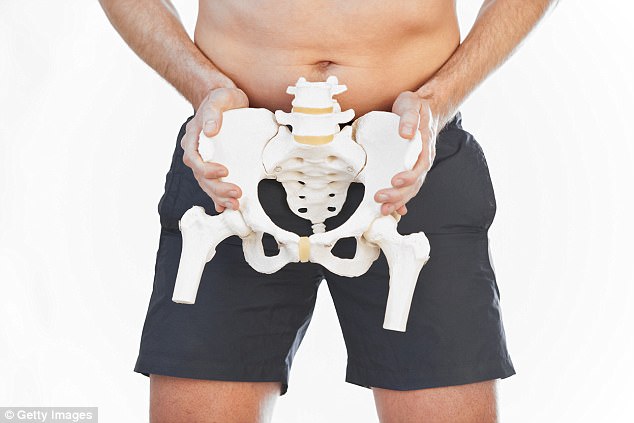 Painful: Aside from cancer and suicide, men are also at high risk of severe pelvic pain

‘Prostatitis can go undiagnosed because it is a “symptom complex condition” — it presents in a number of ways similar to other conditions — such as a urinary tract infection (UTI),’ explains Paul Cathcart, a consultant urological surgeon at Guy’s and St Thomas’ NHS Foundation Trust in London. ‘There’s no specific test. It is a diagnosis of exclusion.’

There are two types of prostatitis. Bacterial prostatitis is where a UTI spreads to the prostate, causing inflammation. If the infection persists, as in Wayne’s case, it causes long-term fever and chills, joint, muscle and back ache and pelvic pain. With non-bacterial prostatitis, there is inflammation without any sign of infection. After developing night sweats in October 2012, Wayne was prescribed antibiotics by a nurse at his GP surgery. Over the next few weeks he continued to suffer from night sweats, pelvic aches, an urgent need to go to the loo, dizzy spells and hallucinations.

‘It was terrible,’ Wayne says. ‘I started seeing things such as odd faces and dark figures. I thought I was losing my mind.’

After a particularly bad hallucination in which he lunged at his wife because he was, he says, seeing strange images, Wayne was admitted to hospital. He was diagnosed with a kidney infection although a scan also revealed some swelling on his prostate.

This was dismissed as insignificant and he was discharged with antibiotics. His symptoms — especially the urinary problems, pain and sweating — persisted, and that Christmas he blacked out. Doctors were convinced he had an infection but Wayne was also referred to a stroke clinic. 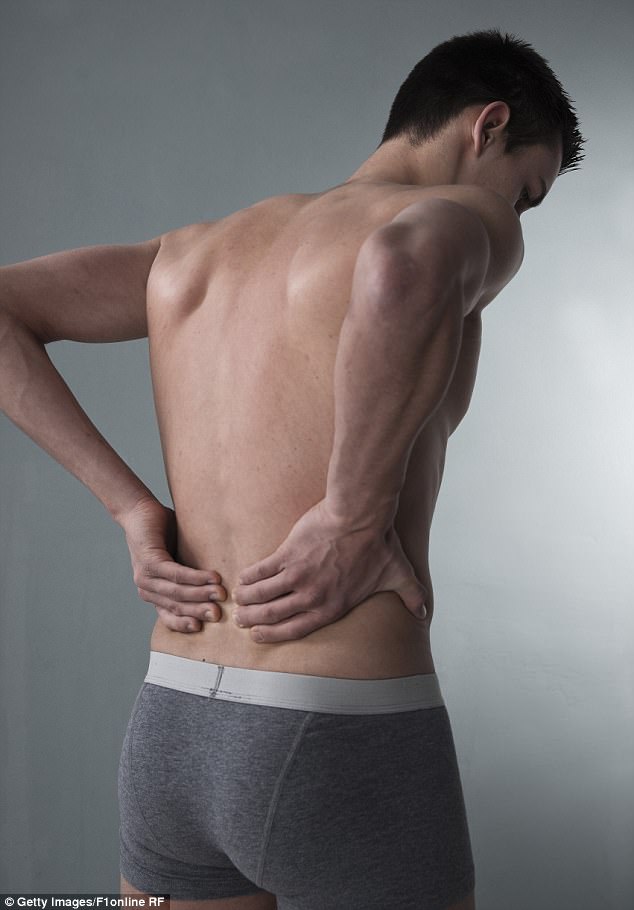 Be careful: Prostatitis is a very common condition and, if left untreated, it can last years

Although a stroke was ruled out, he was seen by a neurologist who, in April 2013, told him he had epilepsy (a diagnosis dismissed by another doctor after brain scans).

‘I felt like I was going crazy,’ says Wayne. ‘I was being told so many different things, including that I had mental health problems.

At one point I was prescribed anti-psychotic drugs — though I came off them after three weeks because they made me feel even worse.’ Just over a year after his first symptoms he started getting shooting pains in his leg — and was told it was sciatica.

More scans followed and finally, in March 2016, one revealed some suspicious swelling on his prostate, at which point Wayne was given the devastating news it could be cancer.

‘Part of me was absolutely terrified,’ he says. ‘Yet there was part of me that was relieved that there seemed an end to the confusion.’

A biopsy revealed he had chronic bacterial prostatitis. Although he was prescribed the correct antibiotics, he continued to feel ill. As Wayne recalls: ‘I felt so rotten. For weeks I had been feeling dizzy, I had the chills, I couldn’t get out of bed. I felt desperate for the loo then it would take 20 minutes to urinate. It was during this period, in April, that I had to miss my son’s wedding.’

Deeply frustrated that treatment didn’t seem to help, he and Christina researched the issue on the internet and discovered that in extreme cases, where there is no response to antibiotics, removing the prostate was the only cure.

Though this was a drastic move, Wayne was desperate. He went to see Professor Chris Eden, a consultant urologist at the Royal Surrey County Hospital in Guildford.

‘Prostatitis is an undiagnosed problem on a large scale,’ says Professor Eden. ‘Infection in the prostate is difficult to treat: the bacteria gets coated in secretions from the prostate, which makes it hard for antibiotics to penetrate.

‘It’s important when treating prostatitis to use the right antibiotics, such as ciprofloxacin and norfloxacin, and for long enough — usually six weeks.’

Most cases respond well to the right type and length of antibiotics, adds Graham Young, a consultant urologist with the University Hospital of South Manchester.

However, getting the right antibiotic is key: ‘The problem with repeatedly prescribing short courses of antibiotics or the wrong type is that the bugs become resistant,’ explains Professor Eden. ‘When this happens, removing the prostate — the last resort — is the only choice. Patients are desperate to feel better and the operation is the way forward.’

Wayne’s prostate was removed in November 2016. He felt sore for several days but the other symptoms vanished. ‘I couldn’t believe it,’ he says. ‘There was no sweating, no hallucinations, the pains in my leg and pelvis had gone and I didn’t have any urinary problems. I felt like a normal person. It was absolutely wonderful.’

Professor Eden advises men who suspect they have prostatitis to ask their GP for a urine sample to check for signs of a UTI. ‘The lab will be able to say which antibiotics would work best. If your symptoms don’t come under control be sure to get a referral to a urologist.’

Wayne returned to work six weeks after the operation and has resumed his full active life. ‘It feels like a miracle,’ he says. ‘I’m glad to put this nightmare behind me. But I’m frustrated that it took so long to work out what was wrong.

‘I had a particularly virulent infection in my prostate. Had this been picked up earlier I could have been spared four years of ill health. I wouldn’t have missed out on so much with my family — especially my son’s wedding.’