A Nebraska high school has come under fire for not letting a graduating teen wear her US Army sash during the ceremony.

Megan Pohlmeier, 18, was given a black and gold US Army sash by her recruiter at the Grand Island office days before Hasting Senior High School’s graduation.

The teen said she asked her school’s principal Thomas Szlanda if she could wear the sash during the ceremony and he said no.

‘It was something I worked really hard to earn. They told me ”no” and did not really give me a reason,’ Pohlmeier told the Omaha World-Herald.

Then when her father called the school, Principal Szlanda gave the same response.

Discouraged, the teen settled on wearing the sash tucked under her graduation gown to take photos with it on after the ceremony.

However, while the graduates were lining up to walk across stage, the principal noticed the sash under her gown.

‘He pulled me out of line and said, ”I talked to you and your father and you are not to be wearing that. If I see you wearing that again, you will not receive your diploma,”’ she said.

Pohlmeier respected the principal’s orders and did receive her diploma. 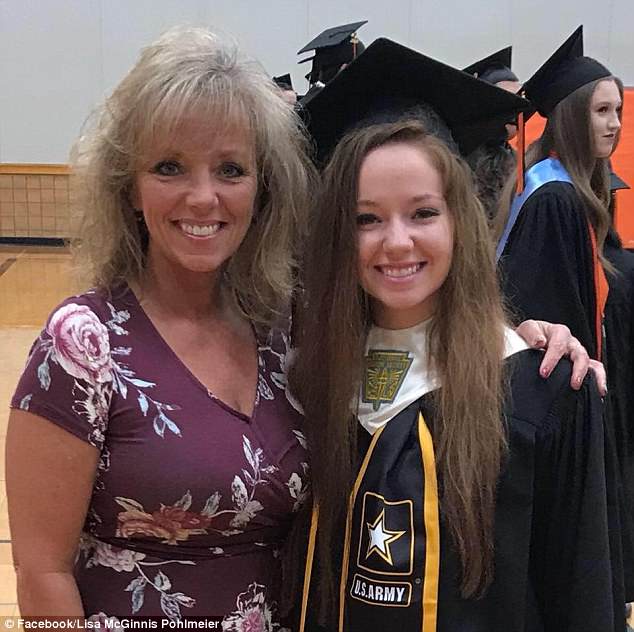 One woman Shawna Ewoldt called the behavior ‘unacceptable’, saying Pohlmeier is ‘Army strong and I am proud of her!’.

‘The brave young woman willing to make sacrifices for her country, deserves much better than this!’, the post read.

Hastings Public Schools Superintendent Craig Kautz said that the school could not have denied Pohlmeier her diploma, only her request to wear the sash.

‘At the time, we were trying to get around 250 graduates lined up alphabetically and have the graduation start at exactly 2pm,’ Kautz said. ‘At a certain point, I think, in all of the discussion that occurred, the principal was just saying, ”Get the sash off and get in the graduation line or don’t go through the graduation ceremony.”’

Hastings Public Schools said in a Facebook post that students are not allowed to wear any accessories on their gowns except for those earned from the school, typically for scholastic success.

‘No student was allowed to display any symbol of any organization other than those symbols earned while attending Hastings Senior High,’ the post reads.

‘She earned her diploma, so we are not going to deny her that,’ Kautz said. ‘The only thing we would deny her is the ability to go through the graduation ceremony. Our graduation ceremony, as it states in our (student) handbook, is voluntarily. It is not something that is mandated to get the diploma.’

Pohlmeier said the principal ‘belittled’ her by pulling her out of line and making a scene.

Though she did walk and receive her diploma, the graduate said she believes things could have been ‘handled better’. 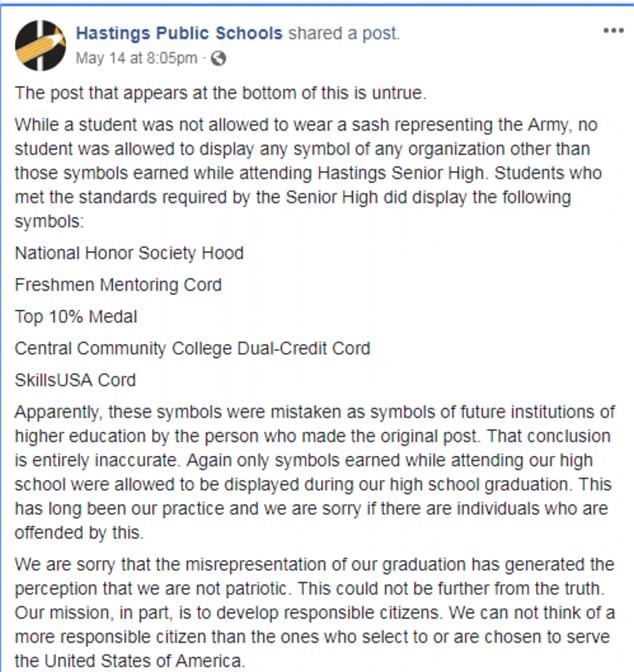