There are few sights on Earth’s landscapes as awe-inspiring as a volcano – active or dormant.

And a new book underscores this, offering ‘a visual celebration of the most impressive, infamous and active volcanoes from all corners of the globe’.

Volcano, by Robert J Ford (www.amberbooks.co.uk), takes the reader on an eye-opening photographic tour from Hawaii to Chile and from Portugal to New Zealand, taking in phenomena that, as Ford says in his introduction, are reminders of Earth’s raw power.

He writes: ‘We humans have felt for centuries that we have mastery over our world – transforming it to suit our needs and ways of life. Yet our planet now and again sends reminders that we are but residents upon its back.

‘Volcanoes are the most powerful of these, which humans snuggled up against over time as we expand our built environment into every corner of the natural world.’

PUYEHUE-CORDON CAULLE, RANCO PROVINCE, CHILE: A stunning photograph of one of this century’s most colossal eruptions. Ford writes: ‘Puyehue-Cordon Caulle in the Southern Volcanic Zone is a complex of two volcanoes: Puyehue and the fissure system of Cordon Caulle. After 51 years of inactivity, in 2011–12, it exploded in what became the biggest eruption of the 21st century so far. An estimated 100million tons of ash, sand and pumice were ejected, some of which circled the globe, reaching other parts of South America, South Africa, Papua New Guinea, Australia and New Zealand’

LAGOA DE SANTIAGO, SETE CITADES, SAO MIGUEL ISLAND, AZORES, PORTUGAL: ‘The Lagoa de Santiago fills one of the cones that arose in the caldera of the Sete Citades Massif, an ancient stratovolcanic complex at the western end of Sao Miguel Island,’ writes Ford. ‘The caldera is dominated by the twin lake of Lagoa das Sete Citades (seen in the background), which is said to have been created by the tears of two young lovers forbidden to see each other by the king’

MOUNT ST HELENS, WASHINGTON, USA: ‘The landslide that preceded and triggered the blast of pyroclastic material in the 1980 eruption,’ writes Ford, ‘was caused by the collapse of the entire north face of the mountain after an earthquake and carried with it debris that covered an area of 62 square km (24 sq miles) with many metres of rubble. It was the largest landslide in recorded history and left a clear view into the volcano’s crater for the first time’ 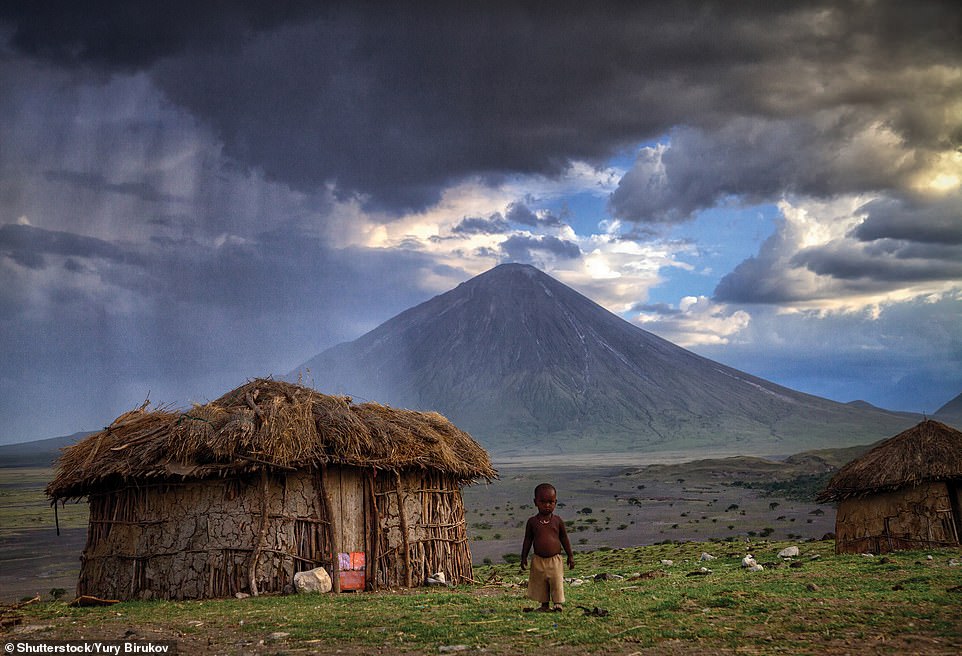 OL DOINYO LENGAI, TANZANIA: ‘Ol Doinyo Lengai varies between eruptions of liquid lava that form lava lakes and fountains (known as effusive eruptions) and explosive eruptions that create large cinder and ash cones,’ writes Ford. ‘An episode of the latter type in 2007 spewed ash thousands of metres into the air, which also fell on the surrounding countryside, forcing local residents to flee with their livestock. Explosive eruptions continued into 2008, building a cone over 100m (330ft) high that encircled a steep-sided crater’ 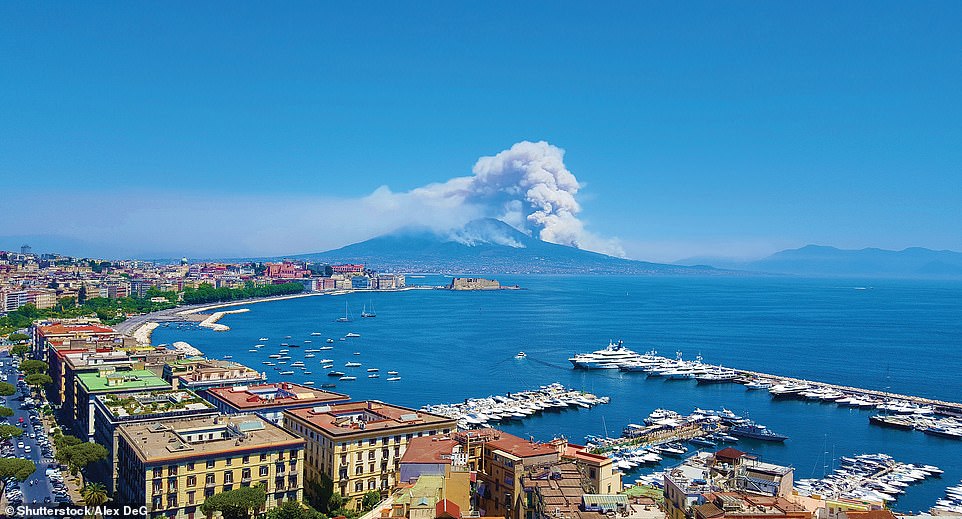 MOUNT VESUVIUS, CAMPANIA, ITALY: This volcano poses a deadly threat to millions. Ford writes: ‘Mount Vesuvius, part of the Campanian Volcanic Arc, dominates the Bay of Naples and the population centres lying within its reach. It is these nearby settlements that make Vesuvius one of the most dangerous volcanoes in the world, with three million people in Naples near enough to be threatened by an eruption and the mountain being the only mainland European volcano to have erupted in the past 100 years (1944 being the last incident)’ 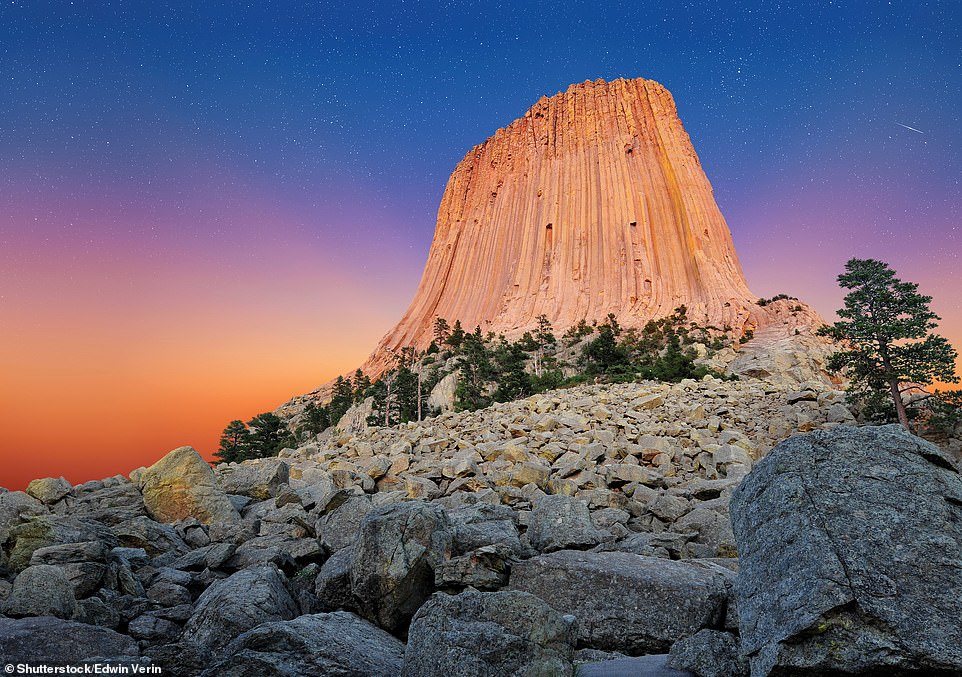 DEVILS TOWER, WYOMING, USA: It’s a volcanic tower that’s out of this world, having made an appearance in Steven Spielberg’s Close Encounters of the Third Kind. Ford reveals that this 264m (867ft) geological feature is considered sacred by Northern Plains Indians and is thought to have been formed ‘by an intrusion of magma into surrounding sedimentary rock’ and ‘would only have become a visible landmark when all the sedimentary material eroded away’. Ford adds: ‘Some believe, however, that Devils Tower is all that remains of what was once a huge explosive volcano’ 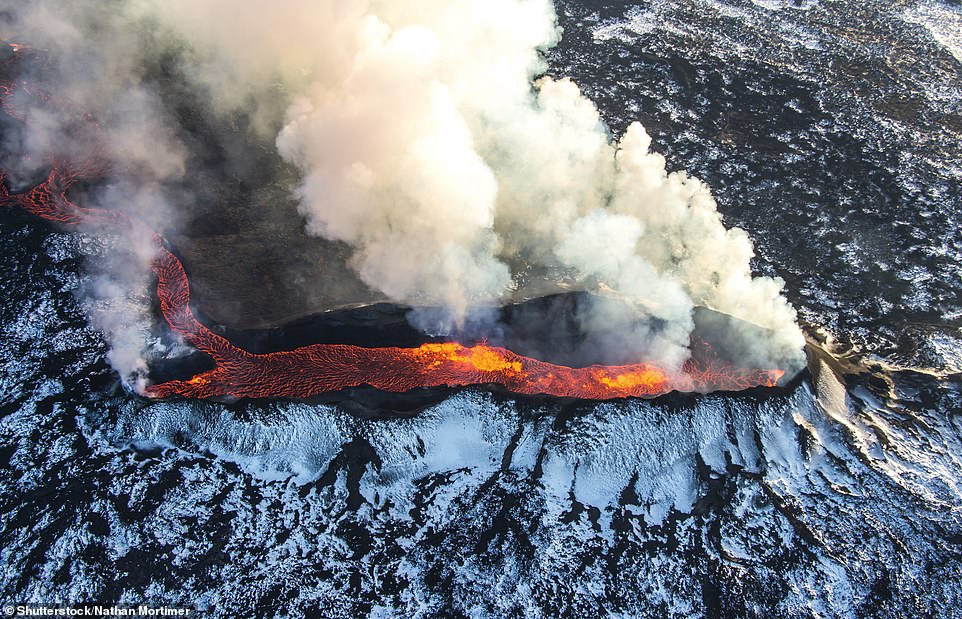 BARDARBUNGA VOLCANIC SYSTEM, VATNAJOKULL NATIONAL PARK, ICELAND: ‘Baroarbunga is a stratovolcano located under the Vatnajokull ice cap (known as a subglacial volcano), Iceland’s biggest,’ explains Ford. ‘During the 2014–15 eruption, the emptying of Baroarbunga’s magma chamber saw a subsidence of its caldera by around 65m (213ft), which also caused a sinking of the surface of the glacier under which the volcano sits’ 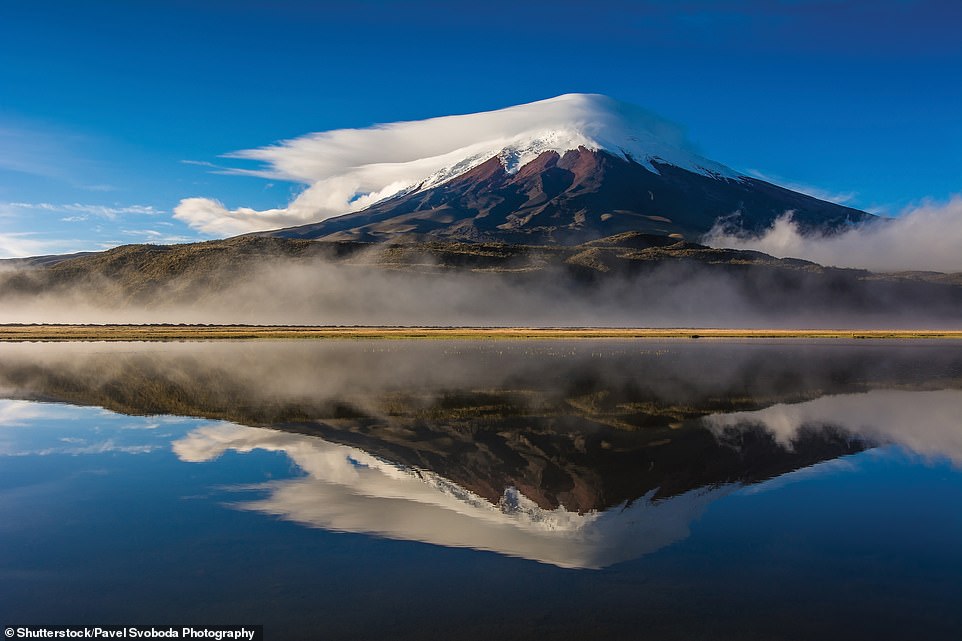 COTOPAXI, COTOPAXI PROVINCE, ECUADOR: ‘Cotopaxi’s biggest known eruptions were in 1742, 1744, 1768 and 1877,’ reveals Ford. ‘The latter three events destroyed Latacunga town on each occasion. During the 1877 eruption, pyroclastic flows on all sides of the mountain melted the entire ice cap to cause lahars [mudflows] that travelled more than 100km (62 miles) to the Pacific Ocean. Modern eruptions threaten flash-melts of the new glacier and lahars that pose a great risk to the land and population nearby’ 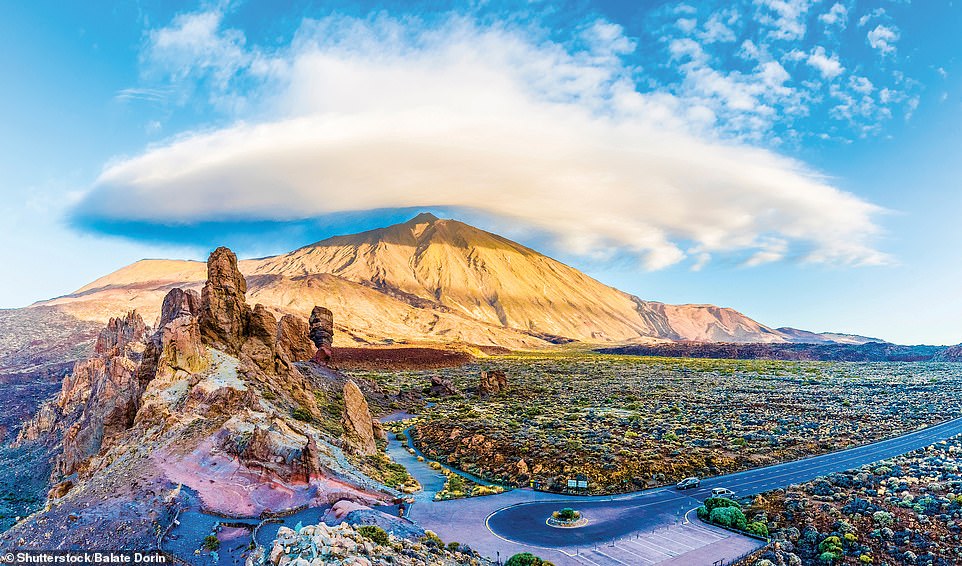 TEIDE, TENERIFE, CANARY ISLANDS, SPAIN: The summit of Teide is the highest point in Spain and the islands of the Atlantic at 3,718m (12,198ft). It rises out of the caldera of another giant volcano that helped birth Tenerife, reveals Ford. He continues: ‘The island was created through the accretions of three large shield volcanoes that formed their own small landmasses. Between these another volcano, Las Canadas, formed, joining all four together in a small island, which then grew over the millennia. Las Canadas later collapsed to create the caldera, out of which Teide grew over the course of the last 160,000 years’ 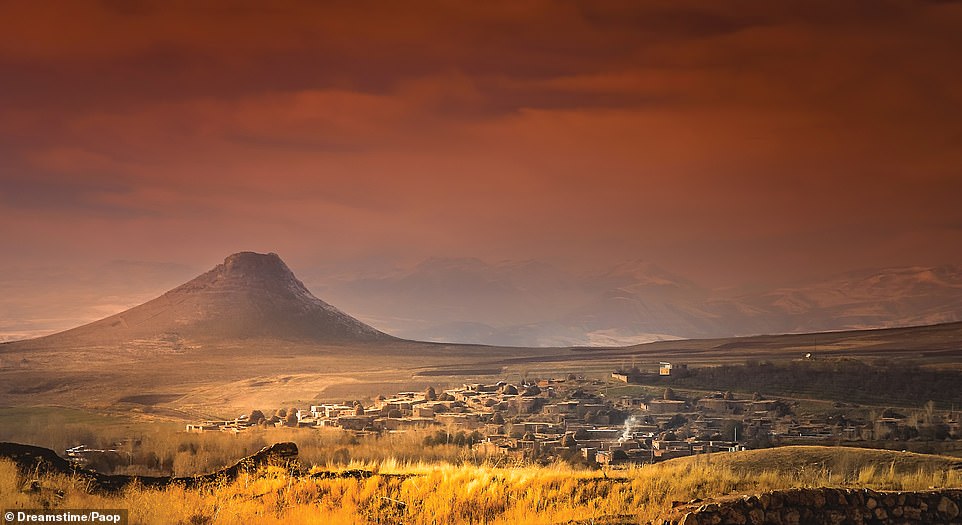 ZENDAN-E SOLEYMAN, WEST AZERBAIJAN PROVINCE, IRAN: ‘The hollow cone of Zendan-e Soleyman is a 107m- (351ft) tall ancient extinct volcano formed of mostly calcium sediments,’ writes Ford, ‘with the remains of various temple buildings surrounding the peak. Its crater, 65m (213ft) wide and 85m (279ft) deep, was filled with water centuries ago but has long since dried up. The mountain takes its name – “the Prison of Solomon” – from the biblical king Solomon, after a local legend that tells how the Hebrew king imprisoned monsters within the mountain’s deep cone’ 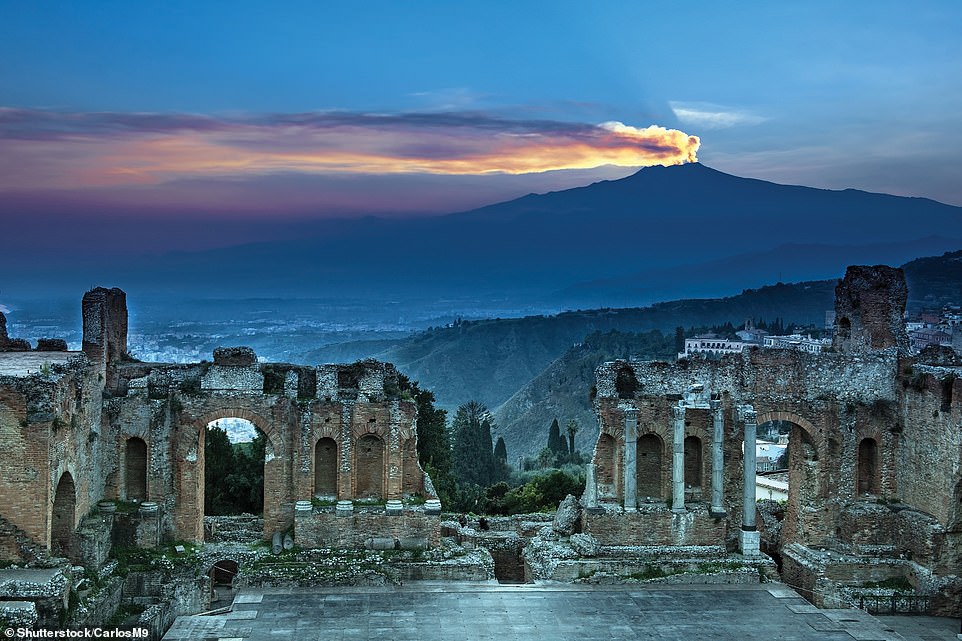 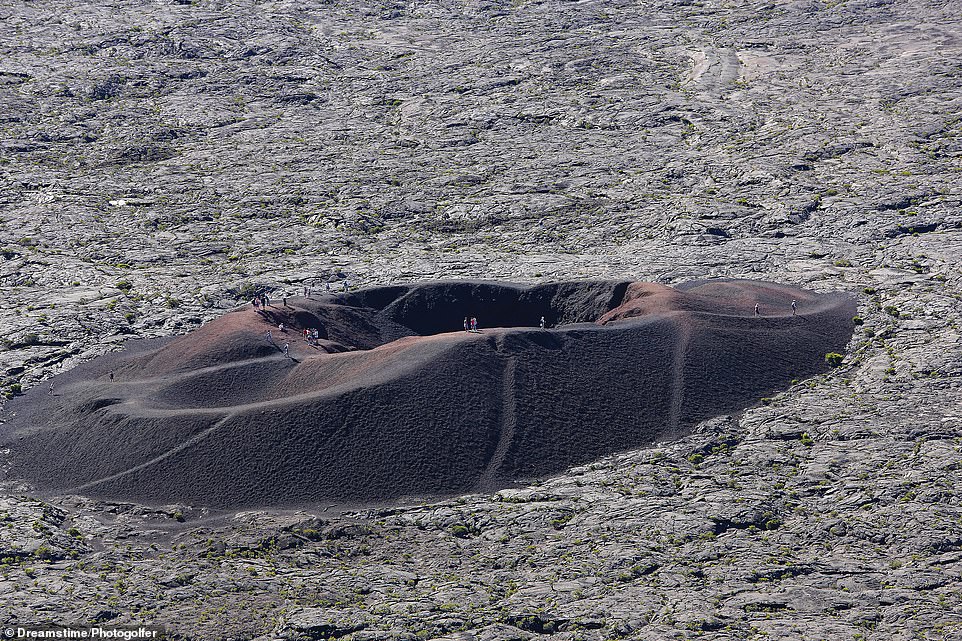 PITON DE LA FOURNAISE, RÉUNION ISLAND, INDIAN OCEAN: This shield volcano on Reunion Island, a French departement, is one of the most active volcanoes in the world, reveals Ford. He continues: ‘Its name translates as “peak of the furnace”, an indicator of how often it erupts, the most recent instance being in October 2019. Despite this, it is a popular tourist site, with visitors able to access the peak. A shield volcano is one with a low, broad profile with shallowly sloping sides that has been built up over time by repeated emissions of relatively fluid lava (usually basaltic). Shield volcanoes are characterized by their low explosivity and lack of pyroclastic material’ 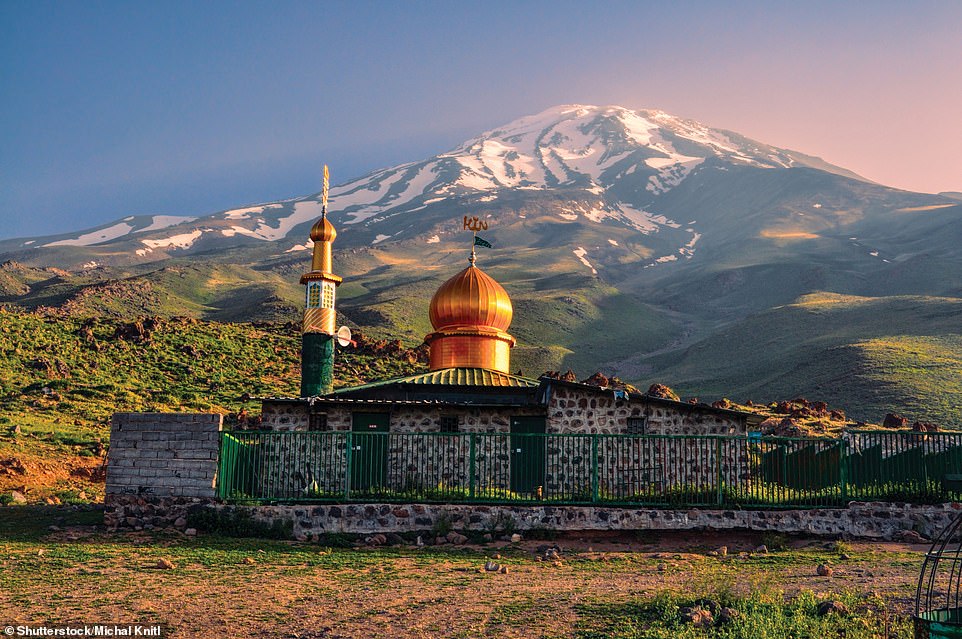 MOUNT DAMAVAND, IRAN: At 18,405ft (5,610m), Damavand is Asia’s highest volcano. It first erupted almost 1.78million years ago, reveals Ford. He continues: ‘After a number of eruptions around 600,000 and 280,000 years ago, which helped create its steep cone of ash and lava flows, Damavand’s last one was around 5300 BC. The volcano is topped by a small crater and there are adjacent fumaroles, hot springs and mineral deposits, which imply Damavand could be considered as a potentially active volcano’ 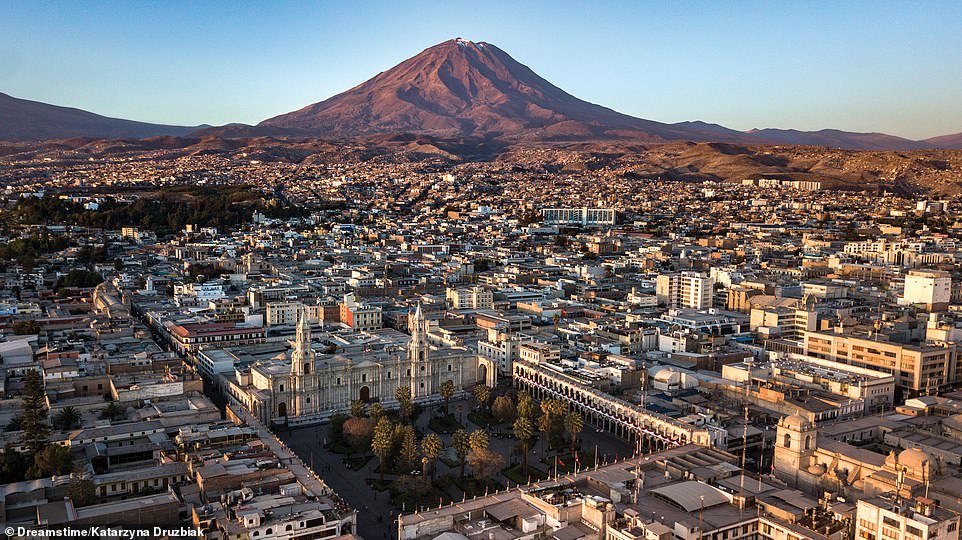 MISTI, AREQUIPA, PERU: ‘The long history of eruptions from Misti and its neighbour volcanoes, Chachani and Pichu Pichu, has made the soil extremely fertile and the surrounding area one of the most agriculturally productive in Peru,’ says Ford. ‘Residents of Arequipa have also made use of a local white volcanic rock called sillar to construct a significant number of buildings there, which has resulted in Arequipa being nicknamed “the white city”‘ 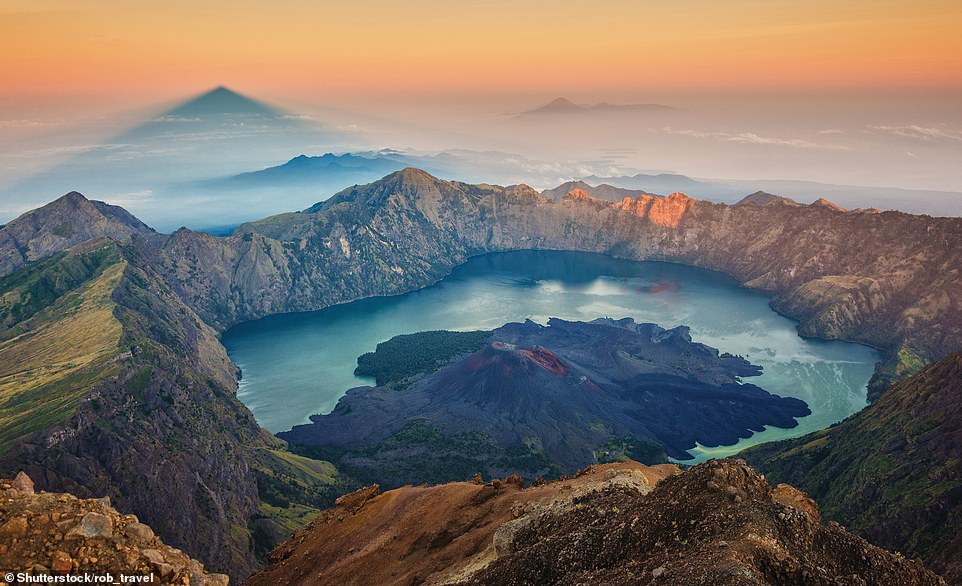 MOUNT RINJANI, LOMBOK, INDONESIA: At 3,726m (12,224ft), this is the second-highest volcano in Indonesia. Ford reveals: ‘Its caldera was formed by the 1257 eruption of Samalas in one of the largest volcanic events since the end of the last ice age 11,500 years ago, and which may have triggered a period of global cooling and failed harvests. Rinjani’s caldera is filled by Segara Anak lake, which itself saw the emergence of a cone now known as Gunung Baru Jari in 1994 and 1995 eruptions, the lava from subsequent eruptions of which has filled a part of the lake’ 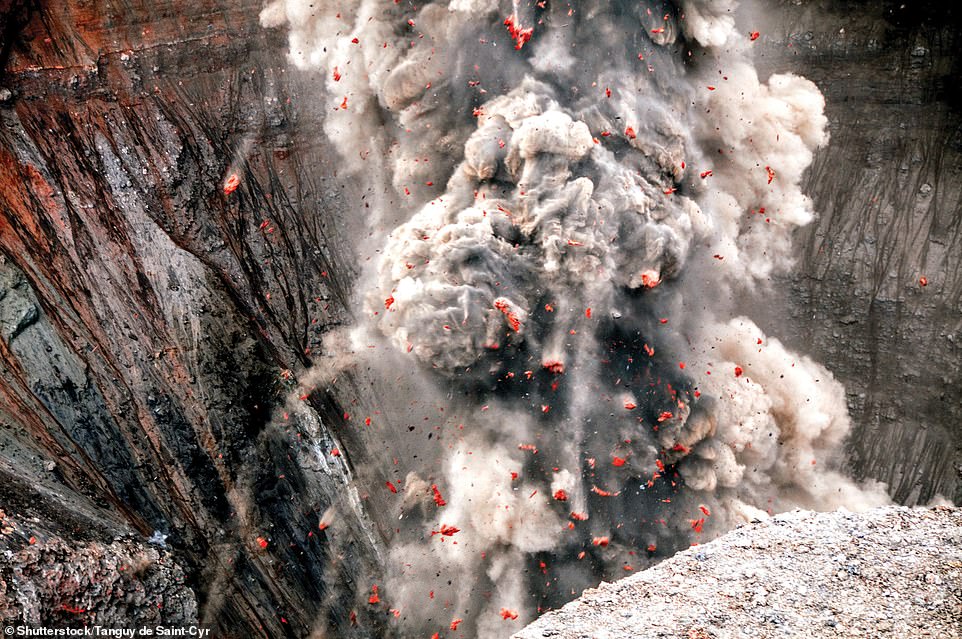 ANAK KRAKATOA, KRAKATOA ARCHIPELAGO, SUNDA STRAIT, INDONESIA: Ford writes: ‘The third of the four major explosions of the 1883 Krakatoa eruption was heard as far as 4,780km (2,970 miles) away, with its pressure wave travelling around the Earth a number of times. This was said to have burst the eardrums of sailors 64km (40 miles) away. Bodies were washing up on the shores of East Africa up to a year later’ 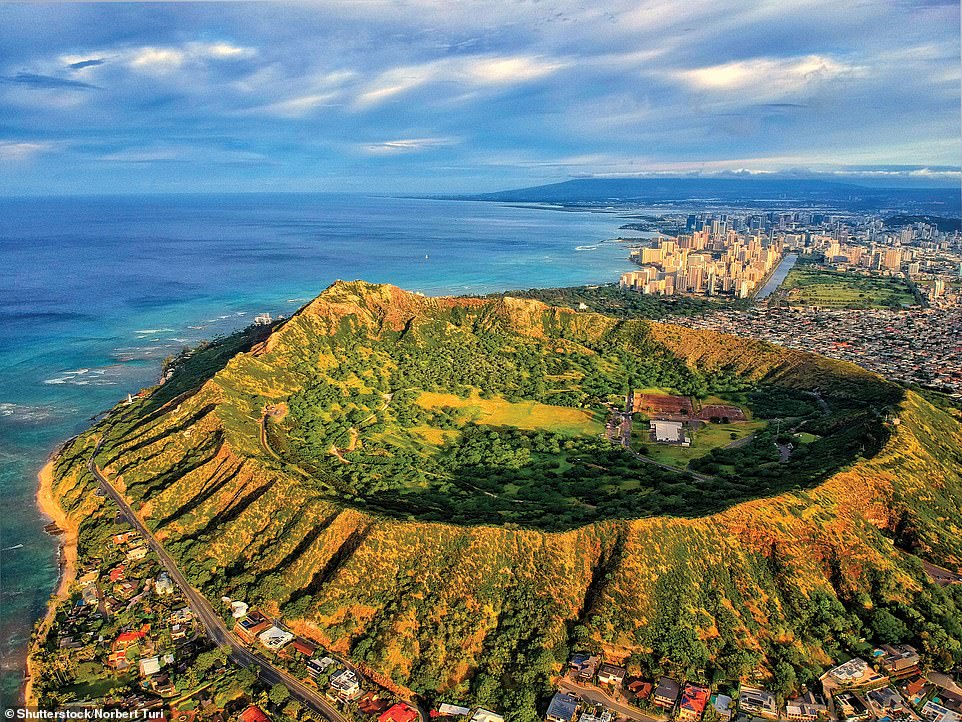 DIAMOND HEAD, OAHU, HAWAIIAN ISLANDS, USA: This breathtaking picture shows Diamond Head, ‘a volcanic tuff or ash cone, a volcano born when magma boils water to steam to cause an explosion of ash, rock and volcanic bombs’. Ford continues: ‘The resulting pyroclastic material and eruption column fallout build the cone. Diamond Head is part of a stage of volcanism on the island that has created numerous cones and vents and is about 400,000–500,000 years old’ 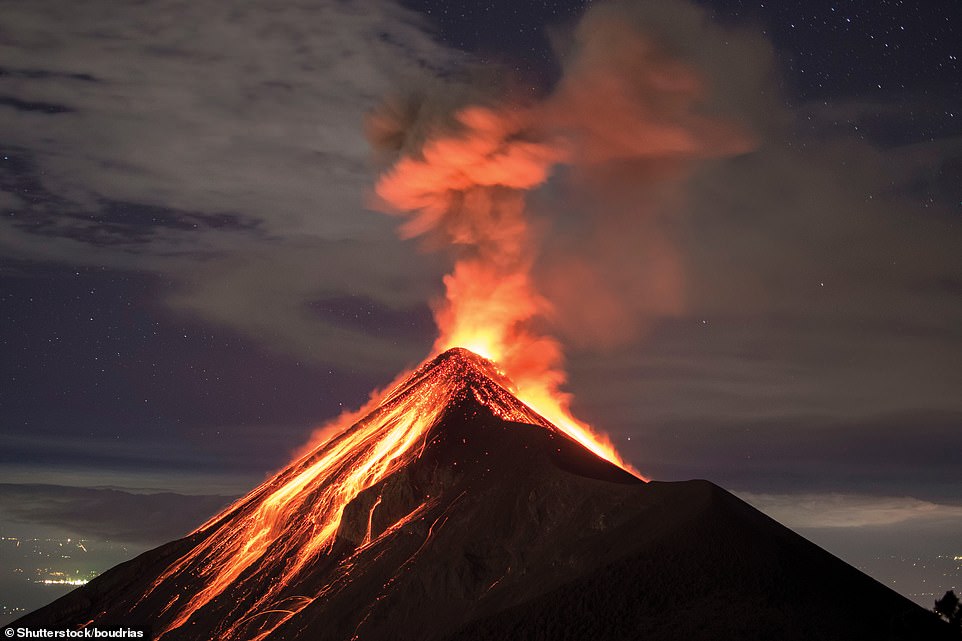 FUEGO, ANTIGUA, GUATEMALA: ‘Typically, eruptions of Fuego were of a Vulcanian nature (small yet violent explosions with dense clouds of ash-laden gas and rock, with both pyroclastic and thick magma flows) and lasted a few hours to several days,’ explains Ford. ‘From 2002, Fuego began a period of almost constant activity that saw bursts of ash and lava, which culminated in an unexpected eruption in 2018 that buried several villages and killed nearly 200 people’ 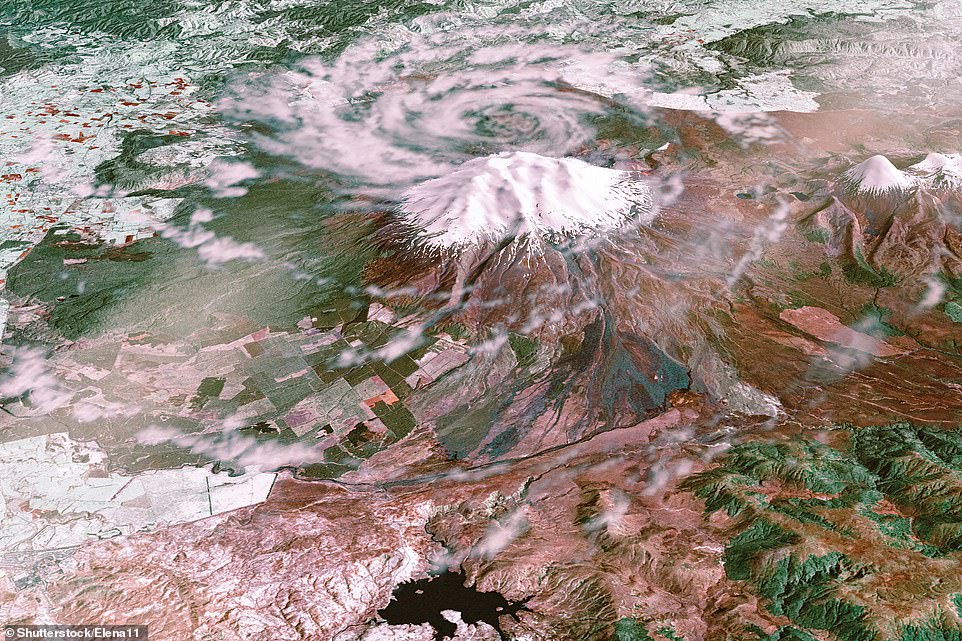 MOUNT RUAPEHU, TONGARIRO NATIONAL PARK, NORTH ISLAND, NEW ZEALAND: ‘A series of very explosive Plinian eruptions occurred at Ruapehu between about 22,600 and 10,000 years ago,’ says Ford. ‘Since then, only one vent has probably been active, at Crater Lake in the summit region. Major eruptions in historic times seem to occur every 50 years, with the lake filling with warm, acidic water in between’ 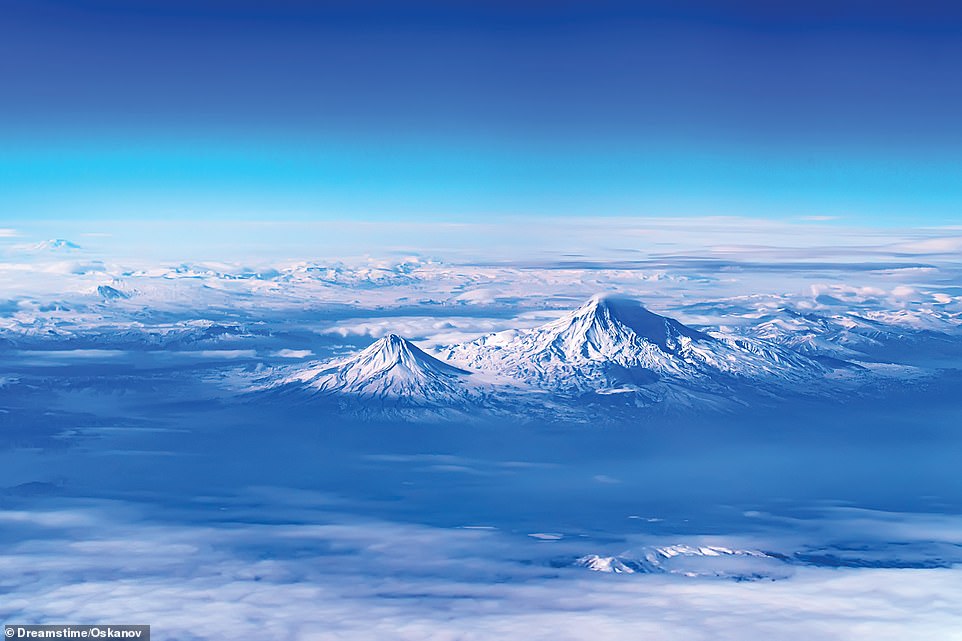 MOUNT ARARAT, TURKEY: ‘Mount Ararat, near the Turkey–Armenia border, consists of two volcanoes,’ explains Ford, ‘Great Ararat and Little Ararat. Great Ararat is the highest peak in Turkey with an elevation of 5,137m (16,854ft). Ararat is a complex or compound volcano, one that has changed either its eruptive habit or location of the main vent area. The mountain is considered by some to be the resting place of Noah’s Ark’