Video of a New Jersey wrestler forced to cut off his dreadlocks after a referee refused to let him compete with a helmet has drawn fury from folks on social media calling the official’s forfeit threat racist.

‘A referee wouldn’t allow Andrew Johnson of Buena @brhschiefs to wrestle with a cover over his dreadlocks,’ said SNJ’s Mike Frankel in the Thursday clip that has been viewed more than 351,000 times.

‘It was either an impromptu haircut, or a forfeit. Johnson chose the haircut, then won by sudden victory in OT to help spark Buena to a win.’

Andrew Johnson was subjected to the impromptu hair cut right before his match competing for Buena Regional High School in Buena, New Jersey 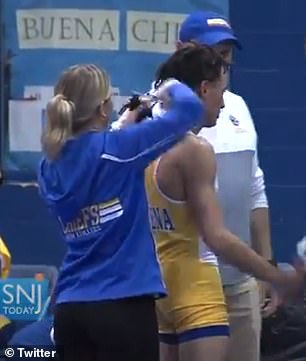 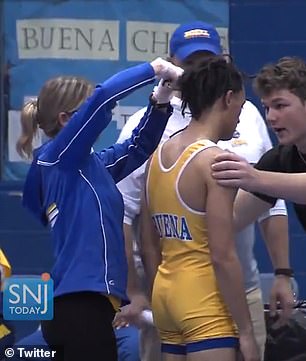 In the footage, a white woman can be seen chopping off Johnson’s hair and leaving it in shabby condition

The referee who made the call for the haircut demand was Alan Maloney.

In the footage, a white woman can be seen chopping off Johnson’s hair and leaving it in shabby way. The video later cuts to Johnson dominating his opponent and pinning him to the ground to win the match.

Frankel added that the move showcased that Johnson was the ‘epitome of a team player.’

But many on social media noted that Johnson is black and the fact that he had to cut off his hair showcased obvious racist practices that are enacted towards black hairstyles. 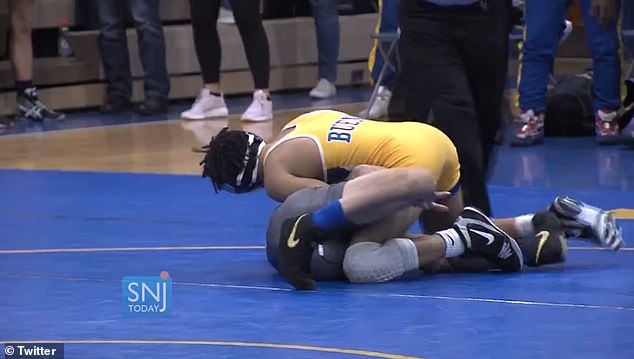 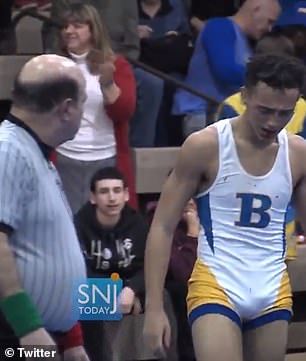 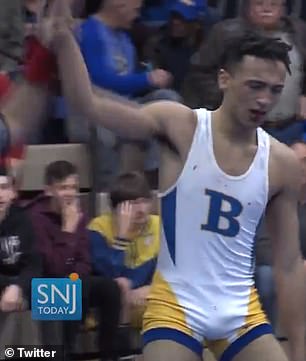 It was soon discovered that the referee, Alan Maloney, has had a history of racist incidents. Maloney can be seen raising the teens hand after he won his match

‘This dehumanizing and what anti-blackness look like in sports,’ said producer Alex Medina. ‘Andrew Johnson was failed at every possible level by his coaches. They should have defended him and protected his dignity even if it cost them a loss.’

The sentiment was shared by Bongi Gwamanda, who added: ‘Every adult in there failed Andrew Johnson…especially his coach and the ones cutting his hair.’

Katie Love added: ”The epitome of a team player’ would be if his coach and team decided not to let a racist referee belittle their teammate. Andrew Johnson might be the hero here, but everyone who let this happen to him is a coward.’

Journalist and author George M Johnson asserted: ‘This is racist. There is nothing good about this story. It’s anti-Black AF to tell someone they must forfeit bc of their hair.’

It was soon discovered that the referee, Alan Maloney, has had a history of racist incidents.

‘The referee is a jerk who was caught using racial slurs two years ago,’ said Brian Martin. ‘Andrew Johnson is to be admired, but many people failed this kid.’

Many on social media noted that Johnson is black and the fact that he had to cut off his hair showcased obvious racist practices that are enacted towards black hairstyles. 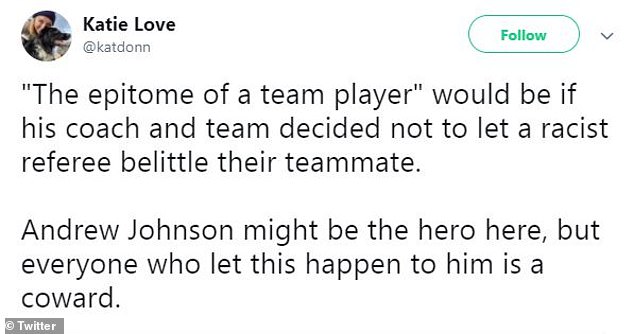 On March 25, 2016, Maloney attended a work gathering for officials where he called a fellow African American referee a ‘n****r.’

The two had appeared to have gotten in an argument over homemade wine when the comment was made, according to the Courier-Post. Another referee, a black man named Preston Hamilton, slammed Maloney over the remark.

The referree claimed that he didn’t remember making the remark but that he accepted eye witness accounts as to what occurred.

‘You know, people do make mistakes and I apologized,’ Maloney said. ‘I really don’t think this should go any further than it’s gone anyhow. … The remark was not made to him. After he told me what I said, it was pertaining to us breaking each other’s stones. … I didn’t remember it. I was told it. I believed it and said, ‘Yo, that ain’t me.’ That’s when I called him right away and that’s when he told me we were good.’

Maloney agreed to participate in sensitivity training and an alcohol awareness program. Both he and Hamilton were suspended for a year, but those suspensions were then overturned. 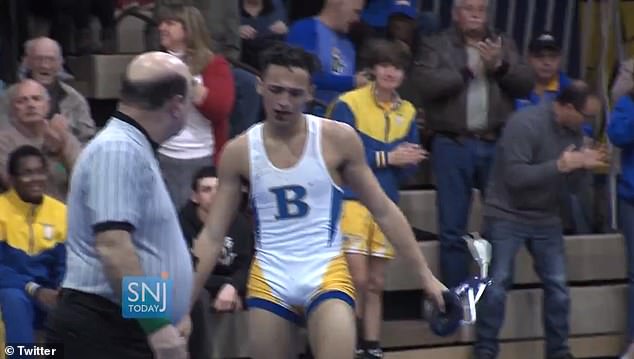 On March 25, 2016, Maloney (left) attended a work gathering for officials where he called a fellow African American referee a ‘n****r’

At the time, Maloney had added: ‘We were in our own time, I wasn’t doing anything associated with New Jersey wrestling. It wasn’t sanctioned by the NJSIAA or anything the NJWOA put in. This was a tournament where a bunch of other officials were at.

‘It was two men, a group of guys, having fun and it was just a slip-up. If you can’t see past that, then I don’t know what to say. I made a mistake and I apologized for it. And it was accepted.’

Black hairstyles in work/extracurricular settings have been heavily scrutinized for years, with many racist policies enacted to prevent black folk from sporting their natural hairstyles.

Earlier this year in August, Clinton Stanley Sr posted a video on Facebook after a Christian school in Florida refused to let his six-year-old son attend school because of his hair. The boy would eventually transfer schools.