New push to give $40,000 CASH to Australians building their own homesto fire up struggling economy

New push to give $40,000 CASH to Australians building their own homes as part of $13billion plan to fire up struggling economy

Australians could receive $40,000 cash to build their own homes if a plan by construction industry bosses goes ahead.

The building and construction stimulus package has been proposed by the Master Builders Association and is worth more than $13billion.

Spokesperson for the organisation Will Frogley told Daily Mail Australia the package has been designed to boost struggling economy and save about 635,900 jobs that were lost during the coronavirus crisis.

While the group has presented a number of measures to the Federal Government in a report commissioned by consulting firm Ernst & Young, the cash boost is a major component of the plan.

The package would generate an estimated $30.9 billion in gross domestic product and create 105,500 construction jobs (pictured: a construction site in Adelaide, SA)

‘All the measures are important but the most important one is the $40,000 grant,’ he said.

‘This is because building new houses provides a massive multiplier effect in the economy that is virtually unmatched.’

He explained that more than 100 people work on the average suburban house, including plumbers, electricians, carpenters and materials suppliers.

‘If they have money in their pocket they can go out and spend it – it’s absolutely crucial.’

Other proposed measures include repairing cladding on audited buildings, funding the removal of asbestos, cutting charges for developers, and increasing the money learning institutions can spend on infrastructure.

According to the report, modelling shows a return of $2.34 for every $1 the government invests in the stimulus package.

The package would generate an estimated $30.9 billion in gross domestic product and create 105,500 construction jobs.

The MBA wants the national cabinet of federal, state and territory leaders, which will meet this week, to consider its stimulus proposal for the industry. 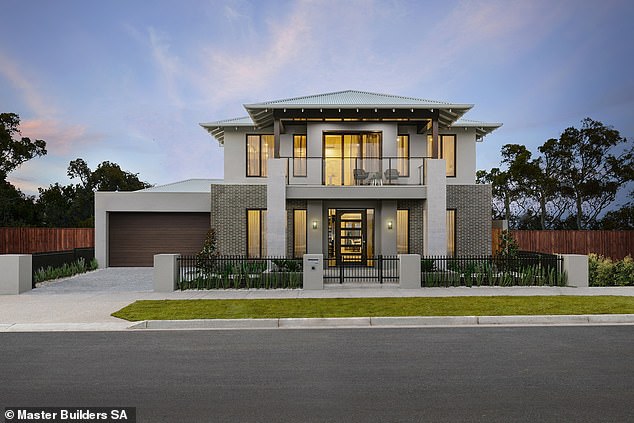 The stimulus package would be for Australians who want to build a new home (pictured: an example of a new home Australians could build with $40,000 on the MBA website)

‘Building and construction is shaping up to be one of the industries worst hit in the long term by the COVID-19 economic crisis,’ CEO Denita Wawn said in a statement.

‘We know from previous downturns that it takes four times longer for our industry to recover than the rest of the economy.’

She also explained work for builders and tradespeople in 2020/21 was already evaporating, and the forecast for 2021/22 looks bleak.

There are about 400,000 building businesses in Australia employing 1.2million people.

On Sunday, Prime Minister Scott Morrison said he would work with unions and industry leaders with job creation plans.

‘The other curve we have to work on is the jobs curve and we need to do things that create jobs. And what I’m interested in doing is working with anyone in this country who wants to work with me to create jobs,’ he said.

‘Any premier, any chief minister, any union leader, any business leader, anyone who wants to work with me to create jobs, we’ve got a partnership.’