New York might see snow while storm expected in Northwest

Is the Northeast set for a White Christmas? New York and Pennsylvania might see a dusting of snow while heavy rains are predicted to bring chaos to the Northwest

New York and other Eastern states could be set for a White Christmas as heavy rain caused by a storm system could wreak havoc in the Northwest.

Around 30 states from coast to coast have at least some snow cover currently, according to latest forecasts.

The next weather system to hit the east is moving over the Great Lakes region and over the Gulf Coast.

By early Monday, the system will move toward the Eastern Seaboard bringing showers to the mid-Atlantic and snow to higher elevations in Pennsylvania, New York, northwestern New Jersey and New England. 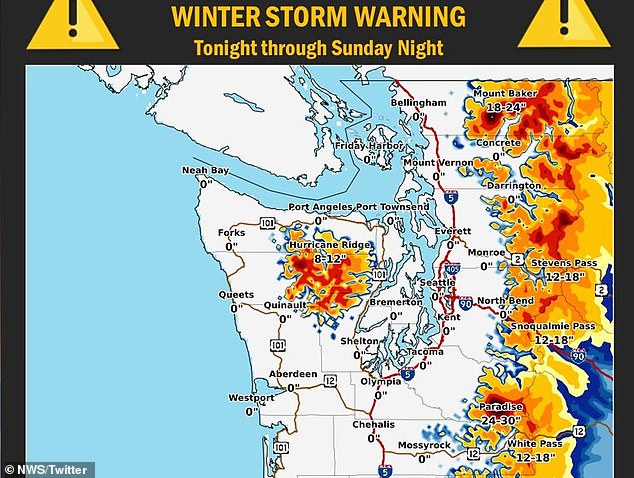 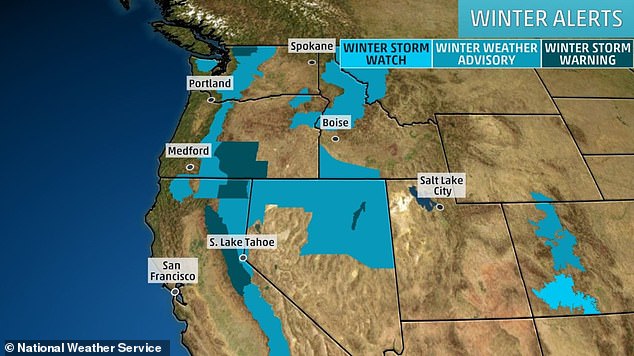 Heaviest snow will occur over the central Sierra and higher terrain of the Great Basin but should begin breaking out over the southern Rockies by Christmas night, the National Weather Service said

The National Weather Service said that ‘light snow accumulations are possible’ in New York and New England on Monday.

‘Light lake-enhanced snow showers through Christmas Eve to the upper peninsula of Michigan and northern lower Michigan’, the forecaster added.

However it will be a different story in the Northwest where a developing storm to bring potential travel trouble over the central US beginning Wednesday, according to the National Weather Service.

The service said that light snow accumulations are possible from the central Appalachians moving into New York and New England through is expected on Monday.

Radar and satellite imagery from Sunday morning show that the first of several rounds of storms is already affecting the area from Northern California all the way up to Seattle.

Moderate to heavy rain showers are the main concern for the lower elevations of Oregon and Washington, while snow is affecting mountainous areas.

Rainfall totals are expected to range from one to three inches through Wednesday. 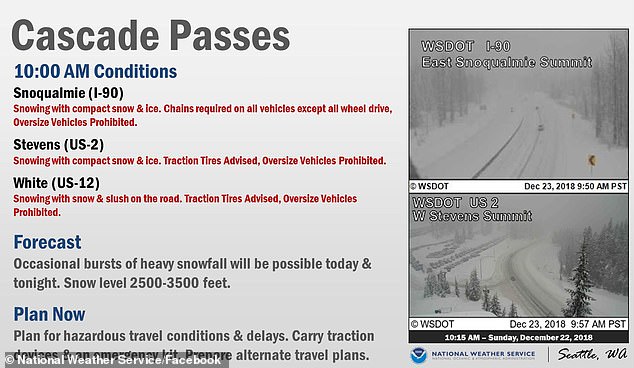 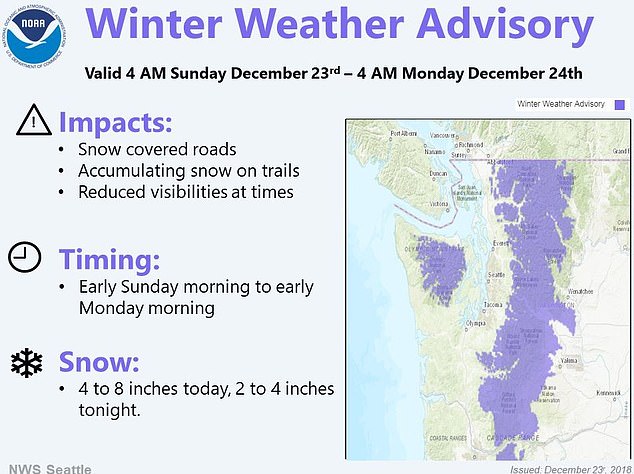 Snow showers will linger in the Rockies on Christmas Day, but the areas west of the mountains that see rain should be dry on Tuesday.

However another system will approach from the west, bringing with it more rain and unsettled weather for the end of the holiday week in the Pacific Northwest.

‘As a result, heavy snow is likely for much of the southern/central Rockies northeastward into the northern and central Plains states, with potentially heavy rain and thunderstorms farther south through the southern Plains.

‘This may result in some post-holiday travel difficulties during the middle of the week’. 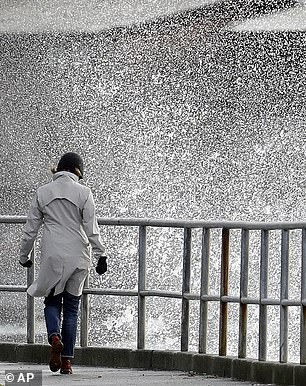 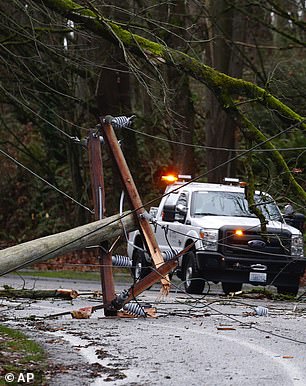 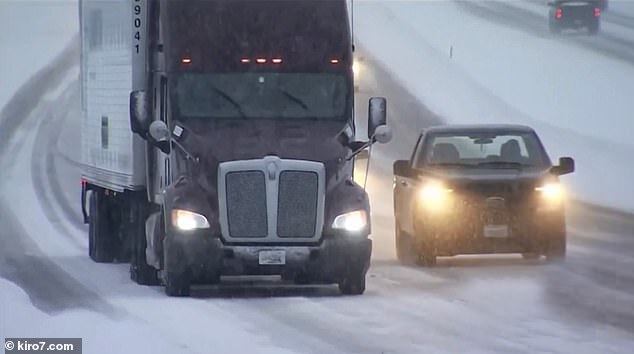 Weather warnings are currently in place for the Cascades and sections of the northern Rockies, with 12 to 24 inches of snow in the Cascade Range passes between the Willamette Valley expected to fall.

Forecasters said the  storm will continue to strengthen as moves into the southwestern US by later Christmas Day.

The exact track may not be distinguishable until the storm first emerges from the Rockies.

But there is a possibility snowfall of at least several inches may extend from northern New Mexico to central and northeastern Colorado to South Dakota, Wisconsin and Michigan.

Cities and major airport hubs that may receive accumulating snow from the storm include Denver and Minneapolis.

‘Increasing winds with the storm are likely to cause extensive blowing and drifting snow and perhaps blizzard conditions on Wednesday and Thursday,’ according to AccuWeather Meteorologist Isaac Longley.