A local fundraising club has defended its decision to don blackface during an annual parade attended by hundreds of spectators.

Members of the Hawera Mt View Lions Club had their faces painted black by schoolchildren before embarking on a float through the streets of New Zealand’s coastal town of Taranaki on Friday night.

Those in attendance slammed the group, calling the act ‘shameful and disgraceful’ on social media.

The club has now hit back at their critics who were being ‘too precious’, saying they were forced to get creative as this year’s event didn’t have a theme.

The group claims there was no theme set for the parade, as there had been in previous years.

So, they decided to implement their own ‘black and white’ theme.

Footage of the float shows six people – including a child – sitting among black and white balloons with their faces painted black.

The child’s face is not painted.

Local woman Debbie Ngarewa-Packer was among the first to share a photo she had taken to social media, accompanying it with the words: ‘Tonight’s Hawera parade…showed blackfaced racists are well and truly alive!’

She deemed the attire as ‘pro slavery’ and likened it to black minstrels, the caricature-like show from the 1800s from which the offensive face paint originated.

Her sentiment was supported by many online, one of whom said it was a ‘step back in time in the wrong direction’.

But the club’s Facebook page defended their decision, writing that the disdain was overbearing political correctness.

‘This is by no means meant to be derogatory as a racist commentary rather a celebration of all cultures,’ the club wrote in their defence.

‘What if these person (sic) had been dressed up representing Maori wabine and warriors. Would that have been offensive too?’ 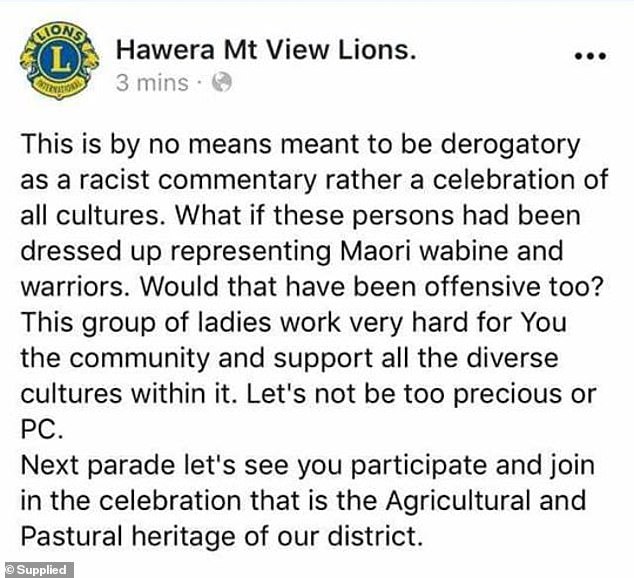 The club responded to their critics online, saying they should not be ‘too precious or PC (politically correct)’

‘This group of ladies work very hard for you the community and support all the diverse cultures within it. Let’s not be too precious or PC.

‘Next parade let’s see you participate and join in the celebration that is the Agricultural and Pastural (sic) heritage of our district.’

Ms Ngarewa-Packer replied again, suggesting that the club was telling the community ‘don’t be precious, be racist instead’.

Shortly after the club’s response was published, screenshot and ridiculed online, the post was deleted.

About 20 minutes later, an apology was posted, claiming their intent was never to ‘upset the community’.

Their page was later deleted altogether.