New Zealand student, 23, sheds half his bodyweight by going vegan and exercising si times a week

An obese shop assistant who suffered 10 seizures a day and tipped the scales at 190 kilos has shed half his bodyweight in 18 months by adopting a plant-based diet and exercising six days a week.

Jacques Robinson had always been a ‘bigger guy’, but it wasn’t until he left school and started his first job stacking shelves in a supermarket that his weight really spiralled out of control, ballooning to 160 kilos in the space of 12 months.

Life changed forever in the early hours of April 8, 2016, when the 19-year-old collapsed after suffering a seizure on the side of a road while walking to a 3am shift in the centre of Warkworth, north of Auckland on New Zealand’s North Island.

New Zealand supermarket assistant Jacques Robinson in 2016 (left) and 2020 (right), after shedding half his bodyweight with the help of a plant-based diet and almost daily exercise

Bedridden by excruciating pain and debilitating headaches, Mr Robinson sought comfort in takeaway pizzas, chocolate and cheesy meat pies until he tipped the scales at 190 kilos.

He hit rock bottom one morning in late 2018 when the scales he had been weighing himself on read ‘error’ due to the enormity of his size, a sight that made his ‘stomach sink’ and pushed him to transform his lifestyle once and for all.

Now 23, Mr Robinson weighs 96 kilos and feels better than ever after adopting a vegan diet and almost daily workouts, with a combination of cardio, weight lifting and high-intensity interval training.

Before his transformation, Mr Robinson believed he would be ‘single forever’, but his newfound confidence means he is looking forward to dating once social distancing restrictions permit. 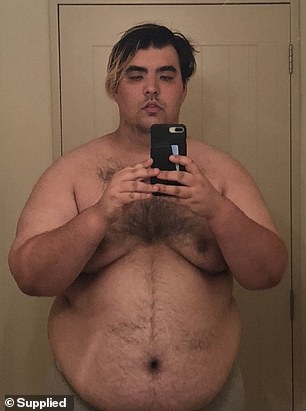 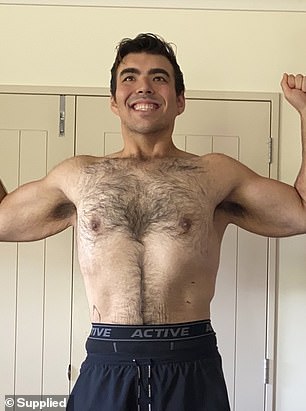 Mr Robinson told Daily Mail Australia he had reached ‘burnout’ point when he lost consciousness on his way to work in 2016.

He woke hours later in a hospital bed, wracked with pain and no memory of what had happened.

Doctors revealed he had suffered a seizure, the first in a string of serious health issues that would debilitate and dominate his life for years to come.

In the first year of his illness, Mr Robinson experienced up to 10 seizures a day and battled ‘crushing’ headaches which saw him hospitalised an average of seven times a month, before he was prescribed a cocktail of 30 daily pills that kept the migraines at bay.

‘In the first year alone I had 80 hospital trips. The two seizures and headaches combined, and that’s how I spent my life for at least three years,’ he said.

The cause of Mr Robinson’s seizures is still unclear, with dozens of scans and blood tests returning negative results for common triggers like stroke, cancer and epilepsy.

Mr Robinson’s day on a plate

With his body turmoil, Mr Robinson became consumed by shame and self-loathing so intense, he began to experience suicidal thoughts.

‘I was always doubting myself and I could see no future. There were times when I got so low and depressed, I just wished I was dead,’ he said. 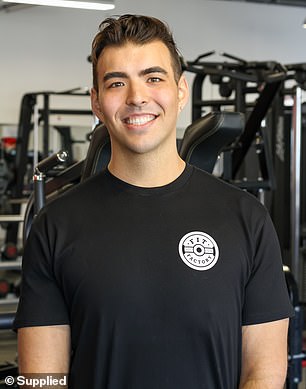 He shunned social gatherings and retreated inside his own ‘bubble’, snacking on egg and bacon rolls, energy drinks and takeaways for comfort.

‘I felt ashamed to be in the body I was in…I just kept thinking how I was going to spend the rest of my days a total mess and die by 30.’

At his heaviest, Mr Robinson’s energy was so depleted that he was bedridden for days at a time. On many occasions, he even struggled to open his eyes.

The average weight for a 20 to 39-year-old man is 89 kilos, according to body mass calculations from Healthline. Mr Robinson weighed well over twice that figure at 190 kilos.

Three years after his first seizure, he resolved that ‘enough was enough’ and set himself a goal of losing 40 kilos over the following year – a target he reached in just five months.

He started slowly, walking on the treadmill for an hour in the morning before adding a second walk in the afternoon towards the end of the first month.

He adopted a plant-based diet consisting of 90 percent vegetables and fruit and 10 percent eggs and white fish, and within weeks noticed ‘significant’ improvements in his weight, strength and mental outlook.

‘I’ve never looked back. My body has thanked me so much for making this lifestyle change,’ he said. 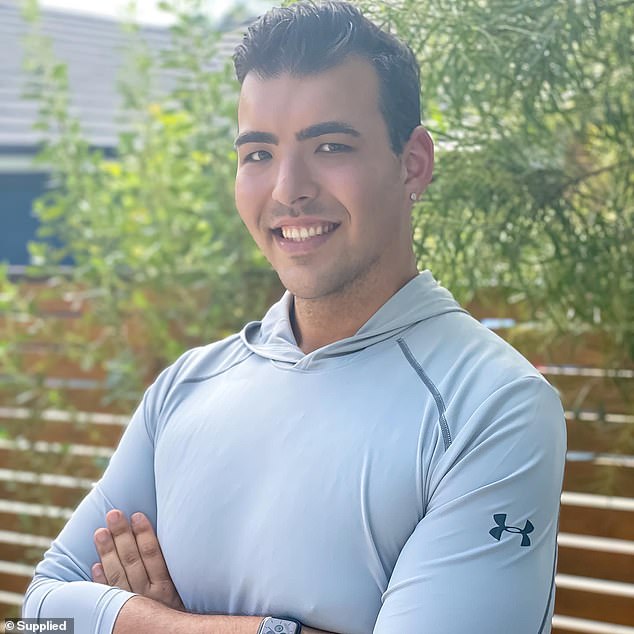 Mr Robinson in 2020 after his 94 kilo weight loss, which has given him newfound confidence and self-worth

After surpassing his 40 kilo goal in less than half the time he had anticipated, Mr Robinson felt comfortable enough to join a gym and hired a personal trainer to help him navigate the unfamiliar territory of weights areas and cardio machines.

He now exercises six days a week plus an hour of power walking in the evening.

Mr Robinson has become so passionate about health that he is now studying to become a fitness coach trainer to help others achieve their weight loss goals.

‘When you have a lot of weight to lose, it’s daunting,’ he said.

‘I’m living proof that you can transform your heath with hard work, dedication and lifestyle changes. Anything is possible and it lies in our own hands.