The Austin Police Department released the long-awaited footage of the moment officers shot dead a Texas man who announced he was unarmed and had his hands above his head before the incident.

Police body camera and cruiser in-car camera system footage have finally been  disclosed by authorities after they missed their own June deadline to provide details about the death of Michael Ramos.

A 911 audio call included in the video reveals that an unidentified resident called police to the Oak Valley Apartments in South Central Austin around 6:30pm.

The caller says that a couple was sitting inside a parked car while either ‘smoking crack and cooking meth.’

The unidentified caller also said the man, later identified as Ramos, was pointing his gun at the woman while in the car – despite authorities later finding no weapon at the scene.

Provided footage then shows eight officers, including Officers Christopher Taylor and Mitchell Pieper, meeting outside the apartment complex to discuss their plan before dispatching to the call.

‘Don’t try to pin them in. If they got a gun, I don’t want to do that,’ said one officer, adding that some of them would be armed with a rifle.

Officers note that they’ve been searching for a reported stolen car that that was similar to the Prius Ramos was driving.

The police cruisers enter the apartment complex in a line before two cars drive next to Ramos’ parked Prius and immediately engage with him.

At the demands of the officers, Ramos exits the Prius and raises his hands above his head per their instructions.

‘Michael Ramos, you’re going to get impacted if you don’t listen,’ one officer says.

Ramos, who is visibly anxious and appears confused, complies with officers’ orders to lift up his shirt and turn towards them. 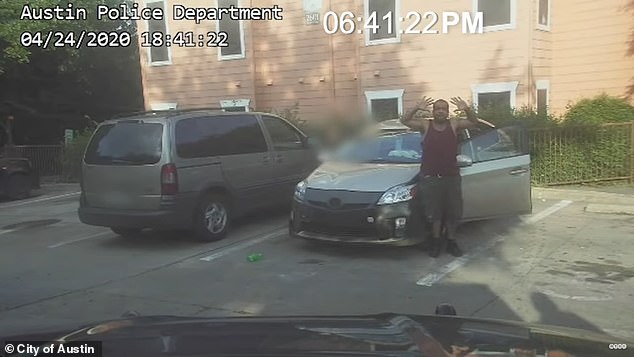 ‘Man, you all scared the f*** out of me, dog,’ says Ramos, who exhales and lowers his hands to high brow.

Ramos then tells officers ‘don’t shoot’ several times as officers continue to tell him to turn around.

He begins to question why officers approached him and why weapons have been drawn.

‘What’s going on, man?’ Ramos shouts, as officers aim their guns at him.

‘I’ll explain it in a second,’ one officer says. ‘I can’t explain it right now, Michael.’ 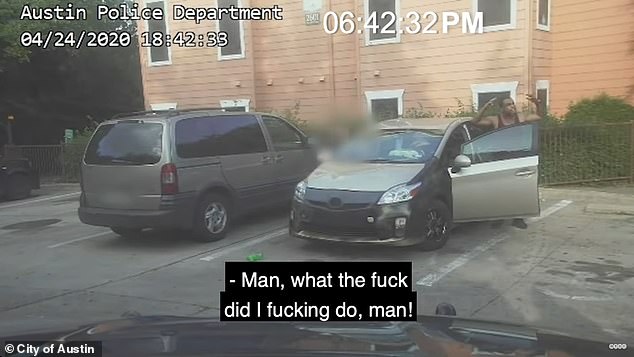 Ramos (pictured) asked officers several times why their guns were drawn at him, but officers did not appear to give him an answer

Meanwhile, one officer out of the camera’s view appears to be coaching a colleague to deploy the impact device.

‘Impact. … Take a deep breath, reposition to the right side of that car. … Impact him. Impact him!’ the voice is heard saying,

Ramos begins to refuse officers demands to walk towards them, prompting one officer to shout ‘I’m going to impact you.’

Suddenly, Officer Mitchell Pieper fires a beanbag at Ramos’ stomach and he quickly gets back into the Prius to flee the scene.

As the car begins to peel away, Christopher Taylor fires at least three shots at the car and fatally strikes Ramos.

The Prius swerves into another parked car and authorities, still armed, move towards the vehicle. 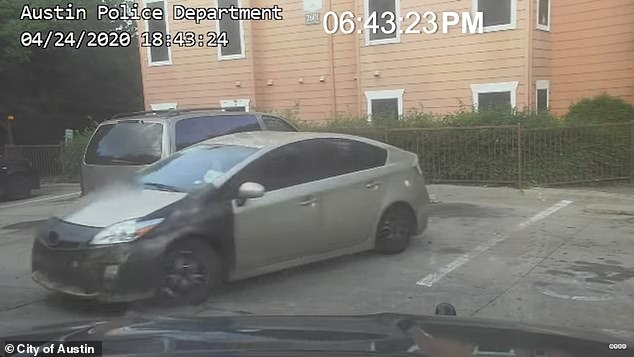 After being hit with a bean bang impact, Ramos attempts to drive away when Officer Christopher Taylor fires his rifle three times into the car

The provided video then switches to show Taylor’s police body camera footage to show a different angle of the incident.

Much of that footage is blocked by Taylor’s arms, which are positioned in front of the camera as he holds the firearm.

The video ends with the Austin Police Department saying ‘Officer Pieper fired one less-lethal round at Mr. Ramos, striking him in the upper thigh, hip area.

Officers at the scene requested Emergency Medical Services and performed life saving measures that would ultimately not work. 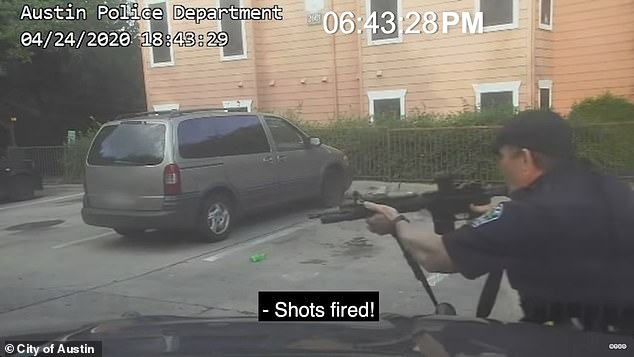 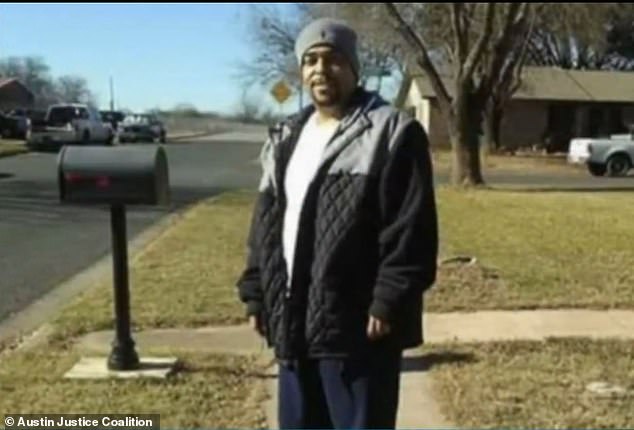 The Travis County Medical Examiner is currently investigating Ramos” death and will make a final determination to manner, as well as cause, of death.

A female passenger with Ramos before the police-involved shooting was not injured and was not charged with any crimes.

Both Officers Taylor and Pieper have been placed on administrative leave after an investigation was launched into the shooting.

Pieper had been with the Austin Police Department for three months and was in the field training phase at the time of the shooting.

Taylor has been with the department for five years and it was the second time in less than a year that Taylor used lethal force, The Statesman reports.

Word of Ramos’ death first made headlines after a video of him being hit by the bean bag while his hands were up reached social media. 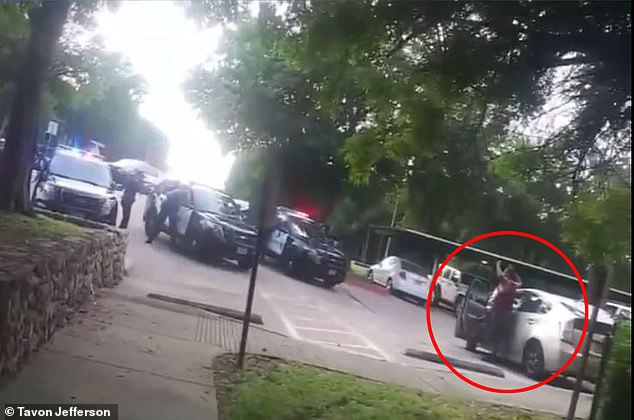 Pictured: another view of body camera footage shows the other side of the incident that took place in April

As a result, the Austin Police Department opened an internal investigation that is being monitored by the Office of Police Oversight in an effort to show transparency with the community.

But a criminal investigation is being conducted by the Special Investigations Unit and the Texas Rangers with Travis County District Attorney’s Office.

Attorney Scott Hendler, who represents the Ramos family, said the newly released police footage did not change his mind about the incident.

‘Nothing I saw in the videos has changed my opinion that the shooting was unjustified and that Michael Ramos was not a threat – to officers, to himself or anyone else,’ he told The Statesman.

‘I don’t think the videos provide any justification for the shooting, Nothing append that was caught on video rise to the reason to open fire on Michael Ramos.’

An attorney representing Taylor previously objected to the video’s release over claims it could impede a fair trial.

‘What the video doesn’t capture is what the officers perceived, what they felt, and their own vantage point and what they knew prior to going into this incident,’ said Ken Ervin, another attorney for Taylor. 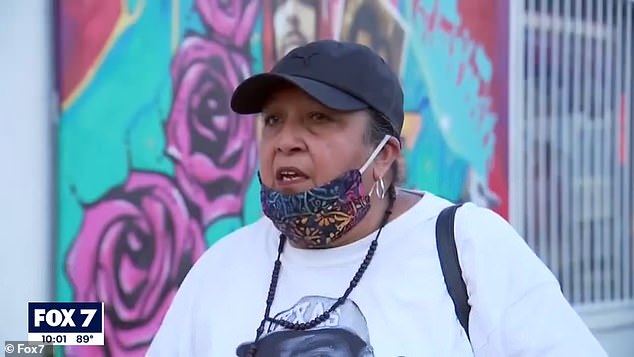 Brenda Ramos (pictured): ‘I’ll never forget the face he made when he was confused. That’s what staying on my mind and I feel him and that hurts’

‘I would say they did everything possible to try to minimize the danger to both themselves and to Mr. Ramos, all the other civilians who were at the apartment complex,’ said O’Connell.

‘It was really a difficult situation. It’s tragic how it ended, but it certainly wasn’t the fault of any of those officers.’

Last week,Travis County District Attorney Margaret Moore said she would not present the case to a grand jury before the end of her term.

Instead, the case will passed along to the next district attorney after Moore lost a recent runoff election.

The Austin Police Department implemented a new policy, similar to the Los Angeles Police Department, that now requires video of police-involved shootings must be released within 60 days of the incident.

Brenda Ramos, who has demanded Taylor be fired, told Fox 7 in recent interview that Moore’s decision to hold off on the case was ‘ very disrespectful.’

‘It hurt me for her to be in her position and say that,’ said Ramos, adding that she has seen the bodycam footage of her son’s death.

‘I’ll never forget the face he made when he was confused. That’s what staying on my mind and I feel him and that hurts. That’s a part of me,’ she said.