A Wisconsin man was struck down with a rare polio-like illness just days after he got married.

Adam and Bridget Spoerri, from Burnham Park, were on their honeymoon in late July on Lake Superior when both of them came down with a cold.

Bridget’s symptoms improved, but Adam’s didn’t. Within a week, his facial muscles became paralyzed, he could not swallow and he was struggling to breathe.

He was rushed to Aurora St Luke’s Medical Center where doctors diagnosed him with acute flaccid myelitis (AFM).

Adam is currently the only adult in Wisconsin to come down with the illness that so far affected 89 others in 27 states, according to the Centers for Disease Control and Prevention.

Adam and Bridget Spoerri, from Burnhan Park, Wisconsin, fell sick while on their honeymoon in July, just days after getting married (pictured). Bridget’s symptoms improved but Adam’s did not 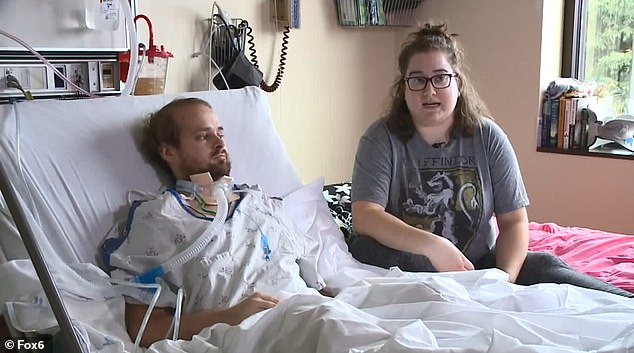 Adam gradually became paralyzed and struggled to breathe. In September, he was diagnosed with acute flaccid myelitis. Pictured: Adam and Bridget in the hospital

AFM is a rare, but serious condition that affects the nervous system. Specifically it attacks the area of spinal cord called gray matter, which causes the body’s muscles and reflexes to weaken.

Symptoms often develop after a viral infection, such as poliovirus or West Nile virus, but often no clear cause is found.

Patients start off having flu-like symptom including sneezing and coughing. This slowly turns into muscle weakness, difficulty moving the eyes and then polio-like symptoms including facial drooping and difficulty swallowing.

Adam was diagnosed with AFM in Septmeber, which his family believes he was at risk for because of the immunosuppressant drugs he was taking for asthma and Crohn’s disease.

‘His head became very weak. He could not swallow and then his breathing was very labored,’ Bridget told Fox 6.

‘He’s still flaccid in his shoulders, his back muscles, his neck is pretty weak.

According to a GoFundMe page that was set up by family friends of the couple, Adam is still not able to speak and the couple have been communicating via a notepad.

‘I thought he was dying every day those first two weeks. I had no hope,’ Bridget told the Journal Sentinel. 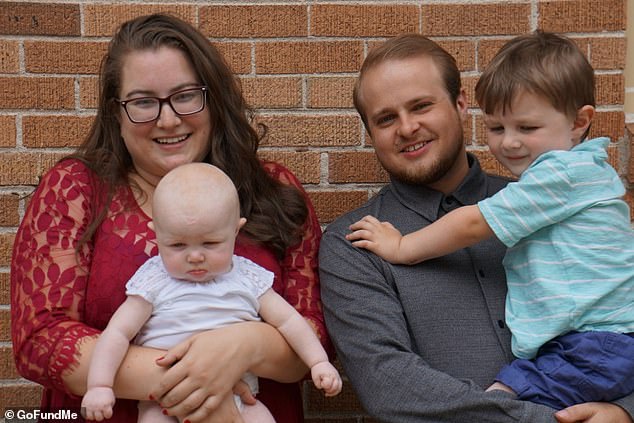 Adam is currently the only adult in Wisconsin to come down with the illness that so far affected 89 others in 27 states, according to the Centers for Disease Control and Prevention 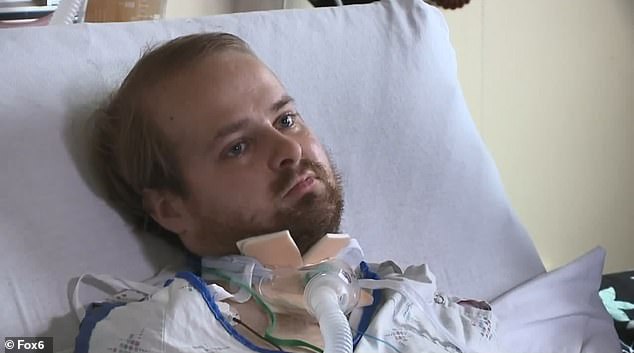 The 30-year-old (pictured) has been transferred to the Post Acute Medical Specialty Hospital, a long-term care facility in Milwaukee, for rehabilitation

The Centers for Disease Control and Prevention (CDC) does not track AFM in terms of its prevalence, but rather in outbreaks.

The agency has confirmed 362 cases since an outbreak in Colorado in August 2014, almost all of them in children.

This suggests the pattern of an infectious disease, but much remains unknown about the condition.

Currently, doctors are working to wean Adam off the breathing ventilator he’s been on since August. According to the Journal Sentinel his record is more than 34 hours.

Adam has been transferred from Aurora St. Luke’s Medical Center to the Post Acute Medical Specialty Hospital, a long-term care facility in Milwaukee.

However, it remains unclear how long he will be there for the recovery process.

‘Adam and his wife have shown such strength through this entire illness,’ Taylor Finseth, Adam’s neurologist at Aurora St Luke’s told the Journal Sentinel. ‘

‘They really amaze me. The love that his wife shows for him is incredible.’