Nigel Farage says he could run for London mayor

Nigel Farage has revealed he is considering running to be London Mayor in a bid to oust Sadiq Khan from City Hall.

The former Ukip leader said he is confident he would push the Tories into third place if he ran in the 2020 election.

The leading Brexiteer said he is being urged by a group of friends to throw his hat into the ring for the next contest.

He told The Financial Times: ‘I have been encouraged to stand by a group of people, but that doesn’t mean I’m going to.

‘I haven’t said no to it, I’m thinking about it.

‘The Tory party are very actively aware that if I did stand, they would probably come third, and they are afraid of that.’

If Mr Farage does decide to run it is likely to be very controversial, as the capital voted overwhelmingly to stay in the EU – with 2.3 million people backing Remain over the 1.5m who voted for Brexit. 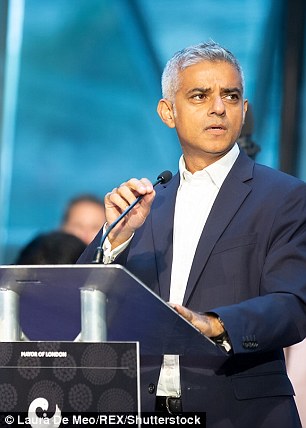 But the number of Londoners who backed Brexit is still higher than the 1.3m who voted Mr Khan into office in 2016.

Mr Farage, a close friend of Donald Trump’s, also tore into Mr Khan for his long-running feud with the US leader.

He said: ‘I’d never thought I’d see the day where the murder rate in London would overtake that of New York.

‘I wonder whether Sadiq Khan should spend a bit less time slagging off Donald Trump and a bit more time getting to grips with crime in London.

‘Clearly we have a really bad problem.’

The Tories are selecting their candidate next month with City Hall representatives Shaun Bailey and Andrew Boff, and Ealing councillor Joy Morrissey in the running.

Only three people have been London Mayor since the position was created in 2000 – Ken Livingstone, Boris Johnson and Sadiq Khan.

Mr Farage announced earlier this summer that he will make a comeback to frontline politics. He has accused Theresa May of betraying the British people by coming up with her Chequers plan.

He is to travel around the country attacking the Chequers proposal which he describes as ‘fraudulent’.

It comes as former leading members of Ukip are urging members of the party to leave and sign up to the Tories instead to oust Mrs May and force through a harder Brexit.

The move has sparked a row in the Tory party as Conservative officials have warned local associations not to sign up new recruits who risk bringing the party into disrepute.

But some Tory MPs have warned that it is ridiculous for the party to turn away new recruits and this risks fuelling division and distrust.