Nike denied claims that it had pulled Kobe Bryant merchandise from its website  insisting stock had sold out following the basketball legend’s death on Sunday.

The sportswear giant said fans would be unable to purchase Kobe-related branded jerseys, sneakers or other branded clothing online.

A company source told ESPN earlier that Nike had removed items to prevent resellers from inflating prices when flipping the goods at a later date.

Contradicting ESPN, a Nike spokesman told Forbes that the items were withdrawn from the online site as they had sold out.

Searches for ‘Kobe Bryant’ on Nike’s page send the user to one product, a purple and yellow colored gift card, redeemable once stocks refill.

Related searches are re-directed to Nike’s memorial page which reads: ‘Along with millions of athletes and fans throughout the world, we are devastated by today’s tragic news. We extend our deepest sympathies to those closest to Kobe and Gianna, especially their family and friends.’ 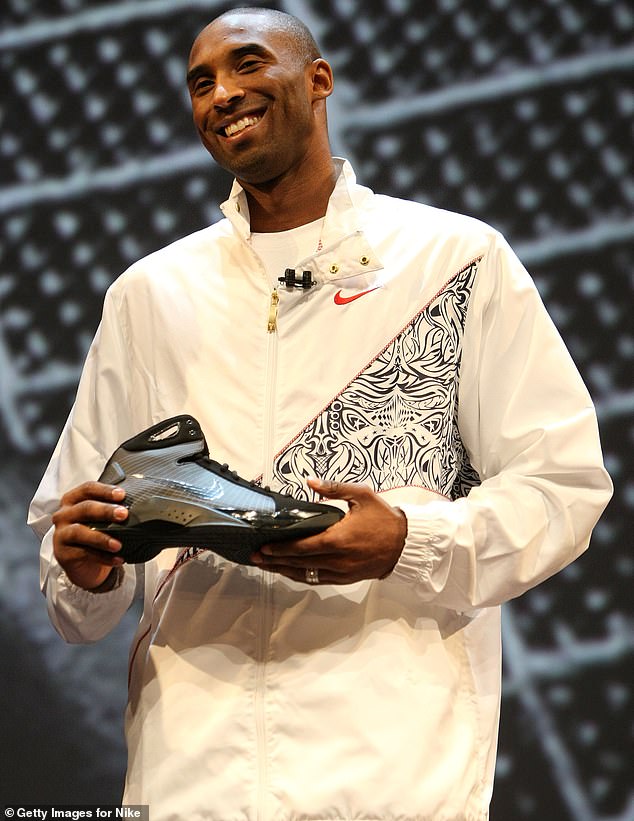 Kobe Bryant of the Los Angeles Lakers poses with the newly unveiled Nike Hyperdunk shoe at the Nike Beijing 08 Innovation Summit on April 7, 2008 at the Tiger Woods Center on the Nike Campus in Beaverton, Oregon

‘As we are learning more details of the accident and the others who have tragically lost their lives, our heartfelt sympathies go out to everyone involved and impacted.

‘Kobe was one of the greatest athletes of his generation and has had an immeasurable impact on the world of sport and the community of basketball. He was a beloved member of the Nike family. We will miss him greatly. Mamba forever.’

The range is still available in retail outlets like Footlocker and the Nike Store.

Las Vegas-based Urban Necessities pledged to ensure prices on Kobe products did not change ‘out of respect for his family and legacy’. 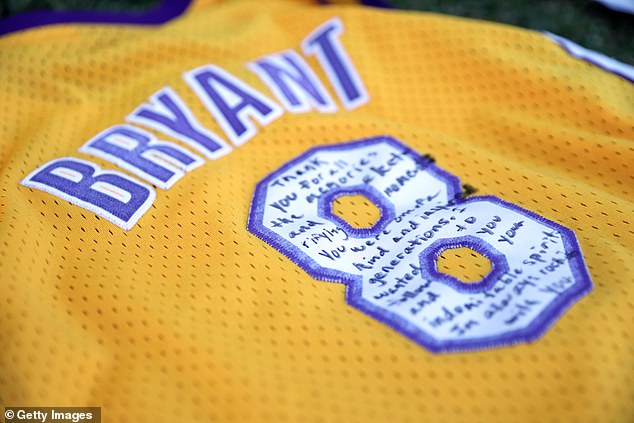 : A detail of a jersey left at a memorial at Juan Bautista de Anza Park in Calabasas, California. NBA champion and a two-time Olympic gold medalist Kobe Bryant, 41, his daughter Gianna and 7 others, died in a helicopter crash on January 26, 2020

Bryant, 41, was one of nine people killed Sunday when the helicopter they were traveling in crashed in Calabasas, California. His 13-year-old daughter, Gianna, also was among those who perished.

According to Forbes, Nike are set to a release a new colorway of Bryant’s Kobe 5 Protro sneaker on February 7, 2020 but are considering holding off for now.

According to ESPN, more than 100 NBA players have worn Bryant shoes this season.

It’s not unheard of for companies to withdraw products from their sites when they’ve run out, a sports industry adviser, Matt Powell, told Forbes.

StockX, a reseller of sports merchandise, said they would be donating all proceeds from Kobe sales this week to the Kobe and Vanessa Bryant Family Foundation. 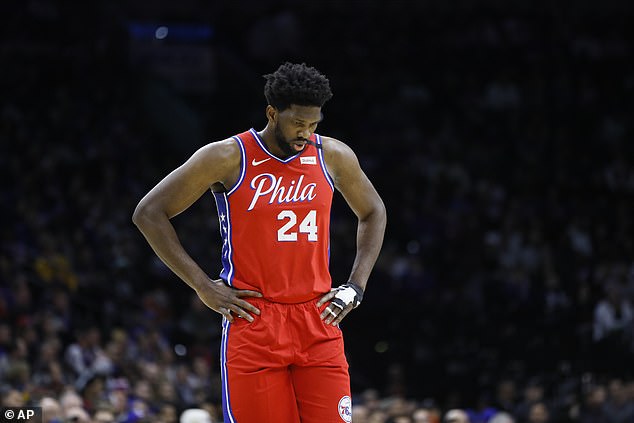 In Philadelphia, Joel Embiid paid tribute to Bryant by wearing No. 24 during Tuesday’s game

In the wake of Bryant’s tragic death, several NBA players have already switched their uniform numbers away from his No. 8 and No. 24 in an informal effort to retire the Los Angeles Lakers legend’s jersey around the league.

Brooklyn’s Spencer Dinwiddie and Orlando’s Terrence Ross are showing their respect by no longer doing so.

Boston’s Kemba Walker is also considering such a change, although the team has already retired 22 numbers.

In Philadelphia, Joel Embiid paid tribute to Bryant by wearing No. 24. 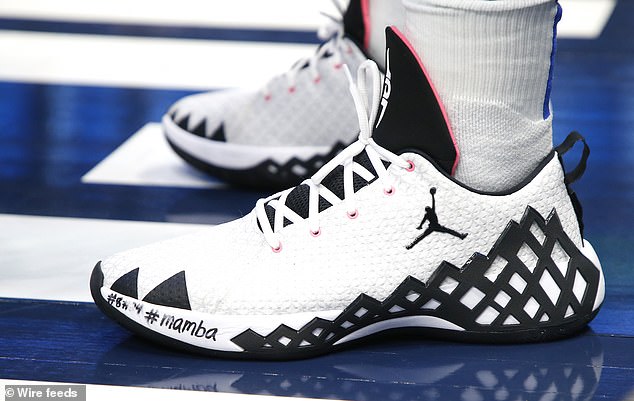 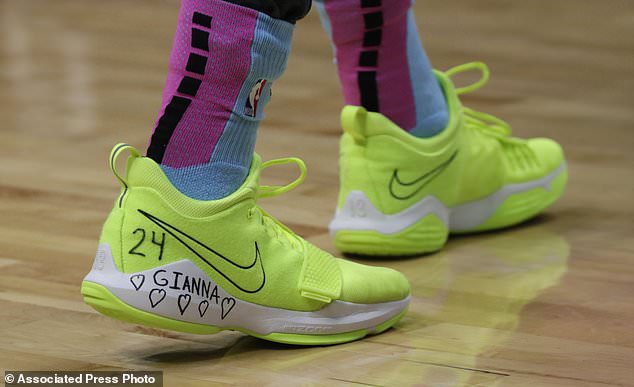 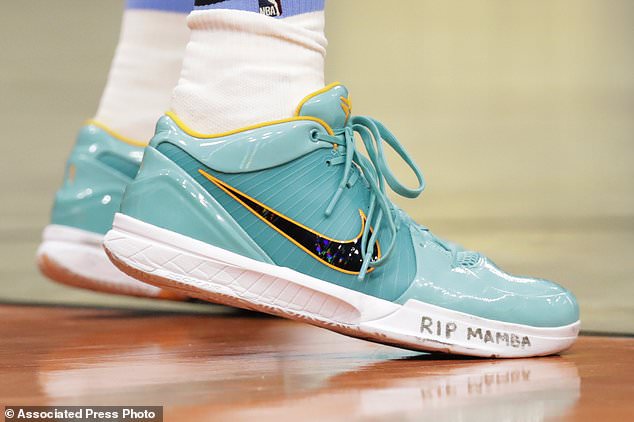 Cleveland Cavaliers’ Dante Exum’s shoes reference Kobe Bryant during the second half of the team’s NBA basketball game against the New Orleans Pelicans, Tuesday, Jan. 28, 2020, in Cleveland. Bryant, his 13-year-old daughter, Gianna, and six other passengers were killed along with the pilot in a helicopter crash Sunday. (AP Photo/Tony Dejak)

And coaches around the league left their snazzy leather shoes in the office Tuesday night, wearing Bryant’s signature sneakers instead.

The games are going on — except in Los Angeles, for a couple more days anyway. So, too, is the grief after the fiery helicopter crash in Southern California on Sunday that took the life of Bryant, his daughter Gianna and seven others.

And the tributes are continuing as well, such as the separate decisions by Dinwiddie and Ross to no longer wear the No. 8 that Bryant donned at the start of his NBA career.

Thousands of people reportedly stopped by and gathered throughout the day Monday at a 35-foot poster of Bryant at Nike World Headquarters in Beaverton, Ore. At Nike’s regional office in Los Angeles, employees gathered in the office’s auditorium, named ‘Kobe.’

Also on Monday, the NBA announced that the game between the Lakers and Los Angeles Clippers at Staples Center scheduled for Tuesday has been postponed and will be rescheduled at a later date.