Nine cases of black bears missing their front legs have been confirmed in North Carolina, with five of these bizarre occurrences reportedly happening near the city of Arden.

Help Asheville Bears, a nonprofit organization raising awareness about the strange incidents, has been documenting the worrisome phenomenon and sharing news updates with local residents on Facebook.

The most recent case was confirmed on Thursday, according to WBTV.

Nine confirmed cases of three-legged bears have been spotted around North Carolina, with five cases coming from the Arden area 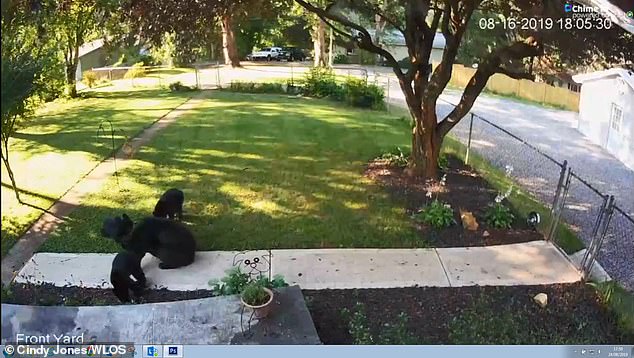 In a videos shared by News ABC 13, a mother bear with a missing front leg is seen in a residential area with her two cubs

Residents in North Caroline are concerned for the bears, sharing videos of three legged bears and their cubs with local news station News ABC 13.

In the video, a mother bear can be seen with her two cubs near a residential area visibly limping and missing one of her appendages.

Justin McVey of the North Carolina Wildlife Resources Commission told News ABC 13: ‘We have more bears. Our population has been increasing.’

Wildlife officials say a possible cause for the injured bears may be human interaction.

McVey told News ABC 13: ‘Bears get hit by cars all the time, and unfortunately bears with three legs is not uncommon. They adapt very well, and they can live a successful life, even with just three legs.’ 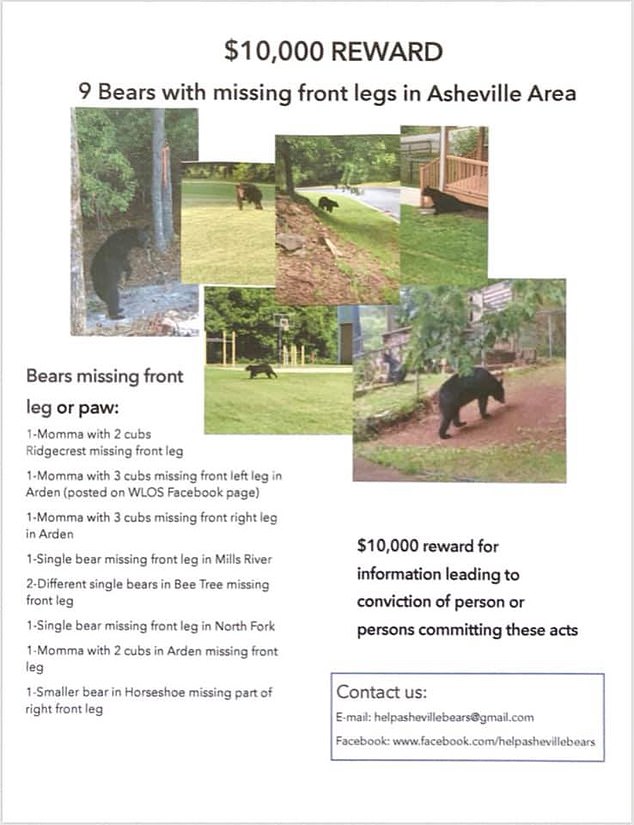 Advocacy group Help Asheville Bears believe the bizarre occurrences may be because of bear traps, despite wildlife officials saying it is bears being hit by cars

In a Facebook post, the group wrote: ‘With the 9 bears that we have confirmed are missing part of a front limb but having no other noticeable injuries in the counties of Buncombe and Henderson, we at Help Asheville Bears still do not accept the theory that the causes are most likely auto accidents involving bears (implying also that the bear then walks off and loses their front leg).’

They wrote: ‘After just a few minutes of searching, we found several traps for sale online that are capable of taking a bear’s leg off or doing great harm to the leg where the bear would be forced to remove it’s own leg to escape from the trap.’

One such trap is called ‘The Knife,’

They report receiving four reports of bear traps in the area and are encouraging residents to notify the Law Enforcement and Wildlife.

In a poster updated on August 24, Help Asheville Bears outlines all the confirmed incidents, including those of mother bears and cubs. 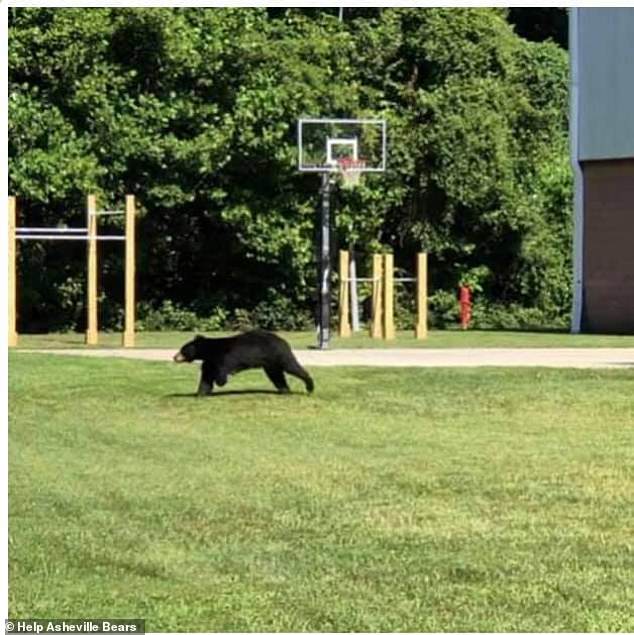 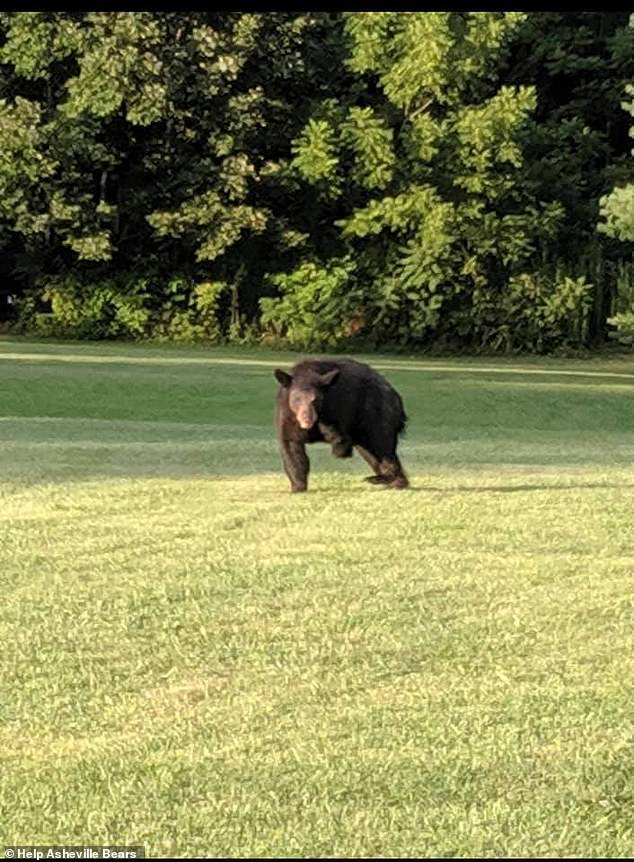 Help Asheville Bears says bear traps like ‘The Knife’, capable of severing bear’s legs, could be the cause 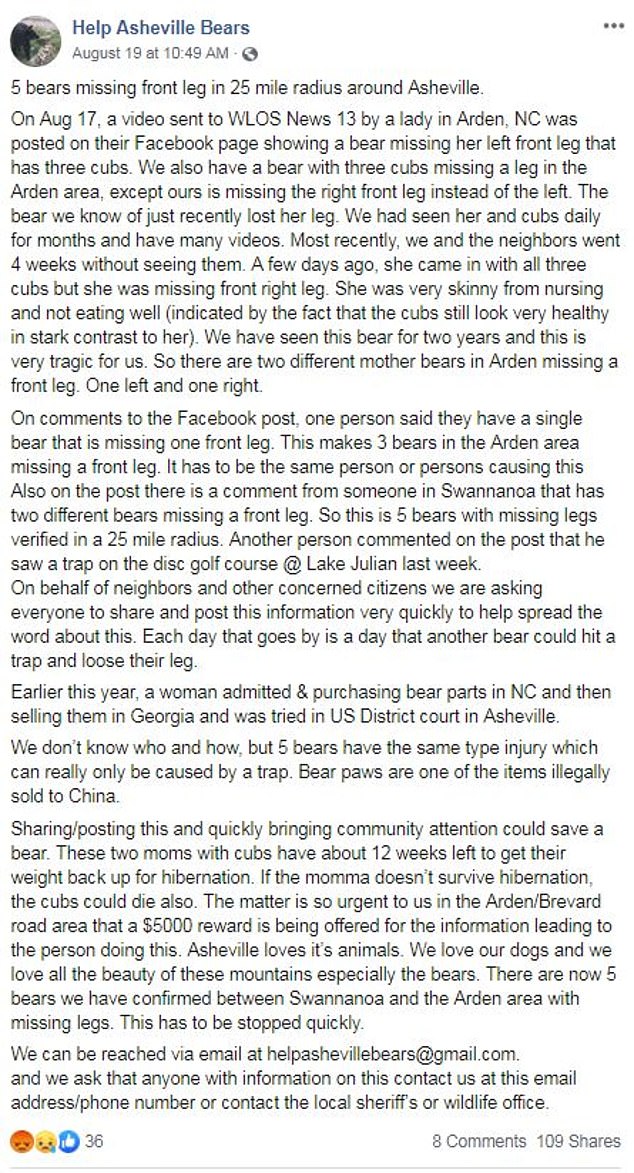 Help Asheville Bears is offering a $10,000 reward for any information on the alleged suspects committing these crimes

Still, wildlife officials say the cause is most likely car accidents and the bears are relatively fine after the ordeal.

‘They will generally kind of move away from people, get to a quiet place, rest and recuperate. Generally those wounds will heal on their own, and then they’re able to go out and live a normal life,’ McVey told ABC 13 News.

Help Asheville Bears is offering a $10,000 reward for anyone with information that could lead to the identification and conviction of the suspects committing the alleged acts.